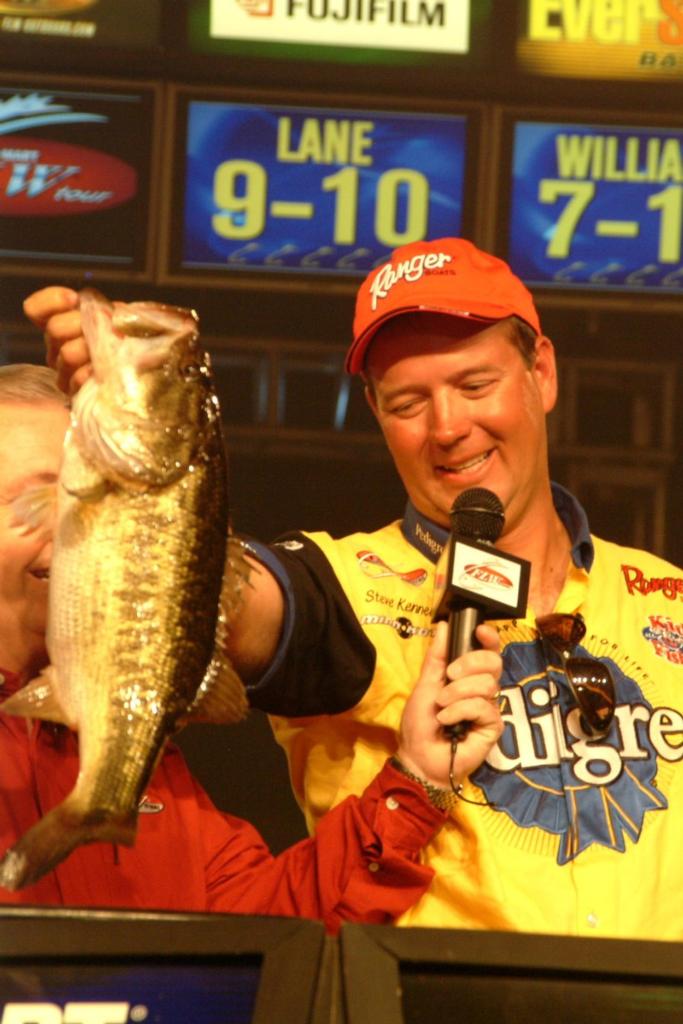 CLEWISTON, Fla. – Day-two leader Steve Kennedy of Auburn, Ala., knew that he’d need some magic in the waning moments of Friday’s competition if he were to have a legitimate shot at a tournament title. As luck would have it, he got it. Although the alarm clock in his head was telling him that he needed to start heading back to shore in order to stave off any late-arrival penalties, Kennedy decided to make one last cast. As it turns out, it might have been the best decision of the entire tournament.

“In the last 15 minutes, I made one Hail Mary cast,” Kennedy said.

As soon as the bait hit the water, Kennedy felt a lunker latch onto to his lure. After an epic on-the-water battle, Kennedy reeled in a healthy 6-pound-plus largemouth – giving him a fantastic semifinal catch of 17 pounds, 4 ounces. The fish not only strengthened his chances of winning the title, it put Kennedy in the lead.

“That was my only big bite of the entire day,” said Kennedy, with a sigh of relief. “Yesterday, I had almost 26 pounds by 1 p.m. Today was a lot tougher. I’m just happy to be in the lead. It’s pretty awesome.”

By the same token, Kennedy knows the battle is far from over.

“Do I look nervous? I am nervous,” said Kennedy, who targeted grass lines in the Monkey Box area of Lake Okeechobee with a craw and 1-ounce weight for most of the day. “Anybody can come in with a 30-pound bag tomorrow. So this tournament is far from over.”

While the tournament is still up for grabs, Kennedy said he’d like nothing more than to capture his second FLW title.

“I’d love to have that second one under my belt,” he said. “It’s going to be interesting.”

Using a total catch of 16 pounds, 13 ounces, Dean Rojas of Grand Saline, Texas, made sure to stay as close to the top of the leaderboard as possible.

“All you can ever ask for is to get into the top 10 and give yourself a chance,” said Rojas, who only trails Kennedy by 7 ounces. “These anglers on the FLW Tour are some of the best in the world. Tomorrow, it’s just going to be a matter of getting those big bites.”

Rojas – who is flipping grass mats in the Monkey Box area – said that he’d love to walk away with the tournament title, one of the few achievements he’s yet to accomplish in his illustrious angling career.

“Last year I had three top-10 finishes on the FLW Tour, so I’d really like to finally win one of these things,” Rojas said. “I’ve been so close so many times. I really want to win. But all I can do is go out there and do my best. Everything happens for a reason. We’ll just have to see what happens.”

Bolton surges up the leaderboard

Terry Bolton of Paducah, Ky., kept the frontrunners within his sights after netting a catch of 14 pounds, 10 ounces.

“I feel pretty good, but I didn’t get as many bites as I wanted,” Bolton said. “The water I’m fishing is getting dirtier. Tomorrow, I’m just going to go out there and go fishing. Coming into this tournament, I was very apprehensive. But for whatever reason, I’ve been pretty calm all week. So far, I’m having a great time.”

Bolton said that he’s fishing the southern part of the lake, targeting eel grass and hydrilla with a War Eagle spinnerbait.

“Yesterday the big bass really started biting,” he said. “The key is, who is going to get those big bites tomorrow?”

Greg Pugh of Cullman, Ala., found himself in fourth place after landing a catch of 10 pounds, 13 ounces in Friday’s semifinals.

“The area I’m fishing, I pretty much have all to myself,” he said. “I’m throwing fast-moving baits. But the problem was that today I just didn’t get the big bites.”

Day-one leader Bobby Lane of Lakeland, Fla., used a catch of 9 pounds, 10 ounces to finish the day in fifth place.

Rounding out the top 10 finalists are the following: