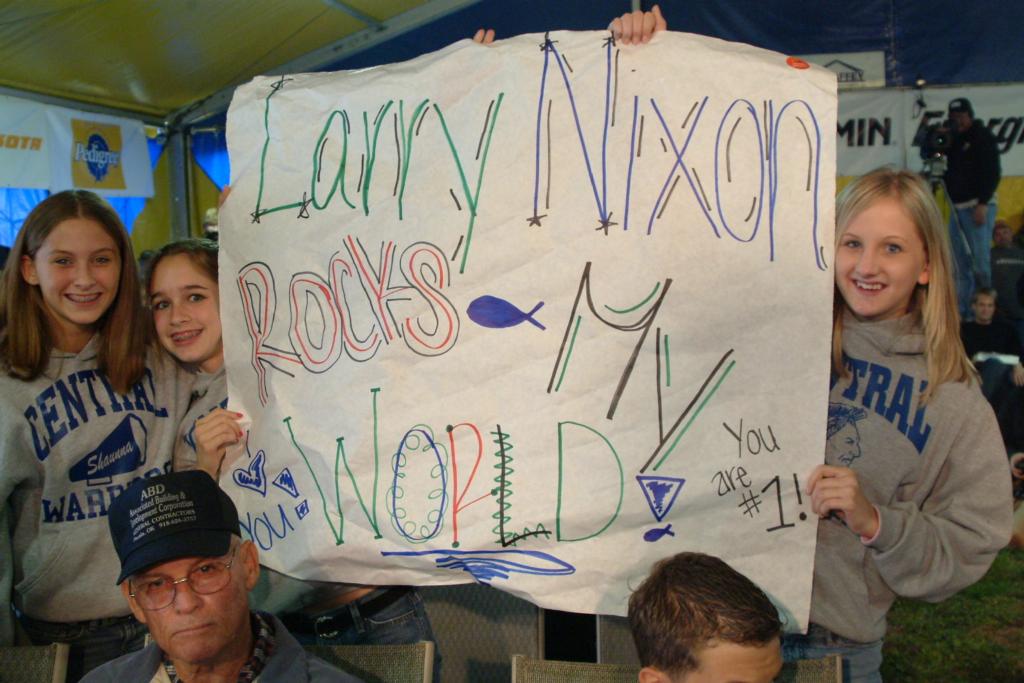 Larry Nixon, teen idol … FLW pros enjoyed a riotous crowd at today’s weigh-in, filled to the brim with middle-school fishing enthusiasts. They screamed for anybody and everybody but reserved most of their mania for Arkansas pro Larry Nixon. When Nixon approached the scales, it got so loud in the weigh-in tent that Nixon and weighmaster Charlie Evans could scarcely be heard. “Larry Nixon, you’re not a teenager, but if you were, there’d be a riot right here,” Evans said. “Yeah, I feel pretty young right now,” quipped Nixon. … The kids were students of Springdale (Ark.) Central Junior High and are members of the nation’s first and largest Hooked on Fishing club.

Tag, you’re it … Presenting sponsor Tyson is making sure that this week’s winner is not the only one with a shot at $200,000. Six Beaver Lake bass were tagged before the tournament, and five of those tagged fish are worth $5,000 apiece to the competitors who catch them. The sixth one, however, is worth a whopping $200,000 – the same amount paid to this week’s winning pro. Arkansas pro Jerry Williams, who caught two fish today for 132nd, joked, “I sat on that red-tag fish all day long.”

Wendlandt’s woes … To the surprise of everyone – not the least of which is himself – Clark Wendlandt is suffering through the worst season of his career. Ranked 131st after three events, it was widely believed that Wendlandt would turn his season around this week on Beaver Lake, where he has enjoyed five top-10 finishes, including two wins. It was not to be. Wendlandt brought in only three bass today that weighed 5 pounds, 13 ounces to put him in 152nd place heading into day two. … “I’m in a little bit of a slump right now, and you know I don’t like it,” Wendlandt said. “I’ll find a way to get out of it.”

Return of the king … Bass-fishing legend Guido Hibdon has not graced the FLW Tour top 10 since 2001, but he strode onstage late in the weigh-in today and took a commanding lead with a five-fish sack of bass that weighed 18 pounds, 4 ounces, more than 3 pounds ahead of second-place pro Jeremiah Kindy. Hibdon’s track record at Beaver Lake is largely unremarkable except for a third-place finish back in 1999. When asked by Charlie Evans if he’d be able to snag them again tomorrow, he offered a simple, “There’s hope.”

Lane returns to earth … After scoring an unprecedented three straight top-10 finishes, rookie Bobby Lane, the current points leader, finished 115th today with five bass weighing 7-7. Barring a complete turnaround, Lane will probably not earn a fourth consecutive top-10 finish. … Luckily for Lane, the pro behind him in the points race didn’t fare well either, with No. 2 pro J.T. Kenney in 110th after day one. No. 3 Matt Herren, however, sits in 37th heading into day two, and No. 5 Brent Chapman is in 10th.

Deja vu … Two of the top 10 pros from the last FLW Tour event on the Ouachita River also finished well today, with Ouachita’s No. 10 pro Jeremiah Kindy sitting in the No. 2 spot and the Ouachita No. 7 pro Darrel Robertson in third place heading into Thursday’s competition. Others, like Jason Kilpatrick, who finished third on the Ouachita, also performed well, with Kilpatrick in the No. 18 spot and Alvin Shaw in 15th. Shaw finished sixth on the Ouachita.

4: Number of times Guido Hibdon has earned a top-10 finish on the FLW Tour.

3-2: Hibdon’s lead over Jeremiah Kindy, in pounds and ounces.

5-13: Weight, in pounds and ounces, of today’s biggest bass, brought in by co-angler Judy Israel of Clewiston, Fla.

5: Number of times Cody Bird has finished in the top 20 on Beaver Lake – in as many tries. He’s currently in fifth place.

“I love Kentucky Lake, but if I ever leave it, this is where I’m coming.” – 2003 Beaver Lake champ and Kentucky Lake native Dan Morehead, who is currently in 51st.

“Honestly, about 50 a day.'” – Co-angler Sondra Rankin, revealing the number of phone calls, e-mails and even proposals she has received since a profile of her aired on “Wal-Mart FLW Outdoors” television, revealing she was single.

“Catch one more than that.” – Pro Dion Hibdon, son of leader Guido Hibdon, explaining to Charlie Evans his plans for success tomorrow. Dion brought in only four bass today.

“I guess they closed their lips or moved.” – No. 192 pro Karen Savik, who strongly believed that she’d catch the big ones this week on Beaver Lake.

“I’m going to have to give them steroids or something.” – Pro Greg Gulledge, who brought in five bass weighing 4 pounds, 15 ounces today.

“Sorry, I’m not Larry Nixon.” – Pro Bernie Schultz, who enjoyed a raucous welcome from the crowd but still did not garner the enthusiasm generated by kid-favorite Nixon.

“Just been playing hooky.” – Lincoln Curtis, young son of pro Bobby Curtis, when asked by Evans what he’d done all day – which obviously did not include going to school.

“I think you’ve tapped into the secret. You’ve got to get fans that are under 16 years old.” – Rick Clunn, second only to Nixon in terms of high-decibel young-fan support.