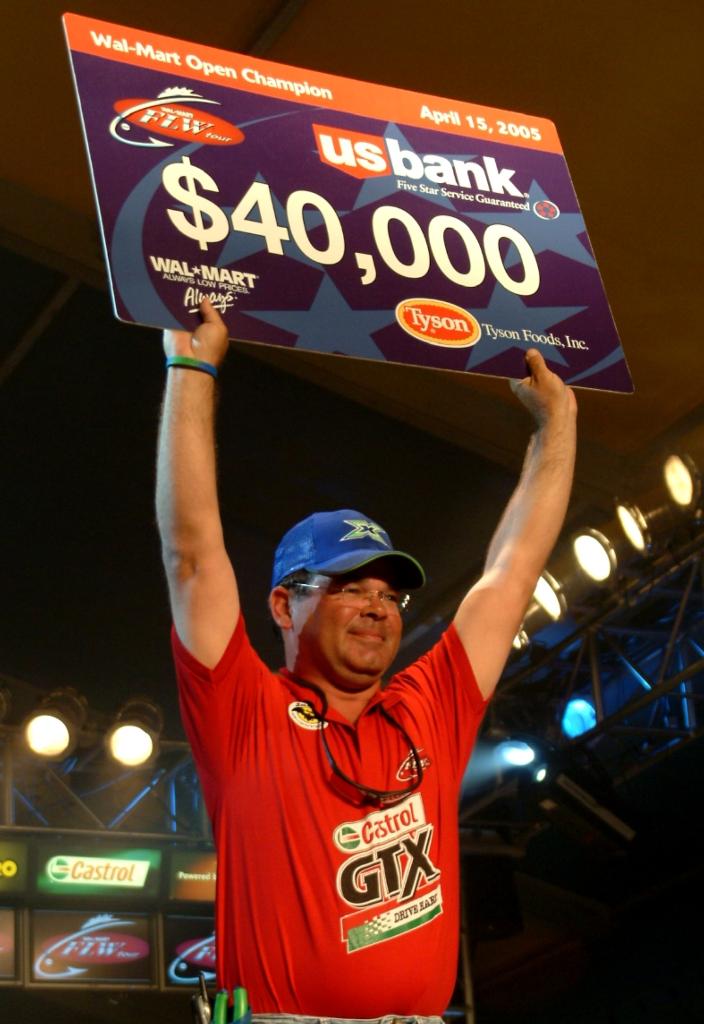 ROGERS, Ark. – Before this week’s event on Beaver Lake, Frank Meyer was having his worst season yet on the FLW Tour. After two straight seasons in which he qualified for the championship, Meyer was ranked 116th after three events and never even caught a fish on the Ouachita River.

That all changed this week, when Meyer scored his first top-10 event of the season – something he had already accomplished three times on the FLW Tour, and, interestingly enough, he had finished in seventh place each time.

Meyer entered the final co-angler day in the No. 4 spot and caught the only limit of the day from the back of the boat, a 6-pound, 12-ounce sack that earned him $40,000 as the Wal-Mart Open co-angler champion.

Several of the co-anglers fished behind sight-fishing pros today, something most co-anglers don’t get too excited about. Meyer’s day-three partner, Jeremiah Kindy, was bank-fishing for spotted bass, a tactic that suited Meyer to a T.

“I was fortunate that my partner wasn’t sight-fishing,” he said. “We went to a couple of places where he had caught spotted bass, which worked in my favor. I like to finesse fish here.”

In three full years of FLW Tour competition, Meyer has learned a little more about Beaver Lake with each visit, and this week he parlayed that knowledge into the most lucrative victory a co-angler can achieve on the FLW Tour.

“This is my fifth trip out here and only my third tournament,” he said. “(Finesse fishing) just seems to work out for the co side of the boat.”

Blosser and pro Robert Karbas Jr. prefished together for a week and a half and figured something out that eventually earned Blosser $20,000.

“We had real bluebird conditions that makes it tough for fishing,” Blosser said. “Basically I just stuck to my game plan of throwing a Spot Remover and a 6-inch FLW finesse worm.”

The key, though, was the Zoom pen he used to add a little chartreuse color to the finesse worm.

“I saw people putting too much on them,” he said of the extra color. “It only needed an eighth of an inch or less.”

Blosser also relied on long casts to catch his fish.

“Long casts seemed to be the deal, because the fish seemed to be a little spooky in the clear water,” he said. “Once you got them, if you gave them slack, they would spit the bait back out. If you didn’t do it just right, you weren’t going to catch them.”

“Today I was fishing with a sight-fisherman, and he was moving down the bank pretty fast, so I’d have to pick out targets,” Blake said. “Every now and then he’d stop on a bed, and I was able to make long casts and drag a Senko across the bottom. I caught two doing that.”

Blake fished with Mark Pack today and finished decidedly better than his pro, as Pack did not weigh in a fish. Blake reported that he too lost a fish today that weighed in the 2 1/2-pound range.

He caught his bass on a watermelon finesse worm and said the key to fishing Beaver Lake this week from the back of the boat was to fish slowly.

“The fish weren’t very active,” he said. “You had to entice them into biting.”

Taking fourth place is Tallahassee, Fla., angler Rob Newell with three bass weighing 3 pounds that earned him $9,000. Newell moonlights as a reporter for FLW Outdoors Magazine and FLWOutdoors.com when he’s not on the water.

Behind him in fifth is Mary Parnell of Casselberry, Fla., who is the third woman to score a top-10 finish on the co-angler side of an FLW Tour event this year. Parnell caught two bass today that weighed 2 pounds, 11 ounces. She earned $8,000.

Rounding out the top 10 co-anglers on Beaver Lake: