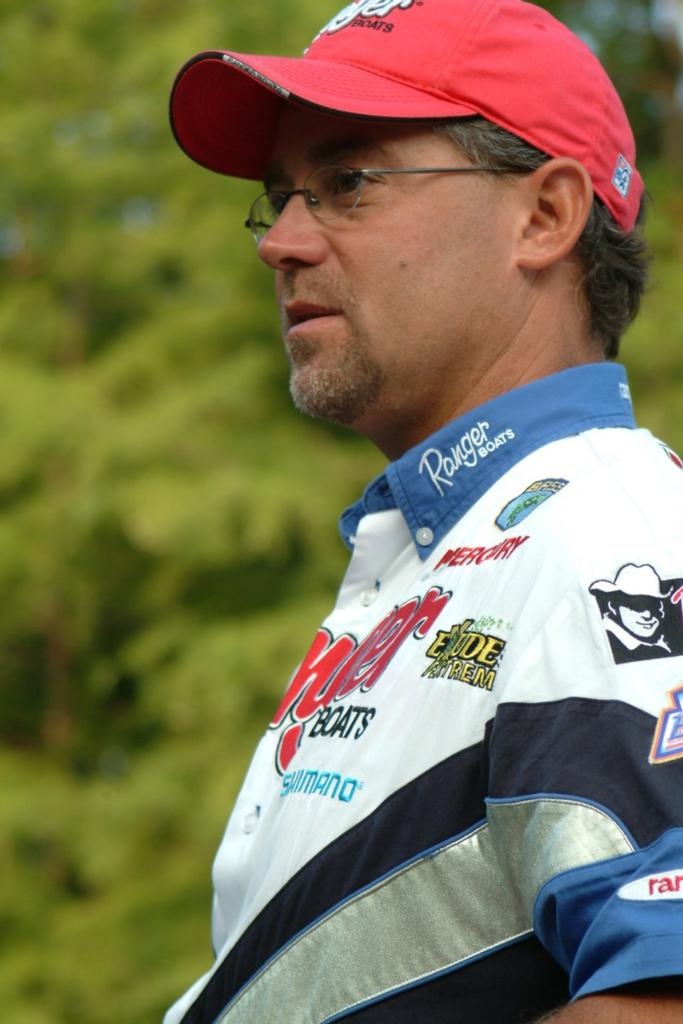 Scott Suggs of Bryant, Ark., is one of the local favorites at the Wal-Mart FLW Tour Championship on Lake Hamilton – a role that brings additional advantage and additional pressure. Photo by Rob Newell. Angler: Scott Suggs.
July 12, 2005 • Rob Newell • Archives

HOT SPRINGS, Ark. – In just a few days, one angler will be awarded $500,000 for winning the Wal-Mart FLW Tour Championship on Lake Hamilton in Hot Springs, Ark.

Scott Suggs of Bryant, Ark., hopes his name will be printed on that check.

If the name Scott Suggs doesn’t have the same familiar ring as other well-known Arkansas-based bass pros, it’s because Suggs has been carrying out his professional bass-fishing ambitions in a calculated, under-the-radar fashion.

Raw fishing talent, however, is hard to hide, and Suggs has produced a few blips on the screen since turning pro last year.

In 2004, Suggs led the Bassmaster Tour Angler of the Year race going into the last event and eventually ended his rookie BASS season in seventh place.

In 2005, the 39-year-old electrical contractor decided to add the FLW Tour to his tournament lineup.

After two dismal 100th-place finishes in Florida, Suggs kicked it into high gear finishing 32nd at the Ouachita River and 24th at Beaver Lake. He posted his first FLW Tour top-10 finish at Wheeler with a sixth-place showing and ended the season with a 16th-place finish at the Potomac.

His rookie-season performance put him in 12th place in the FLW Tour standings. Now Suggs has quietly positioned himself to walk away with professional bass fishing’s richest purse at the Forrest L. Wood Championship, which just happens to be held on the very lake where he cut his bass-fishing teeth 20 years ago.

So much for under the radar; Suggs is now under the microscope.

Suggs may be considered a rookie on the national tours, but in his home state of Arkansas, he is

known as a wily veteran. Since Lake Hamilton falls under his central Arkansas tournament-fishing jurisdiction, he is one of the favorites going into the FLW Tour Championship.

Many pros would agree that local advantage is at a premium in the summer, especially on a lake like Hamilton, where knowing the location of brush piles and unique bottom contours is a huge benefit.

While Suggs does not boast about his local advantage, he doesn’t deny it either.

“In March or April, Hamilton would be a much more level playing field,” he noted. “But if there is a peak time for local advantage on this lake, it would have to be now. Guys like George Cochran, Rob Kilby and Jeremiah Kindy know where the productive water is, and they won’t be making many wasted casts during the tournament.”

Suggs knows the location of dozens of deep-water brush piles, but perhaps his greatest ally is his conviction that Hamilton contains plenty of bass. Indeed, confidence is in his corner.

“This lake is full of fish,” he said. “It may not look like it this week, but they’re here. If these guys really knew what kind of fish live here, I think it would change their perspective on things. In the winter, this is one of the best lakes in the state. You can go down any bank with a shallow-running crankbait and catch all the bass you want. It usually takes 18 pounds to win winter tournaments here.”

So if Hamilton is so good in the winter, what’s the problem in the summer when 10 to 11 pounds is considered a good catch?

“The summertime boat traffic on this lake is unimaginable,” he said. “On the weekends you can literally walk across the boats out here. Every good shallow point, hump and bar has a dozen boats pulled up to it with folks swimming and water skiing – you just can’t get away from it.”

Simple mathematics bolsters Suggs’ theory. Hot Springs has a population of nearly 40,000 people, and Hamilton only has 7,000 surface acres, making it a very popular watering hole.

“I think a majority of the bass suspend with the stripers out in 20 feet of water,” he offered. “The shallow fish have become conditioned to feed at night. But they don’t get much of a break there either, because there are at least three night tournaments a week here, and they keep the fish educated.”

Suggs points out that as the boat traffic increases, the catch rates decrease.

“Fourth of July weekend put a hurting on this place,” he said. “After the holiday weekend, the water color changed from all the boat wakes. The Thursday night tournament after the Fourth posted the lowest winning weight in 13 weeks.”

The complexity of fishing Hamilton in the summer is compounded by the number of fishing options facing anglers.

“Right now there are many ways to catch fish – off docks, shallow grass, ledges, brush, drops and humps. You can fish drop-shots, shaky heads, Carolina rigs, crankbaits, Texas rigs and topwaters. And I suspect that several of these patterns will carry anglers into the top 12.”

So does Suggs feel particularly lucky that a $500,000 payday tournament is being held in his backyard at a time when he can harness a local edge?

“I have to view this as just another tournament,” Suggs said. “If I start thinking about the possibility of winning a half a million dollars, my brain will just overload. I have to focus on one fish at a time, one bracket at a time and one day at a time.”

“Some might see this as a once-in-a-lifetime opportunity,” he continued. “But for me, every pro tournament I fish is the opportunity of a lifetime. I’m very fortunate just to be in this position.”

Even with a local advantage, Suggs harbors no delusions of grandeur about winning the event.

“In order to win, everything has to go exactly right.” he stated. “For instance, look at Greg Hackney. He is absolutely awesome. For the last several years he has been the hottest angler in the world. Yet, how many national events has he won? One. That’s not to take anything from Greg, but rather to point out that special things have to happen in order to win one of these things. Even the best pros in the world don’t win tournaments at will.

“With fishing, there are just too many things out of an angler’s control,” he continued. “That hurricane (Dennis) could easily march up here, drop 10 inches of rain on us and all my advantage suddenly goes out the window. This is not golf or bowling, where the environment is held to a constant to a much larger degree. The only constant we can count on is the unexpected.”

Suggs has approached his professional bass-fishing career with the same level of caution and wisdom. He has passed on the opportunity to jump out on the professional tours time and time again to make sure his family and financial priorities are in order before starting a full-time fishing career.

“There are some guys making an awesome living at this sport, but I’ve seen it ruin people, too,” Suggs pointed out. “When you depend on the sport you love to pay the bills, it can quickly turn it into the sport you hate, and I never want that to happen to me.

“I want to be comfortable, competitive and have fun. Thanks to FLW and the phenomenal growth of professional fishing, I’ve been able to do that. I’ve made over $50,000 in winnings on the FLW Tour this year – and that doesn’t include what I’ll make at the championship.”

Though Suggs has experienced fishing success in his first two years, he is adamant about not allowing tournament fishing to threaten his family’s financial stability.

“I own an electrical business, but the fact is, my tournament fishing success can be attributed to my wife, Kim.” Suggs said. “She is a CPA and has a very good job. Her support of my fishing career has been first class.

“I promised her that our family’s future comes first and my fishing comes second. The minute I feel that my fishing is taking away from the family, I’ll put my rods down and go back to tugging wire. I’m simply not going to make my family suffer for my dreams – they have dreams too.”

Being away from his wife and two children is the part of professional fishing that Suggs finds the most difficult. In January, he left home for a six-week tournament stint, and being away from the home front wore him down quickly.

“After week four, I couldn’t take it anymore,” he revealed. “I finally called Kim and asked her to bring the kids to Florida. The family flew down, and we all went to Disney for a few days. Just seeing them made me feel like myself again, and it turned on a switch inside me. From that point on, I turned my season around. As the tours moved closer to home, I was able to see my family more often, and it made a

Over the next few days, Scott Suggs will be in his element. He will be close to home, close to family and friends, and close to the very fish that taught him a lot of what he knows about catching them.