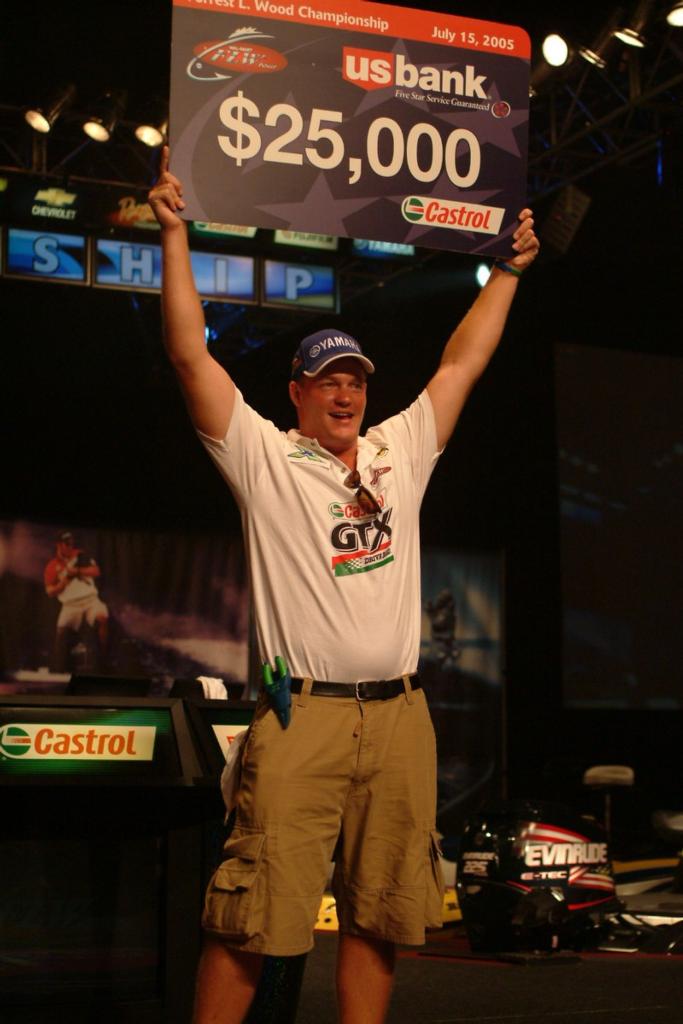 HOT SPRINGS, Ark. – Trevor Jancasz is from White Pigeon, Mich., but he will always remember Arkansas’ Lake Hamilton as the place where he won his first FLW Tour Championship title as a co-angler.

plus bass from his weigh-in bag and walked it to the front of the stage for the crowd to see. The bass anchored a three-fish string weighing 6 pounds, 10 ounces, which gave him the victory.

“I feel tingly,” an overwhelmed Jancasz told Charlie Evans as he accepted his $25,000 first-place check. “No really, I’m tingling all over – this feels weird.”

Jancasz squeaked into the top-24 cut yesterday in 22nd place. But with weights zeroed out this morning, it was game on.

The big bass bit at about 10 a.m. after his pro, Andy Morgan, made a long run up the river.

“Andy pulled into this little narrow pocket and started fishing down the left hand side,” Jancasz recounted. “I threw my cut-tail worm out the other side of the boat into the middle of the channel. My rod loaded up, I set the hook, and I screamed for the net. After catching pipsqueaks all week, I knew it was a good one.”

For the record, Jancasz caught all of his winning fish on an 1/8-ounce Bite-Me jighead with a 5-inchYamamoto Cut-tail worm in green pumpkin and watermelon.

“That’s pretty much what I used all week,” he said. “The only difference today was that I went to 6-pound-test Bass Pro Shops fluorocarbon instead of 8-pound-test. I figured it would help me get a few more bites – and it did.”

Bill Gift of Alix, Ark., also just squeaked into the top-24 cut and made a run at the title, but finished second with five bass weighing 5 pounds, 7 ounces, which earned him $15,000

Gift qualified in 21st place after fishing with Jeremiah Kindy and Tracy Adams.

Today he fished with Mickey Bruce and used a topwater stickbait to catch schoolers.

“This tournament was all about perseverance for me,” Gift said. “It felt like an endurance contest.”

ounces, which earned him $10,000. Knapp fished with Greg Hackney on day one, Koby Kreiger on day two and Danny Correia today.

He qualified in 19th place over the first two days using an 1/8-ounce Shaky Head worm and a topwater.

Today he relied totally on the topwater.

“When the fish would come up schooling, I’d throw a white Super Spook Jr. over them,” he said. “That’s how I caught every one of them today.”

Todd Lee of Jasper, Ala., finished fourth with three bass weighing 2 pounds, 15 ounces, which earned him $9,000.

“Alton was fishing real specific brush piles in deep water,” Lee said. “I kept my eye out for schoolers, and whenever they would come up, I’d get after them with a popper. I had five fish blow up on it, but only caught three.

“This is absolutely the hardest tournament I’ve ever fished,” said Lee, who has been fishing as a co-angler since the FLW Tour started in 1996. “These are some of the smartest fish I’ve ever seen.”

The FLW Tour’s 2005 Co-angler of the Year, Tee Watkins of East Point, Ky., kept his hot

“I fished a variety of worms to make the cut,” Watkins said. “I was using a finesse worm, a wacky worm and a big Zoom Ol’ Monster, all in plum apple color.”

“I used a Lucky Craft jerkbait for most of the day,” said Watkins, who earned $8,000 for his finish.