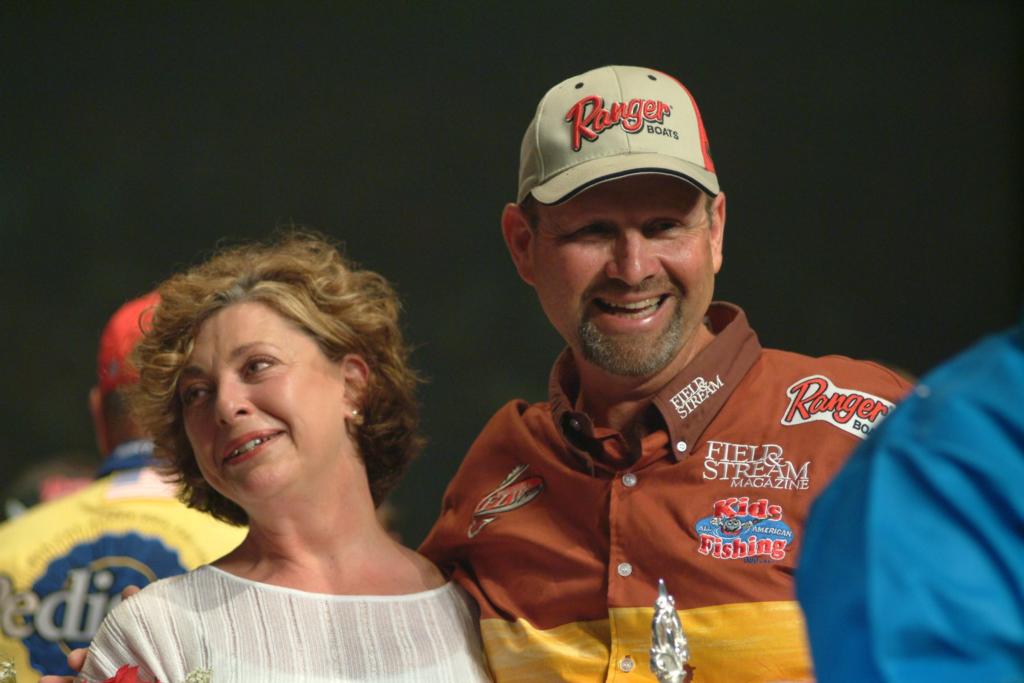 Trophy wife … So what’s it like to be the woman behind the man who took home half a million dollars cash and the Forrest L. Wood Championship trophy? According to Debi Cochran, it’s exhausting. “I’m exhausted, he’s exhausted,” she said. “It’s exciting but somewhat like a roller-coaster ride.” As George Cochran’s wife, Debi has stood by him through two Bassmaster Classic wins and was there today when he won the Forrest L. Wood Championship. To be $500,000 richer in an instant is obviously overwhelming. “I can’t even think right now, I’m so nervous,” Debi said. “What I think about mostly is what it means to him and how deserving of this he is, though every wife and family wants their guy to be the champion.” … It’s been nine years since George took home his second Classic title, and at that time, Debi never dreamed there would come a day when he could walk away a winner with half a million in his pocket. “I never really thought this sport would become as big as it did,” she said. “At my husband’s first Classic, the last man got $600. It didn’t even pay for expenses to practice. Those guys fished it when the purse wasn’t so big – they fished it because they loved it.” … Debi admits that George’s long days away from home add up, especially for a veteran such as her husband. “There are a lot more tournaments than there used to be, and he leaves home in January and comes home in June,” she said. “Last week, he read Father’s Day cards from the kids – in July!” Nevertheless, it’s time-tested anglers like George who have given the younger generation a model to follow on how to balance work and family and build a career that lasts. “The first thing I think about is how long he’s been fishing and his age, and that he has this gift that he has really used to his best,” she said. “The ones that persevere during the tough times are the ones that last.”

Action distraction … The water surrounding the launch ramp was full of spectator boats this morning, and though the support was no doubt appreciated, the resulting wake disrupted at least one angler’s pattern. Dean Rojas was on a hot shallow-water bite this week and claimed yesterday the spot he was fishing had the bass in it to win the championship. But it was not to be, and that was due in part to the heavy boat traffic on Lake Hamilton, a definite recreational destination. “During the practice period (last weekend), I saw boat traffic, but that stuff gets lighter and lighter (during the week), and you kind of get spoiled,” Rojas said. “And then today, here they are. It’s hard to do with 2-foot waves crashing against your boat. It killed the bite.” … That said, Rojas – who earned $35,000 as the fourth-place pro – said he leaves the tournament with no regrets. “I had my fish early,” he said. “I wanted that big bite.” 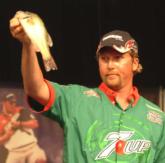 Spooked no more … In 2004, J.T. Kenney suffered through his worst year as an FLW Tour pro. Mired at the bottom of the points standings, things weren’t looking good, but luckily for Kenney, Okeechobee was first on the schedule again in 2005. As his record shows, the Maryland resident is a knockout on the Florida lake, and Kenney finished 14th there to get the momentum rolling in 2005. It never slowed down, and at the last tournament of the season, Kenney was the No. 1-ranked angler on the FLW Tour. That title ended up belonging to Greg Hackney, but nonetheless, it was a banner year for Kenney for sure. He rode the wave of success in ’05 all the way to the championship, where he put himself in position to claim the $500,000 win. He ended the tournament seventh, but the last men on stage with fish to weigh in were Kenney and eventual winner George Cochran. Why the turnaround? “I think I was fishing too many tournaments last year,” Kenney said. “This year I concentrated on FLW, and it freed me up a little.” Kenney’s success in FLW events this season – he ranked No. 2 in EverStart Southeast points – can be attributed to a 180-degree change in attitude. “I got spooked last year,” Kenney said. “I’d be worried if I didn’t have a fish with three hours to go. I’m looking at it completely different this year. I think I kind of found my groove, and it seems to be working.” Kenney believes the change in his mental game will bode well for future seasons. “There’s more to come,” he said.

Karbas’ karma … Yesterday, it seemed as if Lady Luck had a crush on Robert Karbas Jr., as the North Carolina pro managed to get into today’s final round despite catching zero fish yesterday – in bracket competition, no less. Today, she seemed to cast her fateful eye on someone else, as Karbas lost three fish that would have likely handed him the tournament crown. But the loss was no match for Karbas’ enthusiasm, as the North Carolina pro maintained a positive attitude and still brought in 4 pounds, 3 ounces to earn his first FLW Tour top-10 as the ninth-place pro. “Yesterday I felt like I had been snake-bit,” Karbas said of his tough day on the water. “Today I enjoyed the day, and just to know I had it in my grasp is rewarding to me personally.” … Karbas said he was unsure of the weight of one of his lost fish, but the others he estimates to weigh 3 1/2 and 2 1/2 pounds. All were lost within sight of the boat ramp with about 15 minutes left in the day.

Arkansas honors Wood … Earlier today, Ranger Boats founder Forrest L. Wood and his wife, Nina, were honored by the state of Arkansas with an induction into the Arkansas Walk of Fame. The fabled sidewalk is located in downtown Hot Springs – site of this week’s tournament – and the Woods’ induction came as a welcome surprise. “I didn’t know anything about it until today,” Forrest Wood said. “They have a sidewalk downtown, and actually somebody with FLW Outdoors put it all together. They’ve got a nice plaque embedded in the sidewalk with mine and Nina’s name on it. It’s a great honor and a great thrill.” … The Woods join some elite company on the sidewalk, with numerous luminaries and dignitaries such as Maya Angelou, Johnny Cash and former President Bill Clinton among the inductees. “You had to be born in Arkansas and have done something in Arkansas,” Wood said of the induction requirements. “I was afraid you’d have to be buried in Arkansas.” Luckily for Forrest and Nina, who are alive and kicking and doing quite well, that was not a prerequisite.

16,000: Estimated number of people packed into Summit Arena to watch the final weigh-in.

3-12: Weight, in pounds and ounces, of Cochran’s margin of victory over Chad Grigsby.

450,000: Dollar difference between the first- and second-place payout.

3: Number of championship victories Cochran has on the two major bass-fishing tours.

25,000: Dollars donated to the Children’s Miracle Network by Energizer as a tribute to the Wal-Mart FLW Tour anglers who collectively maintained a 98-percent live-release rate throughout the tournament season.

“They never schooled all day. They must know it’s a Saturday.” – No. 12 pro Chip Harrison, whose schooling pattern took a weekend break on day four.

“They all fish; they know how tough they are sometimes.” – Arkansas native Larry Nixon, responding to a comment about disappointed Arkansas fishing fans after Nixon weighed in just three bass.

“I came from Japan to do this. I really enjoy it, and I have a great time.” – No. 10 pro Takahiro Omori, a resident of Emory, Texas, by way of Japan.

“Darn.” – George Cochran, in response to an 8-ounce penalty for a dead fish. It obviously didn’t hurt him.

“I let half a million dollars slip through my hands.” – Robert Karbas Jr. on his three lost fish with minutes left to go.

“Do your best, sport.” – J.T. Kenney’s father’s words of advice as the young angler went to weigh in his final fish with only one competitor remaining.

“I feel like Forrest Gump. I don’t have to worry about money for a while.” – Winner George Cochran.