Tour preview: Look for the hook at Big O 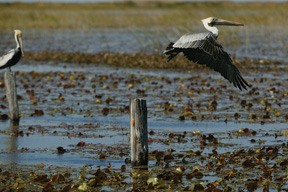 In a song, a hook is a catchy musical phrase that elevates the tune from mediocre to memorable. At Florida’s Lake Okeechobee this week, Wal-Mart FLW Tour anglers preparing for the customary season opener are looking for a hook of their own, seeking that one key ingredient this year that will elevate their performances on a very familiar waterway from just average to above the fray.

One hook could be if an angler figures out a strong spawning pattern. With warm weather and a favorable moon phase, conditions have recently been encouraging for bass spawning in Okeechobee. Indeed, a number of anglers competing in the Stren Series Southeast Division opener at Okeechobee

two weeks ago reported catching handfuls of spawners. That trend will only continue as the month wears on.

“There’s always some spawning going on down there,” said Mineola, Texas, pro Kelly Jordon, last year’s FLW Lake Okeechobee champion. “So, sure, there will be some spawning, but I don’t know if there will be very much sight-fishing. When you’re pitching holes in the grass or holes in the mats, that’s probably a bed you’re catching them on anyway, even if you can’t see it.”

The spawn, of course, depends on the weather – temperate weather, to be exact. Last year, cold and blustery conditions dampened enthusiasm for many anglers hoping for a warm South Florida tournament. This year, however, the anglers have so far been encouraged by sunny skies and temperatures in the 70s and 80s as the tournament approaches.

“Leading up to it – as long as there are no fronts – it looks like people will probably be catching them,” Leander, Texas, pro Clark Wendlandt said.

If pros don’t find their hook by mastering the weather, there is always the potential for another, more literal kind of hook: a magic bait. Every year, it seems, some new bait takes the tour by storm by winning a notable tournament here and there. The basic idea: If it’s new and it’s working, everybody wants to use it. Besides the usual Okeechobee flipping technique, there is a lot of talk about action baits like spinnerbaits, Rat-L-Traps and even swimbaits playing key roles at the FLW opener because a lot of the water has been mucked up by recent hurricanes. To that end, more than a few pros kept a keen eye on the Stren Series tournament two weeks ago where pro Bryan Thrift won using a Chatterbait, a custom swimming jig made out of South Carolina.

“I’ve been using that bait for a couple of years,” said Russellville, Ark., pro Ray Scheide, the 2004 FLW Okeechobee champion. “I’m sure it’s going to catch a lot of fish, and it could play a key role all year. It’s a magical bait.”

But baits aside, the biggest key will of course be the ability to find the bass. Last year at Okeechobee, that was easy, at least in theory. All you had to do was follow the crowd to an area called the Monkey Box. Hurricanes the summer before had left little clear water on Okeechobee, forcing anglers to fish bumper-to-bumper in the relatively clean Monkey Box area.

Hurricanes again raked South Florida last summer, so Okeechobee is still a muddy mess, albeit a completely different-looking muddy mess. Familiar fishing areas have been altered dramatically; Monkey Box is gone as a clear-water bass haven, but a new area, Moonshine Bay, has stepped up to fill the role.

“Moonshine Bay is going to be your new Monkey Box,” Scheide said. “But guys are going to be able to spread out a little more. It’s not going to be as ridiculous as it was last year. Okeechobee’s so big, there’s always going to be some clear water somewhere.”

In addition to Moonshine Bay, anglers are talking about the return of productive fishing in the South Bay area. Last year, South Bay, which is located conveniently close to the tourney’s host city of Clewiston, was mostly out of play. But this year, South Bay and a stretch of water called the Cornfields could play significant roles.

“Historically, South Bay has some of the largest fish in the lake if you can figure out how to catch them.” Jordon said. “It’s definitely a sleeper area this time. The hurricane tore a lot of stuff out of there, which could open up some more visible water that’s been unfishable for years.”

South Bay provided the fish that pushed Scheide to a 13-pound victory in the finals of his first FLW Tour campaign at Okeechobee, in 2004. He’s looking forward to the possibility of returning to the same

area this week, even if it looks a little different than it has in the past.

Wherever they find them – and someone will find them – the Big O is positioned to cough up some serious bass for the FLW opener. Jordon said that as long as an angler stays focused and keeps the crowds out of mind, he or she could have a very productive week.

“In Florida, if you’re running away from the crowd, you’re running away from the fish,” he said, adding that it will likely take more than 30 pounds over two days to make the cut and contend for the title. “We’ve heard for years how Okeechobee was coming back, and I think we’ve reached that point. There’s a possibility that this could be a breakout year for Okeechobee. We could see a bunch of monster fish. At least, that’s what I hope will happen. This is just one of my favorite lakes for bass.”

Located just south of the city of Okeechobee and just north of Clewiston, Fla., Lake Okeechobee literally translates as “big water” in the native Seminole language. Covering more than 467,000 acres (or more than 750 square miles), the lake spans approximately 40 miles from north to south and about 30 miles from east to west.

However, while Lake Okeechobee is the second-largest freshwater lake in the lower 48 states (Lake Michigan is the largest), the lake is relatively shallow with an average depth of 15 feet. Despite its shallow waters, however, the Big O is home to myriad wildlife including alligators, osprey, pelicans, eagles, crappie, bream and, of course, bass.