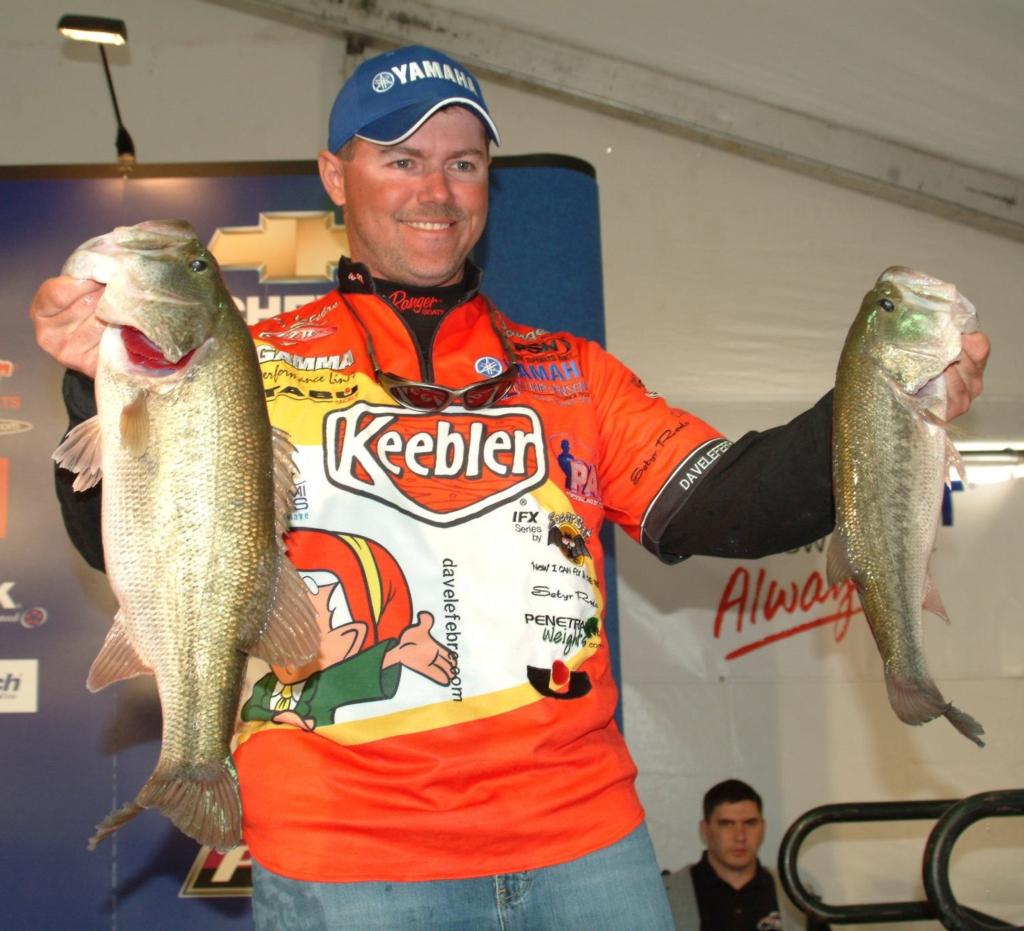 AUSTIN, Texas – Just as pretournament favorite Clark Wendlandt relinquished his lead at the season-opening Wal-Mart FLW Tour event on Lake Travis, another Kellogg’s pro vaulted to the top of the leaderboard. Pro Dave Lefebre, who started the day in fifth place, caught the heaviest limit Friday and finished the opening round with a two-day total of 26 pounds, 10 ounces.

It appears someone has at least challenged Wendlandt’s supremacy in his backyard.

While Lefebre has every reason to be proud, one gets the feeling that Wendlandt caught only what he needed and decided to save his best water for the final round. After all, weights were cleared after Friday’s weigh-in, and everyone that qualified for the final round starts on equal footing tomorrow.

Even so, Lefebre has demonstrated that he is a threat to Wendlandt, consistently catching sizeable 3- and 4-pound fish on a lake chock-full with 13-inchers. Much like Wendlandt, Lefebre is catching his best fish first thing in the morning and then leaving the area entirely. 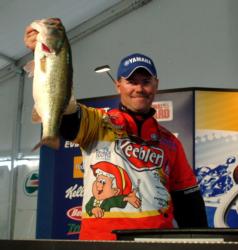 He claims his baits are all jigs, anywhere from an 1/8 ounce all the way up to the 1-ounce variety. He starts each day with five rods on his deck – all tied with jigs – and works his way from shallow all the way down to 40 feet deep. The Union City, Pa., native is tipping his jigs with 4- and 5-inch twin-tail Yamamoto grubs.

He says his pattern is a typical prespawn deal, yet strangely he’s had his entire area completely to himself. That same area was blanketed with as many as 10 boats at a time during practice, but oddly enough, they cleared out once the tournament commenced.

While Lefebre is catching like crazy, he claims he’s still missing a lot of fish too.

“Tomorrow I’m trying an even smaller hook. I’m not even close to burning out my fish. The goal tomorrow is 14 pounds. I think 14 pounds a day is good enough to win it.” 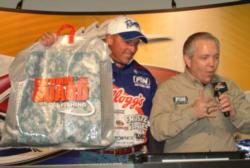 Day-one pro leader Clark Wendlandt landed another solid limit Thursday – 8 pounds, 6 ounces – and qualified for the finals in second place with a two-day total of 25-9.

“I didn’t fish anywhere today that I fished yesterday,” said Wendlandt, who threw mostly crankbaits on day two. “I got a limit fairly early and then spent basically the whole day practicing. I didn’t really find anything new. I went to some places that I haven’t fished in five years.”

Wendlandt was agitated with Lefebre, not because of anything fishing-related, but because Lefebre had publicly questioned Wendlandt’s pingpong game.

“Let me tell you something. We played 15 games the other night and I won 14. I thrashed him. He has no chance tonight.”

Wendlandt says he has no problem talking smack about pingpong, but when it comes to fishing, he plans to just worry about himself.

“I’m just going to go out and catch fish.”

Green moves up to third 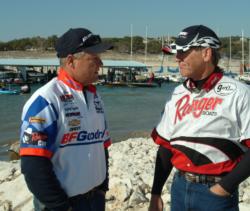 Jerry Green of Del Rio, Texas, qualified in third place for the pros with an opening-round weight of 24 pounds, 3 ounces. Although he spent more time in his primary area than he wanted to, he caught a nice limit weighing 11-1.

“I hit it one time for about an hour,” said the BFGoodrich Tires pro, referring to his best spot. “I think I caught three fish in there. The fish were a little more finicky today.”

To trick those finicky Lake Travis bass, Green used a combination of jigs and drop-shots. He was done for the day at 11 a.m.

“I figured it would take about 22 pounds to make the cut. I just didn’t want to beat those fish up anymore.” 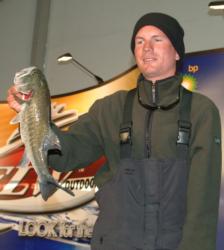 Craig Dowling of Madison, Ala., kept his recent momentum rolling with a fourth-place qualifying weight of 22 pounds, 12 ounces. He caught a limit weighing 10-1 Friday, saying he threw a shaky head with a small watermelon Yamamoto worm. In addition to his early success on the FLW Tour, Dowling is leading the points race in the Stren Series Southeast Division after two events.

“This is pretty exciting,” said Dowling, a 2005 LSU graduate. “I’ve never won a tournament at any level. I’d love to win it.”

Arkansan Ron Shuffield, who hails from Bismarck, grabbed the fifth pro qualifying spot with a two-day weight of 22 pounds, 6 ounces. He caught 10 bass during the opening round, but none were more important than his 7-pound, 2-ounce kicker. That fish anchored his five-bass limit Friday weighing 13-2. 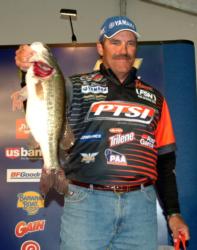 “I caught my fish on a 3/4-ounce football-head jig,” said the veteran Shuffield. “I used both a Yamamoto and a Zoom twin-tail trailer.”

Shuffield fished his jig in anywhere from 12 to 35 feet of water. On day one, nearly all of his fish came from 30 feet or deeper. On day two, he had to adjust as his fish repositioned shallower.

With several tour-level victories to his name, Shuffield will be one to watch as the final round unfolds.

Rounding out the top 10 pros to make the cut at Lake Travis:

All of the top 10 pros caught limits both days of the opening round. 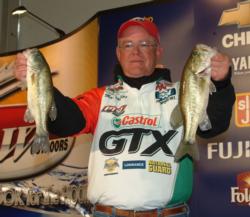 Mark Phillips of Fayetteville, Ark., caught four bass Friday that weighed 6 pounds, 2 ounces and finished with 15-10 to lead the Co-angler Division at the conclusion of the opening round on Lake Travis.

Phillips, a Castrol-sponsored co-angler, is also a vice president with PTSI, the official transportation sponsor of FLW Outdoors. But Phillips does more than lend sponsor support to the world’s premier tournament-fishing organization – he catches big fish, and lots of them. 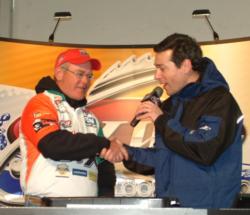 “Today was totally different than yesterday,” he said. “Everything was shallow.”

Fishing with pro Bryan Thrift, Phillips struggled until he switched to a lighter jig. He also swam his bait more as opposed to letting it fall.

“It will be real exciting tomorrow.”

Shawn Stewart of Pflugerville, Texas, placed second with a two-day weight of 14 pounds, 5 ounces. Stewart said he caught his fish in 30 to 40 feet of water with a drop-shot. 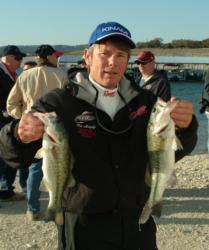 Co-angler Ken Murphy of Meridian, Miss., grabbed the third position with an opening-round weight of 14 pounds, 3 ounces. Murphy caught his bass with a 1/4-ounce Reactions Innovations Screwed Up jighead in 55 feet of water.

Jess Caraballo of Danbury, Conn., nabbed fourth for the co-anglers with a weight of 13 pounds, 15 ounces.

Day-one leader Clint Bridges of Round Rock, Texas, completed the top five co-anglers with a weight of 13 pounds, 11 ounces. Bridges easily qualified for the final round despite not catching a single fish Friday.

Rounding out the top 10 co-anglers to make the cut at Lake Travis:

Day three of competition at Lake Travis begins as the 10 pros and 10 co-anglers take off from Travis County Mansfield Dam Park located at 14370 Mansfield Dam Road in Austin at 7 a.m. Central time Saturday. The co-anglers will wrap up competition Saturday while the pros are fishing the first half of a two-day final round. Saturday and Sunday’s weigh-ins will be held at the Austin Convention Center located at 500 E. Cesar Chavez St. in Austin beginning at 4 p.m.