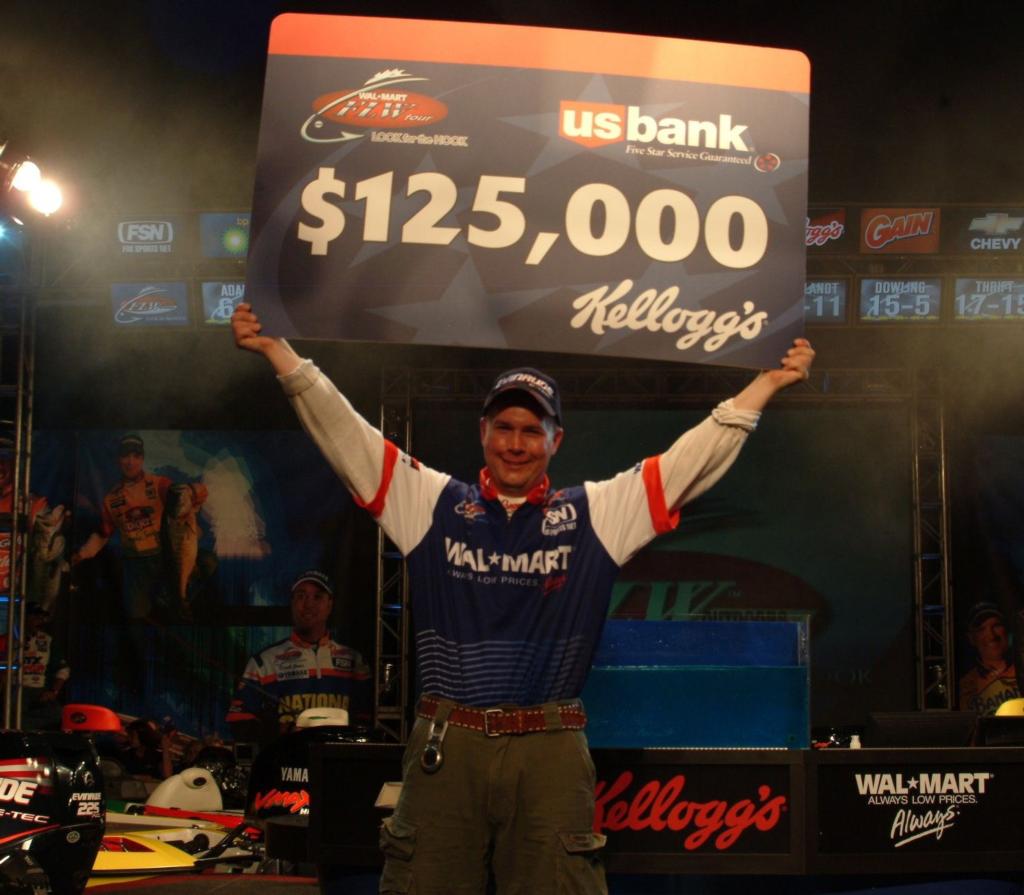 AUSTIN, Texas – Faced with the pressure of fishing against pretournament favorite and hometown hero Clark Wendlandt, young gun Aaron Hastings never blinked. With $125,000 on the line at the season-opening Wal-Mart FLW Tour event on Lake Travis, Hastings fished as though Travis was his home lake, catching 10 bass during the final round that weighed 19 pounds, 9 ounces.

Despite heading into Sunday’s competition with a 2-pound lead, Hastings was still the heavy underdog. He had fished one area for the entire tournament while Wendlandt seemingly had numerous options. Furthermore, fellow young guns Bryan Thrift and Craig Dowling were breathing down his neck. 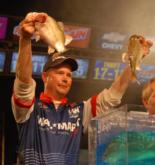 But none of that mattered. What mattered was putting fish in the boat, and Hastings did just that, catching roughly 15 keepers on the final day. His best five weighed 9 pounds, 10 ounces, which secured his first FLW Tour title and 125 large.

“I’m amped,” he said. “The money is great, but to me it’s all about the competition and catching fish. It really doesn’t get any better than this.”

The Middletown, Md., pro never altered his pattern – contour breaks under floating docks located in the back of Cypress Creek Marina. The lack of wind Sunday helped him pinpoint his casts. Hastings primarily threw a drop-shot with a 4-inch Aaron’s Magic Roboworm on 6-pound Berkley Vanish. Then he threw it again, and again. He knew tournament-winning fish were in the area, it was just a matter of finding where they repositioned. On day four, they were located in 18 to 24 feet of water.

“I fish the same way every day,” added Hastings. “I don’t feel pressure anymore. I know my ability. I know what’s inside of me. I definitely have the nerves for this.” 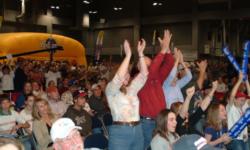 For more proof, Hastings didn’t have a single keeper in the boat at 11 a.m. yesterday, but instead of panicking and running to a new spot, he adjusted. He said that was the biggest mental decision of the entire tournament.

“You just have to have faith in your abilities. I never missed a bite all week. You should have seen the look on my cameraman’s face when I was lifting fish in the boat with 6-pound line. When I flipped that last fish over the catwalk, I stood up and said, `This is over.'”

The 2007 season is only Hastings’ second year on the FLW Tour. Last year was extremely difficult, but he is no stranger to success, as he was the 2005 Stren Series Northeast Division points champion. Interestingly enough, Hastings beat out none other than Wendlandt to claim the points title. In fact, after capturing the points title, Hastings was featured as one of the young pros to watch in a 2006 preview story by FLWOutdoors.com writer Rob Newell. It appears Newell’s story was written just a season too early. 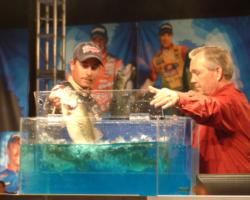 At takeoff Sunday morning, Thrift didn’t exactly exude confidence. He was catching fish, but each and every day he was getting fewer and fewer bites. On day four, he caught a dozen keepers, weighing five for 10 pounds, 9 ounces. Thrift’s limit, caught with a 1/2-ounce Shooter Lures jig tipped with a small Zoom salty chunk, was the heaviest of the final round.

“I just haven’t been around big fish,” said Thrift, who was fishing floating boat docks and pontoon boats. “In my six days of practice, my biggest fish was about 2 1/2 pounds. But this is awesome. I’ll take $50,000. I’m not greedy.

“I am getting married July 21, so this money will definitely not go to waste; it will probably go toward the wedding and a house.”

Thrift has already notched 10 top-10 finishes and three victories out of only 28 FLW Outdoors events. This, however, was his first top-10 on the FLW Tour. Expect more to come as the Tour visits Lake Norman in April, located only 45 minutes from his home. 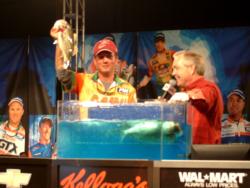 Much like Hastings, Dowling was fishing a marina located in the back of a creek. Dowling caught his fish with a homemade 1/16-ounce finesse jig tipped with a Yamamoto shad-shaped worm. During the opening round, he used a green-pumpkin worm, but he switched to the smoke variety today. He rigged his tiny jig with 15-pound Power Pro braided line and used an 8-pound Sugoi’s leader.

The result was a five-bass limit weighing 9 pounds, 13 ounces and final-round total of 15 pounds, 5 ounces. He finished the week in third place and earned $40,000.

“I give a lot of credit to the worm I was using,” said the Madison, Ala., pro. “I think the fish saw a lot of finesse worms during the week.” 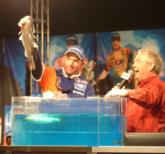 Wendlandt, a Leander, Texas, pro, gave the raucous Austin-area crowd what they wanted Sunday afternoon. When he reached into his bag for fish No. 2, out came a 4-pound kicker. Most in attendance thought that was just the start of good things to come. Unfortunately, that was Wendlandt’s last fish.

The Kellogg’s pro’s key baits this week were a Storm Wiggle Wart crankbait and a homemade 9/16-ounce jig tipped with a green-pumpkin Gambler cricket, fished around docks.

While he felt the added pressure, Wendlandt certainly wasn’t a victim to the home-lake jinx.

“I probably had enough fish on to win the tournament,” said the two-time Land O’Lakes Angler of the Year, who broke off two fish Saturday and two fish Sunday. “I’ve never seen them bite a jig that good on Travis before.” 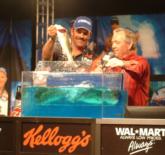 Shuffield caught his fish this week with a 3/4-ounce football-head jig, tipped with either a Yamamoto or a Zoom twin-tail trailer.

“Once you get to the final round, there’s only one place that matters, and that’s first place,” said the seven-time BASS winner.

Rounding out the top 10 pro finishers in FLW Tour competition at Lake Travis:

The next FLW Tour event, the second of the season, is scheduled for the Fort Loudoun-Tellico Lakes near Knoxville, Tenn., March 29-April 1.