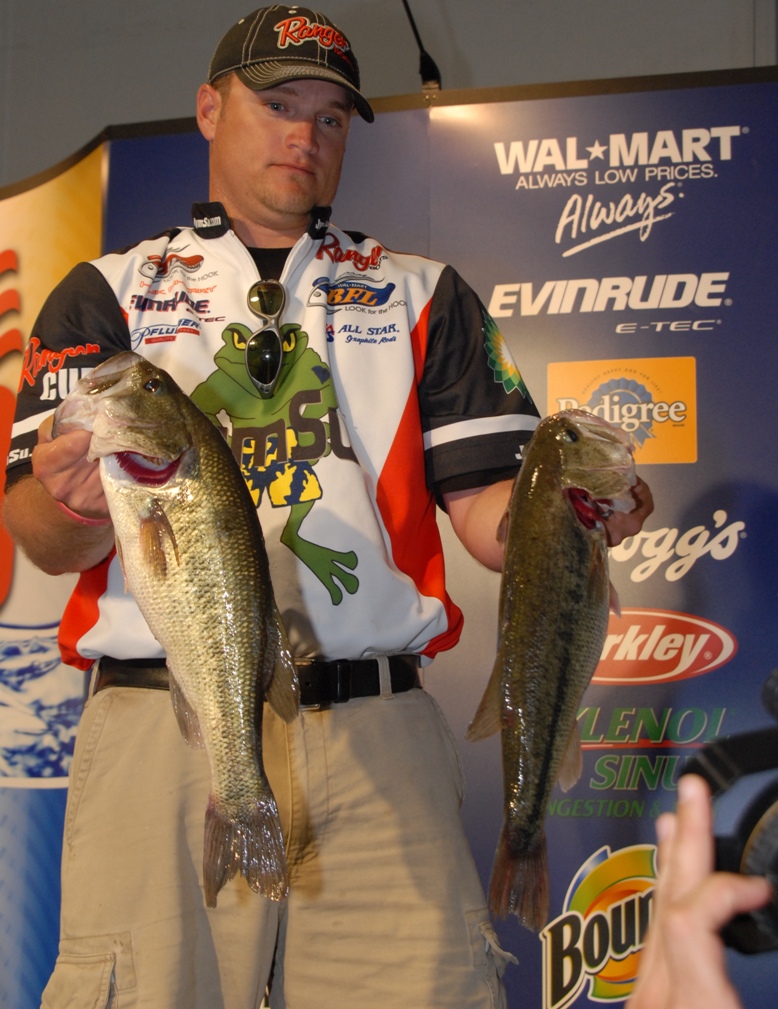 CONCORD, N.C. – Twelve pounds per day is a grueling pace to maintain on Lake Norman – just ask seven of the pros who sat in the top 10 after day one of the Wal-Mart FLW Tour National Guard Open and got dismissed today.

Only three anglers – Jim Moynagh, Greg Pugh and Jay Yelas – survived from the day-one top 10 to make the final round, which begins Saturday morning.

Today the leaderboard filled up with pros who were lurking in the teens and 20s yesterday, including local pro Hank Cherry of Maiden, N.C., who now leads the event with a two-day total of 26 pounds, 13 ounces.

Cherry sat in 15th place yesterday with 13 pounds, 13 ounces and brought another 13 pounds to the scales today despite losing most of his fishing day to motor issues.

“I only got to fish a couple of hours this morning,” Cherry said. “I caught five pretty quick, and that was it. I’m just glad I caught enough to make the finals before I had trouble.”

It may come as no surprise to Lake Norman locals that a) Cherry is leading, and b) he is catching them skipping docks with a jig.

“My primary pattern is skipping a jig as far back under docks as I can,” he said. “But I’ve also caught two good fish each day on a swimbait – a big swimbait called a Silent Killer by Deps Baits that’s about 8 inches long. I’ve got to thank co-angler Michi Oba for that. He fished with me during practice and gave me one.”

yesterday with 11 pounds, 1 ounce today to hold on to second place with a two-day total of 26 pounds, 4 ounces.

Like yesterday, Moynagh caught the bulk of his day-two weight on a Salmo Skinner muskie bait.

Moynagh said he is twitching and walking the lipped floating bait erratically and then letting it float to the surface and rest before starting the twitching again. He thinks some of the fish attacking the bait are guarding fry.

“The first hour of the morning is critical,” Moynagh said. “I’ll work it and twitch it around docks and shorelines, and that’s when the bigger fish really blast it. Once it gets later in the day, they’ll just come up and suck it down.”

Vic Vatalaro of Kent, Ohio, has demostrated solid consistency on Norman this week as well with catches of 13 pounds, 4 ounces and 12 pounds, 14 ounces totaling 26 pounds, 2 ounces for third.

“I’m concentrating my fishing efforts on postspawn fish,”Vatalaro said. “I’m fishing out closer to deep water near the channels on the last docks and lay-downs near the mouths of creeks or pockets.”

The Gain pro has dialed in a one-two punch of a weightless soft jerkbait and a big 1/2-ounce jig.

“I’m fishing both lures on the same cover,” he added. “The jerkbait seems to garner spotted bass, while the jig is more prone to catch the largemouths. So to cover my bases, I’m fishing both.”

FLW Outdoors fishing phenom Bryan Thrift of Shelby, N.C., has brought his A

game to Norman, sacking a two-day total of 26 pounds, 1 ounce for fourth place.

Thrift is in his comfort zone on Norman. Not only has he fished here a lot over the years, he is doing what he absolutely loves: skipping docks with a jig.

He is fishing 50 to 100 docks per day and only makes three to four skips per dock with a 1/2-ounce Shooter jig before running to the next dock.

“There are specific targets I am focusing on at every dock,” Thrift said. “Stuff like pontoon boats, boat lifts and certain dock bracings. I don’t really waste time fishing much of the dock itself. I’ve fished here so much that I’ve learned what the fish like to relate to around those docks, and that’s all I’m keying on.”

Greg Pugh of Cullman, Ala., clung to his sight-fishing pattern today to catch another 10 pounds, 12 ounces for a two-day total of 25 pounds, 6 ounces for fifth place.

Pugh says he has a few more fish on bed left for tomorrow, but their size is dwindling every day.

Rounding out the pros who made the top-10 cut in the FLW Tour event on Lake Norman:

Wal-Mart co-angler Trevor Jancasz of White Pigeon, Mich., is back to his FLW Tour

“Scott (Suggs) and I had a great day,” Jancasz said. “At the end of the day, he pulled up to a big submerged stump and said, `It’s all yours.’ He let me have the first cast to it, and I caught a 3-pounder that filled out my limit with a kicker.”

Suggs also turned Jancasz on to switching to a heavier a shaky head.

“I’d been using an 1/8-ounce head, and he was catching them right and left on a 1/4-ounce. So I switched to a 3/16-ounce, and it made a tremendous difference in getting bites around fry guarders. It seemed like they wanted that faster fall.”

Toby Stanphill of High Point, N.C., is in second place with a two-day total of 18 pounds, 5 ounces.

Jess Caraballo of Danbury, Conn., is in third place with a two-day total of 17 pounds, 14 ounces.

Pete Bridges of Tallapoosa, Ga., is in fourth place with a two-day total of 17 pounds, 14 ounces.

Donnie Hannah of New Lexington, Ohio, landed the big bass in the Co-angler Division weighing 4 pounds, 4 ounces, which also locked him in to fifth place with a two-day total of 17 pounds, 8 ounces.

Rounding out the co-anglers who made the top-10 cut in the FLW Tour event on Lake Norman:

The top-10 cut has been made. The top 10 pros and 10 co-anglers take to the water for final-round competition in the FLW Tour National Guard Open on Lake Norman Saturday at 7 a.m. at Blythe Landing located at 15901 NC Highway 73 in Huntersville, N.C.