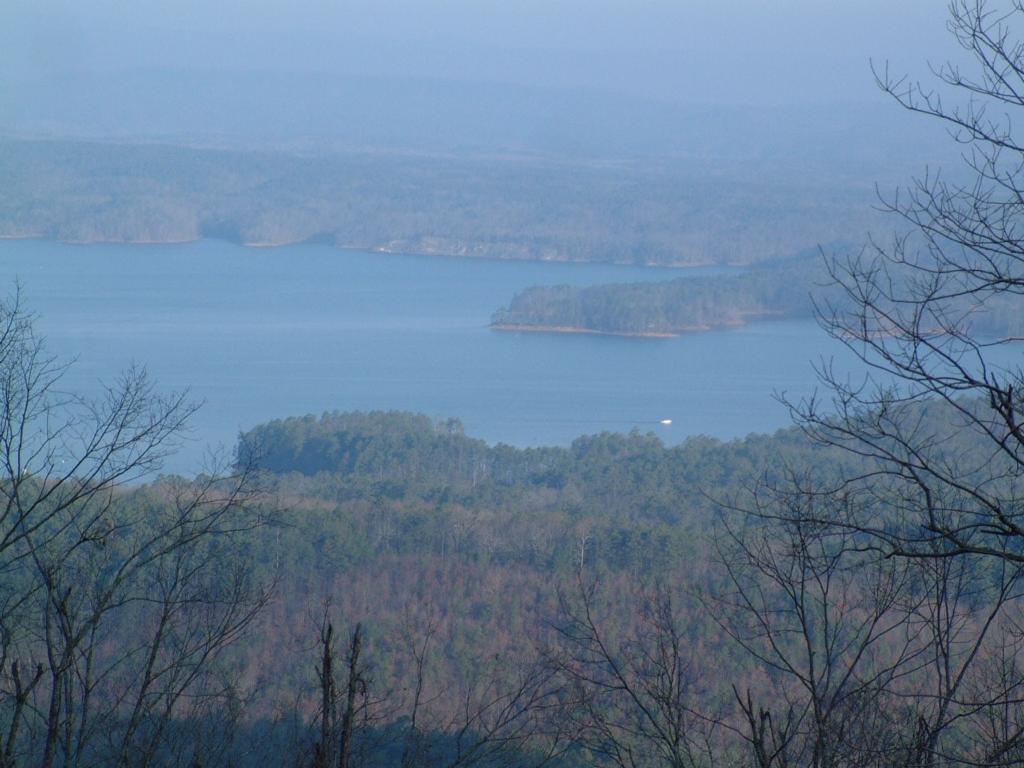 That’s sort of the scenario brewing for this week’s Forrest Wood Cup.

Reports out of Lake Ouachita during the practice session for the million-dollar showdown say the fishing has been somewhat grim.

“It’s bad, but it doesn’t really have anything to do with the lake,” said Scott Suggs, a pro out of Bryant, Ark., who calls Lake Ouachita his home water and is pinned as a pre-tournament favorite heading into the Cup. “This lake’s just absolutely full of fish, but it’s the dog days of summer. It’s just a tough bite right now.”

“The fishing’s pretty tough,” agreed fellow Arkansan Ray Scheide, from Russellville, who finished second at last year’s FLW Tour Championship at Logan Martin Lake. “The 13- and 14-inchers are not too hard to come by, but anything over 2 pounds is kind of tough. Catching a 2-pound average everyday is going to be pretty tough.”

Going deep in the grass

Ouachita is a deep, clear impoundment nestled in the hills overlooking Hot Springs, Ark. The height of summer has driven the bass into deeper water as they look to escape the high sun and hot early-August temperatures. Surface water temperatures are reaching the 80s. The consensus opinion is that Cup pros will have to focus their energies on a deep grass bite, sometimes fishing as deep as 20 feet, in order to have any success this week.

“It’s like this every single year, though,” Scheide said. “I think it’s just a characteristic of this lake. In the spring, I’ll often catch bags over 20 pounds, no problem. But once you get out of the good postspawn bite, they’re tricky to catch again until fall. This time of year, they suspend and are hard to get at. That probably lends its hand to the locals who know where they live in the summertime.” 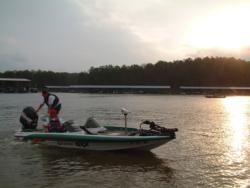 Lynchburg, Va., pro David Dudley is decidedly not a Lake Ouachita local. With the way the fishing is setting up, he was showing signs of frustration as the countdown to tournament time unfolded over the weekend.

“With a lake like this where you’ve got a grass line that goes for 20 miles, to find that one sweet spot is extremely hard,” he said. “There are so many factors involved with grass and brush piles that it takes a long time to find fish deep. Everybody I’ve talked to has caught one keeper a day or zero. Me, I’ve caught two or three keepers a day, but I know this: When I have to go and put 6-pound-test line on a spinning rod and throw a finesse worm all day, and then only catch two little bass, it’s time to get off the water for a while.”

Dudley has won two of the biggest paychecks in bass-tournament history, $700,000 at the 2002 Ranger M1 and $500,000 at the 2003 FLW Tour Championship, and is the richest pro in the history of FLW Outdoors with over $2 million in winnings under his belt. That’s why it’s compelling to hear his unorthodox practice strategy coming into this week’s $2 million Cup and its potential $1 million payout – and the prospect of some frustrating fishing.

“Me? I’m sitting here watching TV all day. I’m serious. I’m not even going out there,” he said late last week. “So much of fishing is about confidence, and the fishing right now is giving me a bad attitude. A lot of times, especially on a river, you just fish your instincts. When you don’t do that is when you get into trouble. Say you’re going down a river in practice and you see a downed tree that’s a perfect spot for a fish. You say, `Golly, that’s a beautiful laydown. It’s textbook.’ Then you go fish it for a while and don’t get bit. Then you go into the tournament and don’t go back to fish it again because of your practice. Then you hear somebody else caught a 6-pounder off that tree. That’s where confidence can come into play. So right now I’m not even giving myself a chance to find fish, but also not to get frustrated. I’d rather go out and fish with confidence, and I’m just playing my attitude game right now. You have to manage the time you spend out there not catching them, and I feel very confident even though I haven’t caught anything.”

Suggs is a local, but he doesn’t think the deep grass bite will necessarily be the deciding factor this week. He says the lake level and the water management have kept the bass scattered. 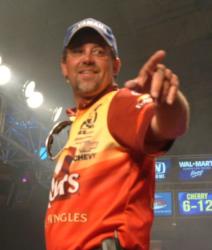 “I’ve beat the deep grass like a maniac all week, but they’re not positioning like that,” he said. “The water’s low, but we normally see it 4 to 6 feet lower than it is right now. They’re steadily pulling some water now, but I don’t think they’re going to be pulling it fast enough. By tournament time, that could be the deal, but these fish are making a move. It’s sort of a transition time right now.”

Still, all that being said, keep in mind the context here. As we all know, fishermen are notorious for stretching the truth, especially well-heeled tournament fishermen. When you crank up the stakes to a mind-numbing million dollars for an event, what are the chances that the pre-tournament mind games escalate in scale, as well? It’s possible that things are not as dire as they might want people to believe. After all, the bass in Ouachita do get pretty big; 6- and 7-pounders are not unusual. Consider this scenario: If the size of a pro’s pre-tournament verbal misdirection grows in direct proportion to the tournament’s final payout, then, based on the dire fishing predictions coming out of Ouachita, one might expect to see everybody coming in with 25 pounds a day at the Cup.

Maybe that’s not the case, but secrets are being guarded on the front end of this championship. Yes, some guys probably are having a tough time finding keeper bass. But it’s possible that others are downplaying the fish they have caught.

Consider the lengths to which Suggs has gone in order to keep his strategy – and his fishing holes – a secret this week.

“I’ve just been fishing unobvious places all week and, fortunately, I’ve been able to catch a few fish on those isolated spots,” he said. “I’ve practiced in a totally different boat and used a totally different truck than I normally do around here. I’ve tried to be as anonymous as I could.”

At a tough-bite tournament that seems to favor the locals, that’s a tried-and-true tactic. No doubt other pre-tournament Arkansans like Larry Nixon, George Cochran, Mark Rose, Rob Kilby, Ron Shuffield and especially Mark Davis – a Lake Ouachita local whom many picked as the odds-on favorite to win – have done the same thing.

Scheide, too, was reluctant to divulge much about his fishing before the big event. But he shrugged off any notion that he’s also a local favorite by pointing out that, while he’s fished it for many years, he actually lives some two hours away from Lake Ouachita.

“No, I don’t feel any pressure. The guys that make it to this tournament are so good that they take away local advantage that you might have,” Scheide said. “I’m just going to put all that local stuff on Davis and Suggs.” 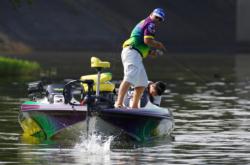 Still, local advantage or not, Scheide is well aware that he’s fishing for the biggest payout in bass-fishing history right in his own backyard.

“It’s a million-dollar tournament, so to me it’s all or nothing. I’m just going to fish wherever I’ve caught big ones before, and I’m either going to be a hero or zero,” he said. “I’m excited about it, for sure. You don’t get to do this everyday. I’ll tell you what, it makes me practice harder, that’s for sure. It’s 90 degrees and not a breath of wind out here, and I’m still out there practicing.”

Created in 1953 with the installation of Blakely Mountain Dam in the Ouachita River Valley, Lake Ouachita extends 30 miles and has a surface area of some 40,000 acres when at normal pool. With over a thousand miles of shoreline and more than 200 islands, there is ample room for fishing opportunities.