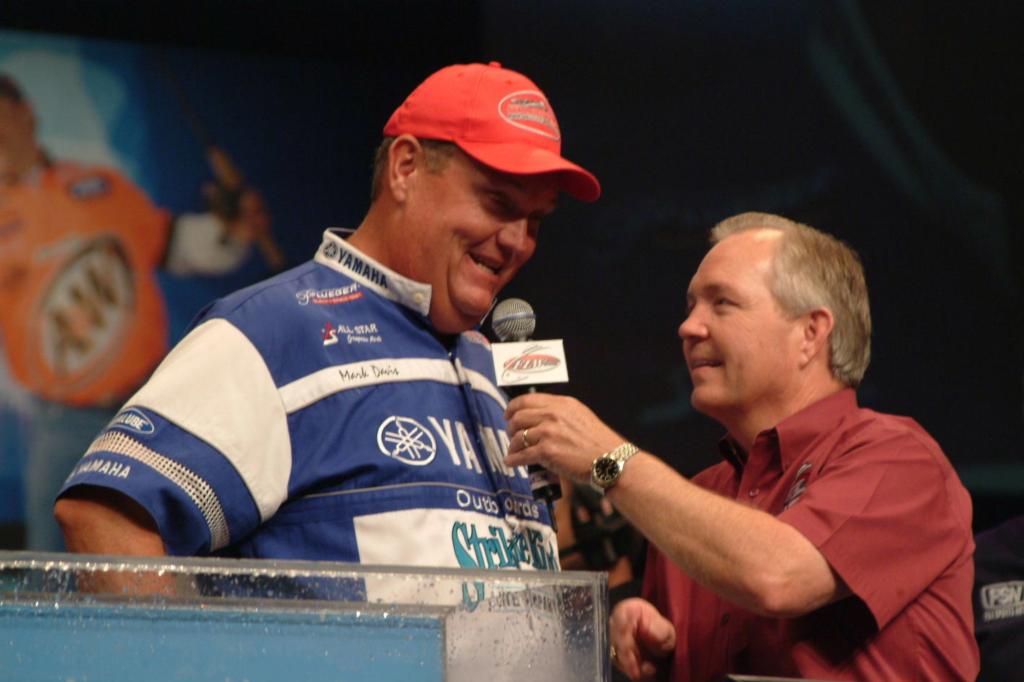 Mark Davis did well on day one, but he was surprised to find upon entering the arena that reports of his success were greatly exaggerated. Photo by Jennifer Simmons. Angler: Mark Davis.
August 2, 2007 • Jennifer Simmons • Archives

Rumor mill … In pretournament punditry, all eyes were on pro Mark Davis, an Arkansas veteran angler who could be considered a living legend. He did not disappoint, delighting the crowd with a five-bass catch clocking in at 12 pounds, good for seventh place. However, Davis found upon entering the arena that the 12 pounds he actually caught had become quite inflated via the tournament gossip mill. “The camera boats were overestimating the size of the fish I was catching,” Davis said. “There was a rumor I had a 5-pounder and a 4-pounder – I’d like to see that fish.” While Davis’ catch was solid, he was amused at the energy surrounding his entrance into today’s weigh-in. “I came in, and everybody was so excited,” he said. “It’s amazing how rumors get started, and we didn’t talk to anybody all day.”

He’s got your back … Davis may live in Mount Ida, Ark., these days, but Hot Springs is his hometown, and he’s very well-liked by the locals around here, including the chiropractor who worked on the back of No. 9 pro Shad Schenck. “I twisted my back when I jumped out of the boat on Monday, and by Wednesday, I could barely walk,” Schenck said. “We sat down with the doctor, and I said, `How well do you know Mark Davis? I want to walk out of here.'” Much to Schenck’s chagrin, the doctor went to high school with him. Nevertheless, he did not allow that to get in the way, as Schenck said the chiropractor was very helpful. But if Schenck does surpass local favorite Davis in the rankings, he might want to, er, watch his back.

Former champs threaten … Were it not for a ninth-place tie that bumped David Dudley to 11th, today’s Forrest Wood Cup top 10 would feature three former Wal-Mart FLW Tour champions: 2002 winner John Sappington is currently in third, and 1999 champ Darrel Robertson is in fifth. While the Forrest Wood Cup is a championship event that encompasses all FLW Outdoors bass-fishing trails, its forerunner is the Wal-Mart FLW Tour Championship, of which all three are previous winners. Sappington, Robertson and Dudley all caught five-bass limits and weights that registered in the double digits, a feat this week on tough Lake Ouachita. Said 2004 champion Luke Clausen, in 66th with a three-bass catch of 3-8, “I didn’t think it would be an issue to catch a limit.” Last year’s FLW Tour champion Brent Ehrler fared a bit better, coming in 19th and weighing in a limit worth 10-8. “I was worried about weighing in (one) bass,” Ehrler said. … All total, eight of the 10 former Wal-Mart FLW Tour Championship winners are competing in this event. In addition to the four mentioned above, David Fritts (1997 champ) is currently in 52nd, Dion Hibdon (2000 champ) is in 70th and George Cochan (2005 champ) sits in 76th.

Dudley dollars … Dudley’s flirtation with the top-10 cut – determined following tomorrow’s weigh-in – inevitably led to a discussion as to how and why the man formerly known as the “Manteo Machine” tends to step it up big-time in big-money tournaments. At only 31 years of age, Dudley is the top FLW Outdoors money winner, having earned more than $2 million in a little more than a decade. In 2002, he won $700,000 as the Ranger M1 champion, and a year later, he became the first angler to score the $500,000 top prize at the Wal-Mart FLW Tour Championship, the event that is now the Forrest Wood Cup, where he stands to win $1 million if he wins on Sunday. How does he do it? “I don’t know why that is,” Dudley said of his tendency to win big-ticket tournaments. “Maybe I concentrate more. It’s a mental game. I’ve questioned my own self about it.” … Behind Dudley on the all-time money list is Robertson, himself a former champion who is also in the top 10 after day one. Robertson is among the pros who stand to win $1 million, which would add to his previous earnings of more than $1.4 million.

What a month … It’s been a pretty good month for current pro leader Bryan Thrift. Not only did he earn the Gain Rookie of the Year title at the Wal-Mart FLW Tour season closer on the Detroit River in mid-July, he also got married just a few days ago on July 21. Now he’s leading the Forrest Wood Cup, and as a Ranger owner, he is now first in line for the $1 million top prize. But if he’s only been married for 12 days, how did he have time for a wedding, a honeymoon and pretournament practice? “We went to Charleston, S.C., for three days,” he said. Unfortunately, Thrift’s new bride, Allison, was not in the audience today to watch her 27-year-old husband sit atop the leaderboard. “She’s a new elementary school teacher,” Thrift said. “She didn’t have enough days off to take time for the honeymoon and this trip.” She was watching the coverage on FLW Live, though, and Thrift knows what the pair would do if he walks out of here Sunday $1 million richer. For starters, Allison would never miss a weigh-in again. “That would make all our dreams come true a lot sooner than we expected,” he said. “She could quit work and travel with me, which is our goal.”

Nice serve … Jack Wade, who qualified for this week’s event via the Wal-Mart FLW Series, is sitting pretty in 12th place with a day-one catch of five bass that weighed 11 pounds, 3 ounces. But he might have been in the top 10 if not for a wacky incident involving his co-angler partner, Aaron Martin. “My partner and I were talking about football and tennis,” Wade said. “He was a tennis player in high school.” Some of those tennis skills came in handy soon enough when Wade caught a keeper with plans that did not involve spending the afternoon in a livewell. “I set the hook on my third keeper, and it came off the hook,” Wade said. “(Martin) caught it in midair.” While Martin’s tennis-honed hand-eye coordination may have been intact, he might need to work on his footing. “I was already cheering when he stumbled across the boat and threw it 15 feet off the other side,” Wade said. We commend Martin for the effort, as he caught only one keeper himself that has him in 64th on the co-angler side.

1: Number of pro qualifiers who did not weigh in a bass on day one.

9: Number of top 10 pros who qualified via the FLW Tour or FLW Series.

27: Day-one finish of Robert Dodson, the highest of the six “grass-roots” pro qualifiers.

4: No. 9 Schenck’s finish the last time Lake Ouachita was visited by a major FLW Outdoors tournament trail (the FLW Tour, 2002).

120: Number of hours Schenck says he practiced in eight days.

“Hey, Mom, I’d like to stay in the family, if it’s all the same to you.” – Pro Craig Powers, who greeted his mother on FLW Live under the threat of disownment if he didn’t.

“Maybe I’m finding out why I work every day and these people fish every day.” – Co-angler Wayne Black, representing The Bass Federation, on coming up zero on day one.

“Let’s make sure those holes aren’t too big and they can’t get out.” – No. 47 co-angler Spencer Shuffield, joking that his 2-pound, 6-ounce two-bass catch might be so small they could escape the weigh-in box.

“I found out Mark Davis hired all the kids up there to ride jet-skis.” – No. 77 pro Woo Daves, attempting to explain his one-bass catch on day one.

“It takes you a lot longer to tie a knot when you think it could be the million-dollar knot.” – No. 14 pro Dave Lefebre, on the nerve-racking proposition of fishing for $1 million.