Fishing for a million 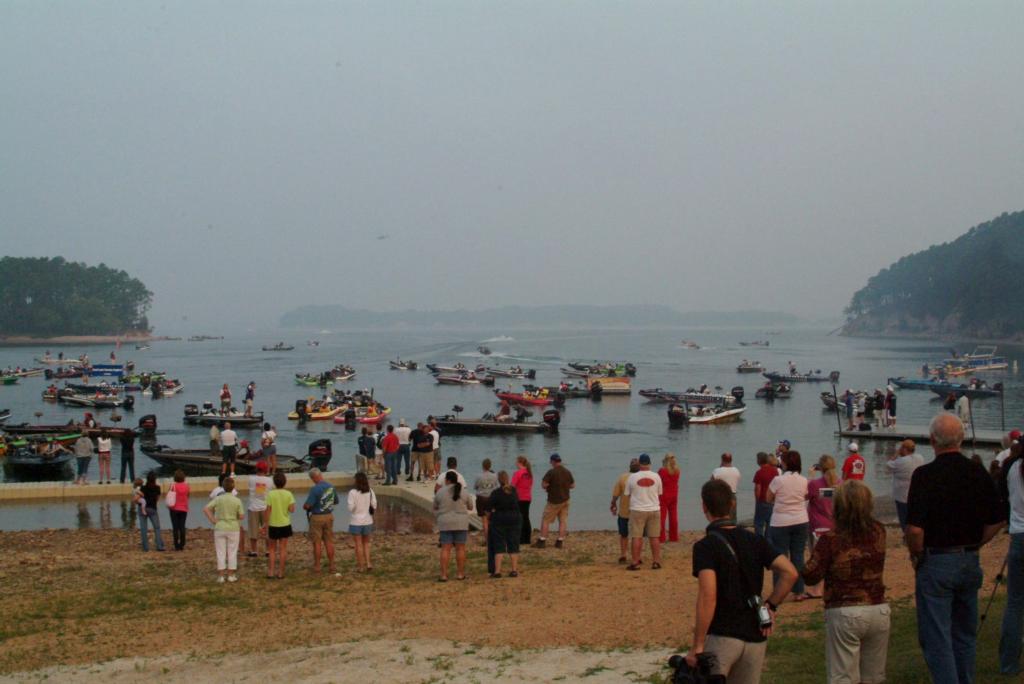 HOT SPRINGS, Ark. – It was not that long ago that bass pros drifted around in their boats before a tournament blastoff and filled the predawn air with comments like: “Man, did you see how much Jeff Gordon got for winning the Daytona 500?” Or, “Do you know how much Tiger won at the Masters? I wish our sport paid money like that …”

With the beginning of the 2007 Forrest Wood Cup on Thursday morning on Lake Ouachita, just outside of Hot Springs, Ark., the historical moment of one angler winning a million dollars in a bass tournament may be just days away.

One promise that FLW Outdoors Chairman Irwin Jacobs made when he introduced FLW Outdoors to the bass-fishing world in 1996 was that professional bass tournament payouts would soon far exceed most anglers’ expectations.

And FLW Outdoors has never retreated from that commitment.

Then in 1998, FLW Outdoors did what was unimaginable at the time: award $250,000 to the winner of the FLW Tour’ s season-ending championship.

From 1998 to 2002, championship winners Davy Hite, Darrel Robertson, Dion Hibdon and John Sappington all lined their bank accounts with $250,000 wins from FLW Outdoors.

And Jacobs’ promise of increased payouts was just getting started.

From 2003 to 2006, David Dudley, Luke Clausen, George Cochran and Brent Ehrler all had their lives changed by the top-prize windfall of a half-million dollars.

And now the next step is here: an unprecedented $1 million top prize for the bass-fishing championship, aptly named the Forrest Wood Cup after one of the sport’s true pioneers, Forrest L. Wood, who started Ranger Boats, thereby laying the foundations for the sport of competitive bass fishing.

However, not every pro in the Forrest Wood Cup is eligible to win the full million-dollar

payout. In order to take home the seven figures, an angler must be a qualified Ranger boat owner. If the winner of the Forrest Wood Cup is not a Ranger owner, the winning amount will be $500,000.

But the odds are in the favor of a million-dollar check being hoisted up over one angler’s head in Summit Arena in downtown Hot Springs on Sunday afternoon, as some 80 percent of the 2007 Forrest Wood Cup qualifiers are eligible for the full payday.

This morning as the 81 pro and 81 co-angler Forrest Wood Cup qualifiers idled around Lake Ouachita’s clear, green waters before takeoff, there was not much talk about the payouts in professional golf or auto racing. Instead, pros were quietly focused on their own million-dollar possibilities. In the morning silence, you could almost hear their collective prayers being offered to the fish gods.

And judging from words being traded at Wednesday’s pretournament banquet and meeting, a few extra prayers will be needed at Ouachita this week as fishing has been a test for many anglers.

For the last five days, a thick layer of hot August haze has choked the Diamond Lakes regions of Arkansas, and it does not look like anglers will get a break from the heat and humidity anytime soon.

What’s more, high water over the last few months has kept Ouachita’s deepest hydrilla edges from growing up thick and green to give summer bass a consistent refuge.

Local favorite Folgers pro Scott Suggs of Bryant, Ark., originally thought this tournament would be won by fishing through thick canopies of hydrilla in 18 to 20 feet of water.

“For the last two years, there has been a nice, lush canopy of hydrilla down there in 15 to 25 feet of water,” Suggs said. “You could see it on your depth finder and you could feel a heavy jig or plastic penetrate it – it’s just like pitching matted vegetation. And as soon as the lure popped through – boom – you’d get a bite.

“But the high water this spring has kind of suffocated that deep outside grass line. Now when you pitch a jig down there, it goes straight to the bottom and gums up with black strands of rotting grass. So I think guys are going to have to fish a little differently than what usually works here.”

Ouachita still offers miles of healthy, green hydrilla in 5 to 12 feet of water, but much of it is random and undefined. The crisp outside edges and canopies are not as prominent as they should be.

“The summer grass growth is just way behind because of high water,” noted 2007 Land O’Lakes Angler of the Year Jay Yelas. “The grass looks like it does in April or May, not August. And that just makes finding concentrations of fish difficult. There are still fish to catch, but it’s just one here and one there.”

FLW Tour pro and local favorite Mark Davis of nearby Mount Ida, Ark., has fished Ouachita heavily for 30 years, and he believes fishing will certainly be a challenge this week.

“Hot, clear water in August – I couldn’t script a tougher scenario,” Davis said. “It would not be so bad if the real deep grass was healthy, but with so much of their deep habitat gone, many of the bass have suspended. And that’s the key word here – suspended – the toughest kind of fish of all to catch.”

“I’m betting that 80 percent of the fish are suspended out there in the middle of nowhere,” he said. “Some of the fishing I’ll be doing this week will be over 70 feet of water. The fish may only be in 30 feet, but they’re over 70 feet, and they are tough to catch when they get like that.

“People might not believe it, but this lake is absolutely loaded with 2- to 4-pound bass,” he added. “I’m afraid this week is not going to properly represent just how many bass live in Ouachita.”

As far as top-10 cut predictions, Suggs, Davis and Yelas believe the top-10 cut will fall into the 16- to 18-pound range after the first two days.

“Eight or 9 pounds a day will be strong here,” Davis said. “And 12 pounds on any day will be a killer stringer.”

Daily weigh-ins will be held at Summit Arena located at 134 Convention Blvd. in Hot Springs each afternoon at 5.

On Aug. 4, the first 750 fans 14 and under will receive a free pair of Solar Bat sunglasses.

All of the Forrest Wood Cup activities will culminate on Sunday, Aug. 5, starting with the first 1,500 fans 14 and under receiving a free rod and reel.

At 4 p.m. multiplatinum recording artist Tracy Byrd will perform a free concert just before the 5 p.m. weigh-in where one FLW Tour pro could win the $1 million top prize.

And as if that were not enough, one lucky fan’s name will be drawn to win a new $53,000 Ranger Z-Comanche bass boat powered by Yamaha.

Admission is free to all Forrest Wood Cup events during the week.