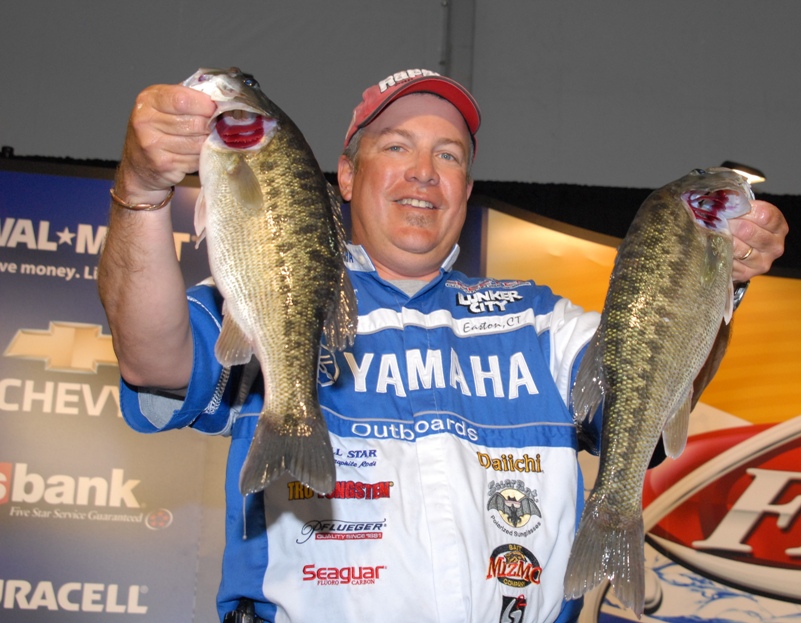 JASPER, Ala. — With temperatures soaring into the mid-80s, the Smith Lake bass finally committed to the bank. Rising water and cloudy skies had kept them at bay for the past few days, but that all changed as the water temperature reached 65 degrees. Bass-fishing fans take note – the second Wal-Mart FLW Tour qualifier has turned into a sight-fishing extravaganza.

Ironically, the biggest bag of the day did not consist of bedding largemouths. Instead, Yamaha pro Terry Baksay caught 14 pounds, 14 ounces of spotted bass.

Baksay said he is fishing in water as deep as 40 feet. His partner, Masahiro Yanase, also caught a five-bass limit and is leading the Co-angler Division. In fact, it was Yanase who started catching several fish on finesse tackle. After seeing the results, Baksay was wise enough to adjust.

“I was fishing painfully slow. And I hate fishing slow. I like putting the trolling motor down and going as fast as I can, so this is killing me. But when your partner starts whacking them in the back of the boat, you’ve got to kind of adapt. But it was fun. We each lost a few, broke a few off, but we caught a lot of fish.”

The Easton, Conn., native said he used both 6- and 8-pound-test line. He had located several bedding bass in practice, but he knew that was out of the question when he drew boat No. 190.

“We just covered a lot of water. I actually only fished four of my 10 spots. The key to the whole thing is bait. If there’s bait there, fish will be there.”

Knoxville, Tenn., pro Brandon Coulter is employing a unique strategy on Smith Lake. Using a Swim-O swimbait, Coulter is searching for bedding bass. The fish won’t eat the swimbait, but they will show 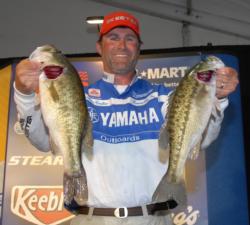 themselves as they chase it. Once the fish has revealed its location, Coulter will either throw a Pop-R or a black-and-blue Amp Craw. He also caught one spotted bass from 40 feet of water. The end result Thursday was a five-bass limit weighing 13 pounds, 13 ounces.

The second-place pro said two of his five keepers came up for the Pop-R and two succumbed to the Amp Craw, which he has rigged on two rods. One has an open hook for rocky cover, and the other is Texas-rigged for snarly brush.

“I caught my No. 5 with a couple hours left,” he said. “These fish are showing themselves on the Swim-O, and then I go back and locate the bed. I was boat No. 193 this morning, so I was very fortunate to get the fish I got.”

Despite having a great opening day, Coulter is concerned about tomorrow.

“I’m tickled to death to be in second, but I don’t know what else I can find. But with the pollen on the water, they’re tough to see – that’s where the swimbait comes in.”

Most bass-fishing fans would assume 29-year-old Clark Smith Jr. knows a lot about Smith Lake. After all, he lives in Pell City, Ala., just over an hour’s drive from the lake, and his last name matches the host fishery.

“This is the second time I’ve ever been on the lake,” said Smith, who has two Wal-Mart BFL victories to his credit.

Call it a fishy coincidence if you will, but Smith caught an impressive limit Thursday that weighed 13 pounds, 10 ounces. He’s fishing a stained, shallow-water area that is located 15 miles from the dam. Most of the fish are prespawn, but the area is perfectly suitable for bedding bass.

“I caught five keepers, all largemouths. I lost a 7-pounder this morning. That really killed me, but maybe it will bite tomorrow. I’m just staying in one area, fishing back and forth – looking for five bites.”

The FLW Tour rookie said he is using both a jig and a worm in water that is 4 to 6 feet deep.

“If I can just hang in there and make the top-10, I’ll be satisfied. The last day of practice I had 17 pounds 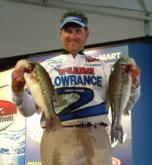 Tying Smith for third place with 13-10 is Norman, Okla., pro Mike Todd. Todd, too, is fishing shallow, but claims he isn’t purposely targeting spawners. His 13-10 was anchored by a stout 4-pound, 6-ounce largemouth.

“I’m sure a couple were on bed, but I couldn’t see them,” he said. “I was really fortunate; I had five bites today. Three of those fish came with an hour to go. It just really worked out.”

Strangely enough, Todd said his primary area muddied up and he had to resort to Plan B.

“My fish weren’t biting. If they don’t bite again tomorrow, I feel like I have a backup plan. To me, the biggest key when you’ve got clear water is that the fish aren’t used to it being muddy. It takes them a day or two to adjust. I’m hoping they’ll bite tomorrow.”

Plan B on day one meant junk fishing – using four different baits and working faster than the majority of the field.

“In practice, I just knew I was around the right fish. But I didn’t know an Okie could come to this lake with its ultraclear water and catch largemouths.”

ounces. Shaw was one of the first anglers to weigh in and set the tempo for a fast and furious afternoon.

“I’m pretty pleased with what I’ve got, but the fish are coming up, and the weights are going to be a lot better than everybody thought,” said Shaw.

Shaw is sight-fishing, which is no surprise since that’s how he won his last FLW Tour event. Coincidentally, that tournament was also held in Alabama – albeit on the TVA lakes of Wheeler and Guntersville.

Rounding out the top 10 pros on day one at Smith Lake:

Mark Hardin and Charlie Ingram tied for the Snickers Big Bass award in the Pro Division. Each angler caught a 4-pound, 7-ounce fish and earned $375.

In the Co-angler Division, the aforementioned Yanase leads the field with five bass weighing 11 pounds, 12 ounces. The angler from Nagoya, Japan, put on quite a clinic from the back of the boat. In fact, after Baksay saw Yanase’s finesse tactics working, he, too, decided to pull out the sissy stick.

“I can only do one thing tomorrow – my best,” said Yanase, a second-year co-angler. “Finesse worked well with today’s warm weather.”

Although he is still learning English, Yanase said he is very excited to be on top of the leaderboard. In his career, the biggest check he’s earned is $1,500, and he’d like to change that this week. No matter where he fishes tomorrow, he plans on once again using light tackle.

Larry Hostetler of Floyds Knobs, Ind., is in second place with five bass weighing 11 pounds, 1 ounce. This is Hostetler’s third year on tour, and one more solid catch would put him in his first top-10.

Rounding out the top 10 co-anglers on day one at Smith Lake:

Chad Pipkens of Holt, Mich., earned the day’s $500 Snickers Big Bass award in the Co-angler Division thanks to a 5-pound, 5-ounce fish.

Day two of FLW Tour competition at Smith Lake begins as the full field of 200 boats takes off from the Lewis Smith Dam at 7 a.m. Central time Friday for the second half of the opening round. Following tomorrow’s action, both fields will be cut to the top 10 anglers apiece based on two-day total weight.