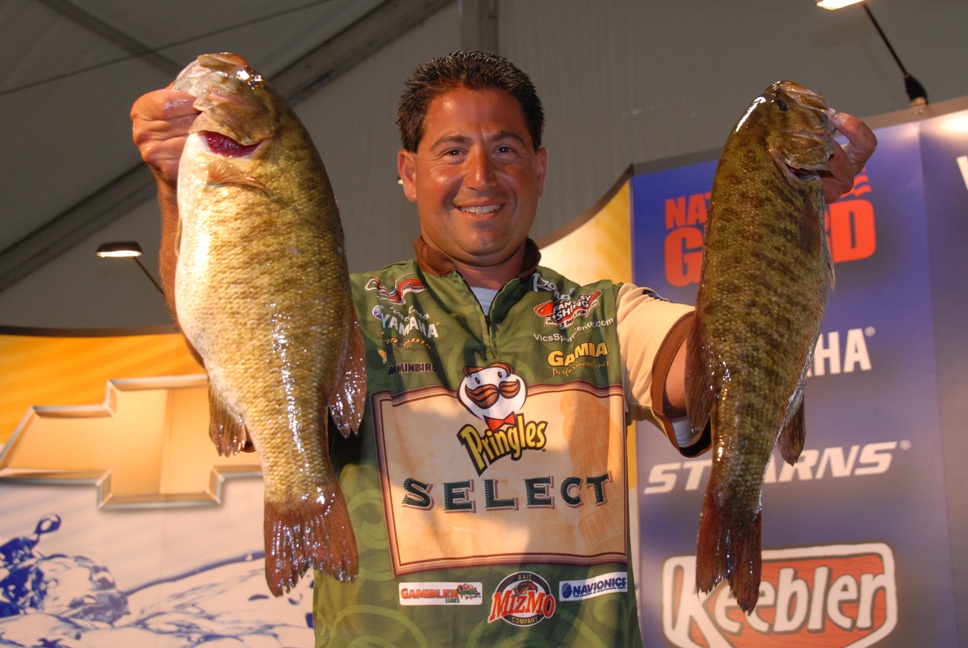 TRENTON, Mich. – Look out Lake Erie, your baby brother, Lake St. Clair, is starting to crowd you out when it comes to quality smallmouth.

The number of 20-pound-plus limits that poured out of Lake St. Clair on the opening day of the Wal-Mart FLW Tour Chevy Open in Michigan was impressive.

By a rough count, seven of the top 10 pros reeled in their limits from St. Clair today, including leader Vic Vatalaro of Kent, Ohio, who sacked up 21 pounds, 11 ounces.

But don’t count Erie out by any means. The second-, third- and fourth-place pros all represented from Erie with 20-pound-plus bags as well.

The most impressive statistic, however, is that these two lakes combined broke the FLW Tour all-time record for the day-one heaviest total catch. Pros and co-anglers together hauled in a grand total of 5,137 pounds, 6 ounces of bass today, surpassing the old record day-one catch from Lake Champlain in 2006 by 262 pounds.

Now that is some incredible fishing!

Tournament leader Vatalaro is known as a Lake Erie specialist, but he switched gears this week due to the sheer number of big smallies he found on St. Clair.

“I couldn’t get Lake Erie to do the job, so I decided to change up and go the other direction to St. Clair this time,” Vatalaro said. “My co-angler and I caught fish right off the bat on my first stop, and I’d say I had the limit I weighed in by about noon.”

As a testament to how many quality fish Vatalaro is on, his co-angler, Brandon Hunter of Benton, Ky., is in second place in the Co-angler Division with 19 pounds, 1 ounce.

Vatalaro described his best fishing spot as a “big area.”

“I’m trolling around in 18 to 20 feet, watching my depth finder carefully, looking for something specific – openings in the weeds – and when I see those openings, I pitch a Mizmo tube in the holes to get the bites,” the Pringles Select pro said. “I’m just hoping that this is the week that St. Clair can overpower Erie in terms of quality.” 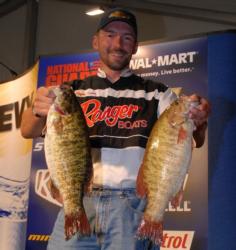 from the big lake to start the event in second place.

Coates is making a superlong run into Erie – some 70 miles one way.

“My plan is real susceptible to the wind,” Coates said. “It wasn’t that bad this morning, so I was able to get there in about an hour and a half and fish for four hours before I had to come back. And the fishing was not exactly easy, either. I had to really work to catch the ones I caught. I don’t know what’s wrong, but they’re not biting quite the way they should.”

Coates described his best area as being the size of a football field.

“There are several key spots within the area – subtle stuff,” he added. “I’m using a Berkley Gulp Sinking Minnow on a drop-shot rig – that stuff is dynamite.” 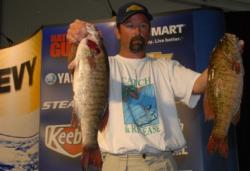 Like Coates, McCrone made a run of some 70 miles into Erie to catch is fish.

“The lake was an awesome run this morning,” McCrone said. “It was one of the easiest runs I’ve ever made out of Detroit. I probably got about five hours of fishing time once I got over there. I had to scramble around, though. I only caught seven keepers all day, and I fished depths from 12 to 29 feet.” 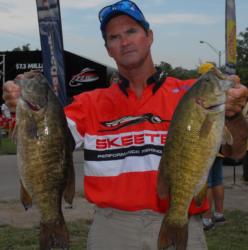 today to put him in fourth.

Hawkes made a 38-mile run into the big lake.

“It was a nice day,” Hawkes said. “The wind didn’t blow too bad, and that adds up to a lot more fishing time.”

Hawkes noted that he caught his fish “pretty shallow” for Erie, in 4 to 15 feet of water.

“I did stop out here on the river on the way back in and caught a 4 1/2-pounder right before weigh-in that helped me by about 12 or 13 ounces,” he added. “As long as the wind does not blow too hard, I plan to stick with Erie tomorrow.” 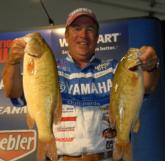 Back to the St. Clair camp, Terry Baksay of Easton, Conn., and Greg Vinson of Wetumpka, Ala., both reeled in 20 pounds, 10 ounces from the smaller lake to tie for the fifth-place spot.

Baksay said he had his first limit within minutes this morning.

“My best spot is a really big area in about 14 or 15 feet of water,” he noted. “The fish are keyed onto certain spots within that area. And the weirdest part is whenever I go for a while without a bite, I can crank up my boat, run about 100 yards or so, and as soon as I shut down, I catch one immediately. I swear it’s almost like the boat stirs things up and gets the fish biting.”

Vinson noted that he chose St. Clair over Erie simply because of his points standings on the FLW Tour.

“I was in 61st coming into this event, and I needed a good finish here to make the Forrest Wood Cup,”

Vinson said. “I knew St. Clair was a more conservative move, plus I had heard how the fishing had come on so strong at St. Clair from last year’s tournament. So I dedicated myself to St. Clair in hopes of just catching 15 or 16 pounds per day. Needless to say, I’m pleasantly surprised with this catch.”

Keith Monson of Burgin, Ky., caught the big bass in the Pro Division on day one weighing 5 pounds, 10 ounces.

Rounding out the top 10 pros in the Chevy Open on the Detroit River after day one:

Jerry Weisinger of Wyandotte, Okla., leads the Co-angler Division of the Chevy Open with 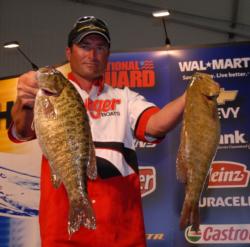 Weisinger rode shotgun out to Lake Erie today with Kellogg’s pro Dave Lefebre and boated a total of seven keepers behind him.

“I’ve never fished up here before,” Weisinger said. “I’m having a good time. I fished with Darrel Robertson in practice, and he taught me some of the stuff I used today and it worked well.”

Scott Gibson of Biloxi, Miss., is in third place with five bass for 18 pounds, 14 ounces.

Michael Marshall of Dawsonville, Ga., caught the big bass in the Co-angler Division on day one weighing 5 pounds, 4 ounces.

Rounding out the top 10 co-anglers in the Chevy Open event on the Detroit River after day one:

Day two of the Chevy Open on the Detroit River will begin at 6:30 a.m. from Elizabeth Park Marina located at 202 Grosse Ile Parkway in Trenton, Mich.