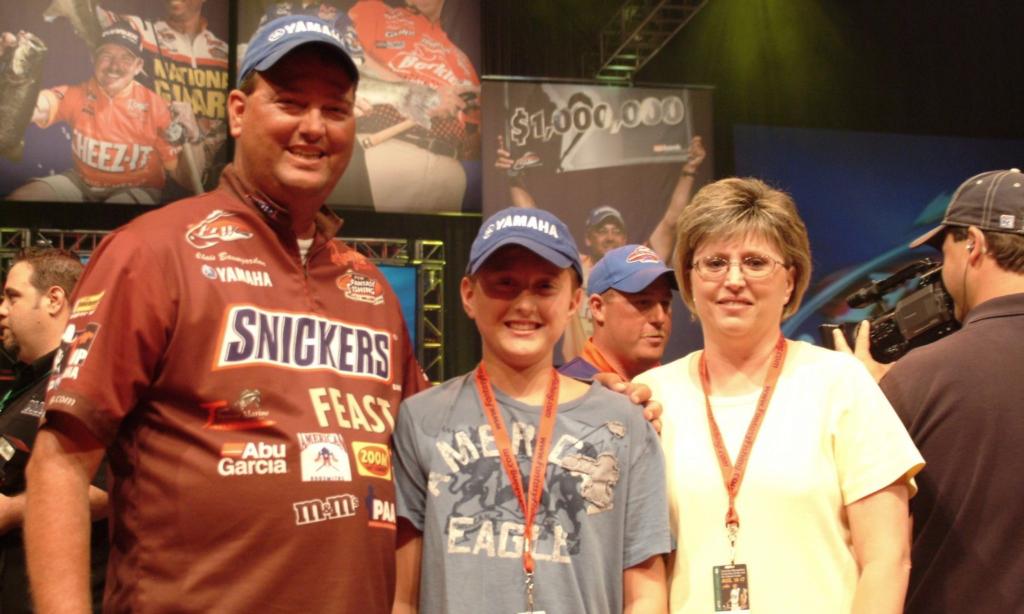 12-12 for Ryan’s 12th … When Snickers pro Chris Baumgardner came to the scale today, he had a message for his son. “I have to say happy birthday to my boy Ryan,” said the Gastonia, N.C., pro. “It’s his 12th birthday and he told me I needed to catch 12 pounds for him.” At the time, Baumgardner didn’t think he had met his son’s quota. To his delight, the scale read 12-12, which put dad into sixth place with a two-day total of 23 pounds even. “Twelve, twelve? I don’t believe it.” After weigh-in Ryan told his father he needs 16 pounds out of him tomorrow. No pressure dad.

Berkley boys get it done … Talk about a talented duo. On day two, Berkley pro Jay Yelas was 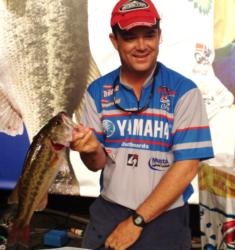 paired with Berkley co-angler Stetson Blaylock. After catching only a single bass on day one, Blaylock, the 2008 Castrol Co-angler of the Year, caught four keepers weighing 6 pounds to vault into 21st place. Yelas, the 2007 Land O’Lakes Angler of the Year, caught a limit weighing 12 pounds, 9 ounces to finish the opening round in eighth place. “I am catching my fish up near the (Saluda) river with Chigger Craws and Power Worms,” Yelas said. Over the two-day final round Yelas has the rare opportunity to become the first angler in professional bass fishing to claim the grand slam – which includes a Forrest Wood Cup win, a Bassmasters Classic win, an FLW Tour AOY title and a BASS AOY title. “One of these days I hope to win this tournament. It could be this year – I’m just taking it one step at a time.”

Weatherman lies … Day two on Lake Murray was supposed to be partly cloudy with high temperatures in the low 90s. Instead, the clouds stuck around and there were even sporadic showers in the early afternoon. On the lake, the temperatures were in the upper 80s – hot, but considerably cooler than what was experienced during practice. The lack of bright sunshine has been a dagger to the deep-water fishermen and a delight to the shallow anglers.

Zero to hero … In the Co-angler Division, Brandon Hunter redefined the saying “zero to hero.” 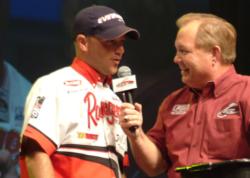 After literally not catching a single keeper bass on day one, Hunter caught a giant 11-pound, 13-ounce limit from the back of the boat Friday. That catch was the heaviest of the tournament among the co-anglers and it moved him from last place to seventh. And with the weights being zeroed for tomorrow’s final round, Hunter as good a chance as anyone at winning the most prestigious tournament in bass fishing. “My family is here in attendance,” he said. “I think they were planning on going home after today.”

Schooling bite fizzles … Two heavy hitters went down swinging on day two – one of them being pretournament favorite Anthony Gagliardi. The other was Chevy pro Larry Nixon, perhaps the greatest angler of all time. Both focused on schooling fish away from the bank. It worked well during practice and on the opening day of competition. But on day two, the wind changed directions and blew the baitfish into different areas. Gagliardi weighed only two small bass and Nixon managed just one – remarkable considering their immense talents. It was tough for Bee Branch, Ark., native to swallow but unbearably difficult for Gagliardi, who became the latest victim of the home-lake curse. “I picked the technique that would be the easiest to beat everybody else with – and that was schooling fish,” said the Folgers pro, who had his streak of making four consecutive Forrest Wood Cup cuts end. “With that in mind I fished deep during my whole practice. When the rain and cold front came through it just fell apart. I’m very disappointed but I don’t have any regrets.” 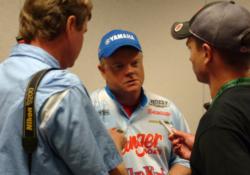 Underrated Rose … Only 7 percent of all FLW Fantasy Fishing Players picked Mark Rose. Hindsight is obviously 20-20, but for whatever reason Rose fails to garner the attention he deserves. Ever since he won the 2007 FLW Series Eastern Division event on Pickwick Lake, he’s been red hot. Throughout the year, the Marion, Ark., pro has been fishing with a heavy heart as his grandfather passed away in February. He cooled off somewhat in the summer months, but still finished 22nd in the Land O’Lakes Angler of the Year standings on the FLW Tour. He’s also currently third in the points race on the BP Eastern Division of the FLW Series. With over $700,000 in career FLW Outdoors earnings, Rose should be a household name. Perhaps a $1 million win on Lake Murray would help garner some attention.

34: Number of five-bass limits weighed by a field of 77 pros Friday. 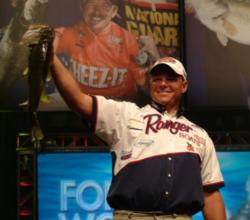 15-12: Weight, in pounds and ounces, of the heaviest stringer caught on day two by pro Terry Bolton.

74: Percentage of FLW Fantasy Fishing players who had David Dudley in their top 10. Dudley finished 14th.

67: Percentage of FLW Fantasy Fishing players who had Clark Wendlandt in their top 10. Wendlandt finished 54th.

54: Percentage of FLW Fantasy Fishing players who had Gagliardi in their top 10. Gagliardi finished 48th.

“My life story Charlie – I’m a little short,” – Castrol pro Carl Svebek, on both his fishing this week and his height.

“I had my weight by about 12 p.m. today and I just took it easy the rest of the way,” – Pro leader Michael Bennett.

“It felt like I fished 22 hours for those three bites,” – Exhausted pro Dan Morehead.

“I don’t think anyone has ever won two before – I’d love to be the first,” – National Guard pro Brent Ehrler.

“I lost one about 6 pounds too, so there’s definitely the right fish there,” – Yelas.

“I tried to catch a big one in there for about 2 or 3 hours this morning,” – Rose, who laid off his primary area for much of the day.

Tomorrow’s takeoff is scheduled to take place at 7 a.m. Eastern time at the Lake Murray Marina and Yacht Club, located at 1600 Marina Road in Irmo, S.C.