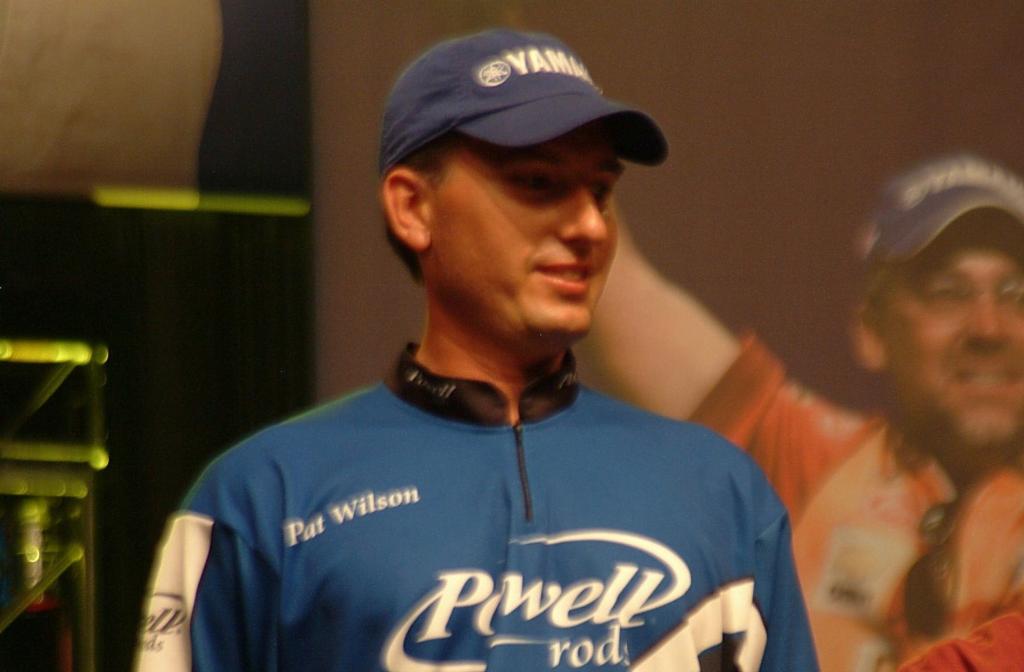 Pat Wilson maintained his lead in the Co-angler Division at the completion of the opening round. Photo by Brett Carlson. Angler: Pat Wilson.
August 15, 2008 • Gary Mortenson • Tackle Warehouse Pro Circuit

Like the opening day of tournament action where co-anglers managed a paltry eight five-fish limits, today’s field could only muster a scant seven. For the second day in a row, the entire field also failed to record even one double-digit stringer. And in the end, the top-two co-anglers in the standings on Thursday were still the top-two competitors after Friday.

“Yesterday I had my limit by 12:30 p.m. and today I had my limit by about 1 p.m.,” said Pat Wilson, a native of Penngrove, Calif. “I pretty much did the same thing as I did yesterday. I used soft plastics in about 5 to 10 feet of water, targeting bass on flats and breaks – mostly flats today. The main difference was that I didn’t have any fish in the boat at noon, which was kind of scary.”

While the lack of turnover atop the co-angler leaderboard wasn’t as compelling of a storyline for bass-fishing enthusiasts as today’s dramatic shakeup in pro standings, Wilson was more than happy with the status quo.

“It feels great. It’s awesome to be here at the Forrest Wood Cup for the very first time and wind up making the cut,” said Wilson, who recorded a two-day total weight of 16 pounds, 8 ounces. “I’m really excited to be fishing tomorrow.”

As far as tomorrow’s co-angler finals are concerned, Wilson said he doesn’t plan on changing things up too much, assuming his plan fits within the parameters of his pro’s fishing itinerary.

“I’m going to try and do the exact same thing tomorrow,” said Wilson, who boasts 14 top-10 finishes in his FLW Outdoors career since his rookie season in 2000. “I really have confidence in what I’m doing, but (my technique) will definitely depend on where my pro fishes. I’m excited, but I still have a job to do. Either way, I’m going to go out there and fish hard. But I’ll tell you what, I’d love to lead wire to wire.” 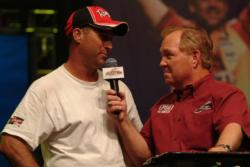 ” border=”1″ align=”right” />Chris Hults of Vancleave, Miss., used a total catch of 15 pounds to net the runner-up position for the second day in a row.

“It feels good,” said Hults, who qualified for this year’s Cup on the strength of his strong finish during the 2007 Stren Series. “I really don’t know what else to say. This is absolutely the biggest tournament I’ve ever fished in. Actually, it’s the first FLW tournament I’ve fished in all year. So to be able to come out here and make the top-10, it’s very exciting – and nerve-wracking.”

“I don’t think I caught two fish off of the same type of cover all day,” he said. “Basically, it takes a lot of hard work to catch a limit right now. And I didn’t get that many bites today. But as long as I keep fishing hard, I should be all right. I’m just going to have to wait and see what my pro is going to do and adjust to that.” 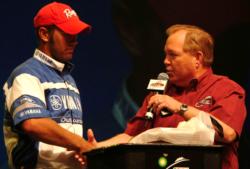 Heading into today’s competition, Teddy Bradley of Mishawaka, Ind., was holding onto a spot on the top-10 leaderboard by the slimmest of margins. However, after a strong on-the-water performance in today’s competition, he made sure that qualification for the top-10 cut would never be in doubt. Bolstered by an 8-pound, 9-ounce stringer on Friday and a total two-day weight of 14 pounds, 14 ounces, Bradley sailed in Saturday’s finals.

“I’m really pleased with how today turned out,” he said. “I was pretty sure that 4 pounds would get me pretty close to the cut. And when I caught that 5-pounder today, it was definitely a relief. It was more than I could have hoped for.”

However, with difficult fishing conditions omnipresent on Lake Murray for a second day in a row, Bradley acknowledged that it wasn’t easy.

“It’s been a tough grind out there for a lot of us,” he said. “And I was blessed with one good bite today. And that made all the difference.”

Bradley said that he targeted bass in less than 5 feet of water, throwing a rubber frog in and around pockets of “Gator grass” to land the majority of his catch.

As far tomorrow’s finals are concerned, Bradley said he is just going to go out there, do his best and hope that luck is on his side.

“It’s just going to be the luck of the bite tomorrow,” he said. “Whoever can get three good keepers in the boat or catch that one 5-pounder is going to be in really good shape. The whole year leads up to this. My goal all along was to make the cut and have a chance to fish for $50,000. It’s just huge. This is by far the best experience I’ve ever had fishing.” 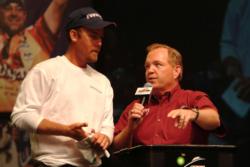 Rounding out the top-10 co-angler finalists at the 2008 Forrest Wood Cup: