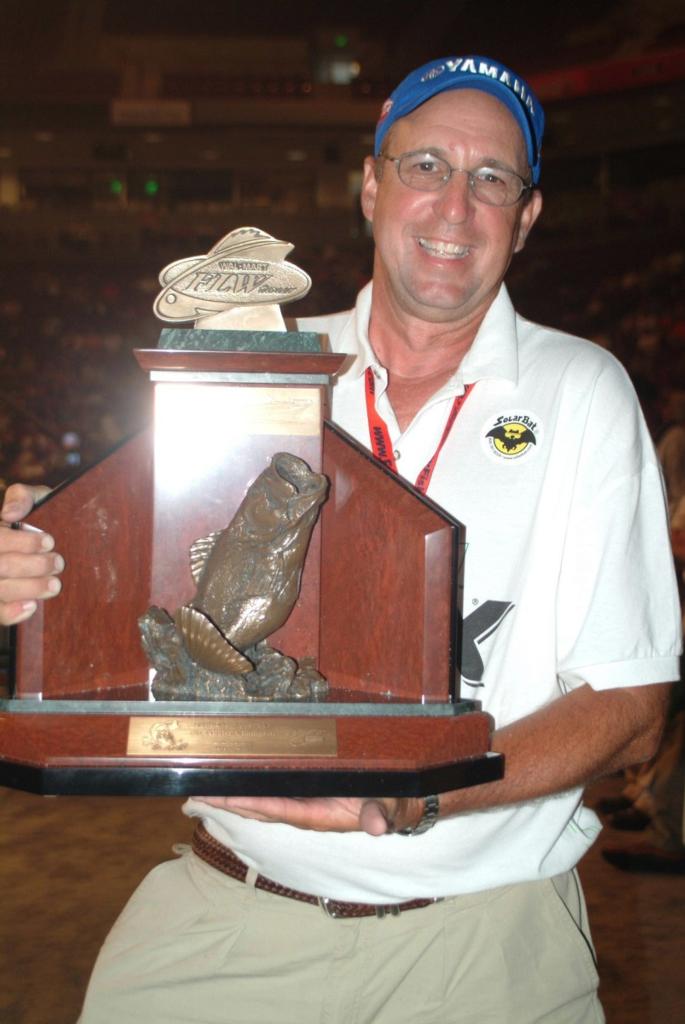 During that span, he recorded an astounding four top-10 and seven top-20 finishes – making him one of the most highly regarded co-anglers in FLW Tour history. However, despite that stellar track record in Cup competition, he never could quite pull off a victory when it mattered most.

That was … until today.

On the strength of a final day catch of 7 pounds, 15 ounces, Hudson finally walked away with the tournament title that had eluded him for more than a decade.

“Words can’t really explain what I’m feeling right now,” said Hudson, who took home $50,000 in winnings for his efforts. “This is by far my biggest win. This is my 11th (Cup) championship, so it feels great to finally get the win. I thought I was going to win it last year. I was leading after the first two days. But on the third day I only caught three fish. If I’d caught that fourth fish I would have won. So to finally get the win is just amazing. This is one of the biggest moments of my life.”

Heading back to the marina after today’s competition, Hudson was once again hopeful that he could pull out a tournament title. But after so many near misses, he didn’t dare get his hopes up too high.

“You never really know how things are going to turn out,” said Hudson, on his prospects before weigh-in. “But I knew the fishing was really tough out there for everyone. I fished a flawless tournament – I don’t think I missed one keeper bass all week. And that’s all you can ask for. So I was hopeful, but you just never really know.”

In the end Hudson’s perseverance paid off, finally eking out a win by a mere 12 ounces. 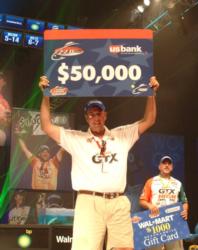 “To win one of these tournaments, the stars really have to line up,” he said. “I practiced four days for this event with Jay Yelas – and that never hurts. And then I drew three great partners. On the first day I got to fish with George Cochran. On the second day I drew Larry Nixon. And today I got to fish with (TBF National Champion) Brian Travis. All of those guys were great and put me on fish.”

Hudson, who fished with a spinning rod and jig-head worm all week, said the key was being patient and taking advantage of what his pros gave him.

“I fished shallow water about 80 percent of the time,” he said. “Basically, I was keying on shade areas. If there was a piece of wood with the sun shining on one side of it, I’d fish the other side. Wherever I found cover, I just fished the shady side of it.

“But this was a tough tournament,” Hudson continued. “Bites were at a premium. And any bite you did get, you had to capitalize on it.”

Although Hudson said he was going to cherish this win for a long time, he also waxed philosophical on the part-time profession that has been so good to him over the years.

“Fishing is all about having a good time,” said Hudson. “There are a lot of times when you go out there for hours and hours in the hot sun and it’s not exactly fun. But you have to make the best of it. And today, we made it fun.”

Today, Hudson made a little history as well. 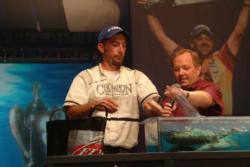 Although Brian Tidwell of Seneca, S.C., fished the tournament of his life, in the end he couldn’t quite pull off the victory. Bolstered by a final-day catch of 7 pounds, 3 ounces, Tidwell ultimately had to settle for second place.

“I had a great week and today started out so well,” said Tidwell, who took home $10,000 in winnings. “I caught a 2-pounder right away and a 3-pounder not long after that. At that point it was about 10 a.m. and I was feeling pretty good about my chances.”

And it was hard to blame him. With the co-angler field struggling all week – not one co-angler was able to muster a double-digit stringer the entire event – it appeared that Tidwell was well on his way to a tournament title. However, when it comes to the sport of fishing, any veteran will tell you that there are no certainties come tournament time.

“But then things really slowed down for me,” he said. “I caught two small fish over the next couple of hours. And I don’t think I caught anything after 1 p.m. I knew if I could just catch a limit I would win this tournament. So, in the end, it was kind of disappointing.”

Tidwell landed the majority of his catch fishing a Zoom Ol’ Monster June bug, targeting bass on shallow wood in 2 to 3 feet of water.

But while South Carolina native was indeed disappointed that he didn’t come out of the Forrest Wood Cup with a tournament title, he said there were plenty of things to be thankful for.

“This was a great opportunity for me,” he said. “I had my family here, got to fish with some great pros and had a really good time. And this was my best finish in a big tournament by far.” 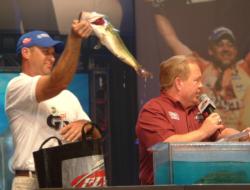 By the time weigh-in had concluded, Chris Hults of Vancleave, Miss., knew that his three lost fish during the final day of competition were the difference between third place and a tournament title.

“I’ll be honest with you. I lost three big fish today and any one of those three fish would have put me over the top,” said Hults, who ultimately netted $9,000 in prize money. “But at least I know I didn’t miss those fish because I did anything wrong. That’s just what happens when you fish the way we’re fishing today.”

Specifically, Hults said that his boat’s decision to fish in heavy cover naturally resulted in a high-risk, high-reward strategy.

“I was flipping a trick worm in really heavy grass cover,” said Hults, who recorded a final-day catch of 6 pounds, 7 ounces. “And when you do that, you’re going to lose fish from time to time. I just had a couple of fish get off before I could get to them.”

Although Hults would have like nothing more than to have walked away with a tournament title, he said that he had few regrets.

“I had a good time,” he said. “This was my first tournament of the year and I got to fish with some great guys. I learned a lot and had a really good time fishing all week.” 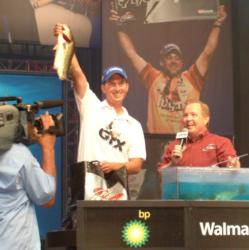 Pat Wilson of Penngrove, Calif., parlayed a 5-pound, 14-ounce catch into a fourth place finish and $8,000 in winnings. But while a tournament title was definitely on his mind after leading the Co-angler Division for two straight days, Wilson said he fished about as well as he could have during today’s competition.

“I fished really hard today and didn’t miss any fish,” said Wilson. “I had a great time this week. It’s just awesome to be here.”

Brandon Hunter of Benton, Ky., who caught exactly zero fish on the first day of competition, managed to storm back for a fifth-place finish in the finals. His final-day catch of 4 pounds, 4 ounces, earned him $7,000 in prize money.

Rounding out the top-10 co-angler finalists at the 2008 Forrest Wood Cup:

The fourth and final day of Forrest Wood Cup action in the Pro Division continues at Sunday’s takeoff, scheduled to take place at 7 a.m. (Eastern Time) at the Lake Murray Marina & Yacht Club, located at 1600 Marina Road in Irmo, S.C.