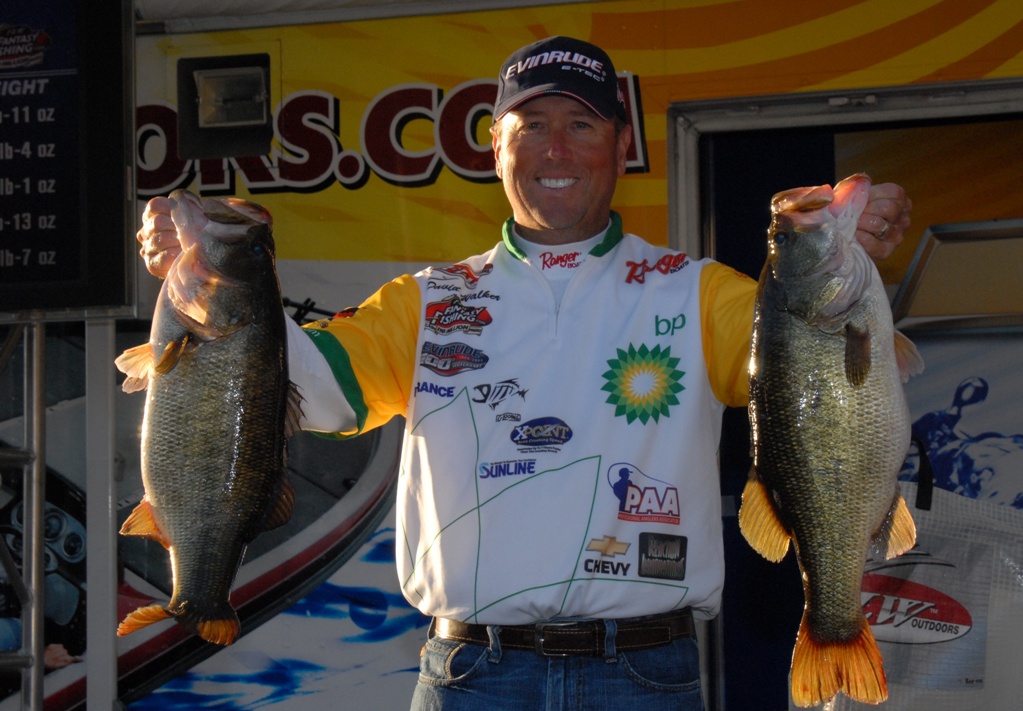 GUNTERSVILLE, Ala. – Day one of the Chevy Open on Lake Guntersville was just as advertised: Fishing conditions were ideal, pros and co-anglers blasted the bass, and at least one Walmart FLW Tour record was rewritten.

For starters, the weather was perfect – as some pros joked, almost “too perfect” – with sunny skies, temperatures in the mid-60s and very little wind.

Secondly, the big bass bit for many. In all, 15 limits over 20 pounds in the Pro Division and six in the Co-angler Division crossed the stage.

For clarification, that is not the heaviest single-day catch; that is the heaviest catch ever weighed on the first day of an FLW Tour event. The former record was 28 pounds, 7 ounces, weighed in by Joe Thomas on Kentucky Lake in 1997.

“Man, this feels good,” Walker said after weighing in. “I had no idea I had that much weight. These fish on this lake weigh a lot more than I thought. I’m floored those bass weighed that much.”

Actually Walker’s day did not get off to a blistering start. When he went to his first area, several boats already had him blocked out and that messed up his intended milk run.

“This kind of grass fishing is all about timing and being in the groove,” Walker said. “When I couldn’t get on that first spot, it threw me off my plan a little, and I didn’t get a bite on the first dozen or so places I went to. But I kept moving and checking water, and finally at about 10 o’clock, I caught my first good one, and then it clicked and I kind of got back into that timing groove. I stayed on that one spot for a while and ended up catching four of the ones I weighed there.”

Like many in the tournament, Walker is fishing grass with a rattling lipless crankbait around points where he believes the bass will eventually spawn.

“The problem is there is so much of that kind of productive water here, it’s unreal,” he added. “The hard part is knowing when to stop checking spots and actually settle down and fish to get into that groove where everything feels right. One thing that helped me with that today was being in the last flight.

“Even when I did not have a bite by 10 o’clock, I kept telling myself to settle down, relax and not panic – there’s still plenty of time left in the day. That definitely helped me get back into that critical timing groove and turn the day around.”

to begin the event in second place.

Fritts said that most of his fish were caught in 5 feet or less, but that he does have a couple of deeper “honeyholes” that produced his two biggest fish.

“I have to have something specific to throw at,” Fritts said. “I’m not real good at just thrashing down the bank, covering water. And I’ve got a couple of specific places like that, where I’ve caught them in the past. In fact, one of my better places I did not even go to today. After I caught that limit I weighed in, I went practicing a little more. My goal is to catch another 20 pounds tomorrow.” 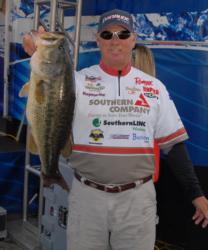 Tom Mann Jr. of Buford, Ga., brought in 25 pounds, 5 ounces on day one to start the event in third place. Mann’s limit was aided by a 9-pound, 3-ounce Guntersville giant, which took the Big Bass honors in the Pro Division worth $1,000.

Mann is coming off a fifth-place finish at the recent Walmart FLW Series event on Okeechobee and is starting his 2009 season with a bang.

And talk about being on fish: Not only did Mann catch a sack full of huge fish, but his co-angler, Terry Chapman, caught 24 pounds, 11 ounces behind him.

“I really have to thank Terry,” Mann said. “It’s only because of him that I got that 9-3 in the boat. I had that fish barely hooked in the side of the head and got her right to the side of the boat, and the lure popped out of her side, but Terry already had the net under her and scooped her up – it was unreal.”

Mann noted that his “secret” lures were a Rapala Rattlin’ Rap and Clackin’ Rap – both in red – fished over grass.

“There is a ton of fish in the area I’m fishing,” Mann added. “I`ve got one other boat in there with me, and he had 22 pounds today. But we’ve got our two areas marked out, so it’s no problem.” 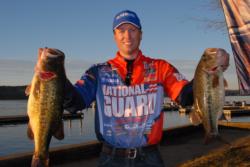 after day one with 24 pounds, 9 ounces thanks to an 8-pound lunker.

Ehrler caught a quick limit this morning and wanted to move, but was forced to stay in the area to protect it from other boats coming in, and it ended up being a blessing in disguise.

“Some of the boats in there saw me catch a few fish, and I knew if I left they would naturally come in there,” Ehrler explained. “I wanted to move to another spot really bad, but I stayed in there, mostly to guard the area, and a little while later I caught that 8-8. If I had left when I wanted to, I’d have never caught her, so it worked out for the best.”

Ehrler noted that he used a Lucky Craft rattling lipless bait and jerkbait in 2 to 6 feet of water to catch his fish.

Surman said he did not catch many fish – maybe eight or nine – but he got the right bites.

“I’m fishing a pretty long stretch of grass in about 4 feet of water with a Yozuri Rattlin’ Vibe, and I think I just hit a little wad of big ones moving in to spawn,” he said. “I caught most of that weight in about a two-hour span.”

Surman, too, is coming off a top-10 from the Okeechobee FLW Series (fourth), proving that momentum has at least a little bit to do with catching bass.

“This lake is similiar to Okeechobee in that you can get eight bites from an area, and they may weigh 12 pounds or they may weigh 24 pounds,” he added. “Like at Okeechobee I just happened to catch the right ones from my area.”

Rounding out the top 10 pros in the Walmart FLW Tour on Lake Guntersville after day one:

Jason Ober of Johnstown, Pa., leads the Co-angler Division of the Chevy Open on Lake 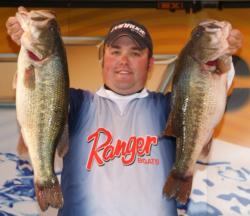 Guntersville with 25 pounds, 9 ounces. Ober’s leading weight was augmented substantially with the Big Bass in the Co-angler Division weighing 8 pounds, 11 ounces worth $500.

Interestingly, while most of the big catches were dominated by rattling lipless crankbaits in the grass, Ober caught his humongous limit off lay-downs with a jig.

“We hardly fished grass at all,” Ober said. “I caught all of my big fish off lay-downs in about 12 feet of water, slow-hopping a black -and-blue jig. I love fishing a jig, and when my pro said we were going to be pitching to lay-downs with jigs, I was in my element – that’s the exact way we fish back home when the water gets cold like this. You just have to fish that jig really slow and soak it for a long time.”

Fred Martin of North Little Rock, Ark., fished with Chevy pro Jay Yelas today and boated 25 pounds, 1 ounce from the back of his boat.

“Man, what a blast!” Martin said. “That’s the biggest limit I’ve ever caught in a tournament. After I culled once at about 2 o’clock, I finally sat down, quit fishing and gave Jay my rod, reel, lure and everything so he could catch some.” 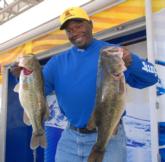 Chapman right behind in third

Terry Chapman of Stanley, N.C., boated 24 pounds, 11 ounces out of the back of Tom Mann Jr.’s boat for third place.

“It was just one of those days you dream about,” Chapman said. “That’s the biggest limit I’ve ever caught in a tournament.”

Greg Schultz of Wayzata, Minn., is in fourth place with 22 pounds.

Jeff Shelton of Cullman, Ala., rounds out the top five co-anglers with 21 pounds, 5 ounces.

Rounding out the top 10 co-anglers in the Walmart FLW Tour after day one:

Catch a video recap from each day’s action at the Lake Guntersville event with FLW Outdoors On-Demand video. To access the video, click here.