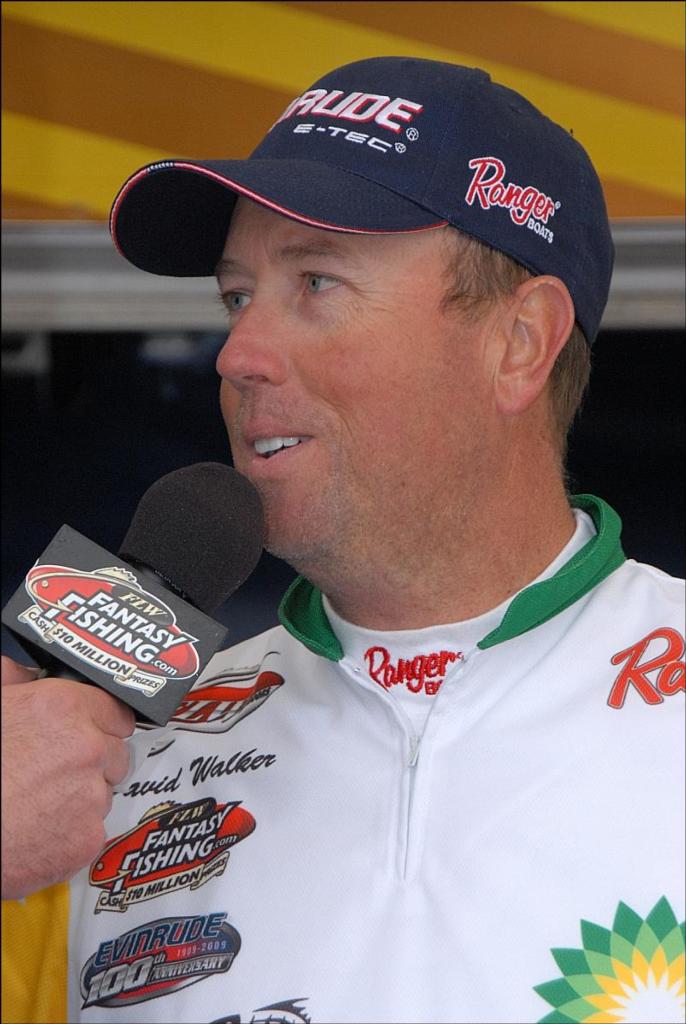 BRANSON, Mo. – If you want to know if the spring-time bass bite is on at Lake Table Rock in the Ozarks, here’s a real simple test: step outside. If you have to wear four layers and a snow suit just to walk to the mailbox, the bass are biting. However, if it’s sunny, pleasant and short sleeves are a possibility, leave the boat in the garage.

On day one, the Walmart FLW Tour event on Table Rock featured winter weather warnings with snow flurries and the bass – especially largemouth bass – bit like crazy. Today the weather actually got quite pleasant with a little sun in the morning and warming temperatures in the afternoon and the feeding frenzy came to an end.

As a result, Table Rock Lake tightened up quite a bit on pros today. There were only half as many limits weighed in (53 compared to day one’s 94) and the overall catch fell off by some 500 pounds.

Yesterday saw six limits over 20-pounds cross the stage and today no one broke the 20-pound barrier.

Three pros – David Walker, Michael Bennett and Shin Fukae – all defended their 20-pound plus stringers from day one with solid catches of largemouths again today to retain spots in the top five.

These three pros are all fishing far up one of the river arms, focusing on largemouths. Though they are not sharing the same exact area, they have all seen each other at one time or another in this same 10-mile stretch of river.

BP pro David Walker of Sevierville, Tenn., now leads the field into the finals at Table Rock with a two-day total of 40 pounds, 7 ounces. Walker backed up his 26-11 limit on day one with 13 pounds, 12 ounces today.

“I still caught plenty of fish today – 12 or 13 keepers – but it was not near as good as yesterday,” Walker said. “Some of that is because I did fish some more conservative areas, but some of it is the weather. When it gets sunny and warm these fish get a whole lot smarter. I can still catch them, but they are finicky about biting.

Walker is targeting specific objects in transition areas between winter water and shallow bays where the fish will spawn. In terms of lures, he has a one-two punch strategy.

In terms of running out of water or sharing productive water with other finalists, Walker is not worried.

“I’ve got about 10 miles of water to utilize,” he explained. “I’ve seen some of the other top guys up there and we might be fishing some of the same stuff, but I don’t know that for sure. I have not seen anyone on the exact places I’m fishing and there is plenty of water to fish. I’ll put it this way, I have not even fished half of the places I think I should be fishing so I have plenty of options the next couple of days.”

Bennett in the zone

Michael Bennett of Lincoln, Calif., caught one of the biggest limits of day two – 19 pounds 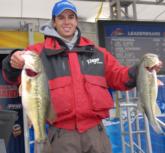 Bennett is an absolute master at dialing in on a daily pattern and running completely new water each day to fit that pattern. His two biggest FLW wins, including his 2008 Forrest Wood Cup victory, have come this way. And he is at it again.

“I fished completely new water today – places I’ve never fished before at all,” Bennett said. “Just like my other wins, I’m using some portion of my tournament days to scout new water for the following day – it’s almost like practicing during the tournament hours. It’s more about finding water that fits the pattern day to day and staying current rather than getting hung up on places I found in practice four days ago.

“I did start in the area I fished yesterday, caught one 3-pounder, but then realized it was dead and I moved on to newer pastures. That’s how I’m the most comfortable fishing – always looking for something new.”

Bennett mentioned that he, too, is employing a one-two punch in lure selection. One lure is a Tru-Tungsten jig, which has supplied a few key fish, but the other lure is a “reaction bait” that allows Bennett to cover a lot of water looking for the specifics of his pattern.

Folgers pro Scott Suggs of Bryant, Ark., holds down the third place spot going into the finals with a two-day total of 35 pounds, 6 ounces.

Suggs starts each tournament day on a deep spot, fishing for suspended fish to secure a limit and then heads to the bank to fish shallow and upgrade.

“Both days I’ve had a limit by 9 o’ clock,” Suggs said. “I’ve got one place where my boat sits over 130 feet of water; the fish are bunched up and I can catch them pretty quick. Getting a limit before I go to the bank helps me relax and I don’t have to worry about being hung out to dry by those shallow fish.

“Yesterday I caught 27 fish up shallow, but today I only caught five, so having a morning starting spot where I can secure a decent limit before I go hunting the bank helps tremendously.”

Chad Morgenthaler of Coulterville, Ill., is in the fourth place position with a two-day total of 34 pounds,

Morgenthaler has made his living the last two days in one creek. He has caught just 11 keeper bass, but keeping them all pinned up and getting them in the boat has allowed him to advance into the top 10.

“I’m fishing 6 to 12 feet of water,” Morgenthaler said. “I’m cranking, jerking and pitching a Lunker Lure finesse jig at docks whenever I come to one. I’ve stayed in this one creek mostly because of the way the wind is blowing – the creek lays out nicely for the wind direction. But if the wind changes tomorrow, I might move to some other water where I can use the wind to my advantage a little better.”

BP pro Shinichi Fukae of Mineola, Texas, rounds out the top five with a two-day total of 34 pounds, 4 ounces.

“It got a lot tougher on me today,” Fukae said. “I only caught 7 keepers. But I am committed to shallow cranking – that is all I will do for the next two days.” 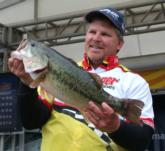 Rounding out the top-10 pros in the FLW Tour event on Table Rock Lake after day two:

Watson fishes the Rock frequently and knows what to throw. He finished 6th in the Stren Series Championship held here in the fall.

“Knowing the lake is certainly a big help,” Watson said. “Every drop of water my pro has taken me to the last two days I have fished at one time or another and I know what to do.”

Watson has rotated between three lures so far this week: a Wiggle Wart, a jerkbait and a Luck E Strike Twin-tail grabber grub fished on a 14-ounce head.

Day-one leader Zac Cassill of Fairfax, Iowa, is in third place with a two-day total of 20 pounds, 9 ounces.

Teddy Bradley of Mishawaka, Ind., is in fourth place with a two-day total of 19 pounds, 7 ounces. 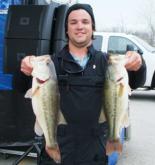 Dearal Rodgers of Camden, S.C., rounds out the top five co-anglers with a two-day total of 18 pounds, 13 ounces.

Rounding out the top-10 co-anglers in the FLW Tour event on Table Rock Lake after day two: