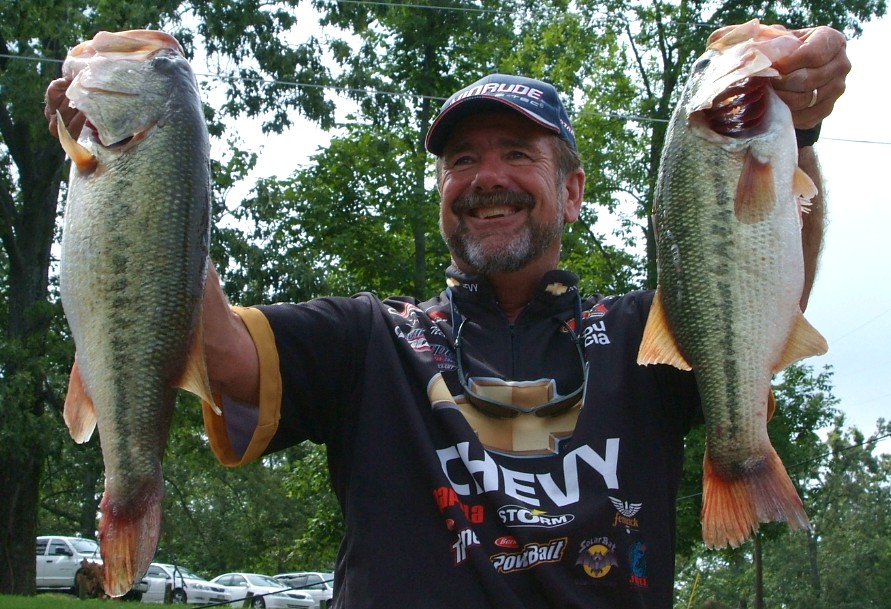 GILBERTSVILLE, Ky. – After an unbelievable opening day at the Walmart FLW Tour event on Kentucky and Barkley lakes, Larry Nixon had a relatively normal day two. Fishing the famed Kentucky Lake ledges, the Chevy pro calmly sacked 20-6 to retain his lead at the halfway point in the tournament.

Nixon remained tight-lipped about his presentation, although he did admit he caught his fish over mussel bars. Yesterday he said he used a Berkley Power Worm and a Berkley Chigger Craw. But with less wind and less current, Nixon said he shifted into finesse mode today.

“The fish just got un-aggressive,” he said. “I didn’t get a single bass from my best spot.”

“I am still happy. I am on the right fish, but they didn’t want to bite what I was throwing yesterday. I was hard-headed for awhile, but I learned a lot about their behavior in these conditions. If we have the same conditions tomorrow, that should really help.”

Nixon is running a considerable distance south, past Paris, Tenn., but he is not going as far as New Johnsonville, Tenn. For some reference, Paris is 40 miles south of the Kentucky Lake Dam Marina, while New Johnsonville is roughly 75 miles.

“I have been fiddling around on my way down; tomorrow I’m just going to go straight to them.”

Once he reaches his primary area, the Bee Branch, Ark., native fishes in approximately 12 to 15 feet of water. Thus far, boat traffic has not been an issue. When he’s by himself, he’s able to precisely dissect the deep-water shell beds. During the tournament, Nixon has been getting his fish early, but in practice he said his best fishing took place right around 1 p.m. That gives him added confidence for tomorrow.

“It’s all about mussel bars here on Kentucky Lake; but mussel-bar bass are gypsy bass, they’ll leave you in a hurry.”

Christie back for more 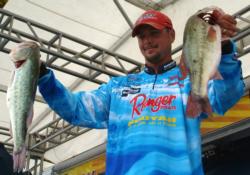 After leading the Walmart Open on Beaver Lake after day three, Park Hill, Okla., pro Jason Christie faltered on the final day – finishing the tournament in fourth place. But after two strong days, where he caught nearly identical limits of 21-7 and 21-6, Christie is back in the top 10.

“I’m throwing a Bomber Switchback and throwing it as far as I can and turning the rattle off in it and getting bites the other guys are missing,” said Christie, who now has 25 top-10 finishes in his FLW Outdoors career.

Christie said his Foxy Shad-colored Switchback bite depends largely on the current. Unlike most competitors, he is fishing exclusively on Barkley Lake. Although he casts in only 3 to 5 feet of water, the Switchback is a deep-diving crankbait. Essentially, the bait digs into the lake’s bottom, causing an erratic motion.

“I’m just keying on current. Today wasn’t very good, so we’ll see what happens tomorrow. I’ve got four schools of fish, and I’m just rotating between the schools until they fire up.”

David “Scotty” Young started the day by cranking in an area just south of Paris, Tenn. It was largely 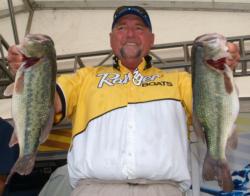 unsuccessful, so he switched to a jig. He still had no fish in the boat at 10:30 a.m., and things weren’t looking promising.

He then switched to a “mystery lure” and quickly caught his 20-pound, 14-ounce limit. Combined with his 21-12 from day one, Young accumulated 42-10, which was good enough for third at the end of the opening round.

While he caught a few fish later in the day on both the crankbait and the jig, his new lure was by far the best producer. The Mayfield, Ky., pro weighed four largemouths and one smallmouth.

“I like to utilize New Johnsonville as a backup plan if it goes south up here,” he said. “If I don’t have to make the run, I don’t do it.”

With increased recreational traffic from the weekend, Young expects the fishing to be tougher tomorrow.

“I think you’re going to see the weights fall off tomorrow. I think 18 a day (over the next two days) could win it.” 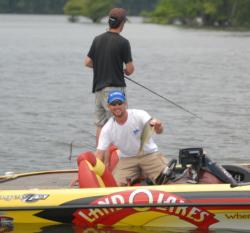 Knoxville, Tenn., pro Ott Defoe ran 55 miles south of the Kentucky Lake Dam Marina to his primary fishing spot. He was anticipating a great morning, but it never happened. On day one he had a limit by 9 a.m. Today, the Land O’Lakes pro had his five keepers by noon.

“The fish weren’t in the same areas today,” he said. “But I only fished down here for about seven hours the last day of practice, so I’m definitely still learning as I go.”

Defoe is mainly relying on a crankbait. He’s fishing ledges with shell beds and grass, but they are shallower than most. Either way, it’s clearly working. After adding 20-13 to his day-one catch of 21-6, his opening-round total was 42 pounds, 3 ounces.

“The stretch I’m fishing looks about the exact same as where (David) Dudley caught them last year on Fort Loudoun.” 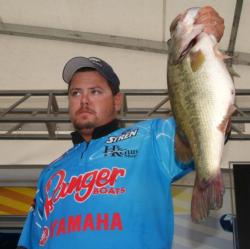 Hazard, Ky., pro Kenneth “Boo” Woods caught the heaviest limit of the tournament thus far Friday, a five-bass limit that weighed 24 pounds, 10 ounces. Included in that stringer was a 7-pound, 14-ounce giant, the Folgers Big Bass of the day. Amazingly, Woods said he broke off two fish that were even bigger.

“Those two fish were easy 8s,” he said. “So I think I can do real well tomorrow.”

It wasn’t fast and furious for Woods until he pulled up to a new spot at noon. At the time he had zero fish in the livewell, but by 1:30 p.m. he had all his weight.

“I am fishing real slow with a 1/2-ounce Slongs football-head jig with a Strike King Rage trailer.”

Woods is running 67 miles south and positions his boat in 32 feet of water. He throws the jig to 12 feet.

Rounding out the top 10 pros at the FLW Tour event on Kentucky and Barkley lakes after day two: 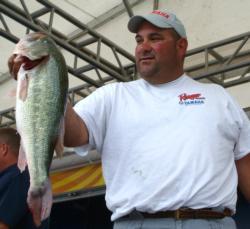 Dirk Davenport of Delaware, Ohio, caught 21 pounds, 4 ounces Friday, the heaviest five-bass limit of the tournament in the Co-angler Division. Combined with his 17-5 from day one, Davenport finished the opening round with a two-day total of 38 pounds, 9 ounces.

“The fishing was great,” said the co-angler leader, who drew Western pro Neil Russell on day two. “I’ve got a bait this week that I’ve had a limit out of the back of the boat the first 20 minutes or half-hour every day. It’s amazing. You throw it in there, and they eat it.”

Davenport described the lure as a “big plastic bait”, which he fished on a 1/4-ounce jig. He dragged the jig across, not directly down, ledges in 10 to 15 feet of water.

“I’m fishing the shells. Once you get your bait in the shells, they’ll bite.”

This is Daveport’s fourth top-10 finish in two years. 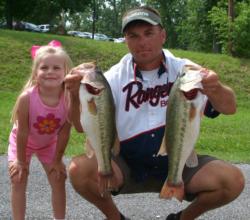 “I fished with George (Cochran), and he had one little spot that was full of fish,” he said. “Yesterday I fished with Ramie Colson, so I’ve had some great partners and I’ve had a great time.

Today Brown used a crankbait and a shaky head to catch his fish.

“I caught all of mine by 8 a.m. If we hadn’t caught them early, it would’ve been very tough.”

Scott Gibson of Wiggins, Miss., is in third place with a two-day total of 33 pounds, 7 ounces. He caught 18-15 yesterday and 14-8 today. This is Gibson’s second top-10 finish of the season, the first coming at Lake Guntersville, where he took ninth.

Mark Horton of Nicholasville, Ky., is in fourth place with an opening-round total of 33 pounds, 5 ounces.

Rounding out the top 10 co-anglers at the FLW Tour event on Kentucky and Barkley lakes after day one:

Day three of the FLW Tour event on Kentucky and Barkley lakes will begin Saturday at 6:30 a.m. at the Kenlake State Park Marina, which is located at 542 Ken-Lake Road in Hardin, Ky. Saturday’s weigh-in will take place at the Regional Special Events Center at Murray State University located at 1401 State Route 121 N. in Murray, Ky., beginning at 4 p.m.