While weights not huge, sacks way bigger than anticipated 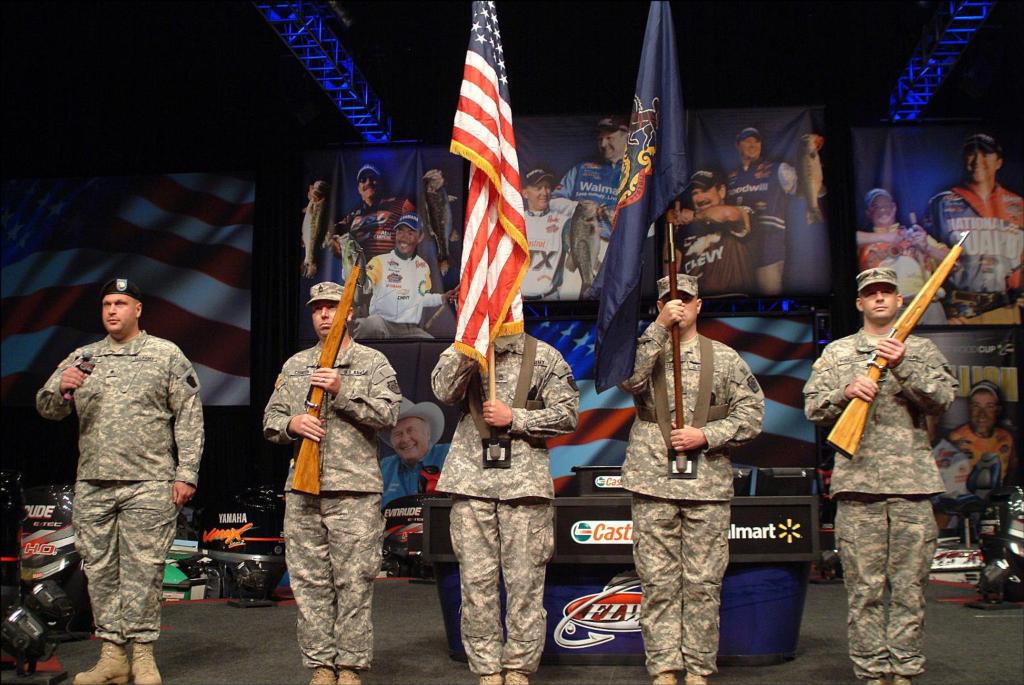 The National Guard kicked off the festivities just prior to the start of day-one weigh-in at the 2009 Forrest Wood Cup in Pittsburgh. Photo by Gary Mortenson.
July 30, 2009 • Gary Mortenson • Archives

Tournament truly up for grabs … The old adage that bass fishing is a game of ounces was never more clear than after the first day of Forrest Wood Cup competition in Pittsburgh. By the end of Thursday’s weigh in, pretournament favorite Dave Lefebre of Union City, Pa., held the overall lead by the slimmest of margins – 1 ounce to be exact – over second-place competitor David Curtis of Trinity, Texas. Veteran stick Larry Nixon (third) of Bee Branch, Ark., found himself 9 ounces out of first place while the entire top 10 of the pro leaderboard were separated by a grand total of 2 pounds, 10 ounces. “I’ll tell you what, it was a lot of fun out there today,” Lefebre said. “The weather was perfect.” Unlike most pro competitors, Lefebre was one of the rare Cup qualifiers who predicted that Pittsburgh would fish a lot better than the 2005 Bassmaster Classic (also held in Pittsburgh), where Kevin VanDam walked away with the crown after recording less than 13 pounds total over the course of three days. As it turns out, Lefebre was right on the mark, as the top three pros in today’s weigh-in all recorded stringers weighing at least 8 pounds, 4 ounces. “Like I told you,” Lefebre said with a sly grin, “the guys have been sand-bagging all week.” 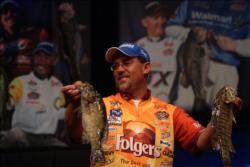 Suggs looks to repeat … With seven previous Forrest Wood Cup champions in the 2009 field, the prospects looked reasonable that bass-fishing fans just might see the first angler to net two Cup titles in FLW Outdoors history – a feat that has never been done before. However, if that is to be the case, it looks like all hope of that occurring rests with Bryant, Ark., pro Scott Suggs – who finished in fourth place in today’s competition with a 7-pound, 12-ounce stringer. Suggs, who became the first $1 million single-event winner in bass-fishing history back at the 2007 Forrest Wood Cup, said he thoroughly enjoyed his day on the water. “It was pretty fun out there today,” he said. “I fished flawlessly until the very end of the day. Now, with the standings where they are at, I think I only need two or three key bites tomorrow (to make the top-10 cut).” Unfortunately for the other previous Cup winners, it appears that most, if not all, are already out of the running for a second Cup title. To underscore this point, here is a list of the prior Cup winners in the 2009 field and where they finished after the first day of ’09 competition: Darrel Robertson (’99 Cup winner) 26th place; Brent Ehrler (’06 Cup winner) 30th place; Luke Clausen (’04 Cup winner) 45th place; Dion Hibdon (’00 Cup winner) 58th place; Michael Bennett (’08 Cup winner) 62nd place; and David Fritts (’97 Cup winner) 73rd place.

Yelas’ Pittsburgh struggles continue … When the Bassmaster Classic visited Pittsburgh back in 2005, legendary pro Jay Yelas of Corvallis, Ore., managed exactly zero fish over the first two days of tournament action. “That was the only tournament in my entire career when I didn’t catch at least one fish,” Yelas said. Although Yelas headed into the ’09 Forrest Wood Cup looking for some redemption, the fickle Three Rivers waterway handed Yelas yet another Pittsburgh defeat as the Oregon resident once again failed to catch a keeper bass. “I zeroed both days of the Classic in ’05, so I’m kind of used to it,” joked Yelas of his continuing futility on Three Rivers. “But I have a lot to be thankful for. I’m just going to go out there and have some fun tomorrow. Believe it or not, I love fishing here.”

Pretournament heroes … While most of the attention at Thursday’s Forrest Wood Cup centered around the day’s tournament action, one of the most compelling stories of the entire event actually transpired during Tuesday’s final practice session. While pro qualifier Jason Borofka of Salinas, Calif., and co-angler practice partner Kevin Moore of Reno, Nev., were out on the water scouting fishing locations under the Ambridge-Aliquippa Bridge, they suddenly saw a man on the shoreline frantically waving his arms. As it turned out, the man was trying to get some help for his friend who was out in the middle of the river and on the verge of drowning. “We saw somebody waving us down,” said Borofka. “At first we didn’t see anyone, but then my partner saw a hand sticking out of the water about 400 yards away. We raced over there, and my partner grabbed her hand.” It was a good thing too, because according to published reports, the woman would have almost certainly drowned. “We were able to get her back to the bank, but she was exhausted,” said Borofka. Thanks to Borofka and Moore, the woman is expected to make a full recovery. 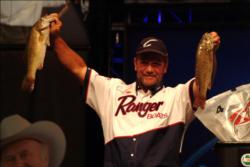 Showing the pros how it’s done … After netting a 7-pound, 10-ounce sack, day-one co-angler leader Tommie Goldston of Gardnerville, Nev., had the impressive distinction of outfishing a whopping 72 of the 77 pro anglers comprising the 2009 Forrest Wood Cup field. “I’ve had an awesome time so far,” said Goldston. Needless to say, Goldston’s pro partner in Friday’s competition just might have some mixed emotions riding with such an impressive amateur stick.

1: Total first-place prize award, in millions of dollars, earmarked for the winner of the 2009 Forrest Wood Cup.

2: Total purse, in millions of dollars, at stake at this week’s 2009 Forrest Wood Cup.

114-3: Total weight, in pounds and ounces, of fish caught on day one by co-angler field.

262-1: Total weight, in pounds and ounces, of fish caught on day one by pro field.

“I think I was leading this entire tournament after I caught a fish in the first five minutes. But then things kind of went downhill from there.” – Forrest Wood Cup pro competitor Art Ferguson III, making light of his 57th-place finish in today’s competition.

“Pittsburgh is obviously a challenging fishery, but I think the FLW guys are up for the challenge.” – Forrest Wood Cup co-angler Kevin Hawk.

“I have a lot of momentum right now. I’m fishing with a lot of confidence.” – Forrest Wood Cup pro Scott Martin, commenting on how he’s trying to parlay his recent FLW Tour title on Lake Champlain into a 2009 Cup title. 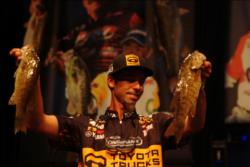 “Oh man, that’s a great start. When you can catch five keepers here, you should be proud.” – Pretournament favorite Mike Iaconelli, commenting on his fifth-place finish in today’s competition.

“I’m so happy that I caught five fish. I wasn’t even sure I could even catch one.” – Forrest Wood Cup pro Rusty Salewske, who was more than happy with his ninth-place finish in today’s competition.

“I’m having a great time. I prefished with David Fritts, and I drew Larry Nixon today. It’s just been awesome. And this is only my first year, which shows you that anybody can do this.” – First-time Forrest Wood Cup co-angler Tommie Goldston of Gardnerville, Nev., who netted first place overall in the Co-angler Division after posting a stellar 7-pound,10-ounce catch in today’s competition.