Ehrler at another level 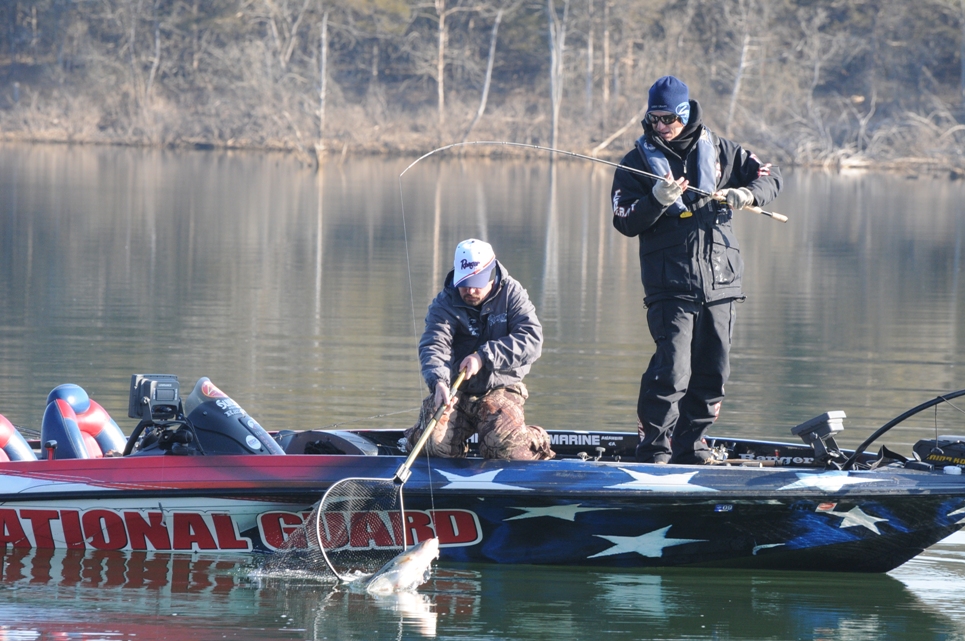 BRANSON, Mo. – On the Bassmaster Elite Series, there is Kevin Van Dam, and there is everyone else. On the FLW Tour, there is Brent Ehrler, and then there is everyone else. What Ehrler has accomplished in the sport of professional bass fishing the last three years is nothing short of remarkable. And what he’s presently doing to the Table Rock Lake bass is downright incredible.

In what has been a difficult event for most, Ehrler is putting on a classic prespawn clinic. How good was it? At 9 a.m., when FLW Outdoors writer Rob Newell caught up with him, Ehrler already had an 18-pound limit in the boat. In his first 30 minutes, Ehrler boated eight keepers; the two biggest were healthy largemouths that went over 5 pounds.

After catching his second kicker from his primary area, Ehrler attempted to describe his emotions.

“Man I am so excited; my heart is thumping so hard right now,” he said. “This is awesome.” 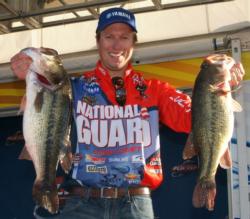 At weigh-in, Ehrler still hadn’t calmed down. He described the point he’s working as the best prespawn spot he’s ever fished.

“I’ve never found a spot like this before. I basically found it out running around looking at my Lowrance electronics. It’s basically just an underwater point, and there’s a ledge that goes from shallow to deep. I’m fishing the deep side of the ledge over the trees with reaction baits.”

Ironically, Ehrler’s biggest fish in his 22-pound, 2-ounce limit didn’t come from his primary area. He left the magic spot a little after 10 a.m. and attempted to locate similar areas. He found nothing with similar capability, but the upgrade helps – especially now that the FLW Tour has a four-day, accumulated-weight format.

“The best part is that no one’s been there yet,” Ehrler continued. “But I’m worried someone might poach in. You just never know. If they don’t, I think I can win the tournament there. It’s a staging spot that could get better as the water warms. And I’m not worried about wind or any weather condition. It’s one of those spots where that doesn’t matter.”

With a two-day total of 38 pounds, 8 ounces, Ehrler will take an 8-pound, 5-ounce lead into day three.

“I’m so excited to get back out there tomorrow.”

In second place is Hot Springs, Ark., pro Mike Wurm, who caught 16 pounds, 14 ounces on day one and 13 pounds, 5 ounces on day two. While Ehrler is fishing for a reaction bite, Wurm is dragging a 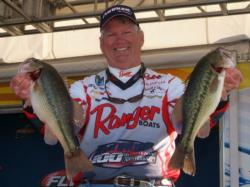 small jig on the bottom in a painfully slow fashion. This is the exact method he used to win the 1999 FLW Tour qualifier on Lake Murray.

“Today was almost a carbon copy of yesterday, except that I didn’t get a 6-pound kicker,” said Wurm. “I had my limit of largemouths by 11 a.m., and I made two culls.”

Wurm is running 45 minutes one way to get to his honeyhole. This area is large, and within it he has four different points and banks upon which he focuses. Once he’s there, he pulls out an Eakins’ jig with a Zoom Critter Craw trailer and fishes in approximately 25 to 30 feet.

“I love to throw a finesse jig on a spinning rod, and now I’ve figured out how to make it even better. I’m using 10-pound braid with a 10-pound fluorocarbon leader, and that is the difference. I’m setting the hook quickly, and it’s going directly into the top of their mouth. And the braid helped a lot too with those tree fish. The line does not break near as bad.”

While Ehrler is worried about other anglers encroaching, Wurm has no such problem. He’s boat No. 1 Friday morning, and he runs an Evinrude-powered Ranger boat. 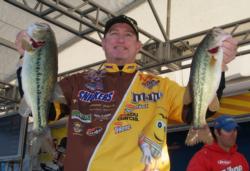 “It was much tougher,” said the Cullman, Ala., pro. “I caught four keepers, four non-keepers, and I lost three. I got 11 bites.”

Three of those keepers were largemouths, and the other was a “lost” spotted bass. Pugh says, despite the slower day, he’s still confident with where he’s at – both literally and figuratively.

“I know there’s fish there – good ones too. But today the wind blew up the creek, and yesterday it blew with it. I think that really affected me. The sunshine is good though; it helps bring them into the trees.”

Three ounces behind Pugh is Shelby, N.C., pro Bryan Thrift. After catching 14-13 on day one, Thrift 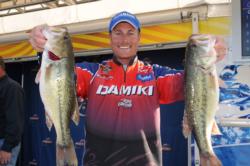 sacked 14-3 today to bring his total weight to 29 pounds even. Like most of the top pros, Thrift has been capitalizing on a strong early-morning bite.

“Yesterday morning I got bites on just about every cast; it was incredible,” he said. “Today I was a little worried at first because I didn’t get a bite on my first three casts.”

But the action quickly picked up as Thrift received eight bites in the next 30 minutes. Four of those were keepers, and he boated all four. That’s noteworthy because he would have made the cut last year at Table Rock if not for missed fish.

“After that, I ran a long ways to my other place and caught my fifth keeper on my first cast. And that was it. I caught four largemouths and one spotted bass.”

“This is a totally different pattern from what I did last year. Last year I fished standing timber, and the areas I caught my fish would never replenish. I think my best spot is replenishing this year, which is good because No. 2 isn’t as good.” 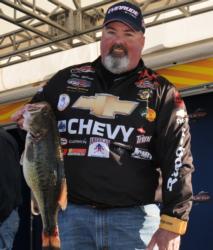 Hibdon storms back for fifth

After catching only two bass for 4 pounds, 8 ounces yesterday, Chevy pro Dion Hibdon stormed back with a 21-pound, 2-ounce limit today. At the halfway point in the tournament, his two-day total stands at 25 pounds, 10 ounces.

Hibdon is a noted deep-water fisherman who excels in the Ozarks. He calls Lake of the Ozarks home, but has quite a track record on Table Rock as well. Last year he finished 16th, one place ahead of his father, Guido.

Rounding out the top 10 pros at the FLW Tour event on Table Rock Lake after day two:

In Thrift and Rose, Shane Melton has been paired with two of the best anglers in the sport of bass 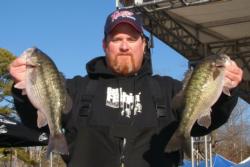 fishing. But credit Melton for making the most of his opportunities. While he caught an impressive 13-pound, 9-ounce limit with Thrift, he managed 6 pounds, 15 ounces with Rose. Melton’s day-two catch came on three bass, two of which were largemouths – the other a spot.

“I really figured if I could catch 6 or 7 pounds a day, that would be good enough. When I put those three in the boat, Mark told me I’d be in the lead. To be honest, it’s a little overwhelming.” 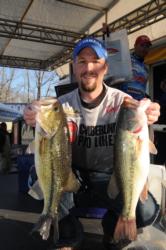 Co-angler Brad Roberts of Nancy, Ky., caught a five-bass limit weighing 16 pounds, 9 ounces to assume second place after Thursday’s competition. Roberts’ limit was the only one of the day among the co-anglers and only the second overall. It also cut the difference between first and second to less than a pound.

“We started in a dirty-water area,” said Roberts, who has a two-day total of 19 pounds, 9 ounces. “He (partner Jason Cordiale) worked one side, and I worked the other. We were fishing a 2-foot drop in about 10 feet of water. The fish were basically moving up the creek, and we were sitting in a staging area, waiting for them.”

Roberts, who weighed all largemouths, used a Cumberland Pro 3/8-ounce casting jig in “oops” color (brown/orange/chartreuse mix). He tipped the jig with a Barren River craw. If Roberts surpasses Melton tomorrow, it would be back-to-back victories. Fishing fans may remember Roberts won the 2009 Forrest Wood Cup on the Three Rivers, fishing behind Michael Iaconelli.

Despite not catching a keeper bass Thursday, Darrell Mitchell of Taneyville, Mo., only fell from second to fourth.

Rounding out the top 10 co-anglers at the FLW Tour event on Table Rock Lake after day two: