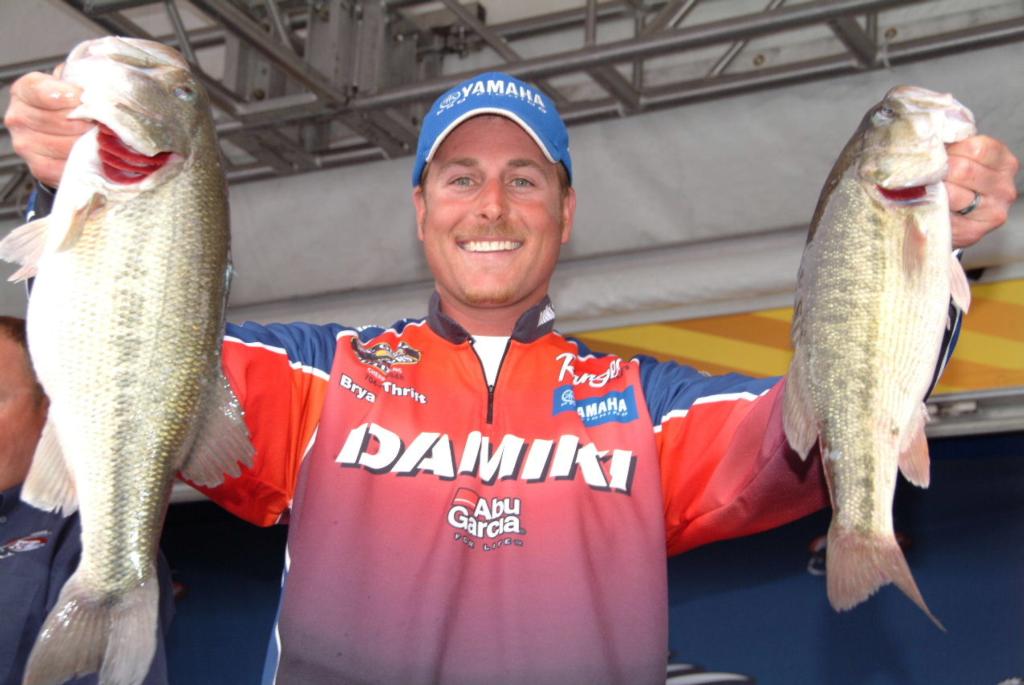 CHARLOTTE, N.C. – While the majority of the FLW Tour field struggled once again to unlock the mystery of Lake Norman’s big-bass bite, Bryan Thrift had no such trouble. Producing the largest stringer of the tournament to date – a whopping 16-pound, 9-ounce bag – Thrift cruised into the overall tournament lead by more than 2 pounds.

Combined with his day-one weight, Thrift now boasts a remarkable 29-pound, 10-ounce total heading into the third day of competition. And to be sure, nobody was more surprised by the outcome than Thrift himself.

“I’m really happy,” said Thrift, who hails from Shelby, N.C. “I figured that a 12 1/2-pound average each day would be enough to win this tournament, so I’m extremely happy to have an almost 15-pound average over two days. If I can keep this up, a 15-pound average is going to be hard to beat. This tournament has definitely more than exceeded my expectations.”

Thrift concedes that he’s fishing a relatively simply pattern. However, it appears that the areas he’s targeting are producing bigger fish than most.

“Basically I’m just running docks all day, fishing jigs and crankbaits in anywhere from 6 inches to 6 feet,” said Thrift, who was in ninth place overall after the first day of competition. “I have a lot of history on this lake, so I’m trying to fish high-percentage places where I’ve caught a lot of my bigger fish in the past.”

As for tomorrow, Thrift says he’s going to rely on the same bait, tackle and presentations. However, he noted that his fishing venues could be subject to change.

“Today I fished a totally different area of the lake than what I fished yesterday,” said Thrift. “So I’m not sure where I’m going to be fishing tomorrow. But when I get there, I’ll be doing the same thing.”

In the end, as far as Thrift is concerned, he couldn’t be more pleased with his performance.

“It was really a lot of fun out there today,” he said. “I got the big bites, and I didn’t lose any fish. That’s all you can ask for.” 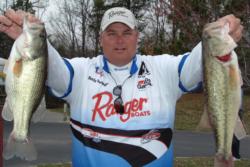 The major shakeup to the day-one leaderboard continued with Rusty Trancygier of Hahira, Ga. Like Thrift, Trancygier moved way up the standings, leapfrogging from 10th place to second place on the strength of a two-day catch of 27 pounds, 9 ounces.

“It feels good,” said Trancygier of his effort in today’s competition. “I had a good practice, and I thought I could catch them. For me, today was relatively easy. I really didn’t have a problem catching them.”

“I’m basically running a couple of pockets,” he said. “I have two areas – my main spot and a secondary area. But the key is finding that warm water. What I’m doing is targeting fish coming in and coming back from the spawn, so I’m catching them both ways.”

Trancygier said another important variable is adapting to the weather and changing conditions.

“I had to change things up today with the clouds and wind,” he said. “Yesterday I threw jigs, worms and a few jerkbaits. But today I was mainly throwing little crankbaits. If we have a little wind or clouds tomorrow, I think I can really catch them again. But I’m definitely going to try to stay in my main area all day tomorrow, no matter what.” 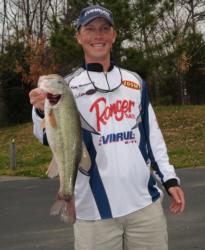 While changes to the leaderboard were numerous, the one constant in the Pro Division seemed to be Andy Montgomery of Blacksburg, S.C. After finishing the first day of competition in third place, Montgomery used a two-day catch of 26 pounds, 6 ounces to hold down his position for the second day in a row.

However, it was far from easy.

“It was pretty tough out there,” said Montgomery. “I wasted about three hours fishing a spot where I hadn’t caught anything all week. I have a lot of history with that area, so it was tough to leave. But I’m not making that mistake again.”

Montgomery said his strategy is to continue to fish for a small limit of spotted bass early and then go flipping for largemouth bass the rest of the day in an attempt to upgrade his limit.

“Yesterday I caught five largemouth, but today I only caught two,” said Montgomery, who is targeting bass primarily with a Shooter Lures jig. “I really need the sun to shine for me big time. I’ve caught most of my weight fishing docks, but if the sun doesn’t shine, I don’t seem to catch as many largemouth bass. And that’s the key.” 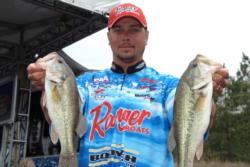 Although day-one leader Jason Christie of Park Hill, Okla., fell to fourth place with a total catch of 26 pounds, he seemed less concerned with his place in the standings than with the future potential of his fishing holes.

“During a tournament you want to have momentum going up, not going down,” said Christie. “But a lot of my dirty-water areas cleared up today, and the fish didn’t bite nearly as well. I was just picking up one here and one there. Right now, I know I can’t catch those big fish in clear water. My bait just doesn’t look the same in clear water. So I’m going to need to figure something out.”

As a result, Christie said there are basically two options at his disposal.

“What I’m really hoping for tomorrow is some wind and rain to dirty up the water a little bit,” said Christie, who is targeting fish with a combination of Booyah jigs, Booyah spinnerbaits and Yum Dinger plastic worms. “But if we don’t get it, I think I’m going to have to start over completely. I have an area way upriver as a backup plan. I haven’t fished it yet, but hopefully I can get some big bites there if I need to.”

Greg Pugh of Cullman, Ala., finished the day in fifth place after recording a total catch of 25 pounds, 5 ounces. 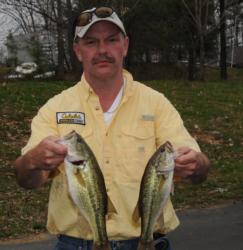 After recording a total catch of 19 pounds, 4 ounces, Mitchell Cook of Drexel, N.C., retained the top spot in the Co-angler Division for a second day in a row. And he couldn’t have been happier.

“It feels wonderful. It feels great,” said Cook. “But I’ve got one more day to go before I can brag about this deal.”

So far, Cook has definitely maintained all the bragging rights. Using a Shooter Lures jig and targeting boat docks in 3 to 8 feet of water, Cook continues to outshine the rest of the field. And with a tournament title on the line in tomorrow’s competition, Cook is well aware that he is only one day away from a career-best finish, a tournament title and a lifetime of memories.

“I’ve drawn a check a couple of times before, but I have never been close to the lead,” said Cook. “I just have to keep this up for one more day. But I’m going to be at the mercy of my pro. All I can do is respect his water and fish hard. Then we’ll see what happens. But I’m definitely excited right now.” 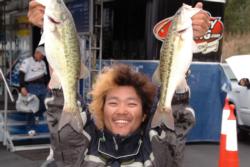 Although Naohiro Maruo of Takamatsu Kagawa, Japan, still struggles a bit with his grasp of the English language, he has demonstrated no such trouble understanding the intricacies of fishing Lake Norman. Bolstered by a two-day catch of 19 pounds, Maruo found himself in second place, a mere 4 ounces out of first.

Not bad for someone who is literally and figuratively in uncharted waters.

Mark Denney of Cottontown, Tenn., finished the day in third place with a total catch of 18 pounds, 10 ounces. However, while Denney was in position to add to his totals, he instead opted to assist his pro partner in a true display of angling etiquette. 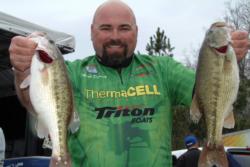 Denney argued that his pro partner needed the fish more than he did and that, in the end, it was an easy decision.

“If I kept on fishing, it probably wouldn’t have helped me a whole lot,” he said. “But my partner really needed some fish.”

Denney said that he targeted a ledge in about 9 feet of water, throwing a Zoom Trick worm.

“I’m feeling good about tomorrow,” said Denney. “I drew Guido Hibdon and I think he’s catching them, so hopefully everything will work out. I feel good, but I’ve been in this position before. I’m just going to go out there and let the chips fall where they may.”

Fourth place belonged to Lynn Baciuska Jr. of Afton, N.Y., who turned in a total catch of 17 pounds, 14 ounces.

Brent G. Evans of Calvert City, Ky., finished the day in fifth place with a two-day total of 17 pounds, 10 ounces.