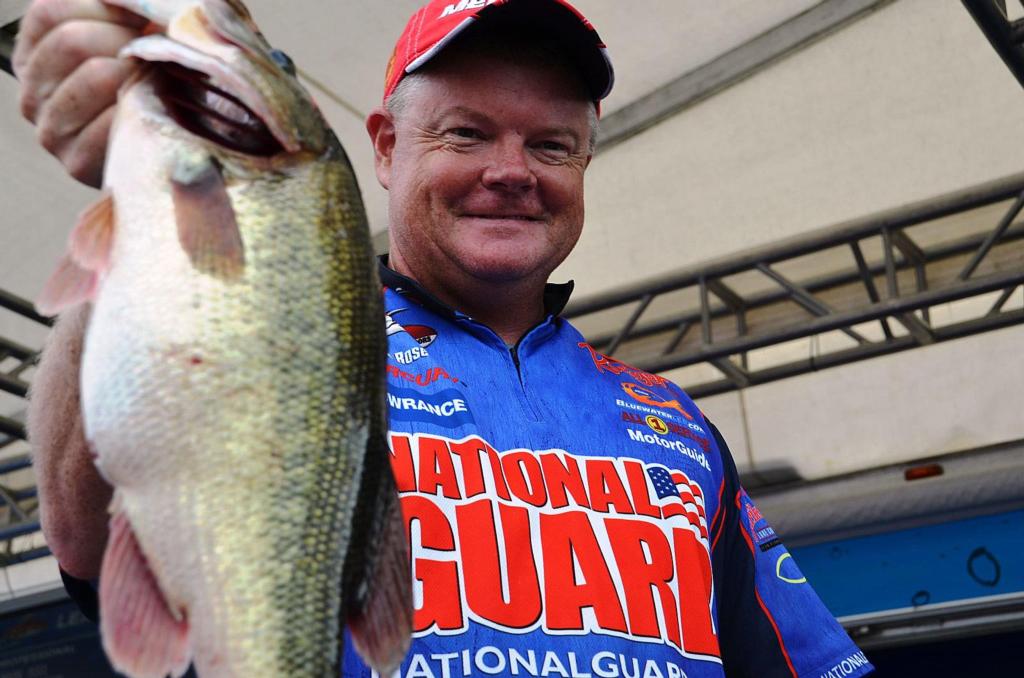 FLORENCE, Ala. – The “ledge master” just keeps on rolling. After holding down a 4-pound advantage over the first two days of competition, Mark Rose of Marion, Ark., said he was getting a little nervous about the precarious nature of his lead and wanted to put a little more distance between himself and the rest of the field. And today he did just that. Using a day-three catch of 18 pounds, 4 ounces, Rose propelled himself to a 7-pound lead over hjs next closest competitor by stringing together a combined three-day weight of 61 pounds.

With only one day remaining in the Pickwick Lake competition, it’s officially Rose’s tournament to lose.

“It feels good,” said Rose, who has dominated the tournament from the start. “Heading into tomorrow’s finals I’d definitely be nervous if we were fishing somewhere like Lake Mead. But being on Pickwick Lake, I really feel comfortable here. I’ve spent so much time here over the years – it’s only two hours from my driveway. I really appreciate this place. It’s got a special place in my heart.”

Rose said that he continued to target bass adhering to ledges in about 17 to 25 feet of water using a Strike King football jig in a green-pumpkin color.

However Rose also said that contrary to popular belief, this tournament has not been easy for him in the slightest – and today was no exception.

“I had about 6 pounds today at around 1 p.m. and I was starting to get a little nervous,” he said. “But then they turned the water on and started to run current. When that happened, I knew where I needed to be.”

When the Tennessee Valley Authority (TVA) decides to run current, the fish become much more active on the Tennessee River chain of lakes as it induces feeding. And that’s exactly what Rose took advantage of. However, Rose knows all too well that the TVA could just as easily decide not to run any current tomorrow – a fact which could ultimately throw the tournament wide open.

“Like I said, it feels good to have a 7-pound lead but who knows what tomorrow will bring,” said Rose, who is amazingly searching for his first-ever FLW Tour victory. “I could come back with 18 pounds tomorrow or I could catch 5 or 6 pounds. You just never know here. It’s great to have the lead but it’s definitely no guarantee.”

On the strength of an 18-pound, 14-ounce catch during the third day of competition, Robbie Dodson of Harrison, Ark., leapfrogged from fifth place to second overall heading into the finals.

But like Rose, Dodson believes tomorrow offers no guarantees.

“I really don’t know if I can catch what I did today in the finals,” said Dodson, who boasts a three-day total of 53 pounds, 14 ounces. “The stars really lined up today for me. But tomorrow I might not even catch a fish.”

Dodson said that most of his worries stem from the increased local boat traffic.

“I had a bunch of locals on my areas today so that made things more difficult,” he said. “And tomorrow it could be the same thing.”

After every tournament day this week, Randall Tharp of Gardendale, Ala., has continued to climb up the leaderboard. After day one, he was in 11th place. After yesterday’s competition he finished in fourth place. And after Saturday’s competition, with one day remaining, Tharp now sits in third place overall with a three-day catch of 53 pounds, 3 ounces.

A self-avowed shallow-water specialist, Tharp continues to demonstrate that he is just as proficient fishing offshore structure. And now, with a title in sight, he’s going to set out and try to prove it once again tomorrow.

“There are a lot of big fish where I’m fishing,” said Tharp. “They’re out there. It’s definitely shaping up to be a real shootout. I can’t wait for tomorrow.”

Although Tharp was convinced earlier in the week that Rose would walk away with the title and that everyone else was competing for second place, now he’s not so sure.

“You can’t win a tournament until day four and I really now think that I have a realistic chance to win,” he said. “There a 25-pouind bag out there where I’m fishing and that’s exactly what it’s going to take tomorrow. I can definitely do it. It’s not going to be easy but I now think it’s a realistic possibility. I’ve expanded my area a little bit more each day so I’m really excited to go out there and go fishing again.”

Tharp said that he’s been targeting bass on a creek channel with a combination of jigs, swimbaits and Carolina rigs.

Kenneth “Boo” Woods of Hazard, Ky., finished the day in fourth place with a total catch of 52 pounds, 5 ounces.

However, the big story of the day was the giant move made by Shad Schenck of Waynetown, Ind. Heading into today’s event, Schenck was in 19th place and just hoping to eek into the top 10 and survive Saturday’s cut. However, Schenck did much more than that, recording the biggest sack of the tournament to date – a 21-pound, 2-ounce bag. That result propelled Schenck all the way into fifth place heading into the finals.

“We had over 40 pounds in the boat,” said a clearly ecstatic Schenck, who now boats a three-day total of 52 pounds, 4 ounces. “And I think I can do it again.”

Rounding out the top-10 pro finalists on Pickwick Lake:

Although David Dudley of Lynchburg, Va., and Brent Ehrler had been battling it all week for the coveted 2011 FLW Tour Angler of the Year title, two important things happened today that pretty much decided the outcome. For starters, while Ehrler was out on the water today he got a call that he wife was rushing to the hospital in preparation for the birth of the couple’s first child. As a result, tournament officials allowed Ehrler to weigh-in early and let the chips fall where they may. Ehrler ultimately made the cut but wisely elected to forego his final day of fishing to jump into a plane and head home tonight – guaranteeing that he wouldn’t finish in the top four and basically conceding the AOY title to Dudley.

But as it turned out, Ehrler’s decision didn’t ultimately affect the outcome as Dudley turned in an 11th-place finish which was good enough to secure the title outright. FLW Outdoors officials said that Dudley will be formally presented with the AOY trophy during Sunday’s weigh-in.

The final day of FLW Tour action on the Pickwick Lake commences during Sunday’s takeoff, scheduled to take place at 6 a.m. at McFarland Park, located at 200 James M. Spain Drive in Florence, Ala.