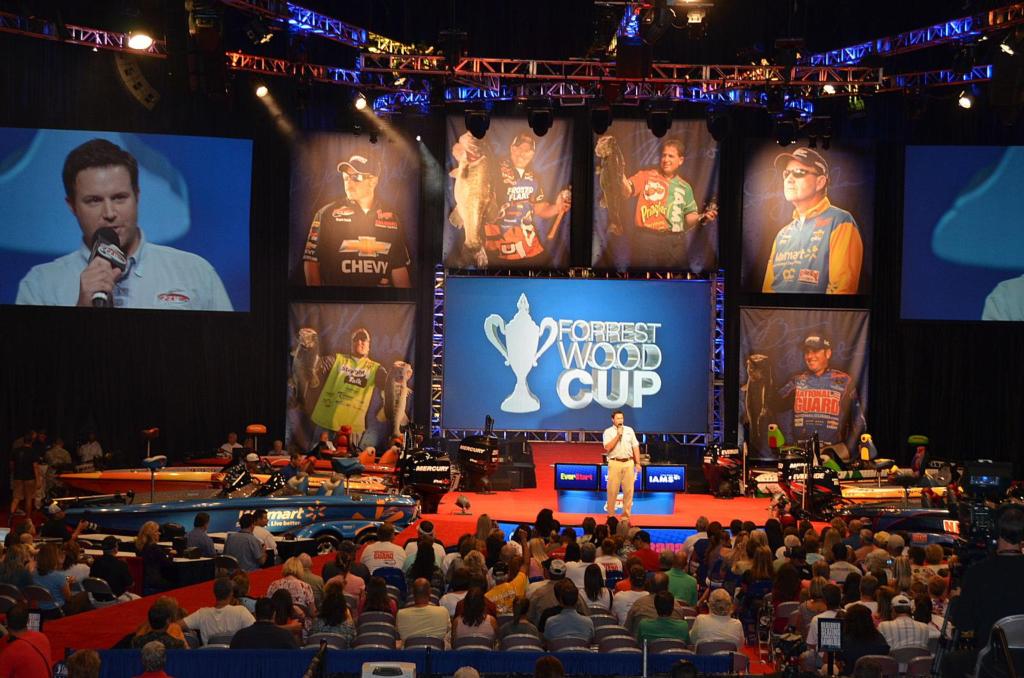 Day-one weigh-in at the Forrest Wood Cup is about to commence. Photo by Gary Mortenson.
Martin takes control, the weather takes its toll, and a father and son find success both on and off the water
August 11, 2011 • Gary Mortenson • Tackle Warehouse Pro Circuit 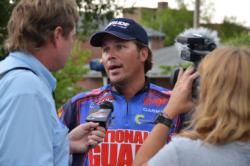 Martin takes control … So far at least, the 2011 Forrest Wood Cup competition has turned out to be a competition between the haves and have nots. With the day’s inclement weather throwing a monkey wrench into a good number of championship game plans, only five anglers managed to secure five-fish limits greater than 15 pounds. Randall Tharp (fifth) produced a 16-pound sack; Jay Yelas (fourth) countered with a 17-pound, 5-ounce stringer; Brandon Coulter (third) managed an 18-pound limit; and Jason Christie parlayed a five-fish catch into an 18-pound, 1-ounce stringer. But the day’s big winner was none other than Scott Martin, who boated a monstrous sack weighing in at 19 pounds, 2 ounces to grab the overall lead. “I was fishing the main lake in about 10 to 20 feet of water,” said Martin, who has won nearly $1.25 million in his career fishing with FLW Outdoors. “I basically had one main area where I caught all of my fish. I really feel good about it because there are some big fish in that area. I’m just hoping my spot will hold up.” Martin, the son of bass-fishing icon Roland Martin, already boasts a runner-up Cup finish in 2004. But now he says he’s determined to do everything he can to finally seal the deal and walk away with his first-ever championship title. “I really want to win this badly,” he said. “The first quarter is over and I’m happy where I’m at. But we still have three more quarters to go.” 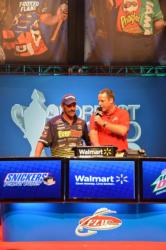 Father and son find success … Veteran pro Ron Shuffield and his son Spencer comprise the only father-son duo to qualify for this year’s Forrest Wood Cup. However, make no mistake about it: Ron and Spencer aren’t simply happy to be here – they’re here to win. Spencer is currently leading the entire Co-angler Division with a total catch of 14 pounds, 8 ounces while Dad is battling to make a move from the middle (28th place) of the pro pack. “I’m so blessed that I can sit here today with my son and compete,” said the elder Shuffield. “Right now he’s in first place, and I couldn’t be more proud of him.” Dad certainly has a lot to be proud of these days. Just a few weeks ago, Ron was able to watch his son capture an improbable, come-from-behind 2011 FLW Tour Co-angler of the Year title at Pickwick Lake. “I’ve been taking my son fishing basically his whole life,” said Ron. “And I couldn’t be happier with what he’s accomplished.”

Weather takes it toll … In the scorching days leading up to the start of the 2011 Forrest Wood Cup, anglers had pretty much established their fishing patterns based on sunny skies, hot and muggy temps, and little to no wind. Well, when it comes to tournament fishing, one thing should be clear by now – never count on anything staying the same for too long. “I was kind of joking about it in practice,” said Kellogg’s pro Dave Lefebre. “It’s been 100 degrees and sunny every day I’ve been here so far, and wouldn’t you know it? The first day of the tournament it rains. I was laughing that only a change in weather could screw me up. It figures.” As a result, Lefebre now sits in 34th place. However, Lefebre wasn’t the only angler significantly affected by today’s weather changes. Countless anglers walked across the stage today bemoaning the shift in weather and their luck. “Today was completely different,” said Hot Spring native Rob Kilby. “It’s been like 120 degrees for a month. And guess what? It rained on us all day today.” Although Kilby had hoped to bring in some more weight, at least he managed a 15th-place showing. But clearly, many other pros weren’t so lucky. 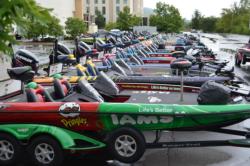 3: Number of Hults brothers who qualified for this year’s Forrest Wood Cup championship in the Co-angler Division – Chris, Alan and Matt.

4: Number of anglers who have a shot at becoming the first pro to win two Forrest Wood Cup titles at this year’s event – Brent Ehrler, Luke Clausen, David Dudley and Darrel Robertson.

40: Total number of acres, in thousands, that comprise Lake Ouachita.

58: Total number of anglers comprising each of the pro and co-angler fields in this year’s championship.

60: First-place prize money, in thousands, awaiting the winner of the Co-angler Division during this week’s event.

143: Total number of fish caught by co-anglers during the first day of Cup competition.

244: Total number of fish caught by the pros during the first day of Cup competition.

313-3: Total weight, in pounds and ounces, caught by co-anglers during the opening day of Forrest Wood Cup competition.

588-9: Total weight, in pounds and ounces, caught by the pros during the opening day of Forrest Wood Cup competition.

600: First-place prize money, in thousands, awaiting the winner of the Pro Division during this year’s Forrest Wood Cup. 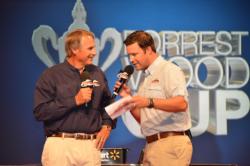 “It was tough out there. You can easily go two hours without even one bite. The fish are really finicky out there right now.” – Current co-angler leader Spencer Shuffield.

“It seemed like the more I practiced, the dumber I got.” – 1999 Forrest Wood Cup champion Darrel Robertson joking about his difficulties so far during the 2011 Cup.

“Today was a train wreck. I lost six of my first seven big bites I had today. So I’m really going to need to capitalize on every bite going forward.” – Randall Tharp on his tough day of fishing despite the fact that he finished the day in an enviable fifth place overall in the Pro Division.

“After winning (the 2011 FLW Tour) Rookie of the Year, I’m liable to give it back if this is how the tournament is going to go.” – FLW Tour pro Shawn Murphy joking about not catching a fish during the first day of Cup competition on Lake Ouachita.

“I don’t like fishing clear water when it’s 92 degrees. But that’s what you’re going to have to do this week. You can do the right thing for two hours and not get a bite – the fishing is just that slow.” – 2011 Cup contender Jay Yelas on the finicky bass bite that can be expected this week on Lake Ouachita.

“I couldn’t decided whether to fish deep or shallow. I was like a chicken with his head cut off out there today.” – Pro contender Cody Bird.

“So many people dream about walking across this stage. And today, I’m doing it.” – Pro Mike Reynolds on the satisfaction of qualifying for this year’s Cup. 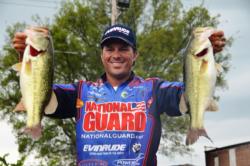 “It was a blessing out there today. I had three good days of practice, and I picked up right where I left off.” – Day-one pro leader Scott Martin.

“If you guys had a `trash-fishing’ tournament, I would have been on top of it today.” – Pro contender Chris Zaldain joking about his ability to catch nearly every species of fish except bass during today’s competition.

“I don’t think I did.” – Pro competitor Brandon Coulter responding to Hank Parker’s question of how he managed to maintain his composure after losing five fish during the early morning hours of the tournament.

“I’m sure even today’s fishing beats law school.” – Pro competitor Jake Gipson, winner of the 2010 and 2011 FLW College Fishing National Championships, joking about not catching a single a bass during the first day of Cup competition. Gipson starts his first day of law school on Monday.