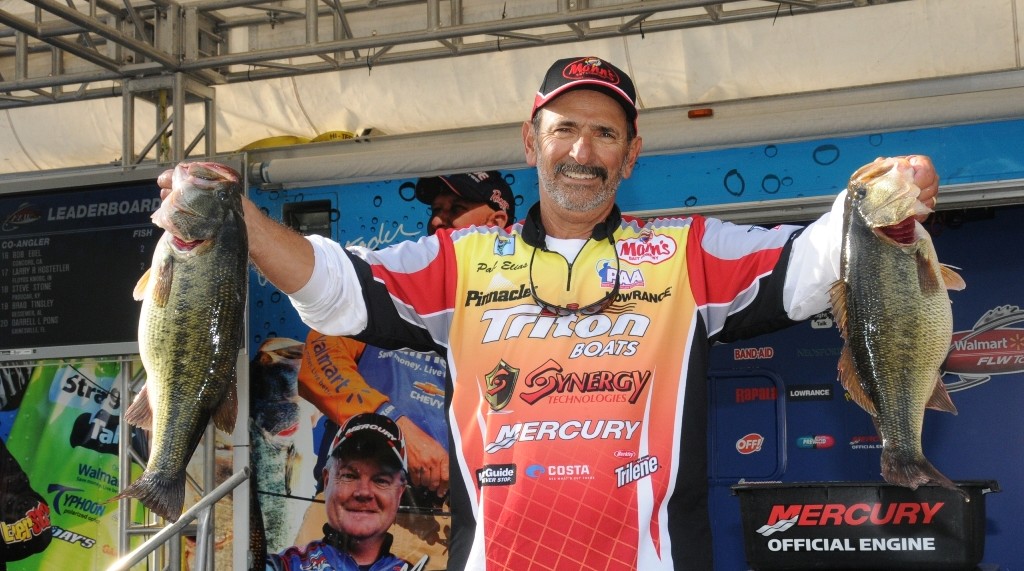 GUNTERSVILLE, Ala. – With a few weights in the 20s, the top of the leaderboard may look normal, but there is nothing normal about the way Lake Guntersville is currently fishing. Long considered one of the best bass lakes in the country, Guntersville proved stingy on day of one of the final Walmart FLW Tour Open of 2011.

With a top-heavy leaderboard, it’s clear G-ville still holds the quality bass. It’s just that most of the pros haven’t figured out how to make them bite. Consider that in 2009 there were 15 stringers in excess of 20 pounds weighed on the tournament’s first day. And last year, 24 stringers over 20 pounds made it to the day-one scale. Today that number was precisely two.

Fall is always tougher as the fish scatter and roam with bait. Sometimes a steady wind can help position the bait, which in turn helps position the bass.

Day-one leader Paul Elias capitalized on that wind to catch a 26-pound stringer. Elias’ boat broke down this morning, and he wasn’t able to start fishing until almost 9 a.m. From there, his day completely turned around.

“I was real worried for a while – on pins and needles,” said the veteran pro from Laurel, Miss. “Once I got out there I was pretty confident I was going to catch them, and then everything started going right and the Lord blessed me and made up for the bad morning, I guess.”

Elias said he experienced a fairly productive practice and that he figured he’d be happy with 13 to 15 pounds per day. His biggest two bass in three days were a 5-pounder and 4-pounder.

“I never repeated any water during practice, so I really didn’t know what I was on. I definitely thought I’d catch some because I had a pattern going, but I never expected to catch that.”

Elias said he caught a lot of keepers, and he continued to cull even if he was only gaining ounces at a time.

“I may have hurt myself in the long run, but I really think today was a big-fish day, so I tried to take advantage of it. In my mind, if the wind dies down tomorrow like it’s supposed to, the fish won’t be there.”

The day-one leader was unwilling to divulge pattern details, but said the wind created current in his best area. In terms of presentation, Elias reported that fishing slower led to most of his bigger bites. Overall, he said he has seven or eight places, and he only sampled three of them today.

“I had no one around me at all today, and that was great. I just love this lake. I’ve never won a tournament here, but I’ve come close a lot of times. Everybody knows how I like to fish, and when I can catch them that way, I can usually catch them pretty good. If I don’t run out of fish, I’ll feel really good.

“I’m on a good, strong pattern, and I don’t think anybody is fishing the way I’m fishing. But a crowd could ruin all of that.” 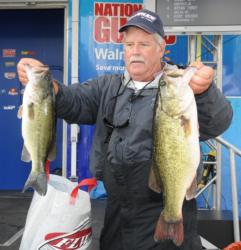 Marshall Deakins came into the final Open of the year as a sleeper pick for many Fantasy Fishing players. And the Dunlap, Tenn., pro didn’t disappoint on day one, catching 21 pounds, 3 ounces for second place.

“I went to my first place this morning, and it didn’t work out,” Deakins said. “Then I switched up and caught three good ones pretty quick. Then I caught two more over the next couple hours, and then it picked up again at the end of the day.”

In total, Deakins estimates he caught 12 to 15 keepers. He’s pleased with his performance and thinks the cold front must have turned the bite on.

“I thought maybe I could catch 10 pounds today if I was lucky. They just bit today for some reason. I caught some on a frog, but most came from scattered grass.”

Deakins took ninth at the recent BFL Super Tournament and has three BFL wins on Guntersville to his name. 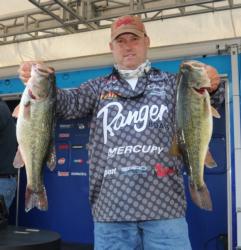 Hoover, Ala., fisherman Bob Behrle sits in third place after caching a five-bass limit worth 19 pounds, 2 ounces. Behrle has experienced a rough 2011 tournament season, but his luck is slowly but surely turning around.

“On the last day of practice on my last cast, I caught an 8-pounder,” he recalled. “And that fish told me to stay out deep on this one stretch. And yesterday was my 51st birthday, and today I caught them pretty good.”

Anchoring his day-one limit was a pair of stout 5-pounders. Behrle caught a few keepers off a shallow, windy bank, but mostly stayed out deep, which is surprising, taking into account the season and that Behrle considers himself a shallow-water fisherman.

“It just wasn’t happening shallow for me. So I just went looking for some ledges and I found this one good stretch. I really hope it replenishes.”

Clent Davis, the co-angler champion at Pickwick Lake, sits in fourth place in the Pro Division with five 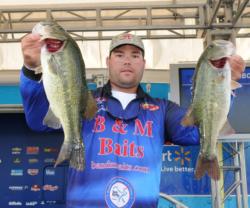 bass worth 18 pounds, 6 ounces. The 25-year-old also took second at the EverStart Series event on Lake Guntersville back in February.

“Believe it or not, I haven’t been back to the lake since February,” said the Montevallo, Ala., native. “But that tournament told me I could at least fish with these guys.”

Davis said Guntersville is fishing quite a bit different now than it was during the winter.

“The fish are just so scattered right now. Today was extremely tough. It was a grind like I knew it was going to be. I just got the right bites.”

Two of Davis’ bigger fish came flipping, but he doesn’t have enough confidence to do it all day.

“I could easily come in with one or two fish. I just don’t have the faith to stick with it. But that’s how I love to fish. Today I put nine rods on the deck and caught a bass on every one of them.”

After weigh-in, Davis was busy driving back to his hometown to borrow a boat from a friend as he experienced engine problems and had to come in an hour early. 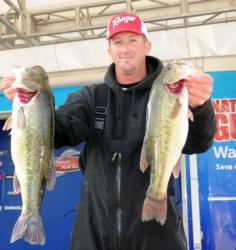 A few months ago, Bryan Schmitt was simply known as a Potomac River ace. But after taking eighth at the FLW Tour event on Lake Champlain and catching 17 pounds, 7 ounces of Guntersville bass today, Schmitt is gaining national attention.

“I tell you what, it’s all working out right now,” said an elated Schmitt. “I’ve never been to this lake before, but I guess grass is grass.”

“In practice I was catching them on an Original Z-Man ChatterBait. So I started with that today, but then I noticed the water had dropped 9 degrees. So then I started flipping, and 10 minutes later I caught that 6-12. That told me the fish had moved in tighter and didn’t want to chase a bait.”

“I was really blessed with that big bite. I really don’t know if I can do it again tomorrow.”

Rounding out the top 10 pros in the Walmart FLW Tour Open on Lake Guntersville after day one: 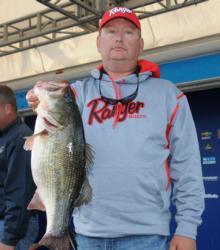 Horton fished with Troy Morrow on day one, and the two stayed away from the grass.

“It seemed like they bit a lot better today than they did in practice,” said Horton, who finished second this year on Beaver Lake and third at Chickamauga. “I really have to thank Troy; he gave me the opportunity to fill out my limit before he left his area.”

Tomorrow Horton is paired with Guntersville guide Chris Lane, who almost certainly will be fishing the grass.

Thomas Rizzo of Rochester, Pa., boated a 13-pound, 1-ounce limit out of the back of Schmitt’s boat for third place.

Ben Due of Mauston, Wis., is in fourth place with a 13-pound limit.

Ty “The Hustler” Hester of Russellville, Ala., rounds out the top five co-anglers with 12 pounds, 7 ounces.

Rounding out the top 10 co-anglers in the Walmart FLW Tour Open on Lake Guntersville after day one: