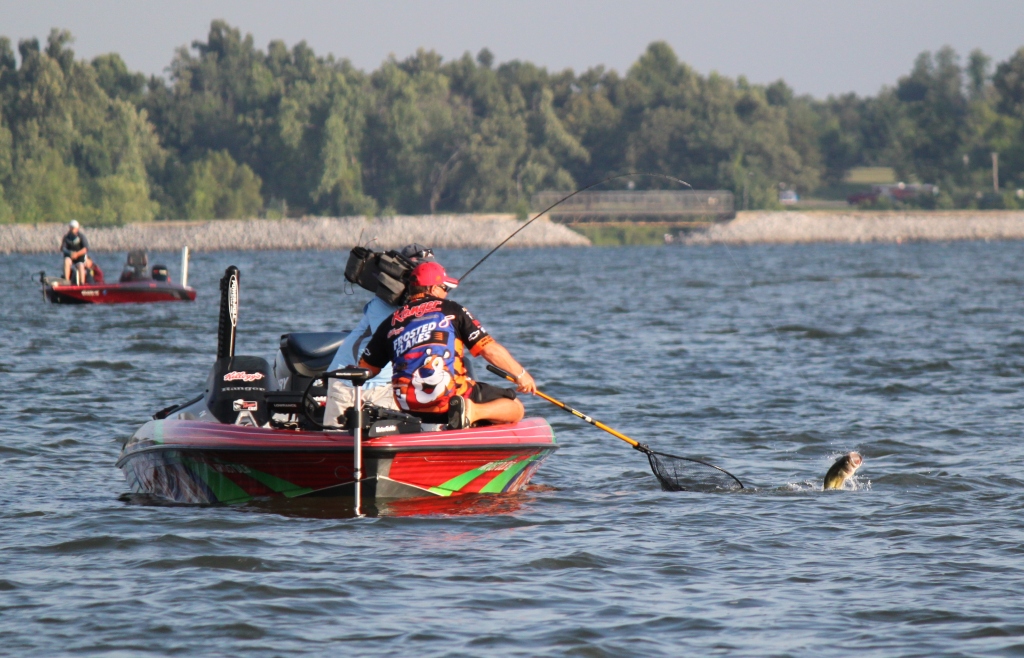 MURRAY, Ky. – Dave Lefebre left them biting on Kentucky Lake on day three, and they did not let him down today, as the Kellogg’s pro once again hauled in the day’s heaviest stringer to claim the Walmart FLW Tour victory with 6 1/2 pounds to spare.

Lefebre’s journey to the top was a rather long one, as he seemed out of contention after day one, having caught a fair-to-middling 14 pounds, 15 ounces that had him all the way back in 40th. Lefebre, though, should never be counted out, especially when he’s found a spot that he knew all along had the winning fish. He bounced back on day two with 19 pounds before really strutting his stuff yesterday with the heaviest stringer of the tournament – a limit weighing a whopping 23 pounds, 15 ounces.

That moved him all the way up to second, only 2 ounces behind the day-three leader, Snickers pro Chris Baumgardner of Gastonia, N.C. Wind and cloud cover frustrated Baumgardner’s efforts today, while Lefebre’s spot proved its mettle by yielding yet another limit, this one worth 19 pounds, 5 ounces, the day’s heaviest weight. That put Lefebre on top with a four-day total of 77 pounds, 3 ounces that earned the Erie, Pa., native $125,000. 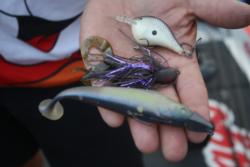 Lefebre could have been undone today with mechanical issues that forced him to switch boats, losing lots of precious fishing time in the process. He also lost two fish that he estimated at 4 1/2 pounds each, both of which he had in the net before they jumped.

“To start the day like that and end up where I am is a blessing from God, and I give Him all the glory,” Lefebre said. “I lost my temper a couple of times. I knew if I could get my head together, I could win this.”

Lefebre’s victory, then, feels a little bit like destiny, and it’s a journey that began on the second day of practice, when he found a shell bed full of bass that were eating up his Rapala DT 10 and DT 6 crankbaits.

“I had a strong day my first day of practice, and I had the luxury of saying I was ready for the tournament, even though I really wasn’t,” he said. “So I went out and looked for stupid stuff. Just when I was ready to give up, I got a big bite that made me keep going.”

Though Lefebre found the shell bed with crankbaits, it was a Storm swimbait that brought in kicker fish after kicker fish once the tournament began.

“I threw it every day on that spot,” he said. “Today I threw a hodgepodge of swimbaits – I brought my whole box of swimbaits to Kentucky Lake like I always do. But today was the first day I’ve shown that spot anything but the Storm.”

Big risks paid off for Lefebre 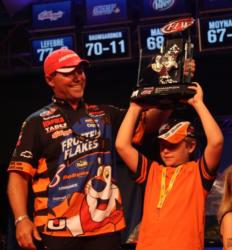 On day three, Lefebre said he left big fish biting on his spot in an effort to manage his fish. That can be risky, as sometimes anglers leave them biting in order to save them for later, only to return the next day and find them gone. For Lefebre, it paid off.

“I fish to win every day, and it’s hard to do that when you need four days together to win,” he said. “I tried to manage the fish and leave them biting to save them for another day. It didn’t have to work out this way, but it did.”

While the story of the week seemed to be relying on electronics to catch bass deep on the ledges, Lefebre’s shell bed was in about 5 to 6 feet of water.

“Early in the day, they were biting,” he said. “Late in the day, I had to throw at a certain angle on that shell bed. Today when the wind laid down, I got back to that spot and caught that big one.”

When day three ended and it looked like it would be a showdown between Lefebre and Baumgardner, both of them were hunting for the same thing – a second FLW Tour victory. Lefebre’s first Tour win came in 2004 on Old Hickory Lake, while Baumgardner won in 2007 on the Potomac River.

“I fish with a lot of my very close friends, and it was Chris’s turn,” Lefebre said on stage. “I went out of turn.”

Clouds roll in on Baumgardner 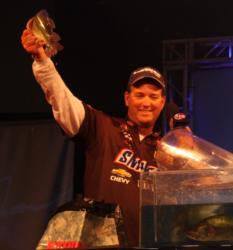 Baumgardner ended day three on top using a strategy he said was no big deal, and it wasn’t – he was fishing docks on Lake Barkley throwing a chatterbait with a Zoom Super Fluke in glimmer blue. But it was a simple strategy that took him far even if he fell short of claiming the win. Baumgardner’s four-day haul totaled 70 pounds, 11 ounces and earned him $33,287.

He began the tournament in 30th place with 15-9 but changed his fortunes on day two with a limit weighing 19 pounds, 8 ounces. He threw the hammer down on day three, bringing in 22-15 and becoming the man to beat on the final day.

But Sunday exchanged Saturday’s abundant sunshine for clouds and scattered showers, and Baumgardner’s bite suffered. He wound up weighing in a 12-pound, 11-ounce limit, more than 10 pounds less than he weighed in the day before.

“I just didn’t get the big bites,” he said. “It was cloudy, and the fish don’t get around docks as good – they go out in the middle. There was nothing to pull them up to the docks.”

Baumgardner tried to adjust but never keyed in on any technique or spot that would yield the big bites.

“I’m glad he caught 19,” Baumgardner said of Lefebre’s day-four catch. “If he’d caught 15 and beat me by a little it would have been worse. I’ll take second.”

Mabrey moves up to third 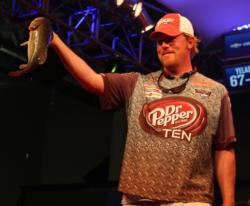 Kyle Mabrey and Jim Moynagh switched spots on the leaderboard today, as yesterday’s No. 4 Mabrey moved up to third while Moynagh dropped to fourth. Mabrey had a solid day on Kentucky Lake today, bringing in a 17-pound, 10-ounce limit that boosted his total weight to 68 pounds, 4 ounces, worth $28,520.

“I was looking for areas where fish had recently spawned and were making their way back to the main lake,” Mabrey said of his tournament strategy. “They were still in that shallow mode, which is not typical on Kentucky Lake this time of year.”

Mabrey found a gravel bar that was about 12 feet deep that had a little ditch running through it about 14 feet deep. That fell off into a creek channel 24 feet down that ended on a big flat.

“It was jam-packed with baitfish,” Mabrey said. “I was catching fish averaging 3 pounds. Often I’d see an enormous tail in their mouth, so I started fishing bigger baits.”

“I was bummed out – I thought it was going to be a giant,” he said. 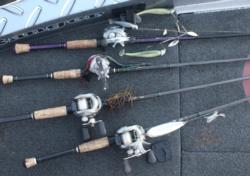 In addition to the 6-inch swimbaits on the Yellow Hammer, Mabrey said he also caught fish on a Zoom Magnum Ol’ Monster worm. In today’s cloudy weather, he switched to a swimbait with blades, which he thinks helped the fish to see his bait.

“It totally seemed to get the bigger fish to bite,” he said. “When it’s harder to see, you’ve got to give them a little more flash.”

Mabrey credits not only the baits but also the rest of his equipment, including a 775 Powell Endurance Rod that he rigged up with 65-pound braided line.

“It’s a great rod for throwing those heavy rigs,” he said.

Moynagh, Yelas round out top five 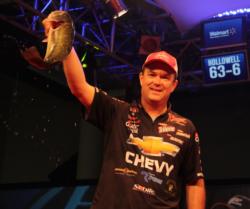 Finishing in the fourth spot is M&Ms pro Jim Moynagh of Carver, Minn., with a four-day catch of 67 pounds, 2 ounces that earned him $23,753. The finish put him just one point behind David Dudley in the Angler of the Year race.

“I had one spot that produced quality fish, and on day two it really panned out,” Moynagh said. “It was a one-spot wonder tournament for me.”

Chevy pro Jay Yelas of Corvallis, Ore., ended the tournament in fifth with a combined weight of 67 pounds, good for $18,987. He too was among the pro leaders bucking conventional wisdom and fishing shallow, and he caught his bass on Lake Barkley.

“I just like to fish shallow,” he said. “You can do whatever you want to catch them here. The deepest I caught them all week was probably 4 feet deep.”

Rounding out the top 10 pro finalists: