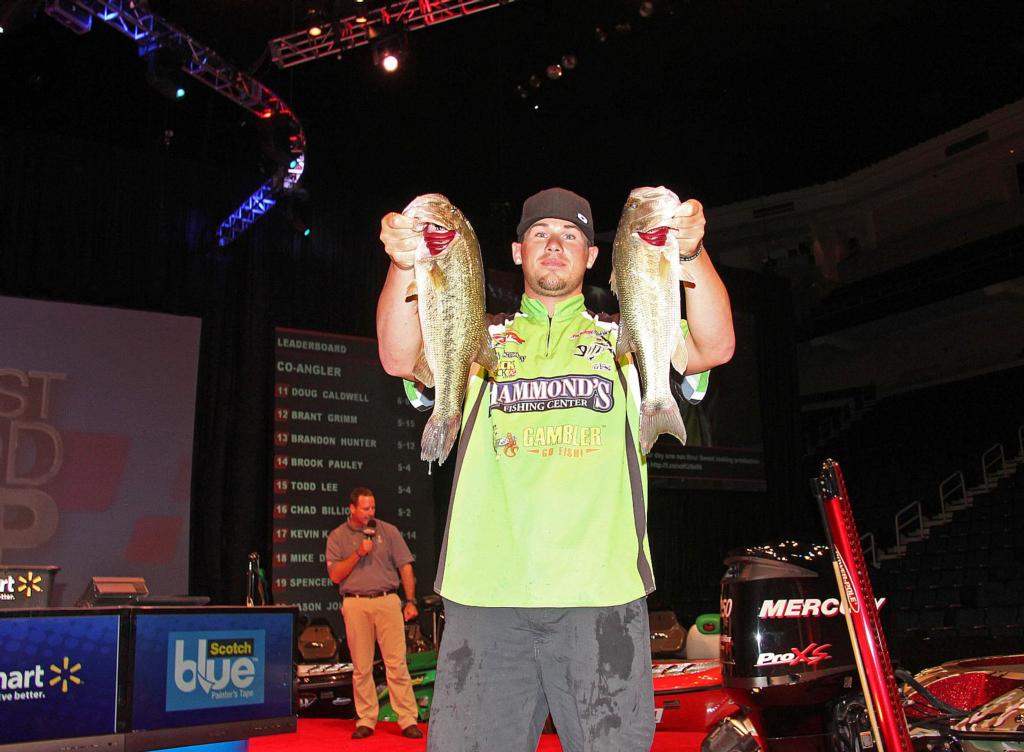 GAINESVILLE, Ga. – Showing the stuff that earned him the FLW Tour Co-Angler of the Year title, Nick Hensley pulled ahead of the field to lead day one of the Forrest Wood Cup on Lake Lanier.

Six weeks after clinching his title with a second-place finish in the FLW Tour Major event on Lake Champlain, the Cummings, Ga. competitor caught a 5-bass limit that weighed 12 pounds, 2 ounces and put him atop the co-angler field. Not that he needed any stimulus, but fishing with past Forrest 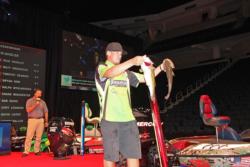 This pairing also presented Hensley with a good opportunity. Admittedly disinterested in Lanier’s well-known deepwater dropshotting routine, Hibdon did what he does best – target largemouths around shoreline structure. Today, he lead his partner on a tour of the docks that have retained sufficient depth on a lake down some 6 to 8 feet since the Cup’s 2010 visit. Hensley wisely converted this opportunity with prudent tackle selection.

“I fished shallow all day,” Hensley said. “Dion was pitching at brush and under docks with a Brush 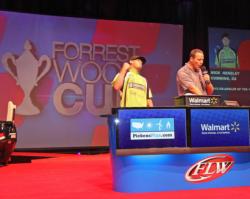 Hog and I just kept skipping a jig under docks right there beside him. It was a different presentation and I was able to get the bites that he wasn’t getting.”

Hensley threw a 3/8-ounce jig with a 4-inch Yamamoto Twin Tail trailer. Reaching at least 4 feet under the dock was the key to tempting his fish.

“I had to get the jig a pretty good ways in there,” Hensley said. “The edge isn’t going to cut it.”

The way a day finishes is what counts on the leaderboard, but Hensley said the way his began had him concerned. “At 11 o’clock I didn’t have any fish and then about 11:30, I caught a good one that went about 2 ¾ pounds. Every 30 minutes after that I was getting bit so it worked out well.”

He had the quality, but it was the quantity part that left Matt Krekovich in second place. The Granite City 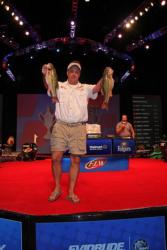 , Ill. co-angler sits just 9 ounces off the lead with a weight of 11-9, but his missed his limit by one fish. One more legal fish and the leaderboard has a different look.

“I had one good fish around 3 pounds early and I thought I was going to really have a pretty steady day from there on,” Krekovich said. “Fishing behind (a pro) is very difficult and I was fighting through it all day. My last three fish were in the last hour of the day and I was fortunate to have them.”

Krekovich was drop-shotting with Roboworms all day. He used 6- and 8-pound Seaguar fluorocarbon and caught all of his fish off brush piles in 30-35 feet.

“It was a very light bite – they’re not aggressive in the least,” Krekovich said. “With just the slightest little tick, you come up on them and really play them. A 2 1/2-pound fish with light line – these (spotted bass) are strong fish.”

Dearing drops down for third 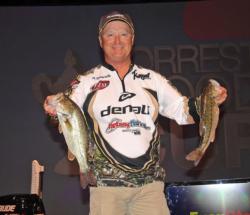 Timothy Dearing, of Loudon, Tenn. gave diversity its chance today, but ultimately, the tried-and-true predictable Lanier tactic of dropshotting is what did the trick for him. Sacking up a limit catch of 9-6, Dearing took third place on day one.

“I tried several different things – some topwater, Fish Head Spins – but nothing else seemed to work,” he said. “I had five by noon. I caught little fish all day long, but I caught just those five keepers.”

Dearing caught his fish over brush piles and standing timber. His bites were coming in 20-30 feet. Dearing baited his dropshot with Roboworms of three undisclosed colors. Also under wraps is a particular bait modification that Dearing notes as key to his success.

“The color depended on whether it was sunny or cloudy,” he said. “It got sunny for a little bit today and when it got cloudy I had to change to another color. I’m doing something special to the worms that I can’t say right now. I’m doing something that’s making the fish key on that worm.”

Bryan New, of Belmont, N.C. came up one fish short of his limit, but four that weighed 9-1 were 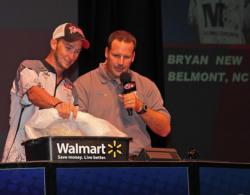 enough for a fourth-place finish on day one. New nabbed a good fish early on a pearl Zoom Fluke, Texas rigged with a few wraps of lead wire on the hook for extra casting distance.

New tried a Fish Head Spin later in the morning, but he found that the fish were just nipping at the bait without committing. He caught the remainder of his fish on a drop-shot with an unidentified color.

“I didn’t catch many on the dropshot,” New said. “I only had three keepers, but they were all good keepers. I had one almost 4 pounds.” 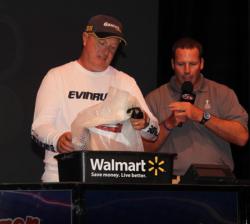 Ralph Myhlhousen, of Council Bluffs, Iowa and Shane Winchester, of Glasgow, Ky. share the fifth-place spot with equal weights of 8-12. Myhlhousen had several shots at schooling fish today and caught a few on a Super Spook Junior. When the schooling activity subsided, he caught fish on a chrome/chartreuse spoon.

Winchester caught one of his fish on a pearl Big Hammer swimbait and the rest on a ¼-ounce shaky head with a morning dawn Roboworm.

“We were fishing shallow, so I was just trying to get (the bait) as close as possible to what little cover there is,” he said.

Rounding out the top-10 co-angler leaders at the Forrest Wood Cup were: 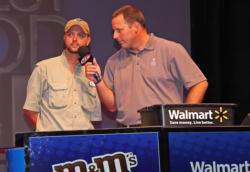