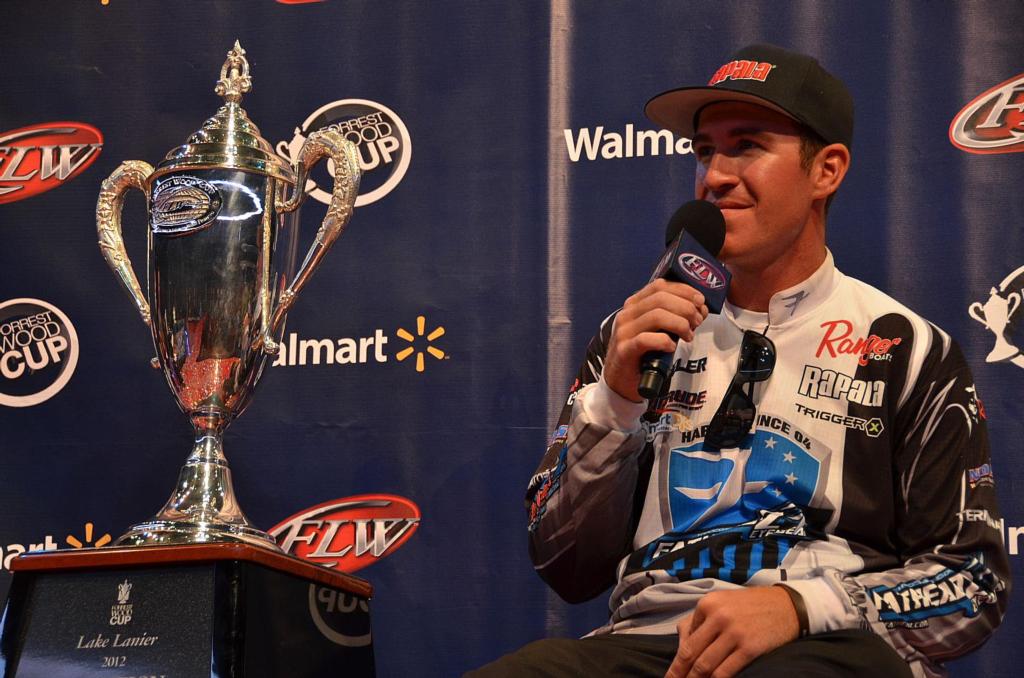 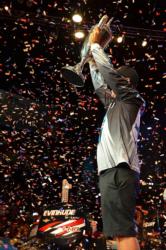 Wire-to-wire Wheeler … In the end, the 21-year-old upstart from Indianapolis, Ind., was just too much for the rest of the field. Bolstered by an 11-pound, 15-ounce catch on the final day of competition, FLW Tour rookie Jacob Wheeler blew away four former Forrest Wood Cup champions, three FLW Tour Angler of the Year title holders as well as the rest of the top-10 field to claim the most prestigious title in bass fishing. With a total four-day catch 60 pounds, 1 ounce under his belt, Wheeler not only took home the title and the $500,000 first-place prize but also became the youngest angler in the history of FLW competition to be crowned Forrest Wood Cup champion. And in the end, it wasn’t even close as Wheeler extended his nearly 6-pound lead on day three to 7 pounds, 5 ounces when all was said and done. In short, Wheeler’s accomplishment was simply amazing by any measure. “I’m beyond speechless right now,” said Wheeler, who gained the top spot on the leaderboard on day one with an eye-popping sack weighing in just shy of 22 pounds. After that, the young rookie never once looked back, maintaining his vice-like grip on first place all four days of tournament action. “That first day was the best day of fishing in my life. But this whole event, I really tried to not even think about the Cup. I just kept my head down and kept fishing.” However, while Wheeler walked away with the title by a very comfortable margin, he acknowledged that the final day of competition was far from easy. “It was a struggle for me 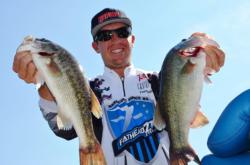 today,” he said. “I only had six keeper bites all day. But I really have to thank (sixth-place finalist) Jay Yelas. We’re both sharing the same water all week but today he let me have it all to myself. So I really have to thank him for that.” Anyone looking for easy answers as to Wheeler’s magical formula for unlocking the mysteries of Lake Lanier this week would undoubtedly be disappointed. Wheeler threw at least eight different baits (including prop baits, vibrating baits topwaters as well as a variety of flipping techniques), targeted the river and the main lake and found success on current breaks as well with patterns targeting a variety of different cover and baitfish. “Basically, I was junk fishing all week and just fishing the conditions,” he said. “And in the end, it was meant to be.” When a 21-year-old rookie wins the Forrest Wood Cup title wire to wire, who’s to argue with that? 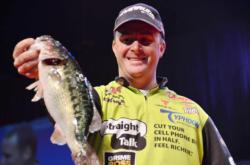 Canterbury comes up short … Despite fishing an outstanding tournament, Straight Talk team pro Scott Canterbury of Springville, Ala., didn’t quite have enough in the tank, literally and figuratively, to catch Jacob Wheeler. As such, Canterbury had to settle for second place overall with a total catch of 52 pounds, 12 ounces. “I fished flawlessly all week until today,” said Canterbury. “I thought going into yesterday that if I could bring back 16, 17 or 18 pounds, I would have had a real chance. But it just didn’t work out. I knew coming back today that I really didn’t have an opportunity to catch Jacob with what I had.” Although Canterbury only managed a 10-pound, 7-ounce stringer in today’s competition, he said that overall, his experience at the 2012 Forrest Wood Cup was a memorable one. “It’s been awesome,” he said. “I was really blessed with big bites all week. I gave it my all and put everything I had into it. This has been a life-changing event for me. I wanted that Cup, don’t get me wrong, but this check helps.” For his efforts, Canterbury walked away with $100,000 in prize money – a nice consolation prize if there ever was one. 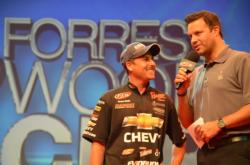 Thrift makes his mark … While he couldn’t pull out a victory, Bryan Thrift proved yet again that he is going to be a force to be reckoned with for years to come. With a FLW Tour Angler of the Year title already under his belt as well as multiple Tour victories, Thrift did nothing to change his image as one of the most promising young anglers in the business. “I’m not disappointed,” said the Chevy pro from Shelby, N.C. “But I feel like I was around the fish to win. Honestly though, Jacob fished an awesome tournament and he deserved to win. He fished great. I had my chances but I missed too many opportunities.” For his efforts, Thrift took home $75,000 in winnings. “To make the top 10, you can’t ask for anything more than that. I’m already looking forward to next year’s Cup,” said Thrift, who ultimately boated a four-day total of 52 pounds, 4 ounces. 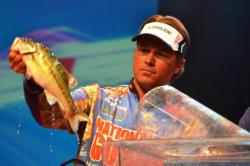 Martin misses out on back-to-back titles … As the winner of the 2011 Forrest Wood Cup, National Guard pro Scott Martin had a very legitimate chance of becoming the first angler in FLW history to win two Cup titles. But like the rest of the field, in the end, he came up a little short. “Jacob held his composure all week,” said Martin, who recorded a four-day catch of 51 pounds, 12 ounces. “He deserved to win.” For his efforts, Martin walked away with $60,000 in winnings. 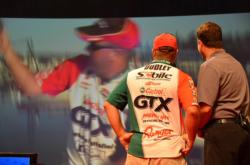 Dudley tries to mask disappointment … After entertaining bass-fishing fans all week with his stellar fishing skills and hilarious renditions of the “Chicken Dance,” in the end David Dudley managed to put a smile on everyone’s face except his own. Clearly frustrated by some execution issues which caused him to lose multiple fish over 4 pounds on days three and four, the Castrol pro did his best to put his fifth-place finish in perspective. “Given everything that happened this week, I guess I’m happy to be where I’m at,” said Dudley, who recorded a total catch of 49 pounds, 13 ounces to reap $50,000 in winnings. “But I really want this tournament out of my mind right now. I really want to forget all about this as soon as I can.” As one of the fiercest competitors on the Tour, it’s not surprising that Dudley wouldn’t be satisfied with anything other than a Cup title. However, the Virginia native can take solace in the fact that over the past two seasons, nobody has dominated the sport like he has – fashioning together an unprecedented two straight FLW Tour Angler of the Year awards, two FLW Tour victories and eight FLW Tour top-10 finishes in less than a 24-month span.

0. Number of anglers who have successfully captured two Forrest Wood Cup titles since the tournament’s inception in 1996. 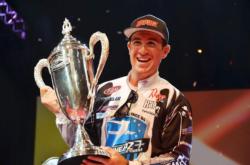 7-5: Jacob Wheeler’s total margin of victory in pounds and ounces.

9: Number of five-fish limits caught by the final day field.

12: Total number of stringers recorded over 14 pounds throughout the four-day duration of 2012 Forrest Wood Cup competition on Lake Lanier.

48: Total number of fish caught by the pros in today’s competition.

110-15: Total weight in pounds and ounces of fish caught on final day by pro field.

960: Total amount in thousands pocketed by the top-10 pro finalists at the 2012 Forrest Wood Cup.

“He’s a rookie but he’s not fishing like a rookie. He’s fishing like a seasoned veteran,” – Bass-fishing legend Hank Parker discussing Jacob Wheeler’s performance before the start of final weigh-in.

“I really didn’t know if we’d make the payroll (that first) Friday,” – Ranger Boats founder Forrest L. Wood jokingly responding to the question of whether he envisioned that his company would be this successful in 2012.

“I say let’s weigh in some fish. Some of these fish have never been to town before,” – Forrest L. Wood encouraging the start of final weigh-in.

“It’s nice to be on a roll like this. Hopefully it will continue,” – Castrol pro David Dudley discussing his stellar 24-month campaign that included back-to-back FLW Tour AOY awards.

“Dudley. You can’t beat that guy. He’s unbeatable,” – Evinrude pro Andy Morgan joking about being bested by Dudley at nearly every turn over the past few seasons.

“I ran up river and got stuck in the mud. So I turned to my cameraman and said, `This is probably shallow enough. Let’s go fishing,'” – Chevy pro Jay Yelas joking about his minor predicament in today’s competition. 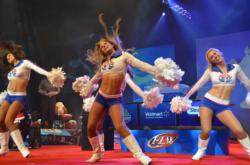