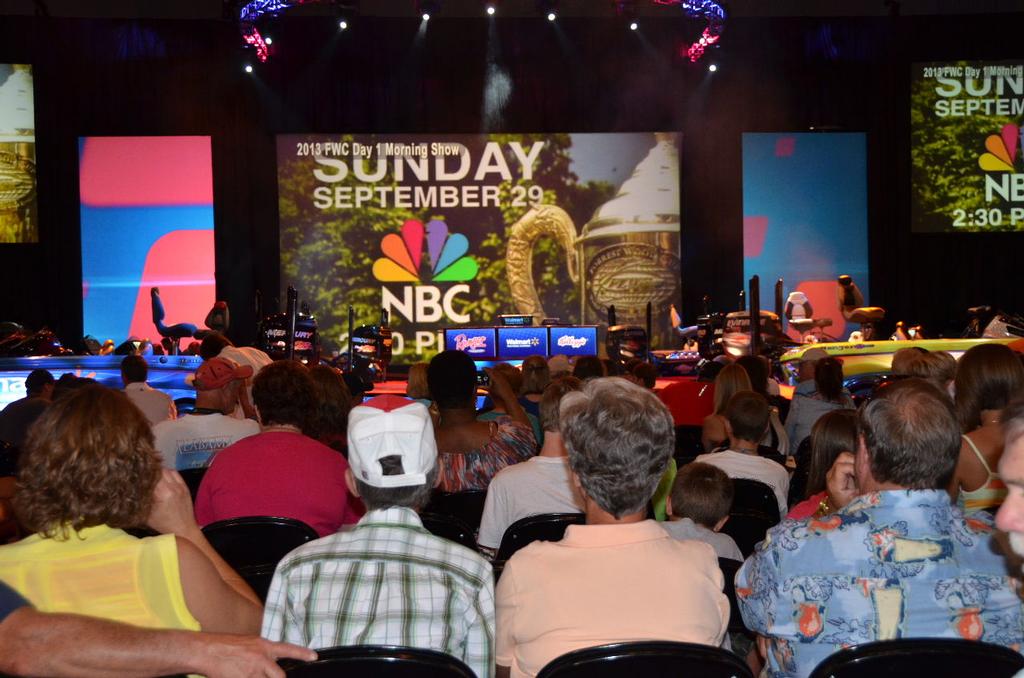 A packed crowd awaits the start of day-one weigh-in at the 2013 Forrest Wood Cup. Photo by Gary Mortenson.
The developing two-horse race, a 24-year-old has a career day and the Chicken Dance rears its ugly head once again
August 15, 2013 • Gary Mortenson • Tackle Warehouse Pro Circuit 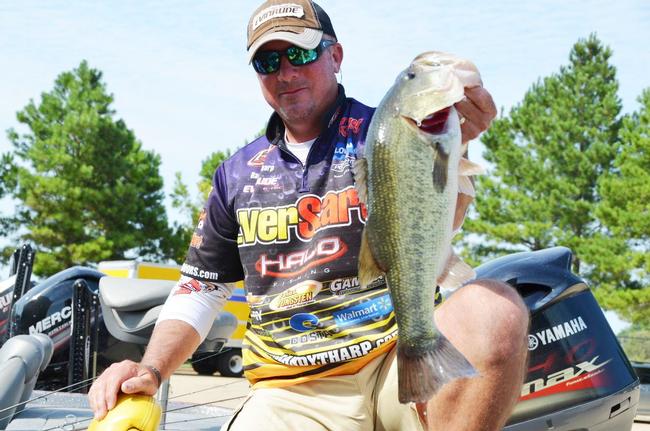 A two-horse race … Heading into today’s competition, the conventional wisdom was that it would take anywhere from 11 to 12 pounds a day to win the 2013 Forrest Wood Cup. However, apparently EverStart team pro Randall Tharp and Chevy team pro Bryan Thrift weren’t listening. By the time weigh-in had concluded, Tharp and Thrift had stunned the crowd with catches that almost defied the imagination given the brutally tough fishing conditions on the Red River. Tharp turned in a monster sack weighing 18 pounds, 8 ounces while Thrift produced a catch almost equally enormous at 18 pounds, 7 ounces. As a result, the next closest competitor – legendary pro Larry Nixon – was more than 5 full pounds behind in third place. “You really can’t explain a day like this,” said Thrift of his stellar day on the water. “I caught way more than I ever dreamed of catching.” Tharp was equally pleased with his good fortune and fishing savvy in the opening round of Cup competition. “To come in with that stringer, I feel very fortunate,” said Tharp. “I fished some good areas, but the bite for me didn’t turn on until later in the day. Finally I got in a little bit of a groove and caught some fish.” With nearly half of the field only able to boast stringers in the single digits and only two other sacks above 13 pounds, it certainly appears that the Forrest Wood Cup competition has now become a mano-a-mano clash between the pros from Port Saint Joe, Fla., and Shelby, N.C., going forward. 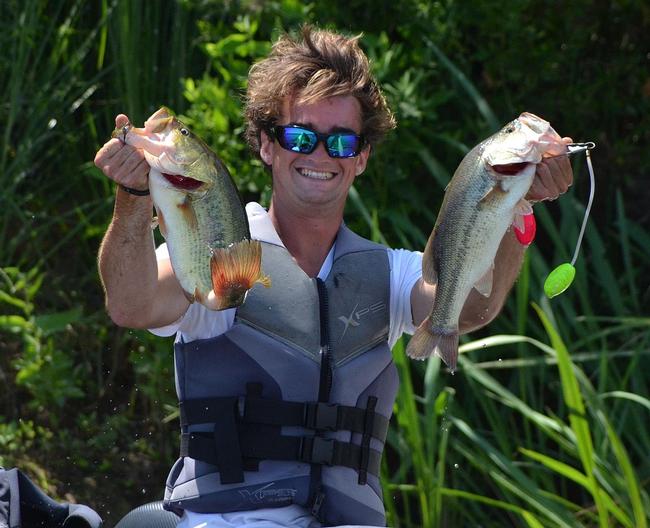 Great effort by a young chap … While Tharp and Thrift were pretty ecstatic with today’s results, nobody seemed more jubilant during weigh-in than co-angler Theo Corcoran of Kansas City, Mo. You see, the 23-year-old co-angler now owns sole possession of first place after throwing down a total catch of 14 pounds, 13 ounces. And with a top prize of $50,000 on the line, a nearly 5-pound lead and only one day of co-angler competition remaining, Corcoran could hardly contain his excitement. When he placed his fish onto the scales and learned his fate, Corcoran gave multiple fist pumps and then attempted to articulate just how special the moment was. “Being here at the Forrest Wood Cup … I’m shaking,” he said. “I’m just a kid chasing a dream. I can hardly talk.” But in the end, his actions spoke louder than words. 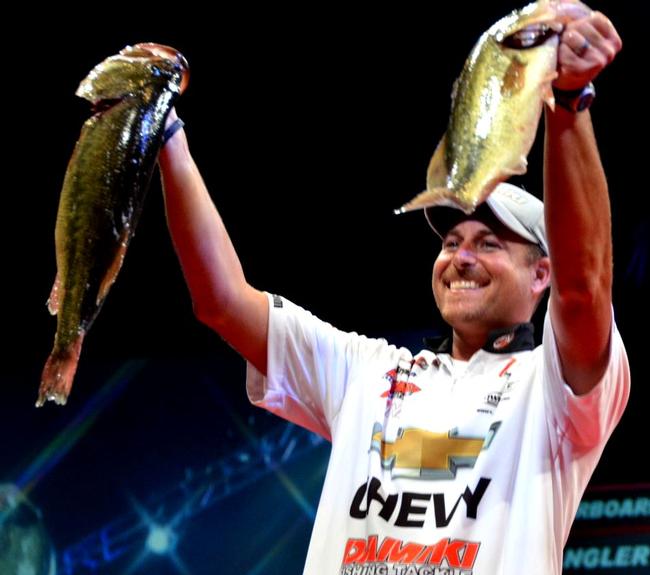 Tough day of fishing for most … With the exception of Tharp and Thrift, the majority of the field in both divisions experienced what many had anticipated heading into today’s competition – namely that big bites would be few and far between. As a steady parade of anglers walked onstage, angler after angler bemoaned the fact that they just weren’t able to get that one big bite. Sure they caught plenty of fish, but where were all of those 3-, 4- and 5-pounders? “It’s tough to get a big bite out there right now,” said Keystone Light pro Brent Ehrler, who won the Cup in 2006. “I had a lot of bites out there today, just not quality bites,” said Jacob Wheeler, winner of last year’s Cup. “The name of the game is getting that kicker bite and that eluded me today,” said FLW Tour pro Matt Arey. “I caught 25 keepers today but just never caught a 2-pound bite,” said FLW Tour pro Dan Morehead. 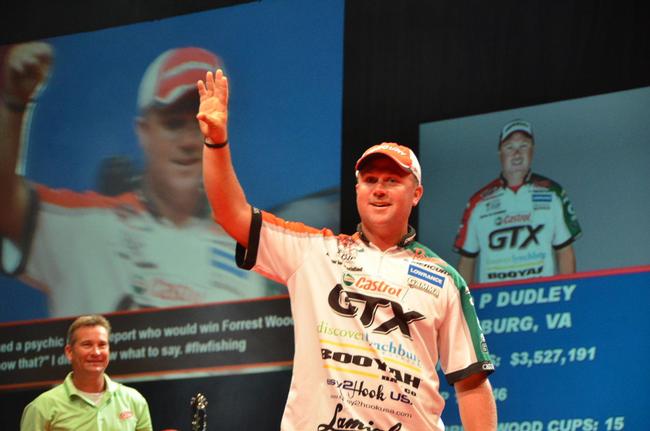 Chicken Dance redux … Last year Castrol pro David Dudley opted to eschew rock-and-roll, country, alternative and heavy metal music and instead be introduced onstage to the tune of the “Chicken Dance.” As it turned out, it was such a big hit with the fans that Dudley once again decided to reprise the stunt. With the Chicken Dance blaring in the background, Dudley came out in a dancing mood, strutting around onstage until he realized that there was definitely a lack of fan involvement. As a result, Dudley issued the crowd a challenge … as well as dangling a potential prize package in front of them. “Do you all know what the Chicken Dance is?” said Dudley. “I’m going to give away a jersey tomorrow. And whoever I see getting their groove on tomorrow is going to get that jersey.” So bass-fishing fans of Shreveport, start practicing … or get a set of ear plugs. Your choice.

Rowland miscounts … Legendary angler Zell Rowland is known for a lot of things – one of the greatest topwater anglers to ever play the game and one of the nicest anglers on Tour to name just a few. However, one thing he is not going to be remembered for is his math skills … apparently. Today, Rowland made the unfortunate mistake of bringing in six fish, one more than the legally permitted limit. As a result, he was penalized 2 full pounds and finished the day with an official weight of 8 pounds, 13 ounces – which dropped him into 30th place overall, a disappointment to be sure. “I miscounted and had six fish,” said Rowland. “Everything went really well this morning. Then I pulled up on a good spot and caught one more fish that I thought I needed.” However, despite the setback, Rowland said he’s still in the game. “The area I’m fishing has a lot of good fish in it. So hopefully it will all work out tomorrow.”

1: Total number of pros in this year’s Cup field who captured more than one FLW Tour title in 2013: Jason Christie (Beaver Lake and Grand Lake).

1: Number of ounces separating first and second place after the first day of Cup competition.

2: Total number of anglers competing in this year’s pro field who have captured titles in both the Forrest Wood Cup and Bassmaster Classic (Luke Clausen and David Fritts).

4: Number of poisonous snakes found in the Red River basin.

6: Most top-10 Forrest Wood Cup finishes by an angler (David Dudley) in this year’s field. 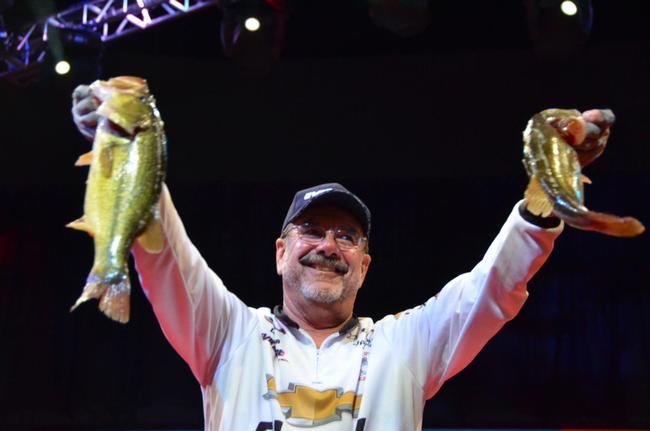 15: Most Forrest Wood Cup appearances by an angler (Andy Morgan) in this year’s field.

22: Age in years of the youngest angler (Jacob Wheeler) in this year’s Cup.

30: Total number of limits caught by co-anglers during the opening day of Cup competition.

46: Total number of pros in the competition.

69: Age in years of the oldest angler (Jimmy Houston) in this year’s Cup.

283: Total weight in pounds and ounces of fish caught on day one by entire co-angler field.

452-2: Total weight in pounds and ounces of fish caught on day one by pro field.

“With this cold front, the water temperatures dropped 10 degrees in my (main) area. I was fishing topwaters and the fish just wouldn’t come up to bite.” – 2012 Forrest Wood Cup champion Jacob Wheeler talking about his difficult day on the water which dropped him all the way to 40th place and pretty much sabotaged his chances for a repeat title.

“It’s almost impossible for me to come by one.” – Cody Meyer, lamenting his inability to land any type of kicker fish at all during today’s competition.

“Realistically not catching them on the first day is not a good thing.” Castrol pro David Dudley on his dismal chances of getting back into the title hunt after falling more than 9 pounds behind the day-one leaders. 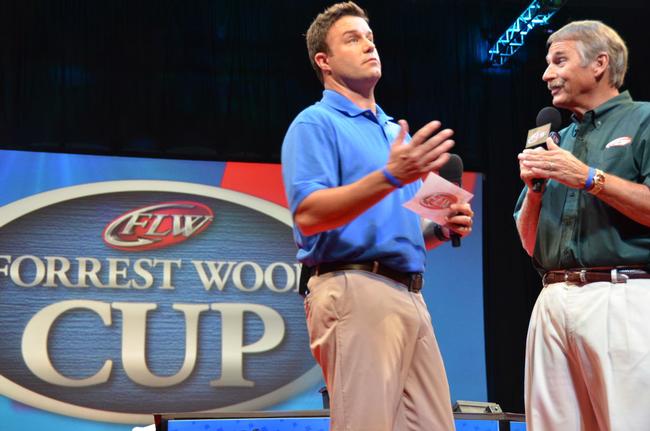 “The water temperature was 101 degrees in some places and you really can’t count on catching 18 pounds in that type of water.” – Bryant Thrift on his amazing, day-one adventure on the Red River.

“Today was actually one of my better days. I’m really looking forward to tomorrow. Hopefully I can put some more fish in the boat.” – 2013 TBF National Champion Mark Daniels Jr., who parlayed an 11-pound, 12-ounce catch into an eighth-place finish in today’s pro competition.

“I still have a glimmer of hope. Hopefully there are a few kickers with my name on it.” – M&Ms pro Jim Moynagh on his chances of making the top-20 cut.

“I’m just going to go out tomorrow and fish my red-headed heart out and see how it goes.” – Walmart pro Mark Rose.

“I had to save the worst day of the year for the Forrest Wood Cup.” – Co-angler Mark Jones, who wound up being the only competitor to produce zero fish on day one of Cup competition.

“The bait is old, old, old. It’s older than me and you. But if I can just get it around fish, they’ll bite it.” – David Fritts, talking about his secret time capsule of a lure that so far appears to be working out just fine.

“I’m very surprised at the weights today. We have a pretty big hole to dig ourselves out of.” – 2013 FLW Tour Angler of the Year Andy Morgan speaking realistically about the chances that the rest of the field can catch up to Tharp and Thrift.