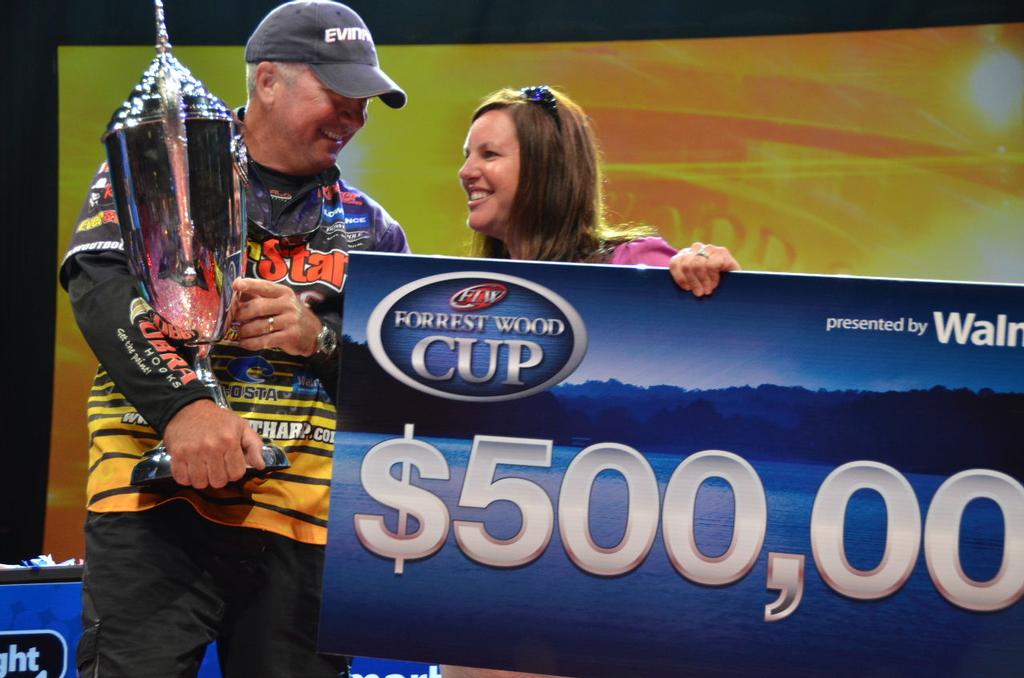 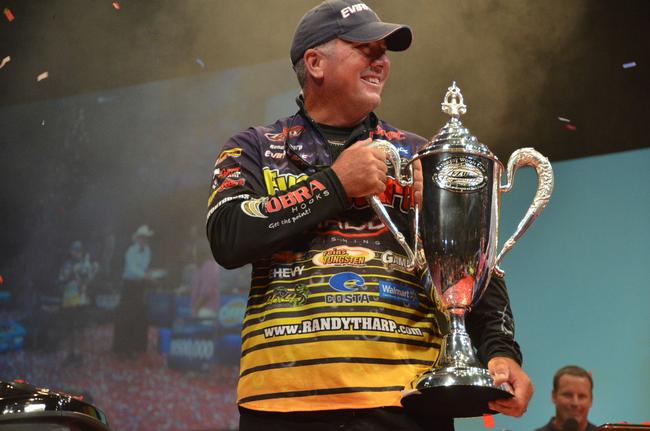 One for the history books … In 2011, EverStart team pro Randall Tharp of Port Saint Joe, Fla., thought he had fished the perfect Forrest Wood Cup only to lose out at the very end to FLW Tour pro Scott Martin on Lake Ouachita. Although Tharp walked away from that tournament $100,000 richer, he couldn’t help but think of what might have been. “I fished a perfect tournament (in 2011) and to not win really stung.” Cut to the 2013 Forrest Wood Cup and Tharp ironically found himself in second place once again after day three despite leading the event for the first two days of competition. So would Tharp wind up suffering the same fate today? Surely that thought had entered his mind. However, on this day, when it mattered most, Tharp calmed his nerves, stuck perfectly to his game plan, boated a 14-pound bag and never looked back, capturing the 2013 Forrest Wood Cup title in relatively easy fashion. With a total four-day weight of 53 pounds, 2 ounces, Tharp grabbed hold of the title that had eluded him throughout his career, netting a $500,000 payday and a place in the history books in the process. “When I saw this place on the schedule it’s all I could think about,” said Tharp. “It’s the way I love to fish. It’s just been kind of surreal. But I’ve had a lot of fun.” Tharp said that he made a key change to his arsenal during the finals, deciding to flip a frog – a technique which he hadn’t employed all week but paid massive dividends during the finals. “I caught my three biggest fish on that bait today.” In the end, with his wife, trophy and giant $500,000 in tow, Tharp reminisced about the greatest moment of his fishing career. “The fans here this week have been absolutely phenomenal. When I’d catch a fish everyone would cheer and you don’t get that at just any tournament,” he said. “What a great place to go fishing. What a great week.” It’s undoubtedly a week he’ll never forget. 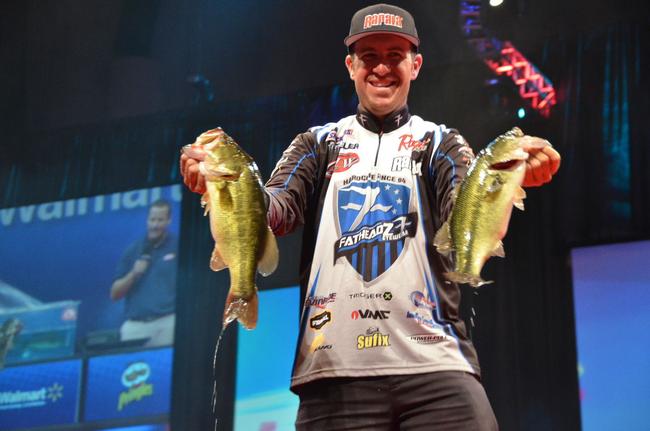 Wheeler almost pulls off miraculous finish … After the first day of competition on the Red River, defending Forrest Wood Cup champion Jacob Wheeler of Indianapolis, Ind., found himself six places from dead last in the standings. But it wasn’t until his girlfriend poked fun at his measly 7-pound, 4-ounce catch that it really sunk in just how far he’d fallen, literally and figuratively. “I know in these types of big events you need to fish to win, and that first day I didn’t do that. I fished way too conservatively. I said to myself, `You’re the reigning Forrest Wood Cup champion; you really have to step up your game.’ And that’s exactly what he did. After boating 13 pounds, 7 ounces on day two, Wheeler rocketed up the standings from 40th to 18th place. Then, on day three, Wheeler smashed them again, landing a 14-pound, 4-ounce stringer – the largest sack of the day – and vaulted all the way into fourth place, a mere 4 pounds and change behind first-place pro Bryan Thrift. So what did Wheeler do in the finals? He simply recorded the largest stringer of the day once again, hauling in 14 pounds, 3 ounces. Unfortunately for Wheeler, he ultimately couldn’t catch Tharp and had to settle for second place and a check for $75,000. But for the 22-year-old Indiana native, this tournament proved that he was no fluke. In fact, Wheeler has already accomplished in two short years what many legendary pros have been chasing for a good chunk of their careers … to no avail. By the time weigh-in had concluded, Wheeler attempted to put his stunning two-year Cup run into perspective. “This Cup was the exact opposite of last year’s Cup. Last year I grabbed a big lead early and carried it all the way to the finals. And this year, I had to make a comeback every day. I didn’t lose any key fish, I made all the right decisions and almost pulled it off. It’s just crazy. It seems like these big tournaments just bring out the best in me.” 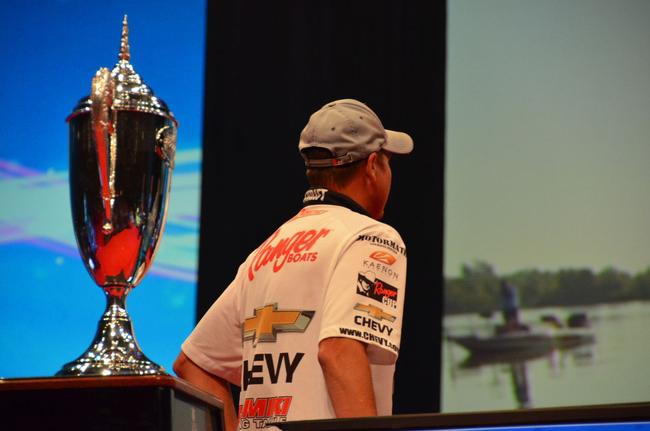 Heartbreak hotel … While Tharp and Wheeler had literally thousands of reasons to be pleased with the final outcome of this year’s Forrest Wood Cup, two anglers in particular had their fair share of heartache when all was said and done. For starters, Chevy team pro Bryan Thrift of Shelby, N.C., saw his day-three lead literally evaporate onstage as he could only muster a final-day catch of 6 pounds, 11 ounces – by far his worst stringer of the entire tournament. Although he did manage to secure a third-place finish and a nice check for $60,000, it was obvious that Thrift wanted this title badly. And it was right there for the taking. However, if there was one silver lining for the North Carolina native, it was that he has plenty more years to get back into that same position. Larry Nixon, on the other hand, knows that time is running out and that opportunities to win the Cup don’t come along every day. While Nixon isn’t ready to retire just yet, it was clear that his fifth-place finish hurt. Although “The General” had climbed to within 2 pounds of the leaders heading into day three, he found his prime fishing hole completely muddied up on Saturday, a fact which forced him to scrap his plans and basically start all over again. In the end, the Arkansas native and one of the most beloved anglers on Tour just wasn’t able to recover. “As everyone knows, I’m pretty disappointed,” said Nixon, who at times seemed to struggle to keep his emotions in check. “But it was a great week. Anytime you get to fish for four days at the Forrest Wood Cup, it feels good. But this is the one tournament where you really go for it. So yeah, I’m disappointed.” 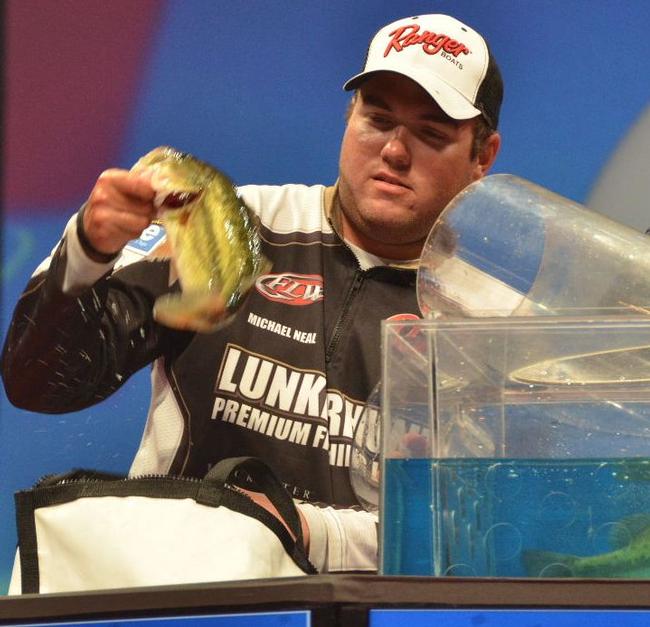 Flying under the radar … Of all of the top-10 pro finalists, the least recognizable name was arguably Michael Neal of Dayton, Tenn. Fishing in only his second season on the FLW Tour and the first year he’s actually fished all six FLW Tour events, the 21 year old proved that he was definitely worthy of bass fishing’s biggest stage. “It’s just amazing,” he said. “I finished 20th in the points this year and that’s way more than I could have hoped for.” Neal said that this season was almost a dream come true on every level. “I kind of accomplished a couple of goals this year. I made two top-10 finishes (the FLW Tour events on Lake Okeechobee and Lake Chickamauga) and qualified for the Forrest Wood Cup. Going into this season, I just wanted to make the show. And I did that. After that I just kept stepping up my goals. I made the top 20 and then I wanted to make the top 10. After that my goal was to finish in the top five.” While Neal ultimately had to settle for sixth place, his season could be summed up as a complete success by any conceivable metric. “This is what I’ve always wanted to do. I’m just really fortunate to have had the opportunity.” So is Neal still flying under the radar? “I’m trying to.” 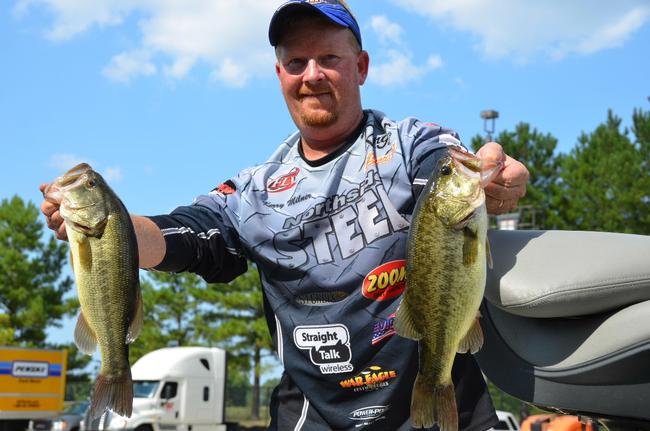 Milner impresses … Like Neal, Kerry Milner of Bono, Ark., didn’t have a whole lot of experience fishing FLW Tour level events heading into the Cup. In fact, Milner’s only previous FLW contest was an FLW Tour Open in 2012 on Wheeler Lake where he finished in a pedestrian 68th place. But after winning the 2013 BFL All-American title, Milner’s confidence grew. Then, suddenly, Milner found himself standing onstage at the 2013 Forrest Wood Cup during the final day of tournament action surrounded by the likes of Randall Tharp, Bryan Thrift, Larry Nixon and Mark Rose … just to name a few. And wouldn’t you know it, Milner acquitted himself quite nicely, walking away with a fourth-place finish and a check for $55,000. “I was really looking forward to this tournament because I wanted to prove that I could compete against these guys,” said Milner. “I really wanted to make the top 10 and I did that. Today, I kept waiting for those bigger bites but they never came.” However, what did come was the recognition that Milner has as bright of a future in this sport as anyone. And you can’t put a price tag on that. Because after all, isn’t that what the Cup is all about?

4: Number of pounds separating first and second place after the final day of Cup competition.

10: Total number of limits caught by top-10 pro field during the finals. 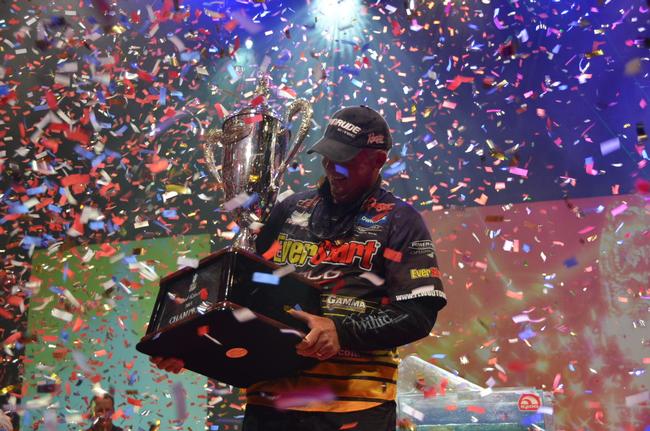 21: Age in years of the youngest angler (Michael Neal) in this year’s Cup competition.

98-2: Total weight in pounds and ounces of fish caught by top-10 pro field on final day of Cup competition. 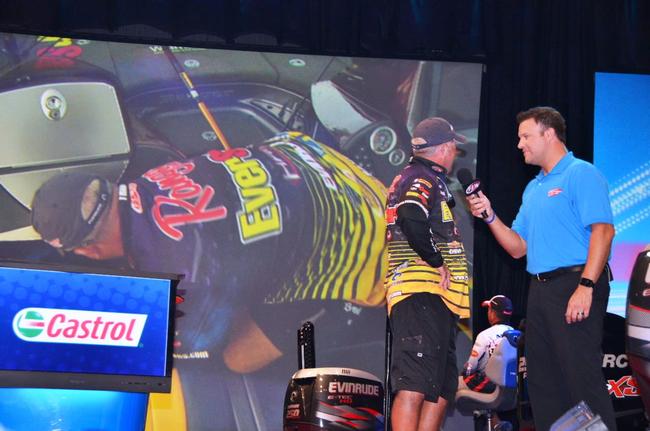 “I caught my three biggest fish on a frog today and I didn’t fish a frog all week until today.” – Randall Tharp talking about the change in strategy that helped him to secure today’s title.

“Think about how excited these fish will be. A lot of them have never been to town before.” – Ranger Boats founder Forrest L. Wood cracking a quick joke before day-four weigh-in.

“What more could you ask for? I got to go fishing on the last day. This is as good as it gets.” – Tom Monsoor.

“Jacob Wheeler, here we go again.” – Forrest Wood Cup tournament host Jason Harper accurately noting the Indiana native was once again surging up the leaderboard when it mattered most.

“On day three I had boat problems and Adrian Avena had to come and pick me up. Had he not done that, I probably wouldn’t have (qualified) for the finals. Adrian wound up in 11th place (and missed the cut) that day. So I can’t say enough about the type of person Adrian is.”

“I think I need to catch one that could’ve eaten all of the four fish I caught today.” – Robbie Dodson joking about his tiny four-fish limit in today’s finals.

“What would you do for $500,000?” – The first words spoken by Walmart team pro after resurfacing from an underwater adventure in an attempt to land a fish that had been hung up below his boat on some timber.

“The first day of the tournament my girlfriend comes over and says, `Those are some baby bass.'” – Jacob Wheeler recounting the moment on day-one where he knew he was going to have to start stepping up his game or be content to settle for 40th place. 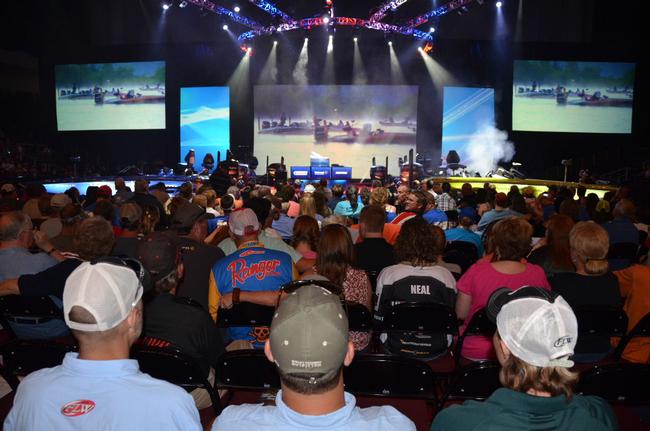