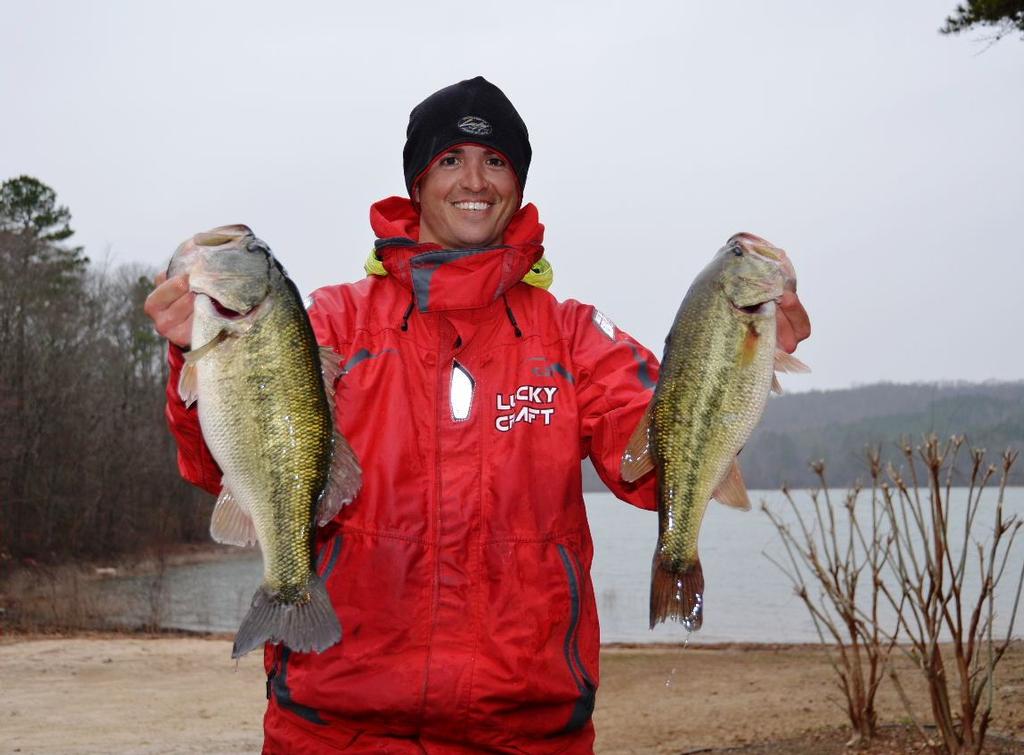 SENECA, S.C. – Casey Ashley may be fishing his first Walmart FLW Tour season, but he’s no stranger to big-time tournaments on Lake Hartwell. One in particular still sticks with him and not for good reason. Today, he put some big-time revenge on the Hartwell bass – catching a 21-pound, 7-ounce stringer on a day where less than half the field cracked double digits.

With temperatures in the mid-40s and a steady 20 mph northeast wind, the conditions made a tough bite even tougher. Right as the day-one weigh-in commenced, the rain started and isn’t supposed to let up until Friday afternoon. None of this affected Ashley, who fishes Hartwell often and knew the bite was screwy thanks to a cold and unpredictable spring.

“Four weeks ago the lake was on fire and you could catch them any way you wanted to, from 2 feet to 50 feet,” said the 30-year-old pro leader. “Now they are just roaming. I had some good stuff that I found in practice and I caught some pretty good fish. I fished some stuff that had gone well in practice and didn’t get bit today. I caught my better fish today on stuff that I didn’t even practice. And the wind was so bad I didn’t get to fish all my stuff. I really only hit what was protected.”

Ashley said he fished two or three different creeks, received 20 bites and weighed all largemouths, despite catching several spotted bass. He started the day on what he termed a schooling spot over deep water. He caught three there, then moved to a different area and caught a 3-pounder. After another move and another 3-pounder, a pattern was clearly established. Ashley was reluctant to discuss that pattern other than mentioning he used only three rods and that a jig played a major role.

“By nature I’m a shallow-water fisherman, but I caught some deep too. When the lake gets really clear like this, those big ones get up there shallow and you can catch them when you get some nasty weather. I just know where they live. I had no clue though that I could catch that much. This morning was actually a little disappointing. I expected to really catch them there. If that schooling bite happens, you can get right real quick.”

Ashley said while he’s been looking forward to this tournament, he also has his sights set on the schedule’s other South Carolina tournament – the Forrest Wood Cup on Lake Murray.

“After finishing 116th at Lake Okeechobee, I needed this today. This is revenge.” 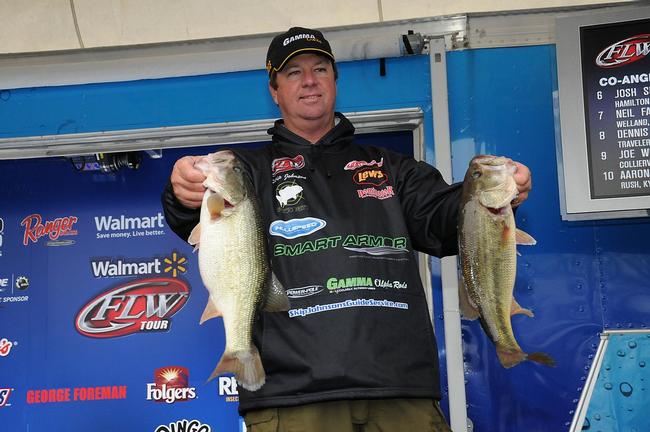 While Ashley is a rookie in name only, Skip Johnson is a true newcomer. Like Ashley, he struggled out of the gate at Okeechobee. But on the final day of his Hartwell practice he found a little honey hole that is producing big. Today, it produced precisely five bass for 19 pounds, 4 ounces, all of which were nearly-identical 4-pounders.

“It’s about a 2-foot flat with a 4-foot creek channel in the middle,” said Johnson, the Lake St. Clair guide who lives in Goodells, Mich. “I got there this morning, put my Power-Poles down and caught one every single cast for about my first 20 casts. I had it dialed in perfectly. I sat in one spot and was done fishing at 8:45 a.m. It was one of the best days of fishing away from St. Clair I’ve had in years. To have it happen in such a major tournament like this is awesome.”

Johnson said he used one lure – a Strike King Red Eye Shad in Chrome Blue Back color. He found the area when he saw bait breaking the surface. From there, it was simply a matter of matching the hatch, which the Red Eye Shad did perfectly.

“I’m pretty sure I can catch them tomorrow, but my biggest concern is someone beating me to the spot. I’m boat No. 87 tomorrow and the cat is pretty much out of the bag about where I’m fishing. I’m going to have to pull some tackle in order to get there first.” 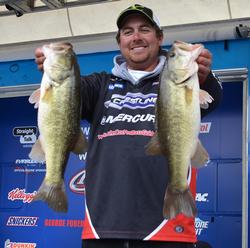 After a disastrous Okeechobee event where he had several giants located on beds only to disappear, John Cox has rebounded nicely in South Carolina.

“It was rough, it was nasty, but they bit for me today,” said the Debary, Fla., pro. “I was shooting for 11 or 12 pounds, but I caught 30 keepers today. I was basically running the bank for largemouths and I hit a couple key stretches where I’d catch them back to back. When you caught one, you’d catch like three.”

Cox said he started his day in the stained water, but switched halfway through. His key baits were jigs, swimbaits and crankbaits – mostly fishing in water 10 to 12 feet deep.

“I caught most of my weight by 11 a.m. but I did catch some in the clear water, which kind of surprised me. I think today was just a sample of what it could be like. I hope to make it to Saturday when it’s warmer because I think it could get really good.” 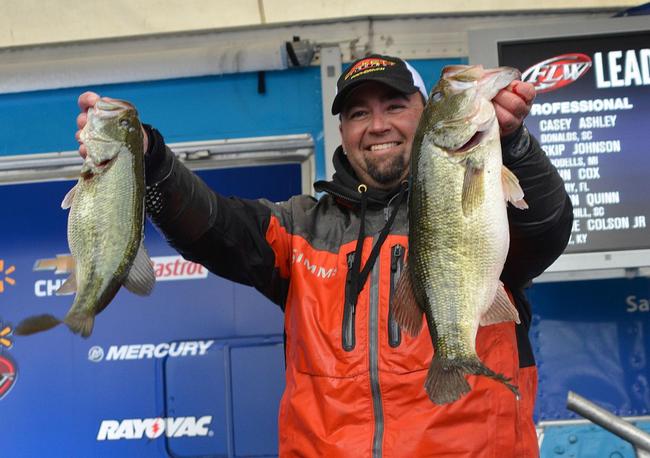 While most anglers were bemoaning the weather, Jason Quinn was enjoying it. The Rock Hill, S.C., pro caught 18 pounds, 9 ounces Thursday and sits in fourth place.

“I think I can do it again tomorrow,” said Quinn. “I like it when it’s cold and nasty like this.”

Like Ashley, Quinn has the semi-local advantage working for him this week.

“I live like an hour and a half away so I know how to adjust. The fish are trying to do one thing, but they’re really not doing it. But they’re not grouped up on the bottom either.”

Quinn said he caught 12 keepers total – seven largemouths and five spotted bass, although he weighed only one of the spots.

“I fished fast, but slow. I didn’t want to run around the whole lake because that can take up a lot of your time, so I narrowed it down to a couple areas and then moved around a bunch. Overall I like the lake, I understand the lake and I think real big bags are possible this weekend.”

Quinn said he ran one pattern and it was so specific that he couldn’t reveal it just yet. 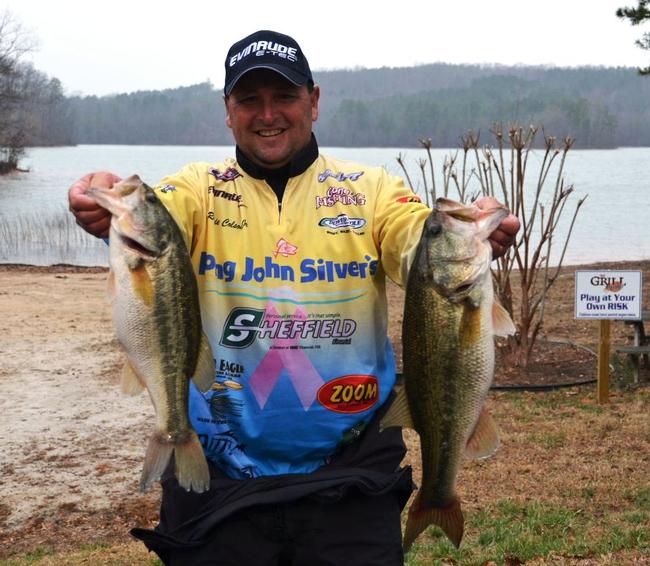 Ramie Colson Jr. is at it again on Lake Hartwell. This time he is not sharing Beaver Dam Creek with Jason Christie like in 2011, although ironically, the two did encounter each other there on the final day of practice.

“I had a real tough practice,” said the Cadiz, Ky., native. “So I just tied up four jigs, chose one creek that was close and fished slowly. I figured that was my best chance. I only got seven bites all day but they were largemouths. I got one right off the bat and I had my limit by 11:15.

“I was fishing how I like to fish. I put the boat in about 15 feet of water and then I casted up towards transition banks and it worked.”

Rounding out the top 10 pros on Lake Hartwell after day one: 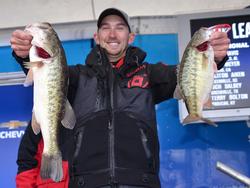 Lake Eufaula champion Bryan New is back in the driver’s seat in the Co-angler Division after catching a day-one limit weighing 14 pounds, 3 ounces.

New said he switched to a Shooter Lures jig after that. He didn’t upgrade with it, but it showed him he could drag a jig if necessary – something he believes will help him later in the tournament.

“I wouldn’t say I fished shallow or deep today. I would call it the mid-zone. It’s nice to catch them again. Last year I went through a stretch where it felt easy but lately it’s been tough on me.” 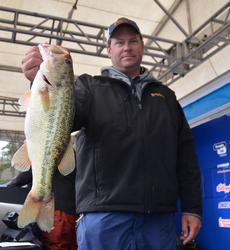 The Sulphur Springs, Texas, co-angler caught a 13-pound, 11-ounce limit that included a nice kicker largemouth. This is only Redington’s second FLW tournament of his career – the first being a 58th-place finish at Okeechobee last month.

Brandon Booher of Bristol, Tenn., caught a 12-pound, 4-ounce limit for third place among the co-anglers.

Dennis Kirby of Lakeland, Tenn., rounds out the top five with 12 pounds even.

Day two of the FLW Tour on Lake Hartwell will begin Friday at 7 a.m. from the Clemson Marina, located at 150 Clemson Marina Drive in Seneca, S.C.