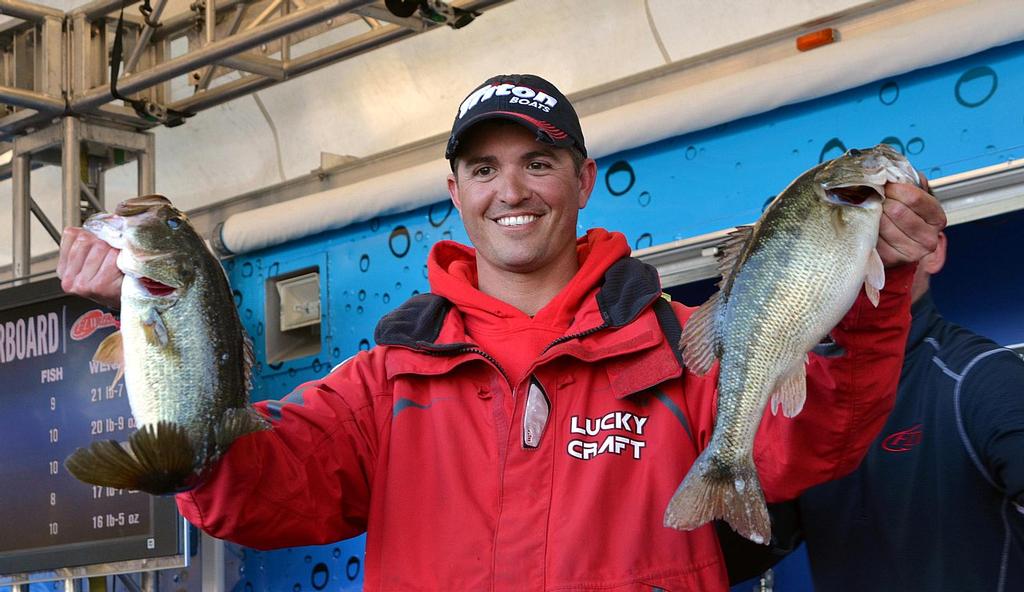 SENECA, S.C. – It was inconceivable to think the conditions could get any worse at the Walmart FLW Tour event, but that’s exactly what happened on day two at Lake Hartwell. In addition to the wind and cold, steady rain pounded the field and changed the water color in many of Hartwell’s popular creeks from stained to burnt orange.

The bite changed for pro leader Casey Ashley, but he was still able to build his lead to nearly 3 pounds. Instead of catching mainly largemouths, today Ashley weighed four sizeable spots and just one bucketmouth. 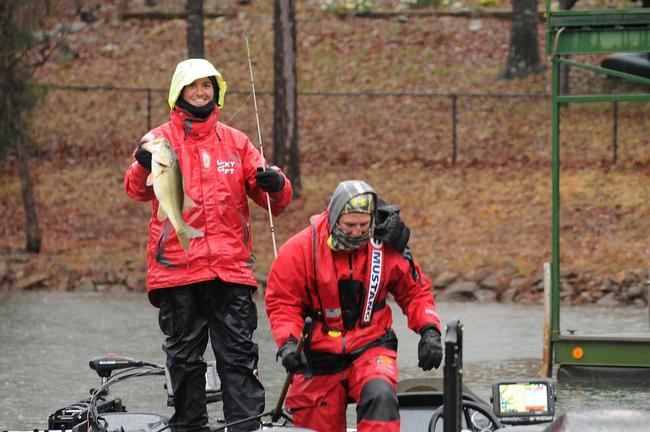 “Yesterday was really a freak thing,” said Ashley who lives in nearby Donalds, S.C. “I made every right move yesterday. It took me until 1 p.m. to get a limit today, but then I culled six or seven times. It’s slow fishing. I’m picking off one here, and one there. I was able to fish some new stuff today because the wind blew out of another direction and I was able to fish where I couldn’t get to yesterday.”

Ashley said that he has been catching most of his fish this week on a jig and a shaky head. The lone largemouth that he weighed Friday came via a swimbait in the back of a creek, something he rarely throws. Other than starting each morning on schooling fish, Ashley’s overall pattern is still unclear.

“I’m spending a lot of time in the right areas and just fishing methodically and precisely. The sun doesn’t really help or hurt me. The fish that I am catching now are relating to what they relate to for different reasons. They just live there, like a brush pile under a dock.” 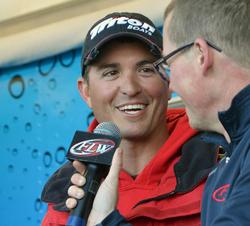 With a two-day total of 10 bass weighing 37 pounds, 4 ounces, Ashley has nearly a 3-pound lead at the halfway point in the tournament.

“This is a dream come true to fish a big tournament on your home waters like this and have it work. The weather has been nasty, but it’s changing every day. I’m just taking it day by day, because I know that the fish are going to change, too. Right now, they are not real active. I think that if we get another warming trend we’ll get another wave of them to pull up. I’ve got three Shad Raps tied on just waiting for that bite to emerge.

Cox slides up to second 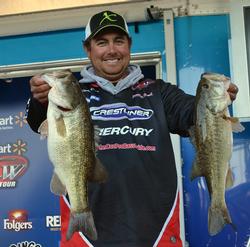 It’s hard to believe considering his Florida experience, but John Cox is catching bigger stringers this week on Hartwell than he did last month on Lake Okeechobee. Yesterday he weighed 18-13 after sorting through dozens of keepers and today he caught 12 with his best five weighing 15 pounds, 11 ounces.

“I caught them before the dirty water got in my area,” explained Cox. “Not only was it muddy, but the temperature dropped some more. After that the bite shut down.”

The Debary, Fla., pro said he caught one of his better fish pitching to a lay-down, but his main pattern is simply chunking and winding down the bank with crankbaits and swimbaits.

“I ran mostly the same stuff today, but right now I’m in brainstorm mode about where to go tomorrow. I don’t really know that I’ve figured anything out; I’ve just had two good days of fishing where I got the right bites.”

All of Cox’s keepers were largemouths and he’s hoping more of the green giants will come to the bank as the sun and warmer weather arrives tomorrow. 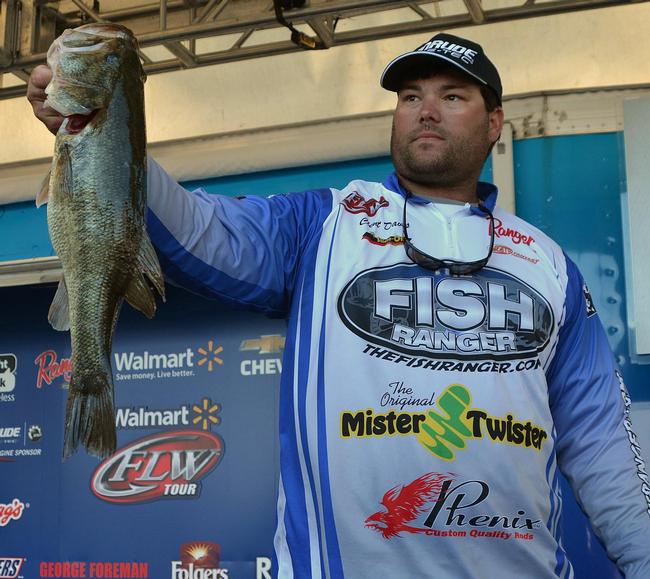 Davis said the sun is absolutely critical to his bite. With sunshine, small blueback herring rise up and he can see them both visually and on the graph. After catching a fish on his first stop this morning, Davis went three or four hours without a bite. Then the sun popped out and it was game on.

“That’s when I caught pretty much all of them. I ran around like crazy in that little window, caught a limit and culled four times.”

Davis likes his chances the next couple days for two reasons. No. 1 is that he hasn’t seen another tournament boat and No. 2 is the sunny forecast. As for his pattern, Davis said he’s fishing a shaky head painfully slow – almost to the point where he is dead sticking it.

Just like Cox and Ashley, this tournament has been absolutely critical for Davis’ Forrest Wood Cup chances after a bomb at Okeechobee.

“My last three Tour events have been bad. Okeechobee I can’t explain; I’ve always done pretty well there. But I needed this.” 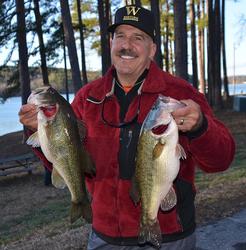 Local dentist Barton Aiken has dedicated this tournament to his friend Kenny, who passed away six months ago. With only two fish in the boat at 2 p.m. on the first day, Aiken paused and said, “OK Kenny, let’s go.” Aiken then caught five in the final hour.

“My last four fish that first day came off places I haven’t fished in eight years,” said Aiken. “It was magical.”

Needless to say, the first two days have been eventful for Aiken as he’s also overcome mechanical issues and a mental error. Still, he sits fourth overall after catching consistent limits of 16-0 and 15-11.

“I feel very blessed to have done as well as I have. I made a major mental mistake today that cost me about an hour of fishing time. I had a fish scale hanging off one of my treble hooks (which changed the action of his lure).”

Aiken revealed today that he is fishing “medium depths” with primarily crankbaits and spinnerbaits. He too believes that his areas are about to blossom.

“I’m still surprised that so many of my good places are not producing. I’m catching a lot of fish by stopping on whimsical places, so it’s been a thrill a minute.

“Overall, this is my home lake and I’ve been dreaming of competing against these guys.” 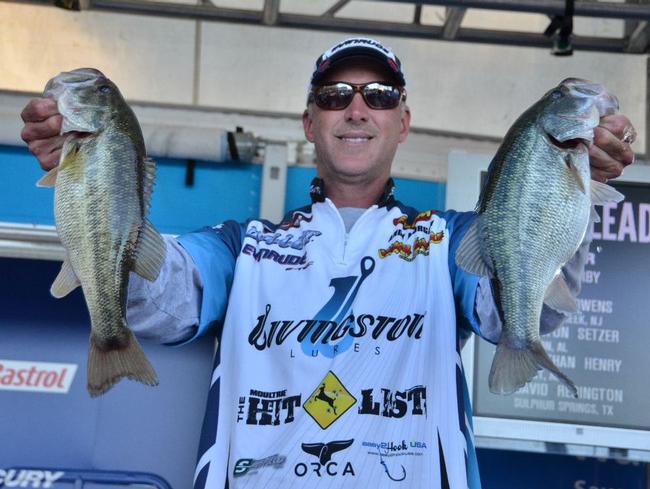 Take a look back to last year’s Smith Lake event where Andy Morgan steadily climbed the leaderboard and was among the first to adjust as the weather improved. A nearly identical scenario is playing out this week on Lake Hartwell.

After catching 14-15 yesterday, the defending Angler of the Year caught 14-13 today to move up to fifth. Not surprisingly, Morgan is targeting largemouths exclusively.

“What I’ve learned is that there’s not that many fish up, but not that many people are fishing for them either,” said Morgan. “I fished a different area of the lake today than I did yesterday. I’m basically trying to get in front of the fish – catch those fresh fish.”

Morgan said he’s only caught seven or eight keepers each day. At this point, he was unwilling to reveal his lure selection, but it’s no real secret what he’s doing.

“When I come to Hartwell in March I’m fishing shallow.”

Rounding out the top 10 pros on Lake Hartwell after day two: 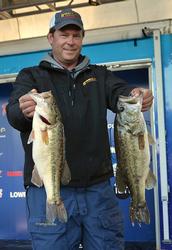 David Redington, brother of FLW Tour pro and Lake Fork guide Tom Redington, surged into the lead Friday with a 17-pound, 13-ounce limit. Redington’s 17-13 was not only the heaviest co-angler stringer of the tournament, but it was the second biggest among both pros and co-anglers Friday.

“Usually I come in early and practice with Tom,” said the younger Redington. “For this one I flew in on Wednesday before the tournament and booked my return flight for Saturday.”

After catching an opening-round total of 31 pounds, 8 ounces, Redington will have to adjust his travel plans to fish the final day.

“I only got five bites yesterday and six bites today, but I’ve been fortunate enough to get the right bites. Everything I’ve caught has come off a homemade vibrating jig with a Lake Fork Live Magic Shad as a trailer. I don’t like to fish deep like Tom. I like fishing shallow and all my fish so far have been largemouths.”

With nearly a 7-pound lead, Redington is in great position to capture a win in only his second FLW Tour event.

“I told Tom I’d be ecstatic to have five keepers today and that’s how I’m going to approach tomorrow too.” 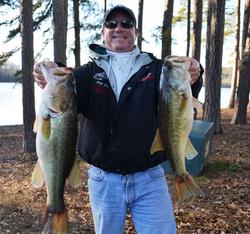 While Redington is new to FLW Tour competition, Todd Lee can best be described as an accomplished veteran. The two-time FLW Tour champion has 20 tour-level top-10 finishes and has qualified for the Forrest Wood Cup a whopping 15 times. Today he caught the second-biggest bag (15-9) among the co-anglers, and finished the opening round with 24 pounds, 15 ounces.

“As a co-angler, you never catch them unless you have great partners,” said Lee, who calls Smith Lake in Jasper, Ala., home. “I caught seven or eight keepers yesterday behind Leon Williams and today I caught 10 or 12 keepers with Stetson Blaylock, who I consider one of the best young fishermen in the country.”

Lee said the main difference between day one and two was simply catching a couple kickers. Today his pivotal largemouth weighed approximately 5 1/2 pounds and he had another in the 4-pound class.

“I’ve caught all of my fish this week on a drop-shot with a 6-inch Roboworm in morning dawn color. Most of the time I’m fishing in water 8 to 14 feet. Everything has gone just about well as it could have for two days.”

New, Cameron, Self round out top five

Day-one leader Bryan New slipped to third after catching four bass Friday that weighed 7 pounds, 4 ounces. New said he only received those four bites all day, three of which were largemouths.

“Barry (Wilson, his pro partner) fished way back in the creeks today, in like 1 to 4 feet of water,” said New, the 2013 Lake Eufaula champion. “For what I was doing and where I was at, I think I did great today. I executed on everything that bit.”

New said he caught his fish on a rattlebait and a shaky head with a Charlie’s Worms finesse worm. His total weight sits at 21 pounds, 7 ounces.

Eric Self of Lawndale, N.C., rounds out the top five with 20 pounds, 9 ounces.

Rounding out the top 10 co-anglers after day two:

Day three of the FLW Tour on Lake Hartwell will begin Saturday at 7 a.m. from the Clemson Marina, located at 150 Clemson Marina Drive in Seneca, S.C.