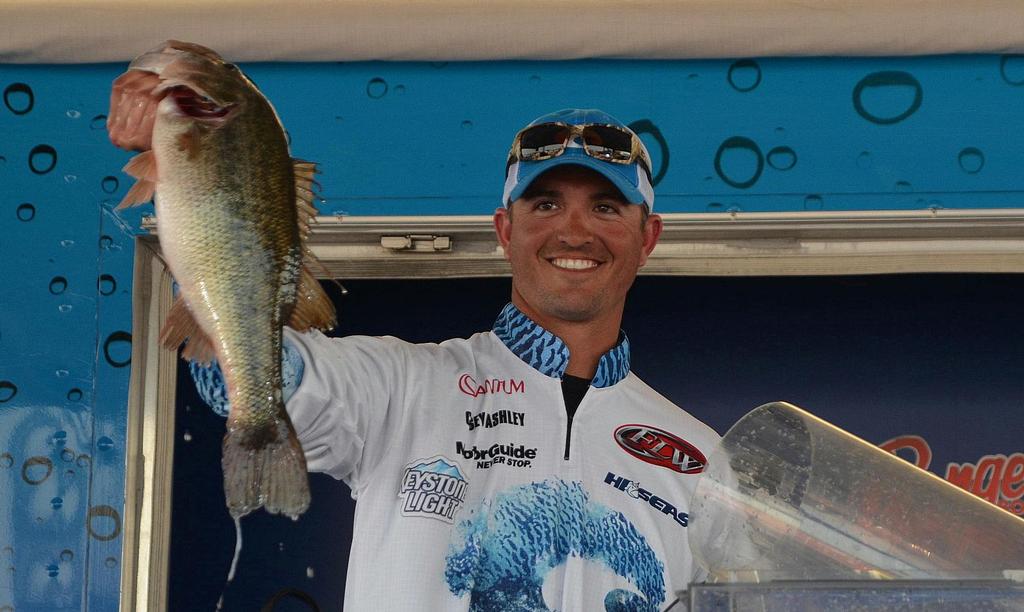 SENECA, S.C. – With the disappointment of the 2008 Bassmaster Classic still fresh in his mind, Casey Ashley crafted a meticulous revenge strategy for the next major tournament held on Lake Hartwell – one that was bulletproof and could withstand cold, wind, rain and fog. In doing so, he had to fish against his shallow-water strengths. Armed with some of the best deep brush piles on the lake, Ashley crushed the second Walmart FLW Tour event of the year from start to finish.

Just as Brent Ehrler dominated out deep in 2012, Ashley focused his time away from the bank – not wanting to compete for the same fish with the likes of Andy Morgan and Randall Tharp. But unlike Ehrler, Ashley fished small, isolated structure and not schools of bass. In many ways, the rollercoaster weather pattern played right into Ashley’s hand as there was no dominant location – the bass were largely in transition.

“I’ve also never fished a tournament on Hartwell with that many boats,” said the 30-year-old Ashley. “I’d look towards the bank and there were boats everywhere. You can do well that way, but I don’t think you can win that way. Those shallow fish just don’t replenish.”

On days one and two, Ashley started on schooling spots – hoping to catch a few bonus bass before the sun came up. He also caught a couple largemouths shallow during the windy opening round, but by the weekend it was all about brush piles. 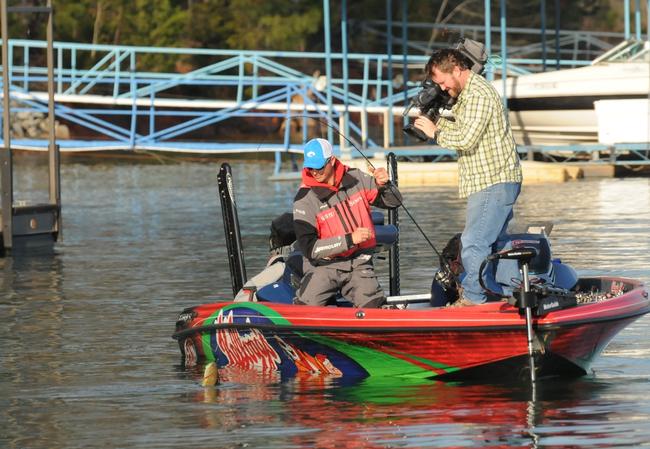 Ashley had a handful of prime piles located on the lake’s clearer south end. They were specific in that they were placed in water 25 to 40 feet and set up over ditches under boat docks. Once he stopped on these areas, Ashley fished incredibly slow, often taking several minutes with each cast. His technique resembled more of a vertical pitch in that he dropped the bait over the crossbars and continued to feed line until hitting bottom.

“I only lost one single fish all week and that was today. And I caught the big one right after that. It was a magical thing. Every move I made this week was the right one.”

There was nothing fancy about Ashley’s tackle. He employed either a 1/2-ounce Shooter Lures jig (green pumpkin) and a Zoom Super Chunk Jr. (green pumpkin) or a shaky head (custom Mountain Man Lures 3/16 or 1/8) with a Zoom finesse worm. His line for the jig was 20-pound Hi-Seas fluorocarbon and he downsized to 10-pound fluoro with the shaky head.

“Most of the big ones came on the jig, but the shaky head was great for filling a limit. I learned a long time ago that gourd green is the best color (for a finesse worm) when the water is cold. The last two days I used watermelon candy, which is better in the sun. Anytime I have a jig in my hand I feel comfortable. And every tournament I’ve won a shaky head has helped me. Those two baits go hand in hand.”

Ashley reiterated that the key to his tournament was knowing the right areas to spend his time. 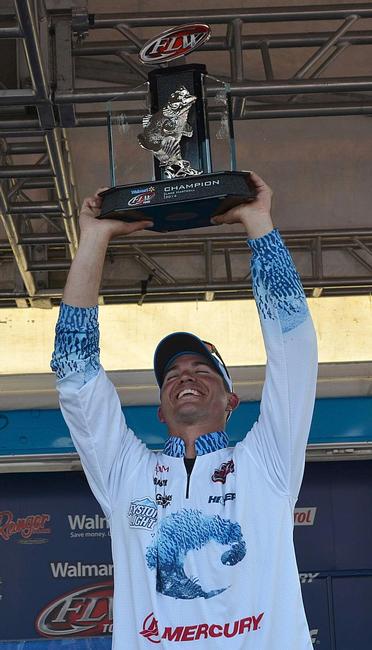 “I need to thank of friend of mine, Roy Stuart. He’s forgotten more about this place than I know. Because of him, I had key brush piles that I knew I was going to catch them on. I knew I could get a bite, not necessarily a big bite, but a bite. Once I got a limit I’d expand a little bit, but I still didn’t want to get too crazy.”

With the exception of day one, Ashley brought mixed bags of largemouths and spotted bass to the scale. On day four he caught 10 bass and his best five weighed 15 pounds, 10 ounces, finishing the week with a four-day total of 68 pounds, 5 ounces. With a margin of victory that was nearly 15 pounds, Ashley’s performance was domination from start to finish.

When the Donalds, S.C., native saw that the 2014 FLW Tour schedule included two trips to the Palmetto state, he said he absolutely had to become a two-tour pro.

“After Okeechobee I could not wait to get back here. I’m not taking away from any major tournament that I’ve won, but it really means a lot to win at home. I’ve got my revenge on Hartwell. Now I need to get to Lake Murray and fish for a half million dollars.”

In typical Andy Morgan fashion, the reigning Angler of the Year started the week in decent shape and continued to steadily climb the leaderboard. With 12 pounds, 4 ounces on day four, Morgan rose to second with a cumulative weight of 53 pounds, 13 ounces. 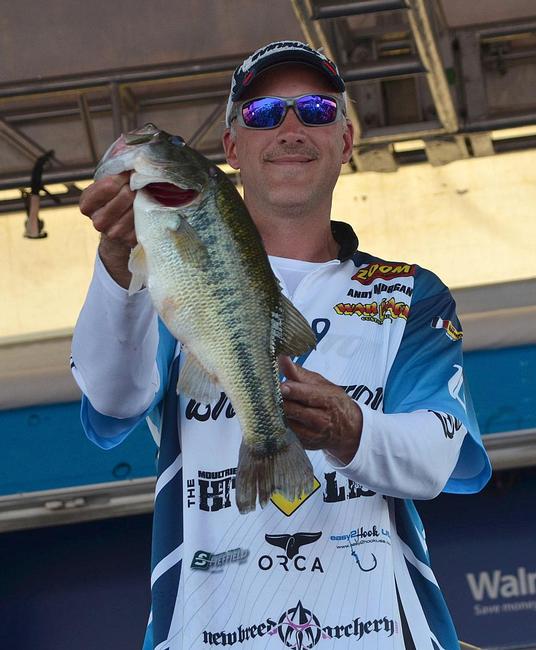 In many ways, this event was similar to Smith Lake last year where Morgan was among the first to adjust as the prespawn weather finally warmed. In both instances, Morgan tried to stay ahead of the fish and catch fresh ones that were just pulling up.

“I thought it would really set up like that,” said Morgan. “It did, but it was never game on like Smith; it was more spotty. Maybe I wasn’t in the proper water. That big one made the day and really saved me.”

Morgan started each day fishing “deeper stuff” in 10 to 20 feet of water with shaky heads, jerkbaits and under spins. Around noon, his largemouth bite would turn on as he crept up to flatter water in 6 foot or less. Instead of forcing the largemouth bite, he would intentionally lay off – hitting it only at peak times with a jig.

“You know it’s been tough anytime you see me with a spinning rod in my hand, but I like the lake. It’s diverse and it spreads out real nice.” 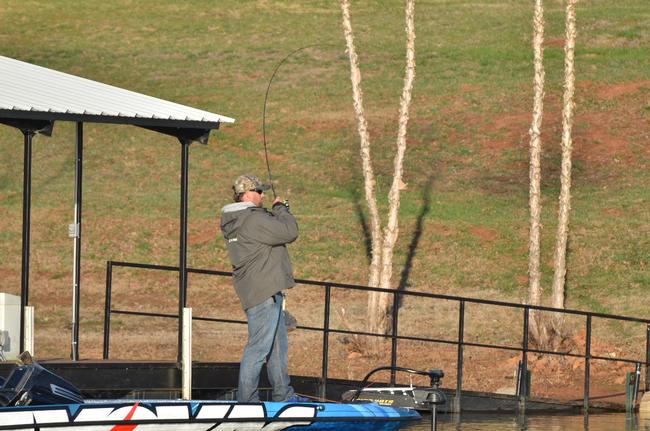 Coming into the Hartwell tournament, Clent Davis figured he’d be fishing 35 or 40 feet deep. But he found an unreal dock bite almost immediately the first day of practice and then continued to expand on it. In practice, it was mostly spotted bass, but during the tournament some healthy largemouths unexpectedly showed up and helped the cause.

While he was still seeing quality fish in the clear water on the lake’s lower end, the bite deteriorated the last two days and Davis broke a few key fish off on boat cables.

“It was one of those days for me,” said the 2012 Rookie of the Year. “I don’t know what I could’ve done different. Eight-pound test and boat cables don’t get along.”

Despite catching only four fish weighing 7 pounds, 8 ounces, Davis only fell one spot, finishing the tournament third with 50 pounds, 9 ounces. The Montevallo, Ala., angler earned $25,000.

“The bass were relating to brush under docks and walkways, but the key was the flatter banks. I threw a shaky head and a swimbait some, but I caught everything on a wacky-rigged Mr. Twister Comida in water 15 feet or less.”

Davis used an O-ring and his color of choice on the soft stickbait was green pumpkin. 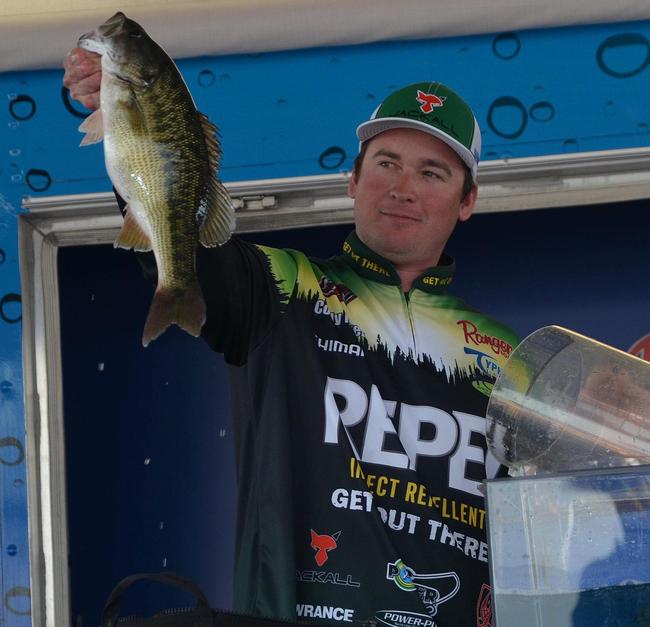 “The streak is over,” said the Repel pro. “But at 1 p.m. I caught my first fish so four really isn’t that bad.”

Meyer’s pattern was productive, but it did not produce numbers. On days one and two he caught six keepers. On day three he caught five and today he lost a few fish as he failed to boat No. 5.

“I couldn’t catch them like I was. They pulled up under docks today with the sun. You could actually see them swimming around there, but it was so hard to get them to bite.”

Meyer’s main pattern was drop-shotting brush in water as deep as 40 feet. Today he switched at noon to depths of 15 to 20 feet under the docks, with the fish suspending in the first 5 or 6 feet.

Earlier in the week Meyer had 10 really productive piles on the lower end of the lake, some located on red-clay points (which heat up quicker) and others under docks. His bait of choice on the drop-shot was a wacky-rigged Jackall Flick Shake worm. Occasionally, he mixed in a G Money jig on his deepest water.

“If you would have told me I would make the top 10 in each of the first two tournaments I would have said you’re crazy. I couldn’t be happier.” 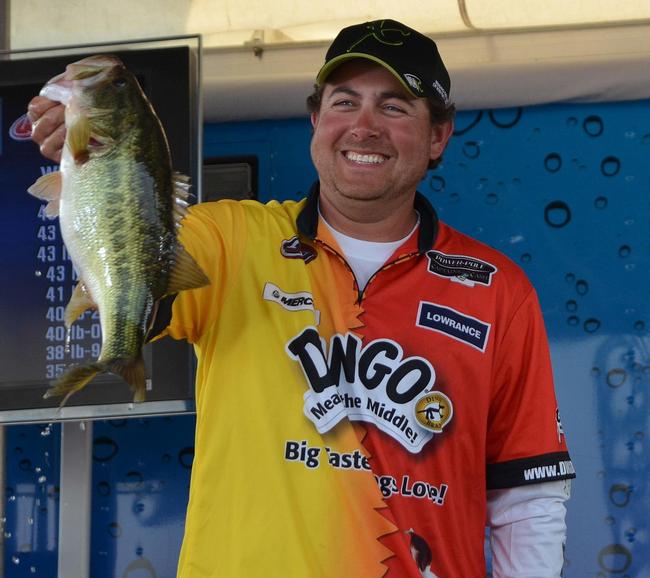 John Cox started the day in sixth place and finished fifth after catching a 13-pound, 6-ounce limit. Anchoring that limit was a fat prespawn largemouth in the 5-pound class. The Debary, Fla., pro finished the tournament with a total weight of 48 pounds, 14 ounces.

“I started the week mixing up some baits, but I caught pretty much everything on a trap,” said Cox.

The 2011 Red River champion spent most of his time in nearby Seneca Creek. Today, he started in a pocket down by the dam. With only one bass at 10 a.m., he ran back up and finished the day once again in Seneca.

“When that big one bit, I thought it was a grass carp. I was mad that he was going to take my trap.”

Cox used both a 1/2-ounce and a 3/4-ounce Excalibur Xr50 lipless crankbait in foxy shad color.

“I was yo-yoing the trap, ripping it through the stick-ups and popping it off like it was grass. I don’t know why it didn’t work the third day – maybe I wasn’t working the bait right. I think it had more to do with them being there. They were just trickling back at the end of the day and that’s when it got good.”

“Okeechobee was a reality check. I was wondering if I could even still fish, so I’m super excited about this tournament.”

Rounding out the top 10 pros at the FLW Tour event on Lake Hartwell:

The next event of the season, stop No. 3 on the FLW Tour, takes place March 27-30 on the Sam Rayburn Reservoir in Lufkin, Texas.