Dudley in the Driver’s Seat 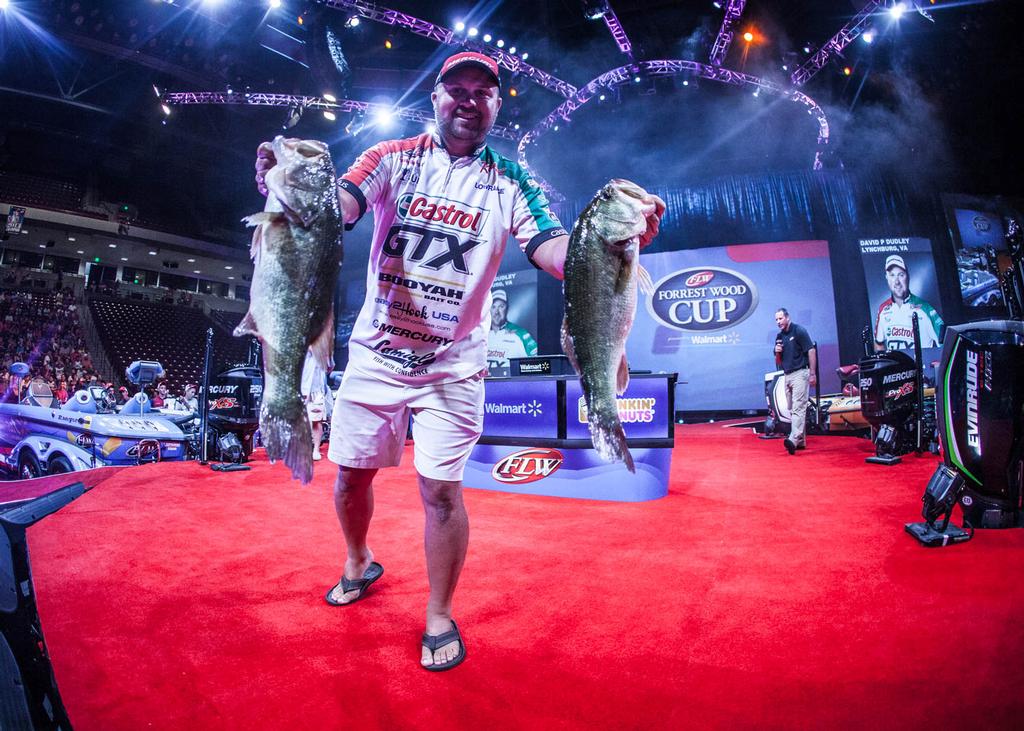 Castrol pro David Dudley jumped into the early lead at the 2014 Forrest Wood Cup and is in the driver's seat to become the first pro to ever with the Cup twice. Photo by Brian Lindberg. Angler: David Dudley.
August 14, 2014 • David A. Brown • Tackle Warehouse Pro Circuit

COLUMBIA, S.C. – In the field of 45 pros hoping to raise the trophy at the Forrest Wood Cup presented by Walmart and hosted by Capital City/Lake Murray Country, five have enjoyed that magical moment before. After a strong day-one performance, Castrol pro David Dudley is looking a lot like a man on a mission for No. 2.

Weighing in a first-round limit of 17 pounds, 14 ounces, Dudley took an early lead and held off all challengers to finish atop the field by a margin of 3-5.

As expected, definitive patterns remained elusive. Very few anglers stuck exclusively with shallow or deep patterns, and Dudley was not among them.

“I went deep and shallow. I think everybody is doing that. I’m mixing it up,” he says. “I have no idea where the next bite is coming from. I’m just flying by the seat of my pants and trying to stay focused.”

Dudley, whose biggest fish went about 4 1/4 pounds, explained that dialing in the timing of his shallow and deep efforts was a work in progress.

“That’s kind of what I was checking today,” he says. “Even though this was a tournament day, today was kind of a practice day. I spent today trying to figure out when I do need to stay shallow and when I need to stay deep.

“I went deep during a certain time of the day. I didn’t get bit, so then I went shallow and got bit,” he continues. “It was a process of trying to figure out the timing. I don’t have it down pat, but today I learned a lot about what I need to do more of.”

Dudley didn’t reveal his specific baits, but he noted that he needed three different lures to secure his limit.

He hit approximately 40 spots and nabbed seven keepers. Offshore, Dudley fished as deep as 30 feet, and on the bank, he targeted a variety of shallow cover.

“These bass aren’t holding on any particular cover,” he explains. “They’re just kind of roaming around. You just hope to collide with them. It may be in between docks. It may be on the dock. It may be some other place. You’re just going shallow trying to find them.”

Dudley says that while he doesn’t plan to return to any of his shallow spots on day two, he will revisit some of his deep structure. He’s hoping to expand on his day-one success – a satisfying way to open the tournament.

“In the Forrest Wood Cup, you need to come out strong,” Dudley says. “If you look at the history of this event, everybody who’s won always has one exceptional day.”

Of his potential to win another title, Dudley appears poised to do whatever it takes: “I’ve always said, ‘Never be satisfied.’ I’ve won one, but if you keep that attitude of never be satisfied, you’re always going to be climbing the mountain.” 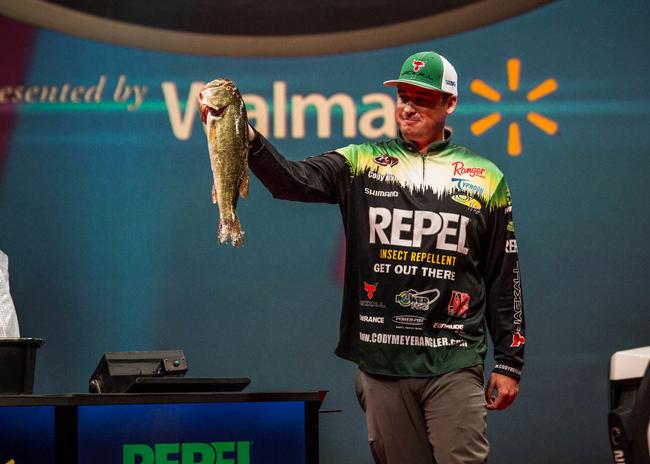 Auburn, Calif., pro Cody Meyer, runner-up for the 2014 Angler of the Year title, recently stated that because he lost no key fish during the season, he had no regrets about missing the season’s points championship. Today, he echoed that thought with regards to his second-place weight of 14 pounds, 9 ounces.

“I’m definitely happy. I got about five bites all day,” says the Repel pro. “I never missed one and capitalized on everything that bit.”

Although his day turned out well, Meyer says his bites were hard to come by – and late to begin.

“I thought I could catch two or three in the morning that would be decent fish, but I got my first bite at about 10:30 and then my second bite at 1,” he says. “It was a scramble.”

Meyer says that he invested a lot of time running from spot to spot in search of a bite. One of his brush piles yielded two bass – including his largest, a 5-pounder.

“It was a rodeo in there,” he says. “The fish jumped and went crazy. It got hung in the brush pile and then came out. And then on the next cast, I caught another one. It was just a lucky day.” 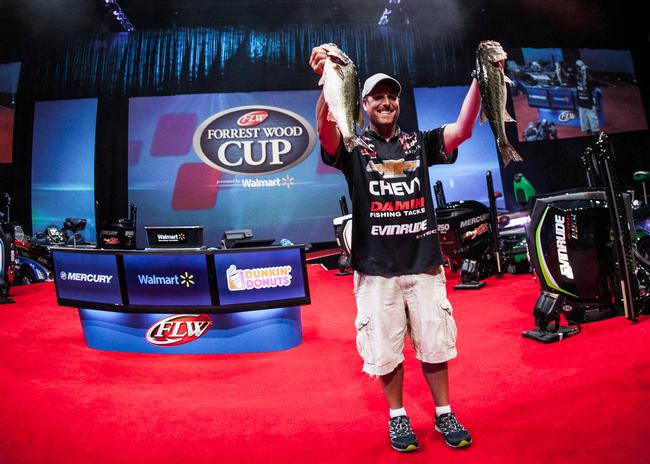 Tying for second with 14 pounds, 9 ounces, Chevy pro Bryan Thrift of Shelby, N.C., says he caught seven keepers all day. Not bad, considering the tough post-frontal conditions. Yet, it wasn’t so much the quantity as the timing that caused a stressful morning.

“I knew it was going to be tough, and I needed to catch them early, but on my first three stops I never caught a keeper,” Thrift says. “I finally caught a keeper, and then on the next stop I made, I finished out my limit. I started getting worried when I only had one by about 9 o’clock because it seems like the bite dies around 10:30 or 11 every day.”

Thrift says that while he checked a few offshore spots, his was mostly a shallow deal. One particular reaction bait produced all of his bites, which came from two spots.

For day two, Thrift says he’ll spend at least the first few hours fishing areas that are similar to where he caught his day-one fish.

“I have some stuff that I didn’t fish today where hopefully I can catch some tomorrow,” he adds. 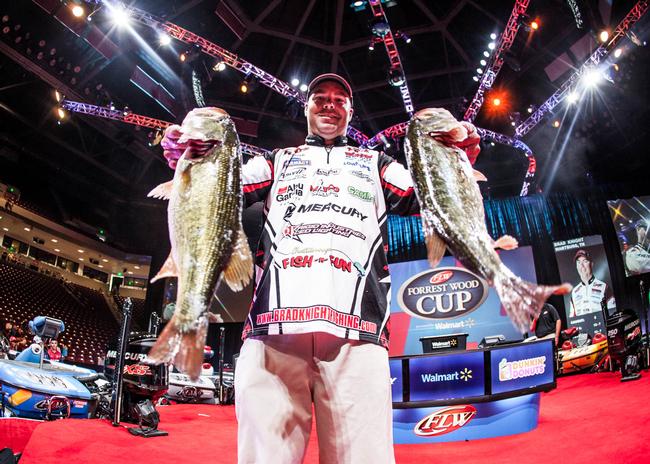 Brad Knight of Wartburg, Tenn., sacked up a fourth-place limit that weighed 13 pounds, 7 ounces. A subtle microcosm of Knight’s early tournament success was a strong start to his day-one action.

“I had a tough practice and only got a couple of bites, so getting started early was going to be the key,” Knight says. “I was fortunate enough on my first spot to catch a good one and get the ball rolling, then momentum just carried me through the rest of the day.”

Knight says he started his day by burning the bank and fishing moving baits. After about 9 a.m., increasing sunlight slowed the shallow bite and prompted him to move offshore and fish finesse baits.

Although his morning proved more productive, Knight says some afternoon activity cued him in on a potentially productive pattern that he’ll delve into tomorrow.

“I had a good opportunity to upgrade my catch significantly, but it just didn’t work out,” Knight says. “But every day’s a new day, and you never know what to expect. I feel good about it, and I’m looking forward to going back out tomorrow.” 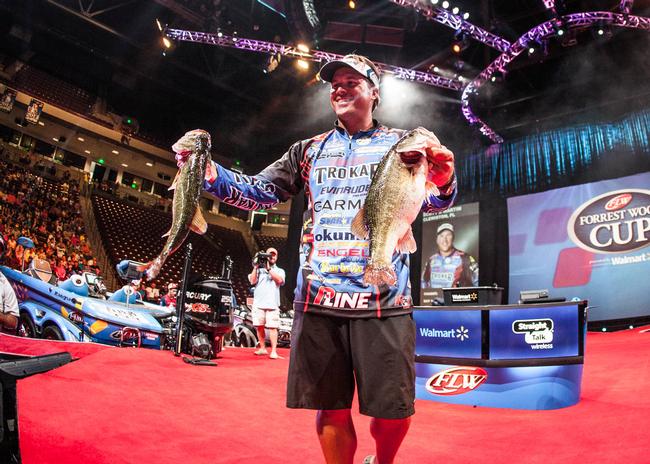 Like Dudley, Florida’s Scott Martin is also seeking a second Forrest Wood Cup to pair with his 2011 title. In fifth place, he trails the leader by 4 pounds, 8 ounces with a 13-6 limit.

Martin says he secured his limit by 9 o’clock and then spent the rest of the day essentially scouting for day two.

“I was really blessed to get a limit early today, and I had a pretty good bag,” Martin says. “I started thinking, ‘Do I want to start running a bunch of new stuff and try to pick up a bonus fish here and there and try to learn something for the rest of the event?’ And that’s kind of what I did.

“It was hard to do because I was passing up places where I thought I could catch one and maybe cull up a little bit,” he continues. “But I knew that a 2 1/2- to 3-pounder tomorrow will be a lot more important than [culling up by] half a pound today.”

Martin, who says he caught one big fish each day of practice, culled up once today with a 3-pounder on one of the new spots he found.

In the Forrest Wood Cup, 45 pros and co-anglers from the Walmart FLW Tour, Rayovac FLW Series, Walmart Bass Fishing League, FLW College Fishing and The Bass Federation are randomly paired each day, with pros supplying the boat, controlling boat movement and competing against other pros. Co-anglers fish from the back deck against other co-anglers. The full field competes in the two-day opening round. After day two, a co-angler champion is crowned and the pro field is pared to the top 20. After Saturday's weigh-in, the pro field is cut to the top 10. A pro champ is crowned on Sunday, with a $500,000 prize paid to the winner.

In addition to FLW Live, FLWOutdoors.com and ForrestWoodCup.com offer real-time updates from the water.

Check out all that FLW has in store at the FLW Expo, including a barbecue contest, free Rodney Atkins concert and a jam-packed tackle show at ForrestWoodCup.com.