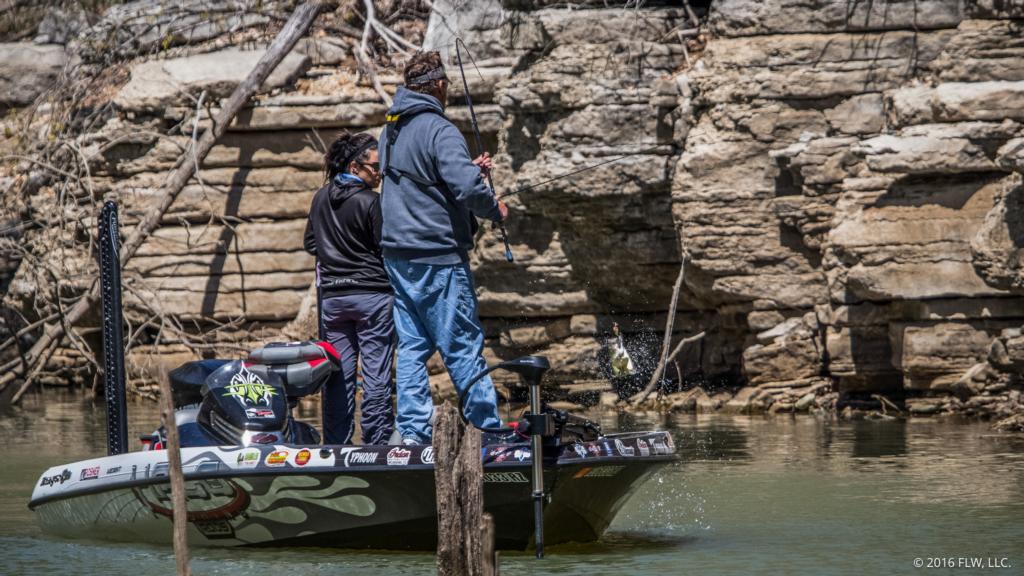 Weigh-in from day one of the Walmart FLW Tour presented by Jack Link’s starts up live at 3 p.m. CT sharp and it looks like we’re headed for a tight one. Right now, JT Kenney is the leader in the house, but there are likely plenty of surprises in store. With that being the case, this is a weigh-in you’ll want to watch.

Catching a big one is the No. 1 priority for many of the pros now. That means different things depending on the angler, but for Stetson Blaylock and Buddy Gross, that means heading up into War Eagle and looking for a green one. The upper reaches of that creek have always been popular largemouth areas, and for Gross and Blaylock, who each have about 13 pounds, they’ll hopefully hold a big girl or two in the last few hours.

Day one is starting to wind down a little (weigh-in starts at 3 p.m.) and we’ve finally got an update from Matt Arey. He says he’s got about 13 pounds now, and out reporter just watched him cull up to that total with a bedding fish that Jacob Wheeler was working on earlier. James Watson and Stetson Blaylock also have about 13, and it certainly seems like a top tier is emerging as the day wears on.

All that aside, JT Kenney still has the unofficial lead with 16 pounds. He’s upgraded slightly since the morning, but so far is missing that second big bite to really put him over the top.

On the down side of things, Andy Morgan only has three in the boat at moment, Josh Weaver has a limit of dinks and Bryan Thrift has just four for “4” pounds.

Noon: Not losing it on day one

In the past, catching a really big bag on Beaver Lake was almost impossible without an umbrella rig. That might not be the case this year, but staying steady is still going to be important. That’s why the slew of anglers working on limits that approach 10 pounds is just as key to set up day two as the few like Capt. Blake Smith, David Dudley and JT Kenney who are really catching. Winning and getting paid on Beaver is amount consistency, a trademark that Matt Arey has embodied the last few years.

As for Arey, he and a few other notables are still missing. Andy Morgan hasn’t been found yet (surprise) and Wesley Strader, Brad Knight, Chris Johnston and some others have proven elusive.

An angler we have found is Zack Birge. Based on practice and his momentum from Grand Lake many expected him to be a contender this week. So far, that isn’t quiet materializing – while he does have a 4-pounder, there’s only one other small fish in the box with it.

As usual, Beaver Lake is fishing all over the board on day one. Though there is a big contingent of pros sight-fishing, plenty are mixing it up as well. Capt. Blake Smith is up the river in the dirty water with a few on beds and more with a pattern that he’s keeping to himself at the moment. JT Kenney, Dan Morehead and Clark Wendlandt have been working crankbaits for their fish in the middle of the lake and there’s still a contingent of pros fishing deep for smallmouths in the lower end.

JT Kenney is the first pro across the 15-pound mark. He thinks he might have up to 16 pounds in the ‘well but has only caught seven fish on the day. Luckily for him, one is a 5-pounder and the rest have been the right size too. Unlike Dudley, who has had a great morning and only a couple pounds back weight wise, Kenney is cranking and not looking for his fish.

Down by the dam, Dudley is setting the pace with a mix of sight-fishing and just fishing. He’s got a limit with a few solid smallmouth and a largemouth that goes about 5 pounds. That’ll put him close to the low teens

Jacob Wheeler and James Watson are both up around or past the 11-pound mark as well. Up the river, Buddy Gross is also doing well. He’s got about 10 pounds and has caught a pile of fish so far – only problem is a lot of them are the same size.

Though we’re still working on the other part of #TeamCanada, Cory Johnston has been found and has three for about 6 pounds so far.

The weather just keeps getting better as the morning goes on. All around the lake, the sun is starting to crack through the clouds more earnestly and there’s a steady (though light) breeze that has the water decently ruffled. Down at the dam, wind is still pretty slight making for nearly perfect sight-fishing conditions. As for the temperature, it is perfectly cool and comfortable having risen into the high 50s since takeoff.

Beaver Lake is showing out so far this morning. We don’t have any massive catches to report, but there sure are plenty of ‘em.

On no particular order, here are some updates. Charlie Weyer has two, one for about 2 pounds and one for about 4 pounds. Jeff Gustafson has three spotted bass. James Watson has four with two that are solidly 2+. Brian Latimer has a limit of littles. Luke Dunkin has a pair of keeper spots. Randy Blaukat has three for about 7 pounds.

Though our otw reporters left him early, per Facebook it appears that David Dudley is having a day. He’s got his limit now and it is capped off by a stud largemouth. If there’s any leader at the moment, Dudley is probably the man. 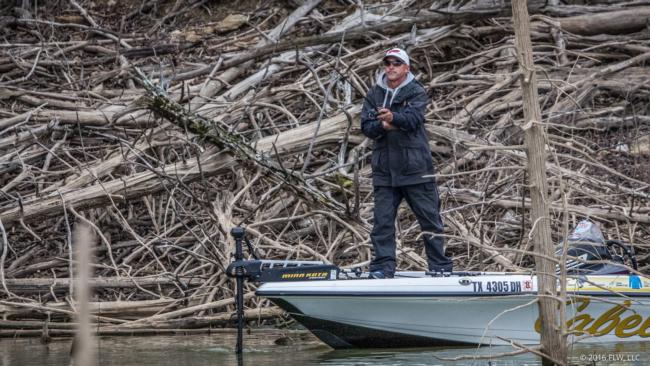 Fishing in the mid-lake area, Clark Wendlandt is the first we know to box a limit. It is just shy of 10 pounds, so not a winner yet, but for sure a good start for the original Mr. Beaver Lake. He’s tossing a crankbait for his and moving pretty quick along the bank.

The smallmouth bite appears to be very strong this time around. So strong, that it has drawn Brandon McMillan down to the dam to join in. Down there, he’s got three smallmouth in the box and just might be using a spinning rod.

8:10 a.m.: Gagliardi is going to work on the smallmouth

Down by the dam, Anthony Gagliardi has also gotten off to a good start, putting a 3-pound smallie in the boat and following it with another that was close in size in short order.

For many of the smallmouth guys, and for sure Dudley and Gagliardi, the fish they are catching are coming off beds that they marked in practice and are blind-fishing for from a ways back.

Up past the bridge, Braxton Setzer has one “nice one” in the box so far and is reporting that the water there has cleared up considerably since Tuesday. Also on the board is Clark Wendlandt, who has four for about 7 pounds.

Things are rolling pretty good now on day one. Down by the dam, David Dudley has a second keeper smallie in the box, but there’s substantial action going on in Prairie Creek. Besides Blaylock, Jason Lambert has three for about 6 pounds and Darrell Davis started his day with a 4-pounder and one that is pushing 3 pounds.

Up past the bridge, local favorite Travis Fox just broke the ice with a 2 3/4 pound fish – though he’d probably love to cull it, that kind of fish isn’t a deal breaker on Beaver. 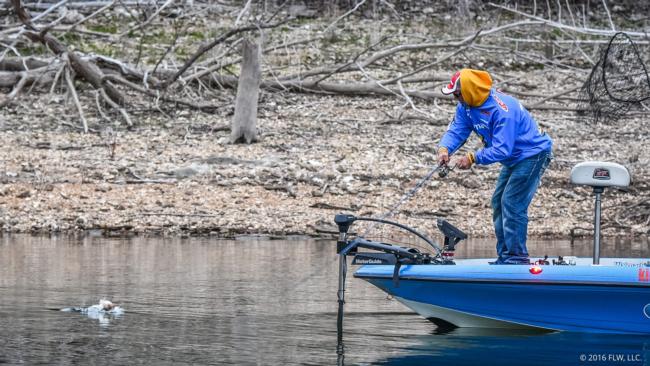 Fishing down by the dam, David Dudley has the first reported catch – a keeper smallmouth. Due to the nature of the lake this year, the clear water is very concentrated by the dam and that’s about the only place it is possible to sight-fish. The main lake and the last few creeks by the dam are also very popular smallmouth areas, so that area ought to see a lot of action between those combined factions of anglers.

Also on the board are Pete Ponds and Brandon Cobb. Both are fishing a little further up the lake in the stained water. As for fish, Ponds has two for about 4 pounds and Cobb has one decent keeper. Despite all that, the leader of the pack so far is Stetson Blaylock, who caught a 4-pounder on his fifth cast.

Day one of the Walmart FLW Tour presented by Jack Link’s on Beaver Lake took off under conditions that are almost as perfect as possible. Though some anglers would no doubt prefer wind and rain to stimulate the bite, the weather is set to start cool and rapidly warm into the low 70s with light winds and plenty of sun. That should be a good setup for the pros rushing down to the clear water at the lower end of the lake to look for bedding bass. As for the pros looking to go to work with jigs and crankbaits in the more stained midsection and upper part of the lake, the weather might not be ideal, but the bass should still be eating. All the reports from practice and from local tournaments before the event have Beaver fishing as well as it ever has, and a little nice weather isn’t likely to derail that.

For now, it’s go time and the fishing should be great! 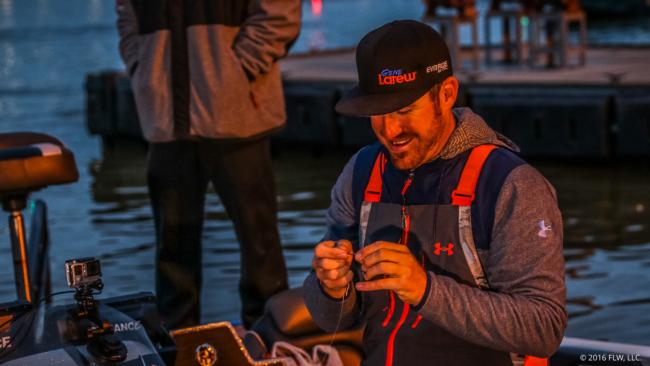