Gross Extends his Lead on Pickwick

Day one leader cracks another 20+ on day two (updated) 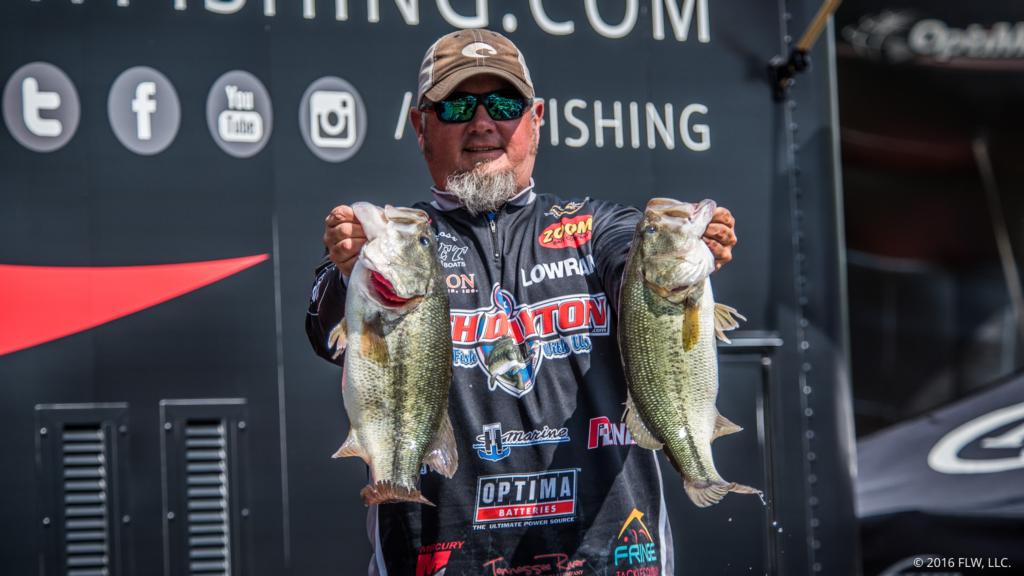 Day two of the Walmart FLW Tour event presented by Quaker State and hosted by Florence/Lauderdale Tourism on Pickwick Lake was much calmer and tamer than day one. The wind waned and there were no lock issues for those venturing to Wilson. Given the calmer conditions, many thought more big bags would be brought to the scales since pros could actually fish in the main drag of both lakes. But on day two, only three limits crossed the 20-pound mark as many of Pickwick’s best sticks were left scratching their heads as to why more fish are not stacking up out on the ledges for the post-spawn feedbag.

One of those 20-plus limits belonged to day-one leader Buddy Gross of Ringgold, Ga., who weighed 21 pounds, 3 ounces to extend his advantage over the rest of the field by nearly 9 pounds.

Though Gross is an FLW Tour rookie, he has had an experienced shoulder to lean on this week in the form of his roommate, well-known Tennessee River ace Michael Neal, who is always cool under pressure. Neal has not only helped Gross stay focused this week, but he also tipped Gross off to the lure that has been Gross’ go-to bait thus far. The real irony of this whole scenario, however, is that Neal is in second place and will be gunning for his own roommate going into the weekend. 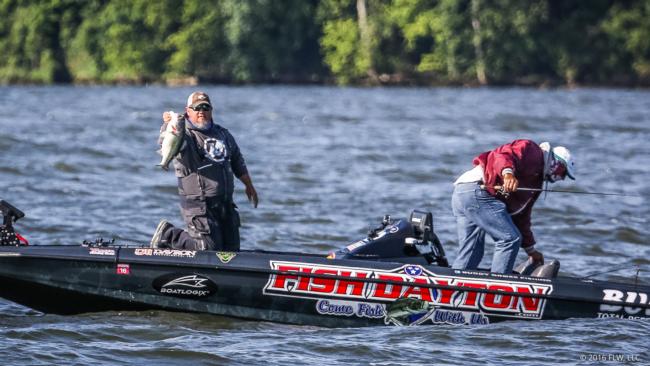 “Michael is a great guy and he has helped me out a lot,” Gross says. “But I can guarantee you this, he won’t be cutting me any slack out there on the water the next two days.”

Both Neal and Gross have requested that “the lure” be kept under wraps another day or two, but Gross did reveal it’s a single-hook bait that has done most his damage over the last two days.

Gross is applying the lure primarily along a ½-mile ridge along the river. The ridge tops out in 8 to 10 feet of water and is littered with shell bars and grass clumps.

“When I found these fish in practice, they were up in the thicker grass up on the flat,” Gross says. “But I have not gotten a bite up there since. The fish have moved out to the more scattered stuff out along the bar. I think most of the fish coming out of the flat are post-spawn and headed for the river.”

Gross’ prime time for his fish catching is first thing in the morning when the shad are spawning along the ridge. Yesterday, he scored four big bass in the opening minutes of the event. Today he caught two in the morning flurry. On both days he never caught another keeper after 11 a.m.

“I’m afraid that shad spawn is tailing off so I’ve got to find something else to do in the afternoon,” Gross says. “I only caught six fish there on day one and seven fish there today. If it dries up I’m in trouble.”

One factor that is in Gross’ favor is that he has had very little company in his area over the last two days, a rarity in ledge events on the TVA this time of year.