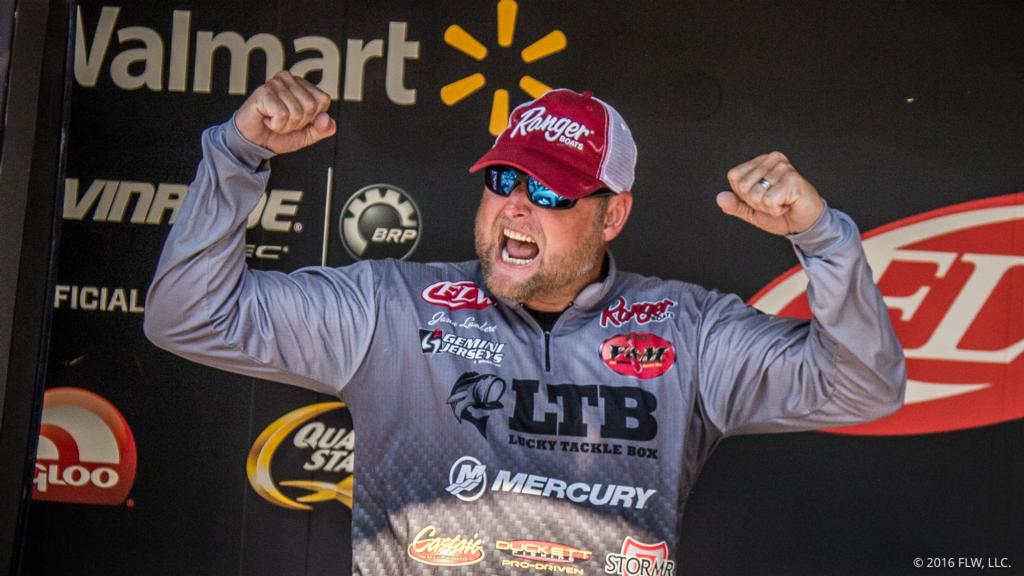 Jason Lambert had a small chip on his shoulder. That chip was named Kentucky Lake.

The grudge match with Kentucky Lake started back in 2012 when Lambert finished third in a Costa FLW Series. At the time, he brushed it off. After all, a third place finish was a solid finish for a guy who was just starting to break into the big leagues of bass fishing.

However, things got a bit more personal with Lambert and Kentucky Lake in 2014 when he finished second in the Costa FLW Series held there.

And the chip really grew in size at the FLW Tour event on Kentucky Lake in 2014 where, in his rookie FLW Tour season, he finished runner-up again, missing his first Tour win by 1 pound, 2 ounces.

What bothered Lambert most about his two previous runner-up finishes was that he brought in his biggest limits of those tournaments on the final day and still didn’t win on Kentucky Lake.

This week, Lambert settled his score with Kentucky Lake in a big way, leaving no doubt as to who was the best in the Walmart FLW Tour on Kentucky Lake presented by Mercury and hosted by the Kentucky Lake Convention & Visitors Bureau. Each day Lambert’s weights increased with limits of 18-9, 24-4 and 25-5 the first three days. And again, he saved his best for last, but this time brought the sledge hammer on the final day, weighing in a stunning 29 pounds to dominate the event with a four-day total of 97 pounds, 2 ounces and smashing the previous FLW Tour total weight record for a Kentucky Lake event, making his first Tour win extra sweet. 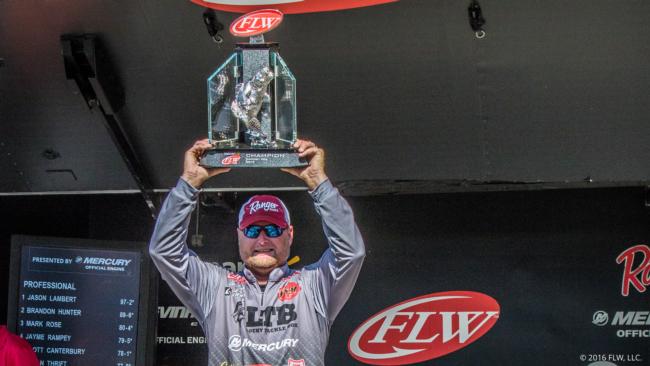 “You don’t get many of those days where everything goes perfectly,” Lambert says. “And today was just one of those days. This lake has been a thorn in my side for a few years now, so this is some sweet redemption.”

Despite the competition trying to run him down on the final day with multiple 20-pound plus limits, no one even came close to touching Lambert who reveled in a nearly 8-pound margin of victory.

All week Lambert stuck to what he referred to as his “outlier pattern,” graphing around the outside fringes of traditional megaschool areas to find smaller pods of fish that had jettisoned from the main herd, which was constantly being bombarded by fishing pressure. In Lambert’s mind, the smaller groups of fish, which had left the community school, would “freshen up faster,” making them easier to catch. In addition, those smaller packs seemed to be made up of bigger fish.

“I’d just idle and idle and idle some 75 to 150 yards away from the primary areas,” Lambert says. “And if I saw five or six dots pop up on my screen, I’d immediately stop and fish. Those were the outliers and they were fatter and fresher.”

Proof of Lambert’s outlier theory was the number of times he would connect with a big bass moments after seeing the pod of dots on his electronics. It’s not like Lambert would maul through dozens and dozens of fish. Instead, it was usually one or two big fish from a pod, then they would move again.

“These fish were constantly on the move, which is why I idled so much,” Lambert says. “The primary schools would stay put better, but the fish were smaller and wouldn’t hardly bite anyway. So the first three days I spent my time chasing those outliers around on the outside.” 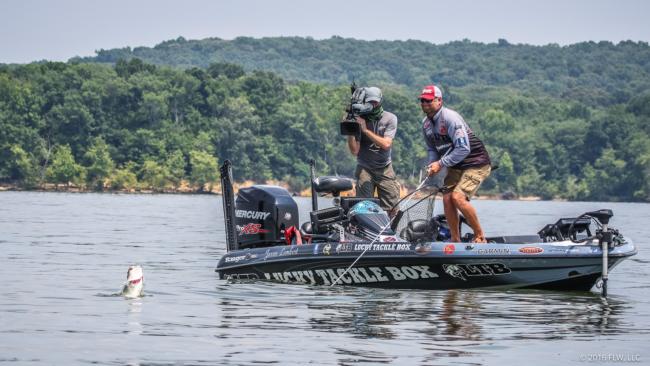 “That’s exactly what happened here,” Lambert says. “During the week, when the pressure was the heaviest, the big schools were beatdown and busted up. But today, with so few boats on the water fishing, some of the big schools started to form back up again. Today was the first day I caught bass from what I felt was truly a megaschool – there wasn’t a boat on it. But the first three days, I couldn’t catch a fish from that school. I had to fish 100 yards from it to get a bite.” 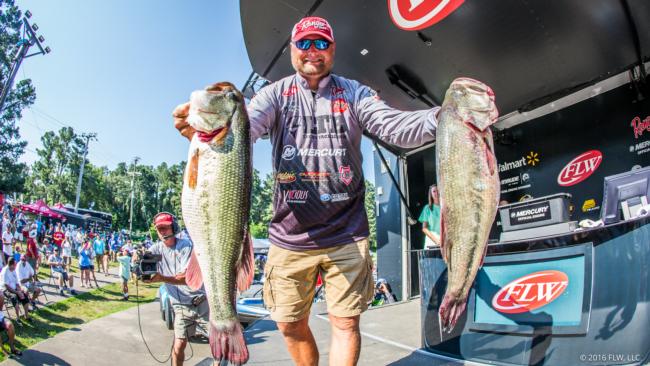 Another big component to Lambert’s success was his lure: a 1-ounce scrounger head teamed with a 7-inch Castaic Jerky J (green shad) fished on 17-pound test Vicious Pro Elite Fluorocarbon. The key was to let the lure sink all the way to the bottom in 18 to 23 feet of water and then literally crawl it back along the bottom. The first two days, he followed the Jerky J up with a Castaic Heavy Metal Flutter Spoon, which caught a few weigh fish as well. But over the last two days, Lambert stuck just with the scrounger/Jerky J combo due to its single hook, reducing the risk of lost fish.

“I have fished that lure for a few years, but I really developed the right cadence with it here this week,” Lambert says. “Those big ones wanted it crawled along the bottom. Once I got the speed and rhythm of it dialed in, that was the deal. If I idled over them and saw them set up right on my screen, I had every bit of confidence that the Jerky J would catch them.”

And catch them he did, leaving his name in the FLW Tour record books, right next to the name Kentucky Lake.