Calling it at the wire 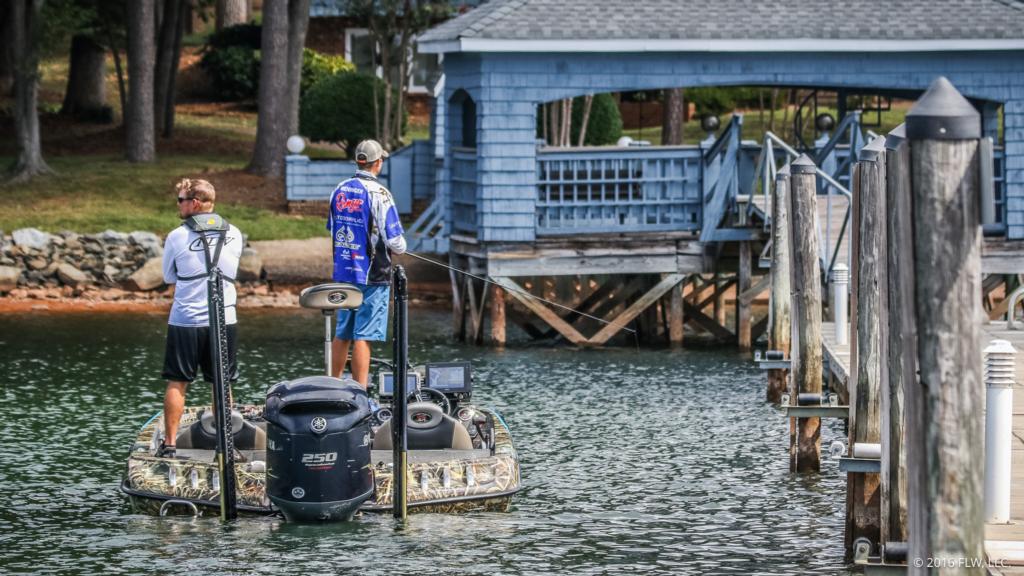 With an hour to go until weigh-in, it’s time for someone to catch Thrift or for the man himself to ice it with a kicker. These last few days, it’s been common for someone to catch a big fish late, so a last-minute change in the leaderboard would be no surprise. Regardless, we’re in for a very close weigh-in this afternoon.

With a Forrest Wood Cup berth on the line, plus over $60,000, if you can make it down to Blythe Landing Park to see it in person you’ll want to. If not, check back to flwfishing.com at 3 p.m. ET to see the drama unfold. 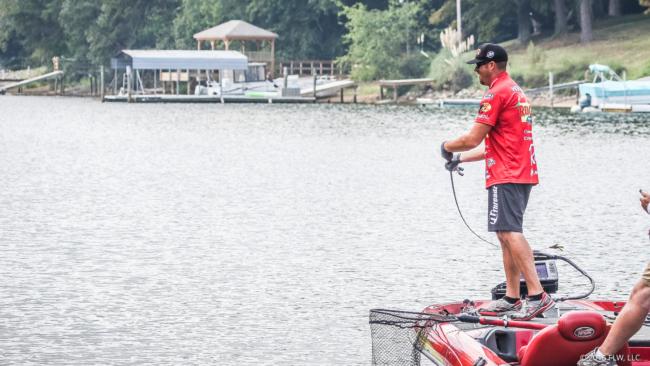 Todd Hollowell has had a transcendent day, and if he can find a little more magic he might be able to make a run at the lead. Like a lot of guys, he’s concentrating around docks, but Hollowell’s primary targets are a little shallower than normal (the center of some of the creeks is only 4 feet deep). His baits are primarily a Whopper Plopper for between the docks, and a jig for under them. He’s running new water, and he says he’s tying to channel his inner Andy Morgan, which seems like a good call if he can actually do that. 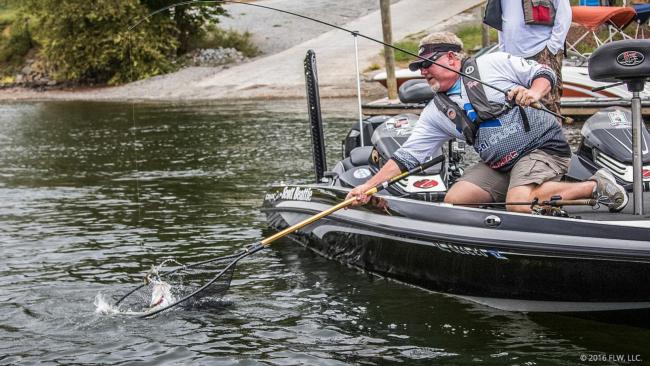 With just about an hour and a half to go, here’s how things stand unofficially. For the full unofficial list click here.

A hazy, cool morning on Norman is rapidly turning into a hazy, lazy summer day on Norman. The churn of pleasure boaters is starting to get out in full force now and there is a light breeze beginning to build as well. With the conditions changing, it may be time for some of the anglers to change as well. This morning, all the typical Norman techniques seem to have worked for varying anglers, but the bite was markedly less consistent than on previous days. Now, as more normal and sunny conditions play, some pros might be able to run their regular patterns with more success.

Jason Meninger is rapidly turning into a man to watch. He keeps on catching, now tossing a shaky head around docks, and he’s got over 12 pounds now. By our estimate, he’s in third place and about a pound behind Beattie and 3 pounds behind Thrift.

Rounding out some of the other players, David Dudley has a limit for about 10 pounds now, Luke Dunkin and Tracy Adams have limited for about 9 pounds and Shane LeHew has a limit that goes around 6 pounds. Also, Billy Shelton has worked his way up to about nine pounds. 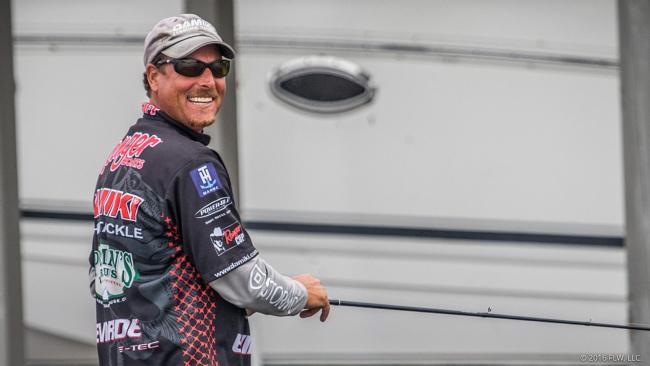 Bryan thrift spent all morning tossing topwater up shallow, but he’s changed up now. Running up the river a bit, he’s now fishing a nothing little spot in the mouth of a creek. Throwing a crankbait, a swimbait and a jig, he’s caught four largemouths off it and culled up by a few ounces. Apparently, it’s a known spot for big fish, so he might be ready to grind out a winning kicker.

One other note is that Thrift has had a fair number of followers. Since takeoff, he’s had at least six local boats trailing him and watching the master at work.

12:05 p.m.: Hollowell is taking advantage of the weather

With light winds and a bunch of clouds and haze, today hasn’t really been as forecasted. For Todd Hollowell, that’s just dandy. Working a topwater almost exclusively, he just boated a 3-pounder to fill a limit worth more than 10 pounds and perhaps 11 pounds. By our count, he’s now up into the 30-pound range and is really just one more good fish away from a virtual tie with either Scott Beattie or Bryan Thrift.

We knew it was anyone’s game today on Norman, but nobody expected a 15th to first rise. With how Jason Meninger and Hollowell have fished so far, we could be on the verge.

Bryan Thrift and Scott Beattie are still battling for the lead, there’s some decent catching going on behind them as well. The best of the rest is Jason Meninger, who has now culled once and has about 10 pounds. Billy Shelton and Michael Neal also have limits now, and are both hovering around the 30-pound mark for their totals – just enough to be one big bite behind Beattie and Thrift.

Scott Canterbury has made a short move, but he’s still waiting on his fifth keeper. Once he get’s that we’ll have a better idea of his chances at getting back in the mix. 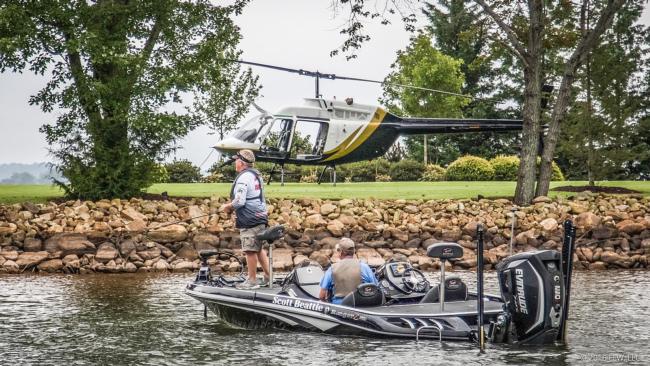 Scott Beattie put his fifth keeper in the livewell and is now just a couple of pounds behind Bryan Thrift. Currently, he’s moved to a spot he’s been saving the whole tournament – an offshore rock pile in about 18 feet of water. He’s dragging a worm over it very slowly, and has had a pair of huge hooksets with nothing to show so far.

In practice, Bryan Thrift figured that there wasn’t enough juice up the river on Norman to sustain someone for three days. Even Michael Neal, who was pretty committed to it, was worried about the pressure. Now, Neal, John Cox and Scott Canterbury have all found themselves fishing together up the river again. Canterbury was the first to arrive today, and the others essentially fished their way up.

Fishing lower down, Neal was getting a lot of follows, and Canterbury says he’s “seen the winning fish twice” when a bass followed his fluke in. But, with the current shut off again now, getting the fish to bite seems to be a major challenge.

We’ll see if there’s enough up there below the Lookout Shoals Dam for someone to get a big one in and make a run at Thrift. 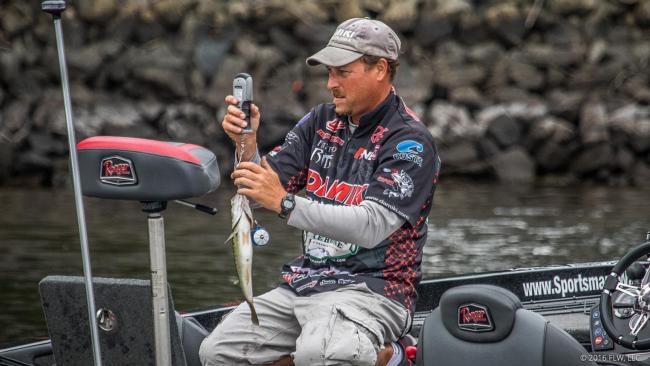 While some pros are struggling to start or fill a limit, Bryan Thrift is cruising today. After changing over to a buzzbait, he’s getting a lot more bites and has culled twice to get to more than 10 pounds. Now, about all he needs is one kicker bite to ice his second Tour win on Norman and finish an impressive final-day charge.

The pros around him are stout, and might well make an argument for the win before the end, but right now, it’s been all Thrift all the time this morning.

Jason Meninger started the day in 18th, but he’s move all the way up to fourth so far (unofficially) with the second limit of the morning. Throwing a topwater and a drop-shot rig, Meninger has caught all decent fish, but not real kicker yet. On a slightly slow morning, he’s got a 9-pound limit it something, but he’s going to be hard-pressed to challenge for the win considering that he started the day more than 4 pounds off the pace. 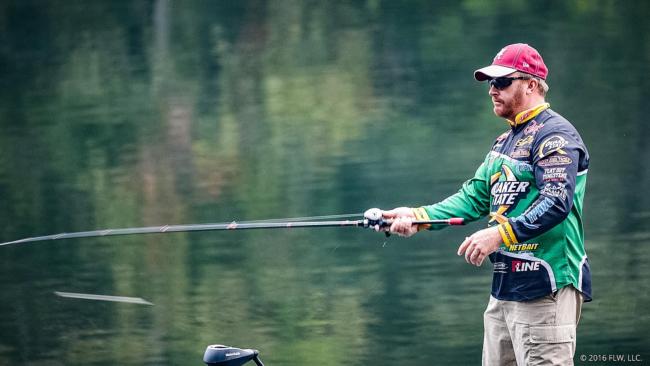 Scott Canterbury came in with the lead, and though he’s been chased down, he just needs a limit to get back in the hunt. Moments ago, the current up in the river turned on, and Canterbury started getting bites. It might now only be a matter of time before they turn into quality keepers.

One plus for Canterbury today is that he’s got the spot to himself. Between Neal, Cox and himself, there were always a few boats around on the previous days. Today, he can hit whatever he wants to whenever he wants to hit it. 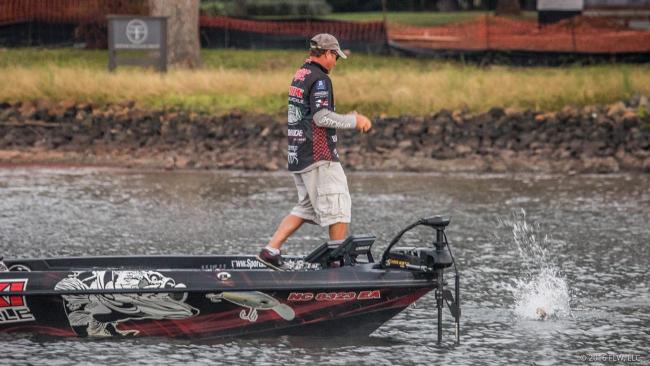 After settling down to re-group for a moment, Bryan Thrift changed up to a buzzbait and caught keepers on back-to-back casts to fill his limit. It’s super early in the day and he’s already got nearly 10 pounds in the boat. So, watch out for Bryan Thrift.

Behind him, Scott Beattie has four in the boat, but to this point, his quality is all just a tough under the pace Thrift is setting. 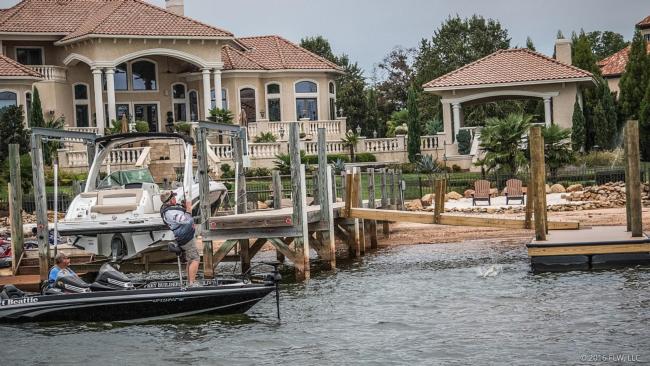 After boxing his third decent keeper of the day, local pro Scott Beattie has taken the lead from Bryan Thrift. Beattie started the day a few ounces back of Scott Canterbury, and he’s got a pile of local knowledge to use in an effort to close out a win. Today, he’s using it all, hitting a ton of spots and moving fast with a Senko, shaky head and a buzzbait. Mostly, he’s hitting small rocky stretches of bank or individual docks.

Not too far back, Wesley Strader might be about to make a move. Throwing a buzzbait, his first keeper was a solid 2-pounder, and he lost a monster largemouth that would have gone at least 5 pounds and totally changed the game. That may have been his one big bite, but he might also have dialed things in enough to get a few more. 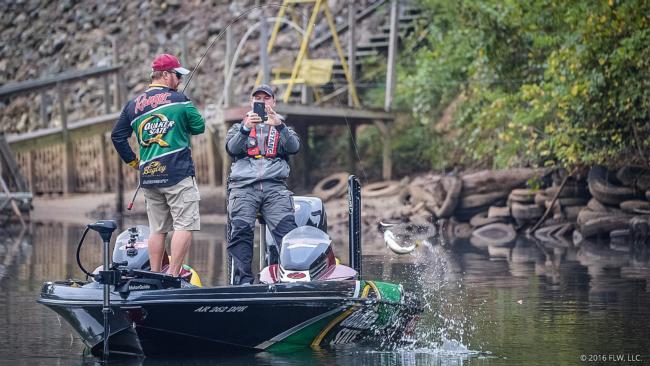 After losing a quality fish in a laydown log, Scott Canterbury put his first keeper in the boat, a fish that goes a little more than 1 pound and then another very small keeper. Unofficially, after a few more catches from Michael Neal and Bryan Thrift, Canterbury is in third now. But, there’s a long way to go and it’s probably fair to assume everyone will catch a limit – then we’ll really start counting.

There’s patchy fog building around the lake, now as well. This morning, it really feels like fall on Lake Norman. Though the fog isn’t too bad, it might slow a few anglers down when moving around. If it sticks around for a while, it might even keep a few pleasure boats off the lake, which would likely be a big help to the pros.

There have been a few other catches around the field as well, and they’re all listed in the live OTW weight estimates. 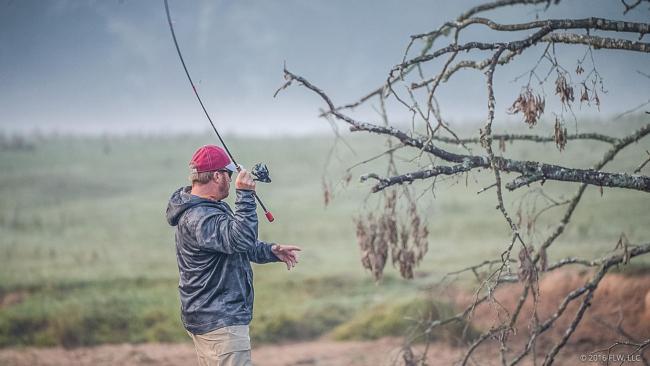 Running way up into the river to start, where he’s been starting each day, Scott Canterbury has caught one short fish, but nothing else. He’s mixing between a fluke and a drop-shot rig.

Elsewhere, Michael Neal has added a second small keeper, Jason Meninger and Billy Shelton are on the board with keepers and Todd Hollowell started his day with a 2.5-pounder.

Throwing a topwater to start the day, Bryan Thrift is the first on the board, with a solid 2.5-pounder and a 2-pounder to get things going. The second one missed his topwater first, and he managed to throw right back and get it to bite again. Unofficially, Thrift is now in the lead.

The other man on the board is Michael Neal, who’s first also came on a topwater, though it is merely a “keeper” size fish. 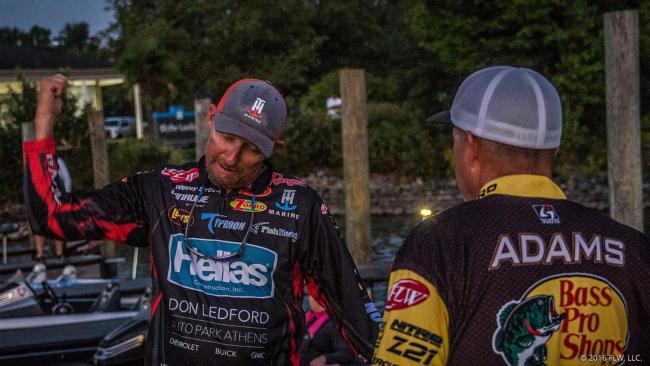 There have been tighter tournaments, but they don’t come around often. Today, the final day of the Walmart FLW Tour Invitational presented by Lowrance on Lake Norman, is truly anyone’s day. Less than 2 pounds separate first and ninth, and 10th isn’t far behind that. With a Forrest Wood Cup berth and more than $60,000 on the line, everyone is going to be giving it their all. With so much on the line and so many in the mix, drama is almost assured – the only downside is that we may truly have no idea who’s going to win until the final fish is weighed.

So buckle up. We’ll have a pile of updates all day long, lots of pattern insight and some great photos to go with the whole mix. Today, it’s time for someone to shine on Lake Norman and etch their name in the record books as the winner of the first ever FLW Tour Invitational.