Five Hours on Norris with Hollowell

Finishing off practice with the Tomato Man 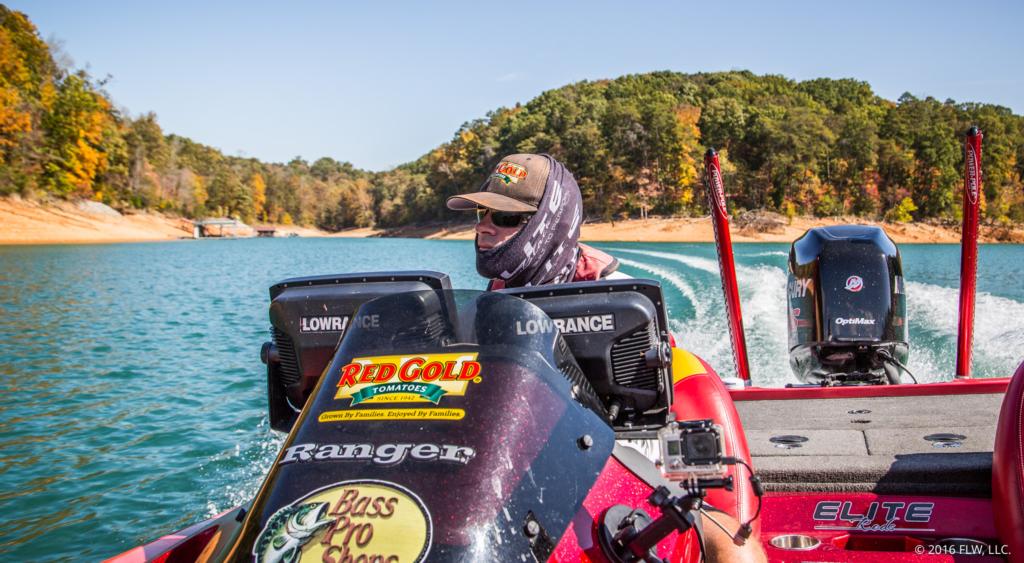 Tuesday marked the final day of official practice for the Walmart FLW Tour Invitational presented by Quaker State on Norris Lake. FLW Tour pro Todd Hollowell is fresh off a fourth-place finish in the first Invitational on Norman and loves fishing in the fall. For a look at how he breaks down a lake, I joined him for the final afternoon of practice. 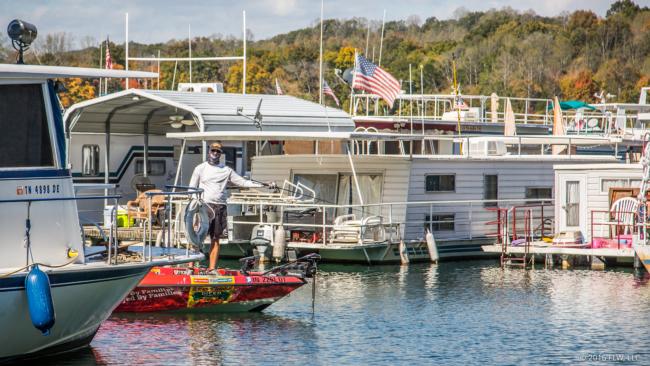 I meet Hollowell at about noon on the lake, not where he launched for the day but at the most efficient meeting spot for him. Fishing some docks on the way in, Hollowell makes use of about every second before I hop in the boat. 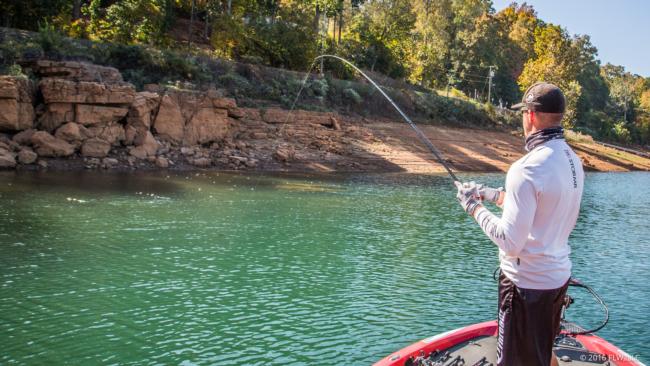 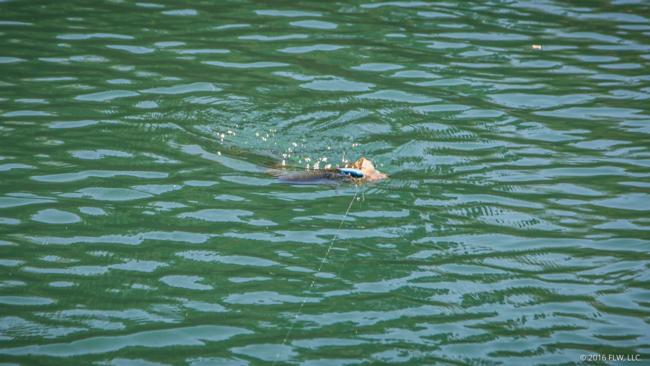 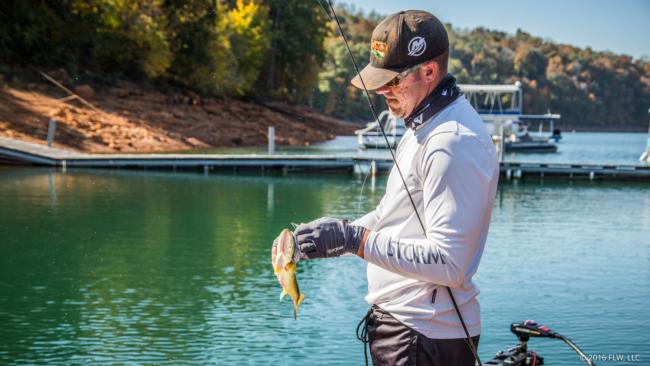 Hollowell starts working along the bank with a topwater. He connects in short order with a quality largemouth. Before losing the fish boat-side, Hollowell notes that there were five more following the hooked bass out toward the boat. A bit farther along, Hollowell scares up another keeper bass and then lays his topwater down, content with the bank. 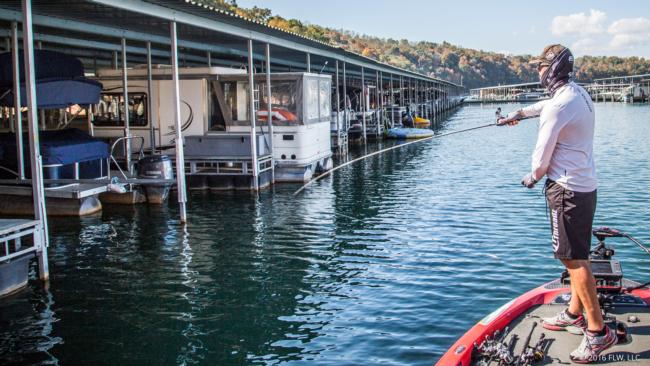 His next move is to some adjacent docks, where he flips a jigging spoon around the edges and into the more open bays. Along the way, he explains a little bit of his strategy regarding the smallmouth population in the lake, since smallmouths have to be 18 inches to weigh-in.

“I feel like I’ve got one or two places where I could catch one or two big smallmouths,” says the Fishers, Ind., pro. “But I don’t know about five of them. The guy who can catch a limit of them will really jump out in front in this event.”

Hollowell’s ideal bag would likely be two big smallmouths and then three largemouths or big spotted bass to go with it. 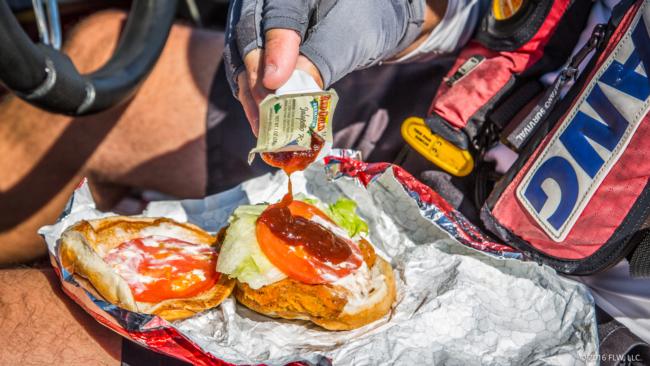 Putting down his rod, Hollowell idles out and breaks into the chicken sandwich I brought him for lunch (it was slated to be ham and cheese otherwise). He’s probably the only pro on Tour who carries ketchup in the boat, and he makes sure to dress his lunch appropriately before taking off to the next stop. 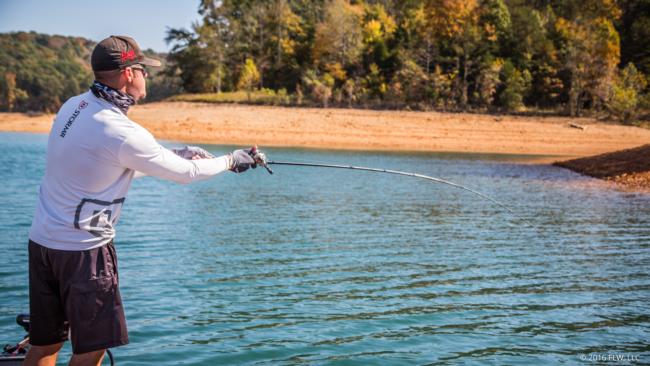 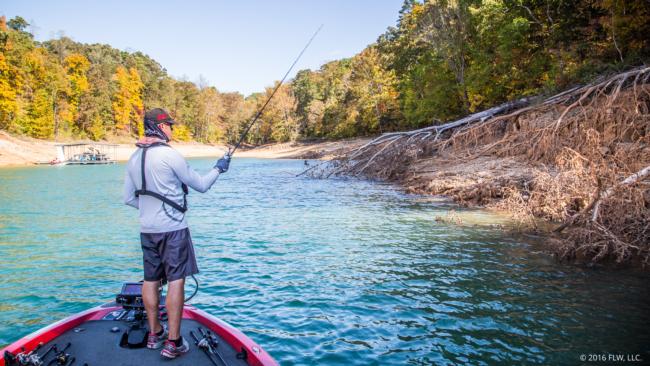 After a bit of a run into one of the long river arms on Norris, Hollowell stops on a sloping point with scattered rock and then moves on into a nearby pocket studded with laydowns and a few docks.

“I came here for a couple hours on the way to Norman last month,” says Hollowell. “It’s amazing how much you can learn in just a short amount of time. I’m a little more dialed in to what I’m looking for now than I was back then.”

He strikes out at this stop, and it’s on to the next. 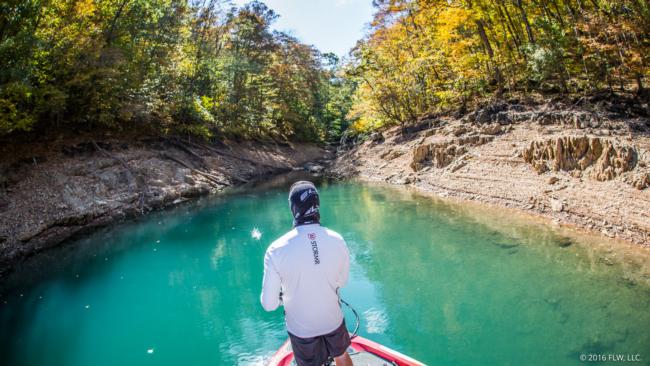 Hollowell stops in a small pocket and begins working toward the back. Because it is fall, he’s keeping every option open.

“I like fishing in the fall. It seems nothing makes sense in the fall, and that suits my style,” says Hollowell. “I fish the flatter, shallower stuff and then the steeper stuff, and you get just enough bites to think both are the deal.”

On his way back out, along the steeper bank, Hollowell sees a keeper trailing his topwater and punches in another waypoint before moving again. 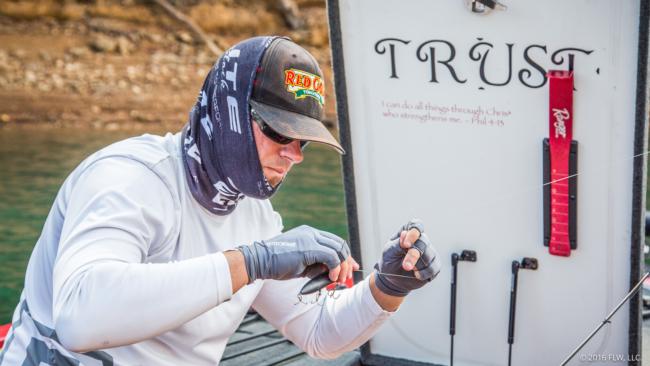 Stopping on a shaded bank, Hollowell pauses to tie on a black topwater instead of a shad-colored one he’d been using. He works down the bank but strikes out with the topwater before flipping into an area where he caught one prior to Norman. After a second, he picks up and there’s one swimming off with it. Showing great discipline, Hollowell shakes him off and punches in a waypoint on his Lowrance.

Next he pulls up his trolling motor and idles over a nearby point to look for bait before making a quick stop at a little pocket with laydowns and rocks along the main drag. With no more bites, he cranks up and heads farther up the river arm. 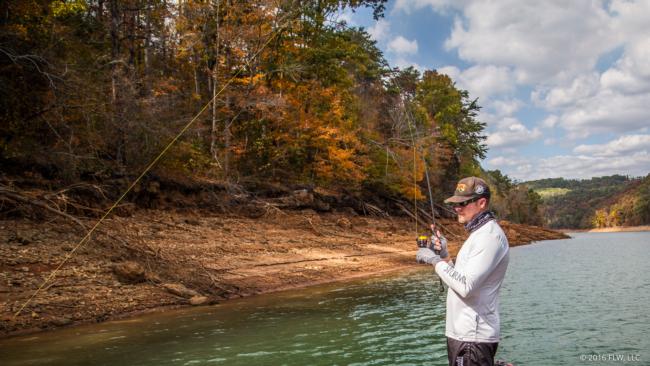 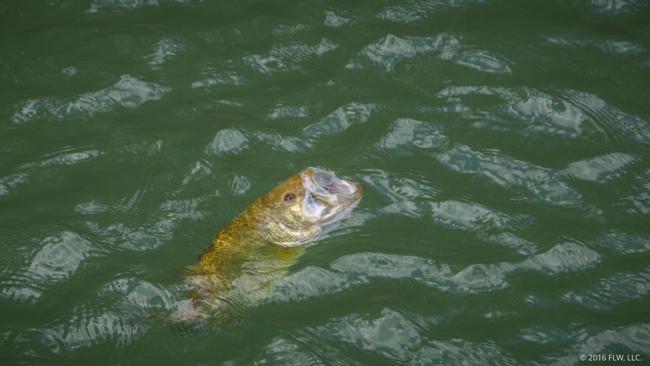 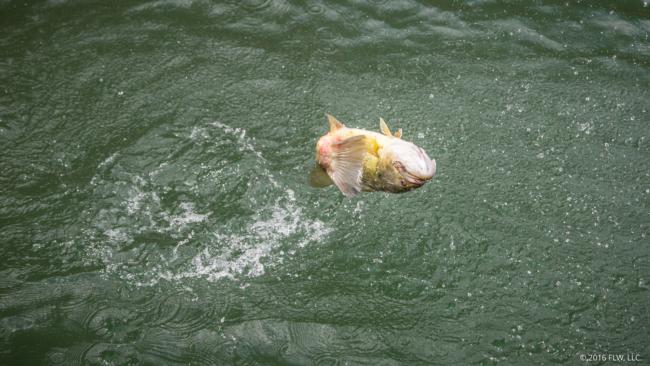 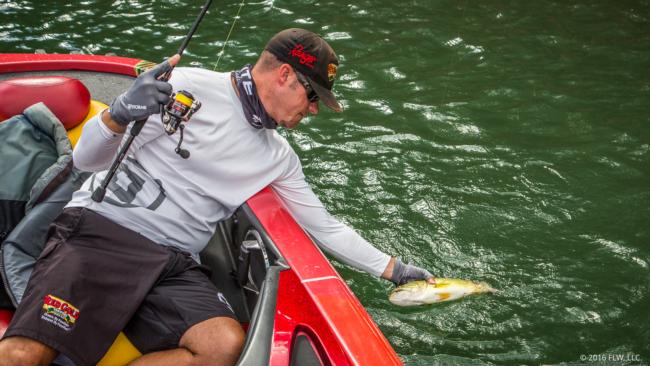 Up the river, Hollowell pulls up to a bank with rock and laydowns and begins pitching a finesse jig. Though the lake is about 20 feet below full pool, some of the laydowns still have plenty of wood left in the water.

Quickly, Hollowell connects. Though he briefly intends to shake the fish off, he ends up playing a 3-pounder (2.90 on the scale, to be exact) up to the boat.

“No more hooksets,” he says. “That’s what I wanted to see right there.” 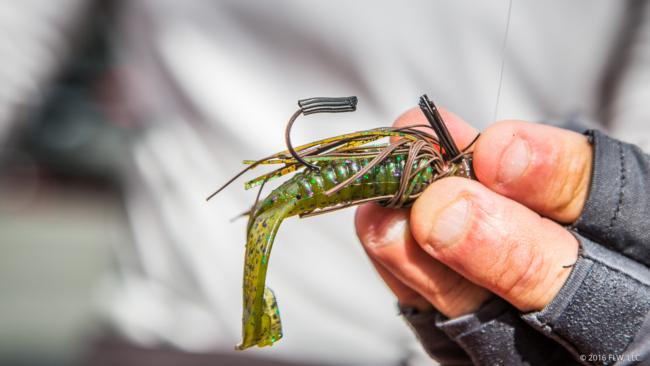 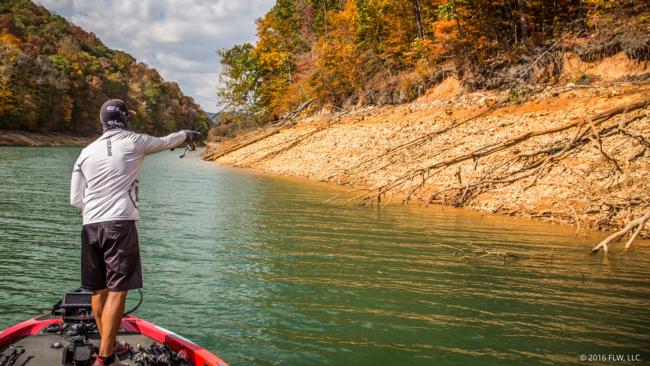 After adding a bit of rubber to make his jig fishless, Hollowell makes a short move to another stretch of similar bank. He’s pitching his jig on spinning tackle, which quickly gets a few more bites – enough that it’s time to make a move a little farther up the river.

“That Hollowell kid might catch ’em at Norris,” says Hollowell as he takes off. 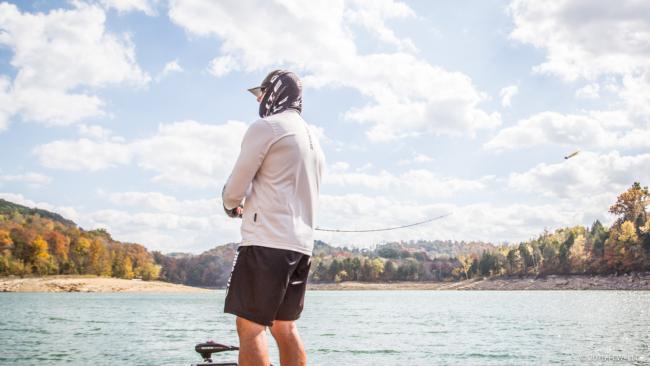 Farther up, with a little more stain in the water, Hollowell pauses to fish a pocket with a couple of laydowns and then pulls out a vibrating jig for a nearby bank. Like much of Norris, the bank is pretty steep, and though he’s fairly close to the bank, the boat sits in an easy 12 feet of water. It’s not long before Hollowell shelves the vibrating jig. He’s not feeling it and wants to keep moving. 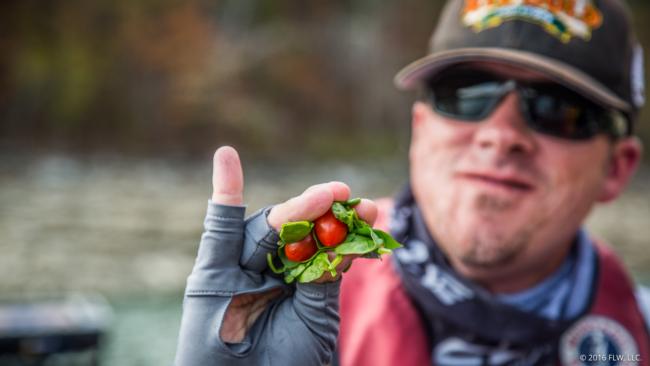 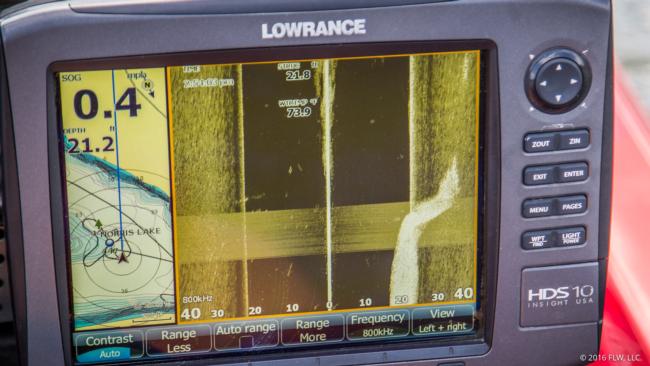 After a quick break for a healthy snack, Hollowell idles a nearby point and marks a pile of brush and a pile of bait. Tying on a football jig, he makes a few casts into the brush with no results and then picks up his jigging spoon again. It gets tossed around for a bit with no luck, and the pro dismisses some of the fish as catfish. That prompts him to pick up and head back toward the main lake. 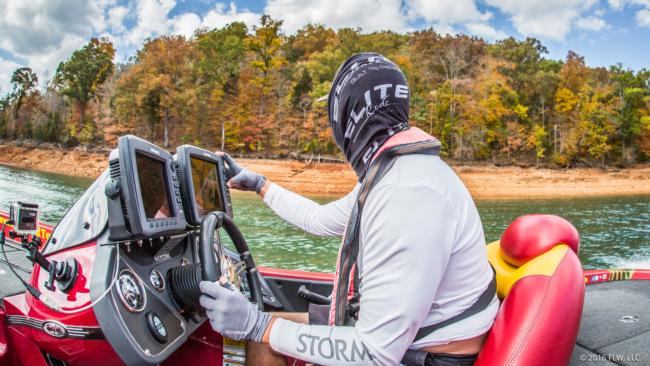 On the way out, Hollowell pokes into a few other pockets near his prime stretch of bank and punches in a few waypoints when he spots a likely location. It’s a happy medium between totally pursuing his pattern and doing something completely different.

“In practice, I like to do different things and stay open to multiple deals,” says Hollowell. “On tournament day, you can run a pattern all day … but not today.”

Hollowell says that when he was younger, running one thing too much in practice used to bite him, and that sometimes in tournaments he’d not be as willing to stray from that pattern that worked in practice. 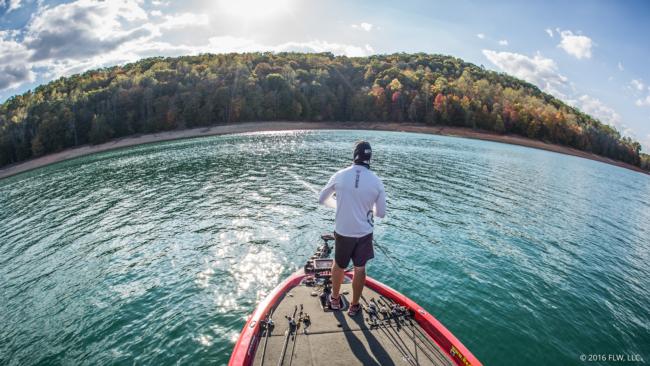 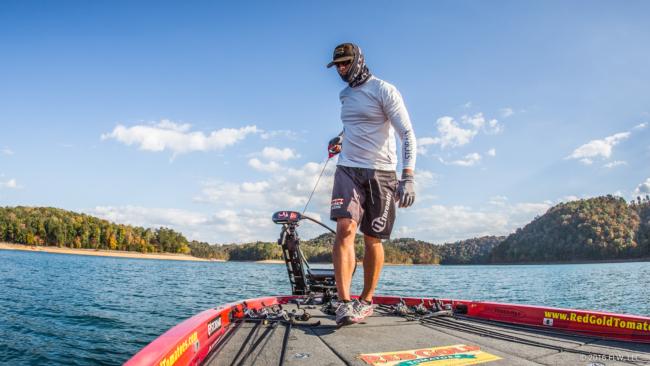 After a fruitless stop on a wooded bank in the back of a pocket, Hollowell settles down to idle over an offshore flat or hump. It’s almost smack in the middle of the lake. Hollowell’s Ranger is in about 40 feet of water. Marking some bait, which is harder to find than it should be in the fall, he pulls out a topwater and casts around.

Though he says he marked one fish in among the bait balls, Hollowell isn’t able to get that one fish to play after a couple dozen casts over the area. So he pulls up his trolling motor with practiced ease, and the former collegiate baseball player makes another move. 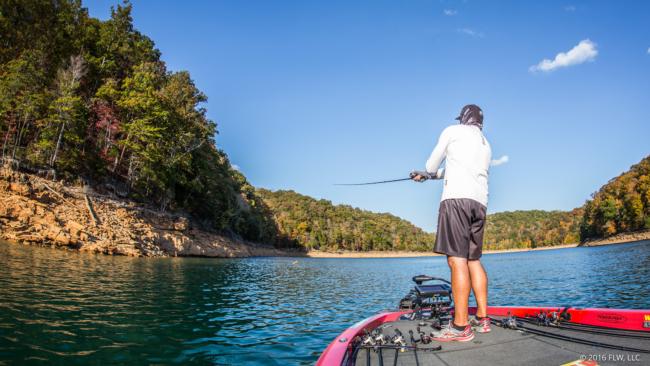 Our next move is to a rocky point with a channel swing on one side and a pocket on the other. With a little breeze blowing, Hollowell picks up a jerkbait and starts slinging.

In no time at all, Hollowell has elicited a follow from one of the big and elusive smallmouths in Norris.

“Now I don’t know if I should stay in this area and try to catch one,” says Hollowell. “Maybe that’s what I should have done when the wind was blowing.”

His final decision is to hit another point across the way. There, nothing follows him out, and he picks up again. 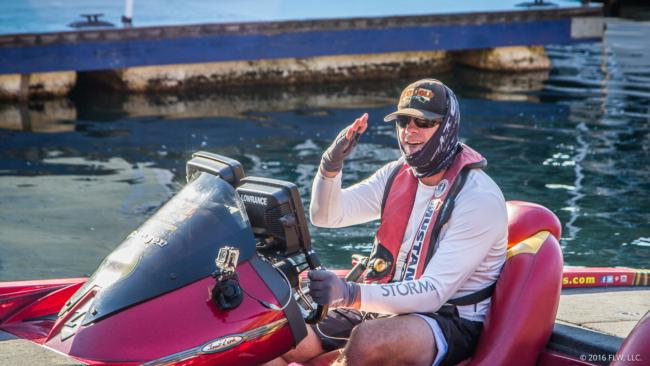 At about 5 o’clock, Hollowell drops me back off at the dock. He’s got about two hours of daylight left and plans on heading up the Clinch River. Now that the wind is truly beginning to calm, he wants to do some last-minute looking at the other end of the lake. After his finish at Norman, fishing the Invitationals has already been a good call for Hollowell. If he can put together another good week on Norris, it might be a great call.