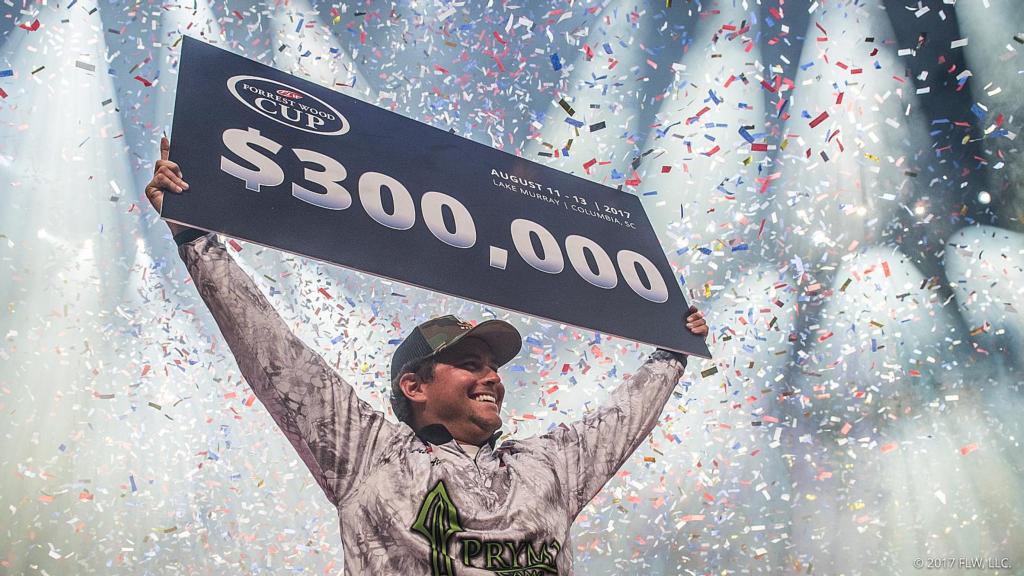 Justin Atkins weighed 21 pounds, 5 ounces on day one of the 2017 Forrest Wood Cup at Lake Murray to take the early lead. After a brief stumble of “only” 15-14 on day two bumped him back to second place, the young Alabama pro stormed back on Sunday with the largest bag of the tournament, a whopping 22 pounds, 1 ounce, to earn the first win of his career.

With a total of 59-4, Atkins earned $300,000 and the title of Forrest Wood Cup Champion, handily making up for near misses in the T-H Marine BFL All-American, where he finished third, and the FLW Tour Rookie of the Year race in which he finished runner-up.

Starting the year at Lake Guntersville, near home in Florence, Ala., Atkins made a top 10 in his first-ever Tour event. From there, he competed all year long for the Rookie of the Year title and capped a stellar season with one of the most superlative Forrest Wood Cup performances in recent memory. Atkins fished for Mississippi State in college, and has come up through the ranks with a herd of other young pros. All season, he said he was living his dream, doing what he was meant to do.

“When I say I feel like this is what I’m meant to do I don’t mean that in any kind of arrogant way,” says Atkins. “I just went out on a limb of faith this year. I didn’t have the money to fish the full Tour when I started. I had enough money to fish about four events, and I was hoping I would make it. I felt like God had a plan, and that’s what I was supposed to be doing. I just went out there and fished, and today signed off that I was supposed to be there.” 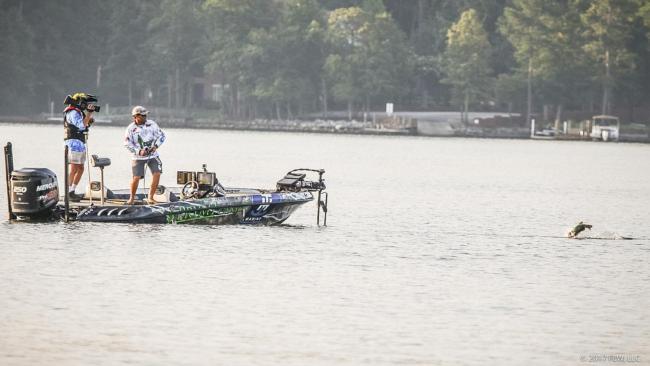 Cashing in on cane

All week long, Atkins targeted cane piles and the fat blueback herring-eating largemouths that hung around them, but his success story actually started back in college, when he fished in consecutive College Bass National Championships on Lake Chatuge, a spotted bass fishery in north Georgia and North Carolina. There, Atkins learned some hard lessons, but in the post-game, he was able to pick up some herring skills from fellow competitors Brad Rutherford and Patrick Walters.

“They did really well, and they were catching them on top and calling them out of brush,” says Atkins. “I didn’t have a clue what I was doing. I was friends with them before the tournament ever started, but learning from them how they managed to succeed, that taught me a lot.”

Because of that, Atkins was prepared to look for cane-dwelling largemouths in practice, but he was the one to put it together, demonstrating just how quickly today’s pros can master a bite. 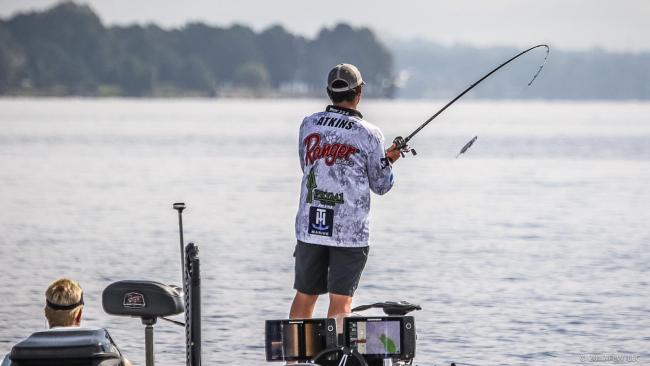 Atkins had about 60 to 80 waypoints on cane piles he liked, and he accumulated most of them after some early struggles in pre-practice.

“It took me two days to get my graphs dialed in,” says Atkins. “That cane is hard to see. It’s real narrow. So I had to sit there and play with settings. I was here an afternoon and a full day before I finally found one pile. I went over it, and I saw it on the sonar and marked it, and I could barely see it on my down-view – just a little bit. I ended up graphing for a while and fishing some and never found any. The next morning I went to that spot and went around and around and around that pile. I turned my sensitivity up, my contrast and all that, until I finally got to where I could see it and knew what it was on my side-scan. After that I probably found 100 piles in my next six days of practice.”

Besides cranking up his sensitivity and contrast, Atkins also sped up his chart speed, which made the narrow cane piles appear larger and much more visible. Once he was dialed in, Atkins could mark cane piles up to 100 feet out to either side of his boat.

After some success in pre-practice, Atkins started on an innocuous pile on the first day of official practice and caught a 3-pounder on his first cast. Once he’d marked plenty of fish, he committed almost solely to the cane-pile pattern and continued to expand on it throughout practice.

Most of the piles topped out about 8 to 10 feet below the surface, rising up from about 20 or 22 feet deep. The fresher and “bushier” the pile was, the more fish were in it. 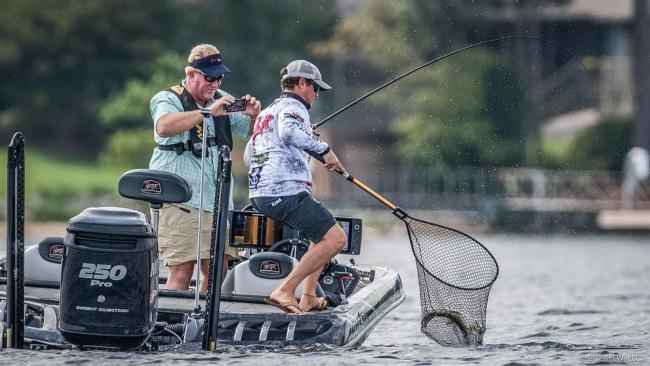 Of the 15 bass Atkins weighed, every one of them came on an ima Little Stick 135 in chrome, fished with a 7:1 gear ratio Abu Garcia reel, 30-pound-test braid and a 7-5 medium-heavy composite rod. Mostly he fired over and roughly around his cane piles, but he did catch some fish that were actively schooling near the piles. He figures he weighed in 11 bass that he “called up” and four that were actively busting.

One of the keys to his success was calling up more fish than average late in the day, and he did that with a slight cadence change for his topwater. After walking it fast in the morning, Atkins slowed down to what he characterized as a “winter jerkbait” cadence – just fast enough to keep the line from going too slack and to keep the bait moving toward the boat.

On the final day, after missing a limit’s worth of keepers early, he rolled into one of his best places and went to work.

“There are two cane piles on one point. One’s on one side, and one’s on the other, and the fish come up schooling in between,” says Atkins. “I think you had two groups of fish that were using those. I idled them the last day of practice, and those two piles had the most fish. I didn’t fish them the first day because I had a lot of weight before I got that far. The second day I went there and caught a pretty good one off one of them, but I went in there pretty late, so I missed any schooling action. Today I decided to go in there early, and it was going down when I got there.”

All of a sudden, Atkins had landed a pair of fish for more than 10 pounds to start his limit, and the day just went up from there. At about 1 p.m., he made his final cull with a 4-pounder he called out of a cane pile to push his limit past the 22-pound mark.

All told, the patience to figure out the graphing game and the ability to put together an unfamiliar pattern in the tournament came together for a tremendous win. Had the Cup been four days, Atkins likely would have shattered the total weight record. As is, he put the biggest finishing touch ever on an already stellar rookie season. 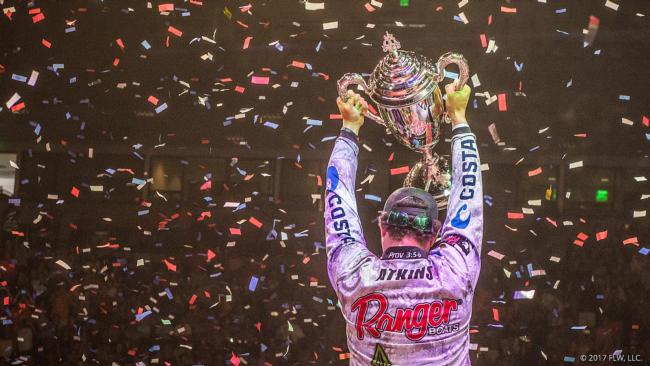