Some gems from Lake Murray 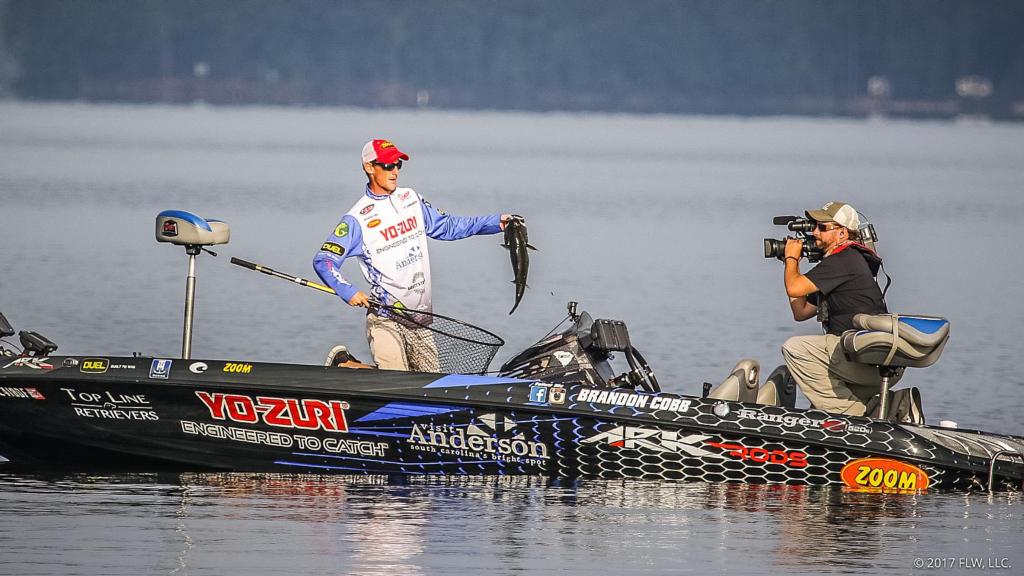 The Forrest Wood Cup is the biggest tournament of the year for the 53 anglers who made it, but it’s also the highlight of our coverage team’s season. From takeoff to weigh-in, the crew puts in more effort at the Cup than any other tournament of the season. This year, the competition wasn’t the only thing that rocked – the fishing did, too. Instead of critical 3-pounders, a bevy of good fish hit the scales, and 5-pounders crushing topwaters proved to be the difference makers. Below are twenty of the best photos from Lake Murray, and you can find literally hundreds more from on-the-water, takeoff and weigh-in in our online galleries. 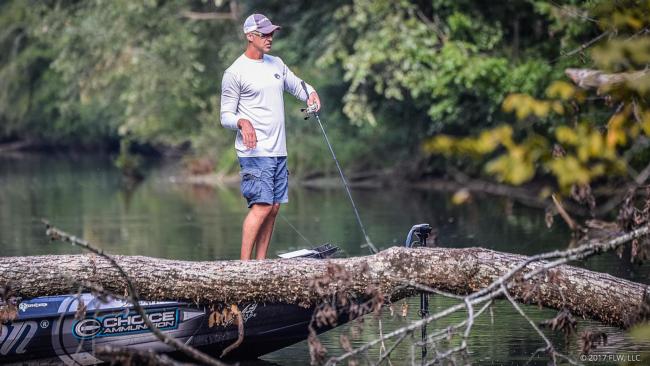 Freelance photographer Andy Hagedon started his tournament shooting Andy Morgan pitching and flipping up the river. Morgan is the best in the business up shallow, but the three-time Angler of the Year picked the wrong week at Murray to try and grind it out on the bank. 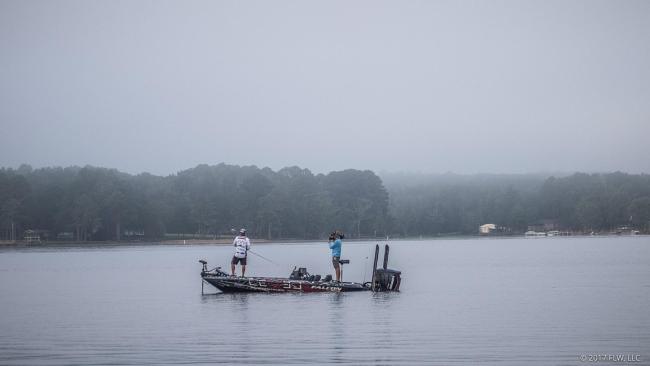 Down on the lower end of the lake, Anthony Gagliardi started the tournament fishing well off the bank in the fog, and FLW Graphic Designer and Photo Editor Matt Pace was right there with him. On day one, lingering mists in the lower end contributed to a red-hot topwater bite that led to shockingly high weights to start things off. 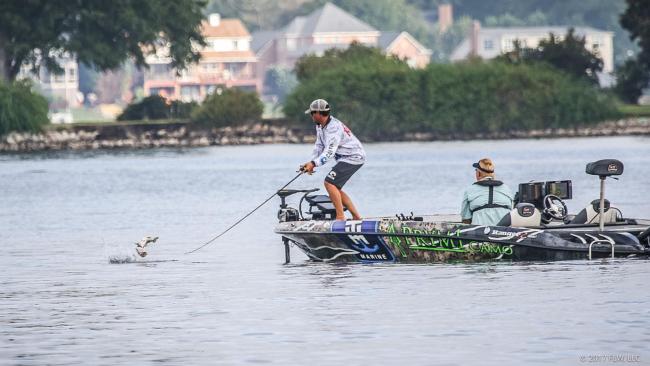 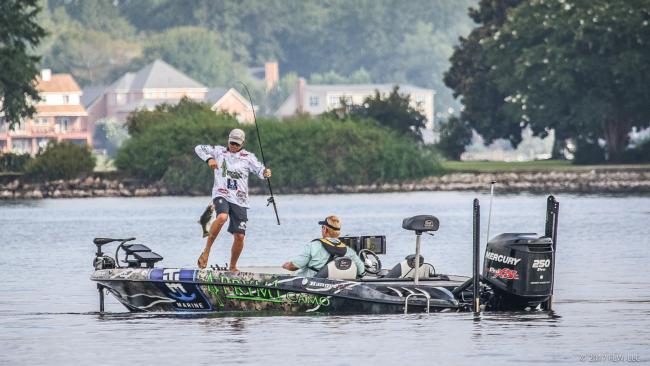 One of the pros who took advantage of the strong morning bite on day one was Justin Atkins, who led off the tournament in style and was culling up past 20 pounds by 11 o’clock. FLW Senior Editor Kyle Wood watched him battle one of his early kickers into the boat and then wind up for and eventually unleash a fist pump. 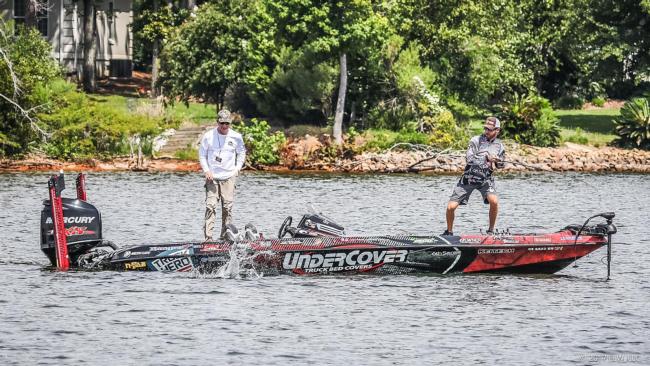 Aaron Britt fished for schoolers the majority of the tournament, and he hooked up with this one on a double fluke rig when they came up busting just feet away from where he’d been fishing earlier. FLW Associate Editor Jody White was on the spot to watch Britt get a bite from a fish he called a 4-pounder before hooking up on this one – which turned out to be splashy and not even 14 inches. 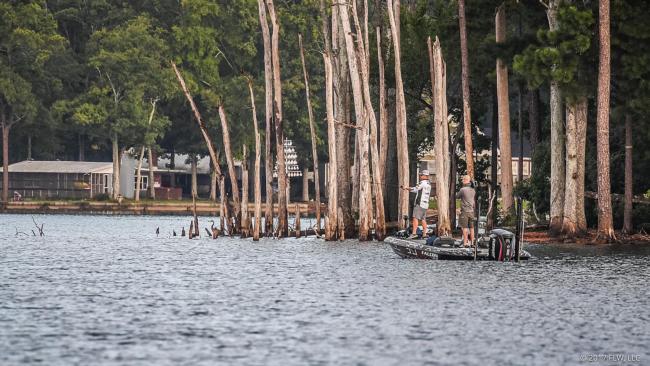 Starting day two in second place, Gagliardi tried to catch a few a little closer to the bank early. Freelance photographer Charles Waldorf was on him, and managed to get two anglers in this photo. Do you think the heron told Gagliardi to get a real job? 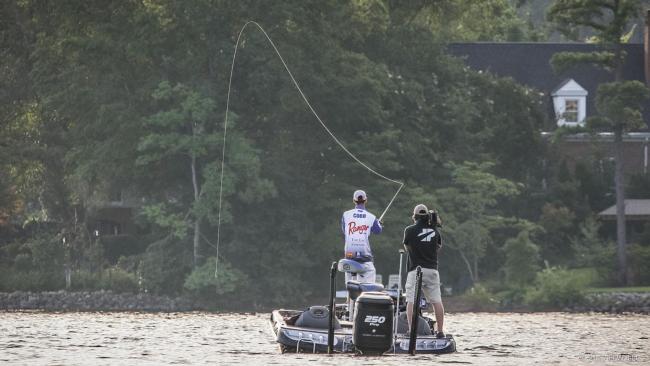 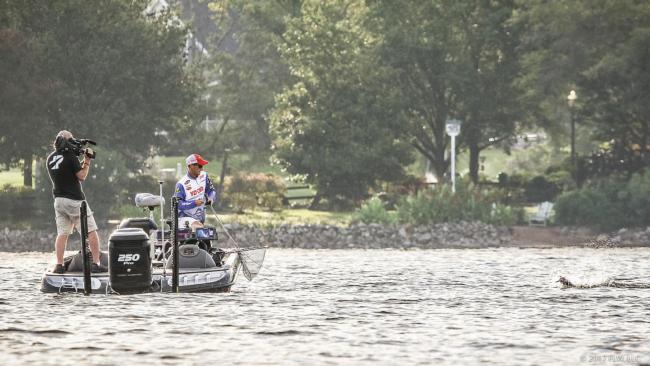 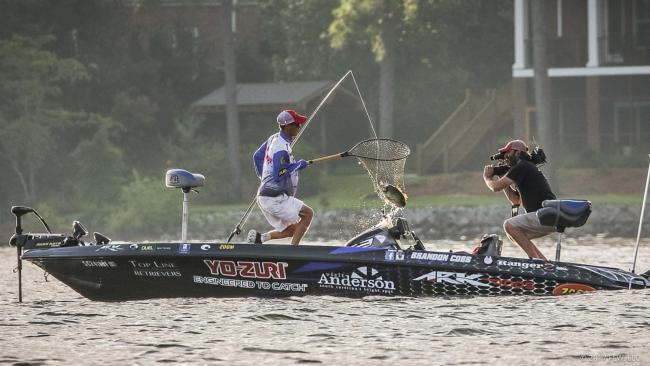 After a slightly slow start on day two, Brandon Cobb went on a tear, taking full advantage of another strong morning bite before the sun got all the way up. Wood was on him, and got to watch the Carolina pro put on a clinic and load the boat with more than 19 pounds – enough to give him the lead going into the final day. 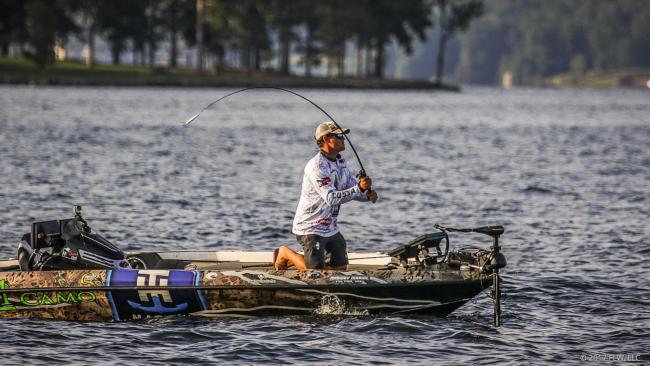 Atkins had a frustrating day two, with a slew of missed chances that cost him the lead. This was the start of one chance he didn’t miss. White watched him pull a new rod out of his locker, and then, just as he closed the lid, a bass started chasing herring. One quick cast from his knees and Atkins had his third keeper in the boat – a healthy 3-pounder that would ride to weigh-in. 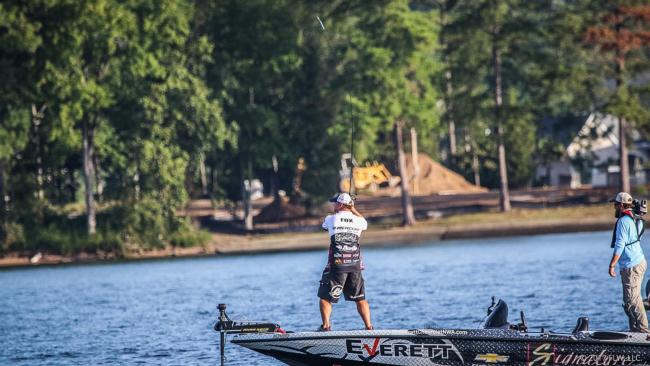 FLW Video Production and Digital Brand Manager Chris Burgan started day two on Travis Fox, who had caught just six fish on day one, but was around plenty of bigs. He was bombing casts to breaking fish most of the time, and if you’re gonna cast big then you’d better have a good windup. 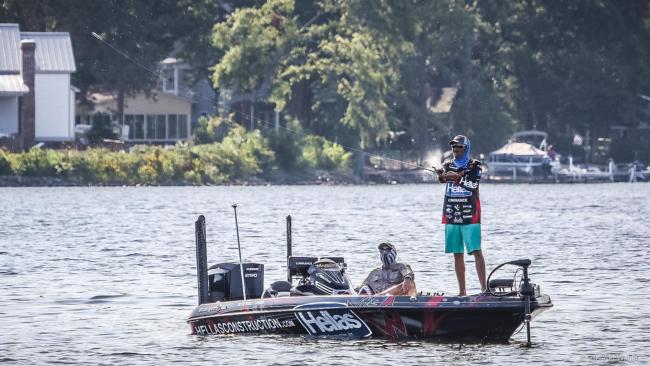 With some new arrivals, the lower end was a little busier on day two. Wesley Strader started in the lower end every day of the tournament, but day two was his best morning and what propelled him into the top 10. Strader smashed them schooling over a grassy point early and White arrived just in time to see that bite die for the day. 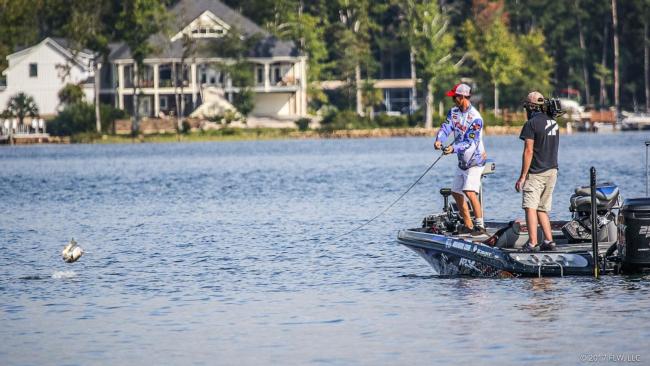 A bit later, with Wood still following, Cobb lost a fish that would have put him over 20 pounds on the day. The fish jumped twice, getting closer to shaking off each time. Sure enough, a split second after this photo Cobb was reeling in his bait without a fish attached. 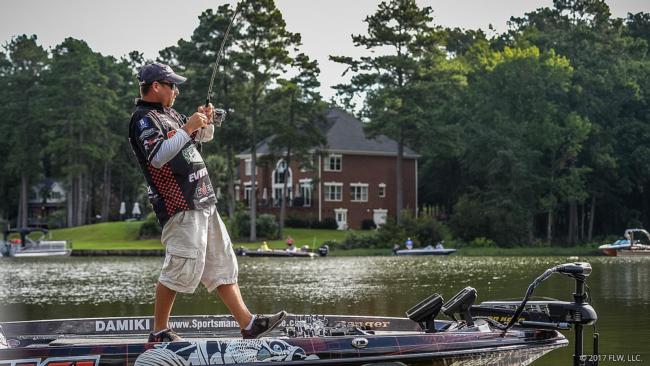 Bryan Thrift was pretty dialed in on brush, which he essentially had to himself, as the other top pros camped on schoolers or ran cane piles. Hagedon watched him at work on day two, and he was able to get some unique angles as the Carolina pro was often fishing near the bank, in the middle of deep pockets. 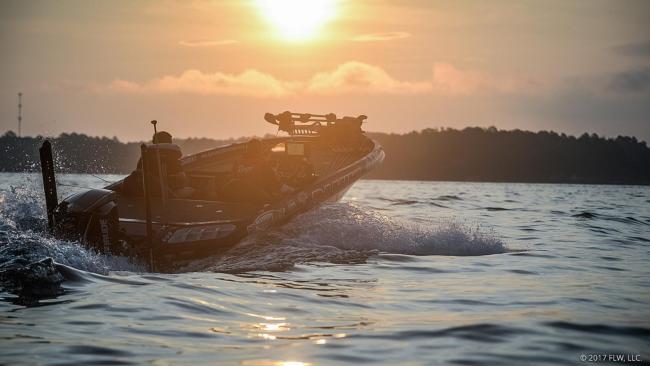 Hagedon started day three on Thrift, with the reigning Angler of the Year blasting off into the prettiest sunrise of the week. 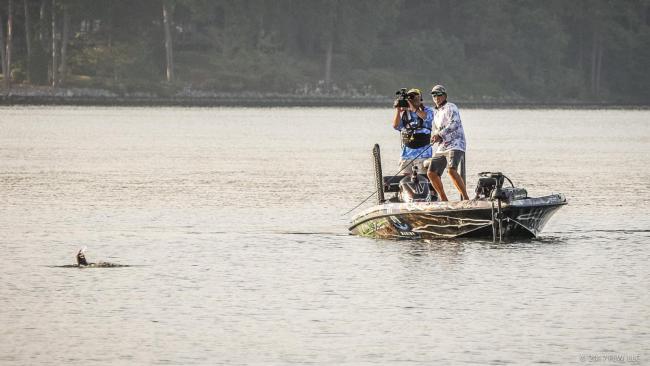 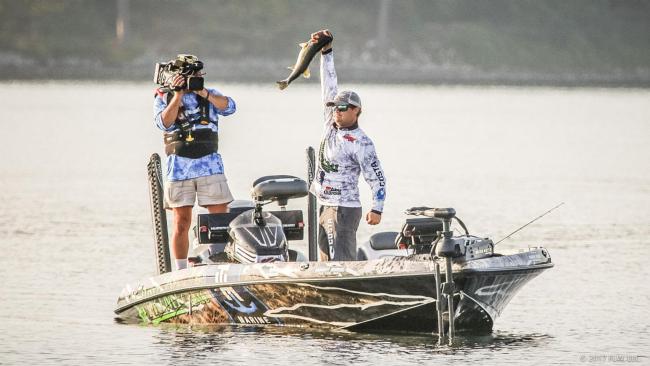 FLW Vice President of Marketing Patterson Leeth followed Atkins on the final day. You could put together a whole gallery of great Atkins moments from the Cup, but the first and second fish he caught on the final day were both around the 5-pound mark. Needless to say, he was pretty excited. 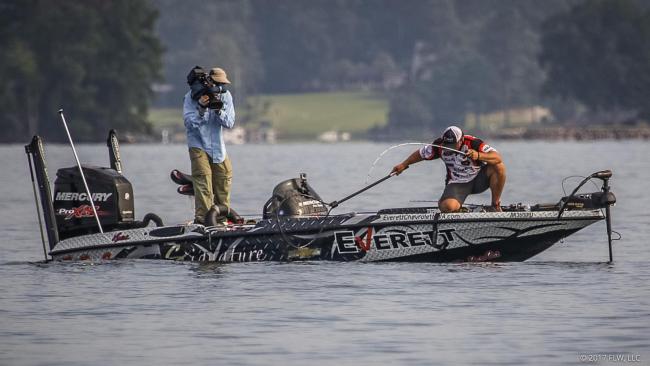 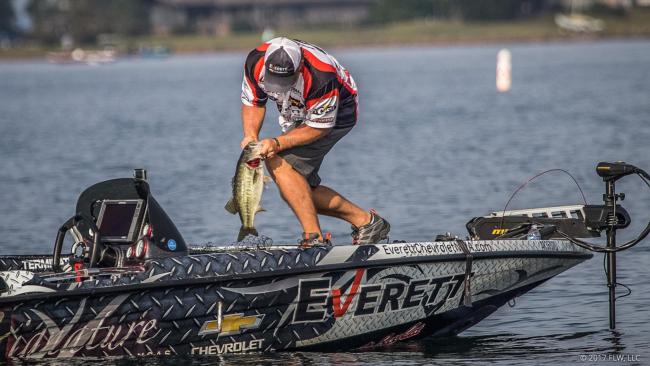 Both White and Pace watched Fox for a bit on the final day, and for much of that time he was on pace to nearly equal Atkins. Somehow, every fish he caught was big, and had he landed one of the two that he lost, the final weigh-in might have been a lot more dramatic. 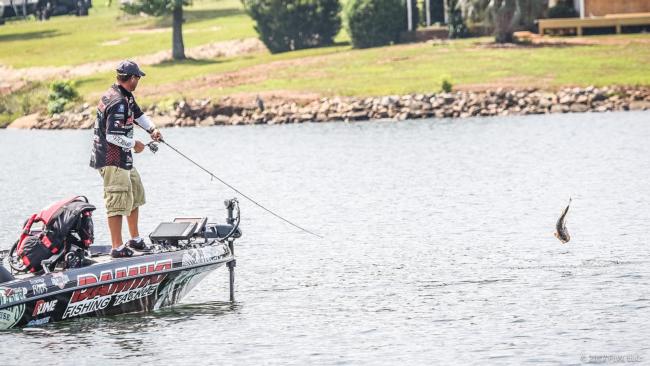 Most of the great photos of fish jumping at the Cup were the result of massive topwater bites and bass that started out close to the surface. With Burgan watching, Thrift plucked this 4-pounder from deep brush on a light shaky head, and she came up to show off anyway.