Exploring the Big O with Setzer 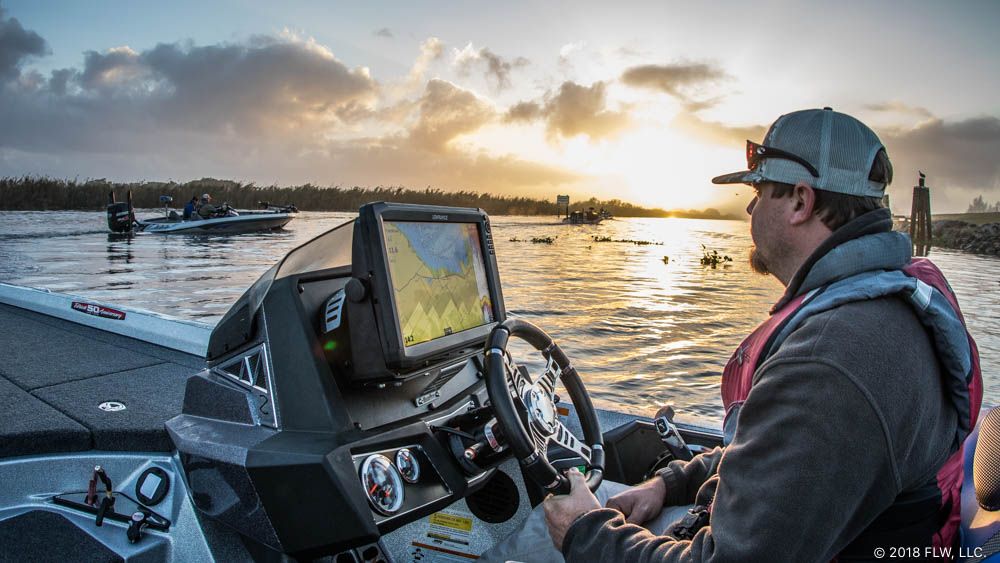 Entering his third season on the FLW Tour, Braxton Setzer is ready to get the ball rolling on Lake Okeechobee, a body of water he is quite familiar with. Though he hails from Alabama, this former Tour co-angler has been to Okeechobee more than a handful of times throughout his career, and he’s hoping past experience will help him piece together a great start to the 2018 season.

Setzer was more than accommodating when he let me jump in his Ranger for day two of practice so I could see how the young pro dissects one of the biggest lakes in the country. 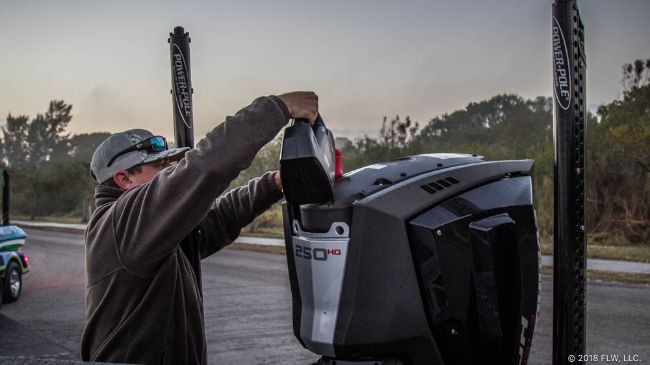 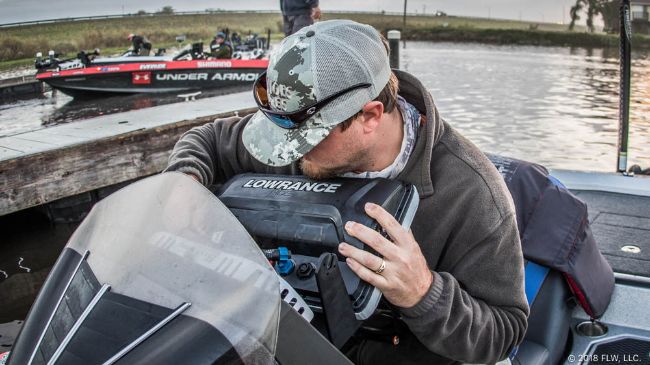 The day begins at around 7 a.m. ET when Setzer and I meet at the boat ramp near Roland & Mary Ann Martin’s Marina & Resort. While he isn’t the first guy on the water for the day, he definitely isn’t the last. After topping off his Evinrude with some oil, he splashes the boat in and mounts up his Lowrance HDS-16 Carbon on the helm. 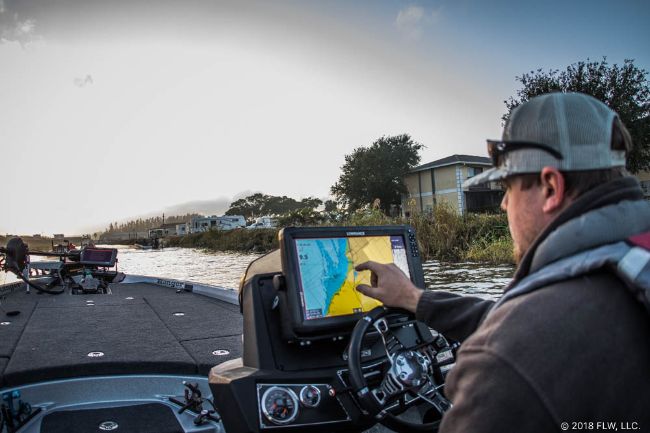 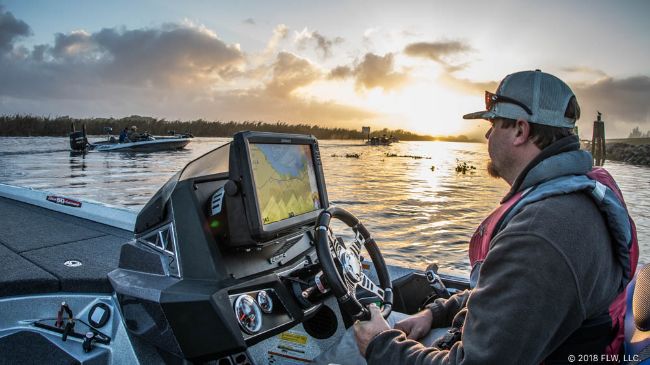 We idle toward the lock into the big lake, and Setzer studies his GPS. The plan for the day is to look at some stuff close to Clewiston before eventually making his way down to South Bay. There will likely be more driving and looking than fishing in hopes of finding clean, sheltered water. 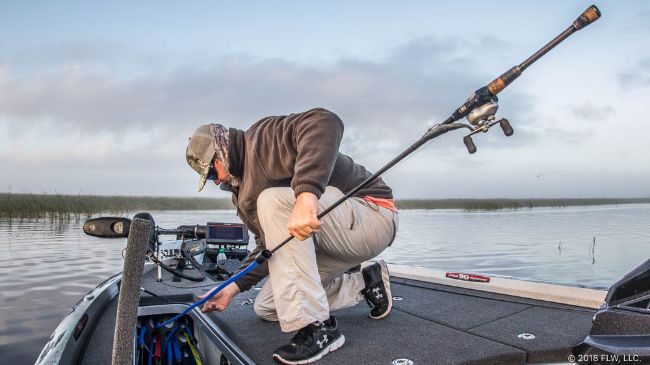 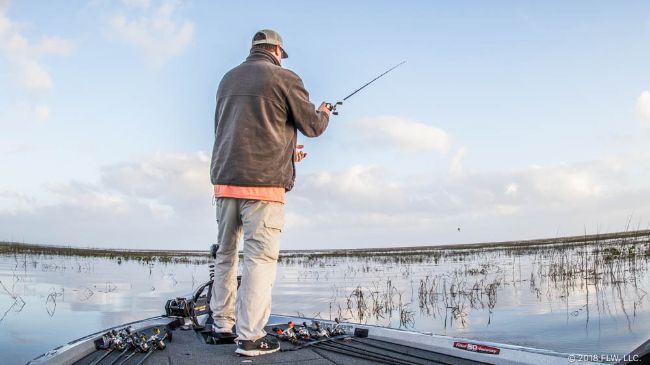 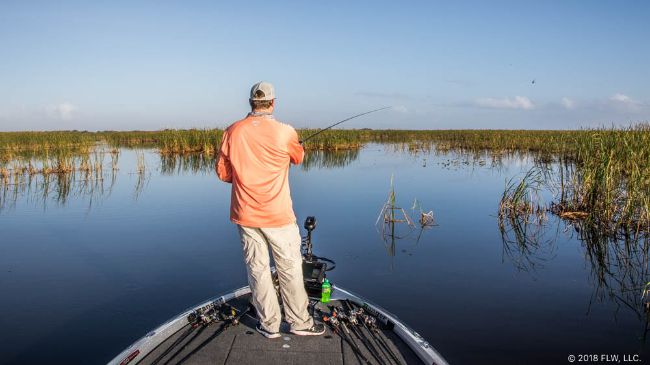 He doesn’t run far before Setzer shuts it down and begins to pull some rods out of storage. The water doesn’t look great, but he wants to give it a shot since he’s caught some fish from here before. A swim jig and vibrating jig are his primary two weapons in this area, which features some hay grass and cattails. 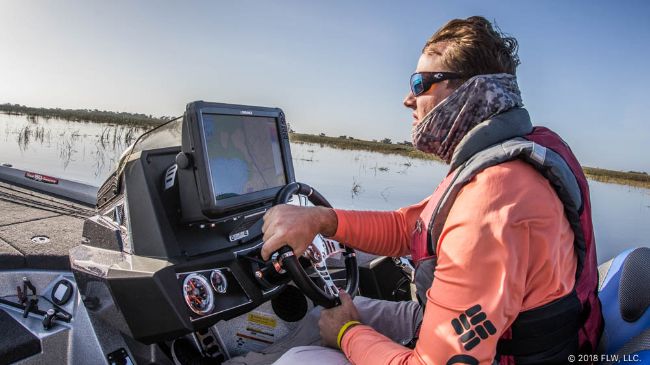 As the clouds begin to part, Setzer pulls up the trolling motor and decides to look for greener pastures, literally and figuratively. He cruises at a steady pace, with his head on a constant swivel, looking for clean water and good grass. 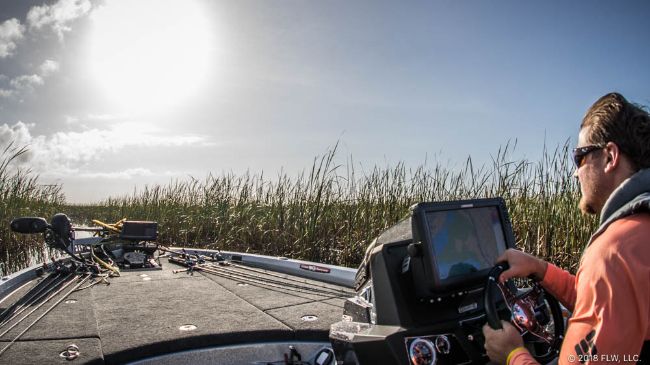 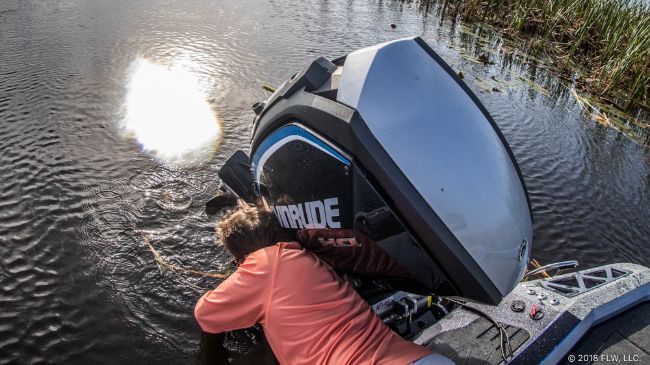 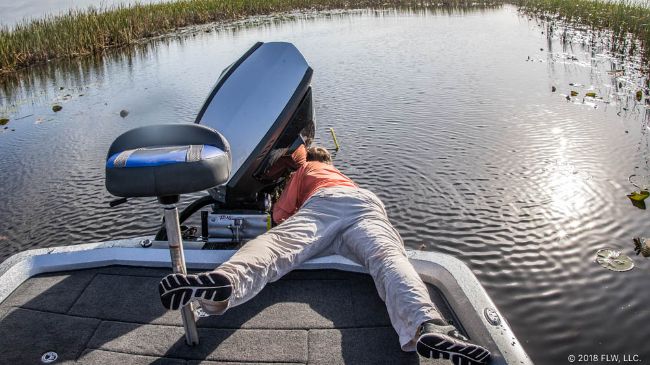 Eventually the pro turns down one of the many small boat lanes on Okeechobee, but quickly finds out it dead-ends in a wall of cattails. Setzer idles back out to a clearing where he puts the Power-Poles down and begins to do a little grass removal from the prop. It’s a real look at the glamorous life of a pro angler. 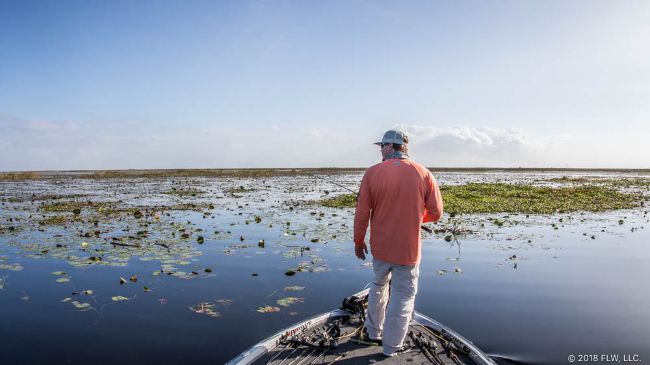 Setzer rips down the lake a bit farther before running into some good water. There are lily pads and hay grass mixed together with pennywort mats and cattails. It looks like bass fishing heaven. The bonus is clean water. 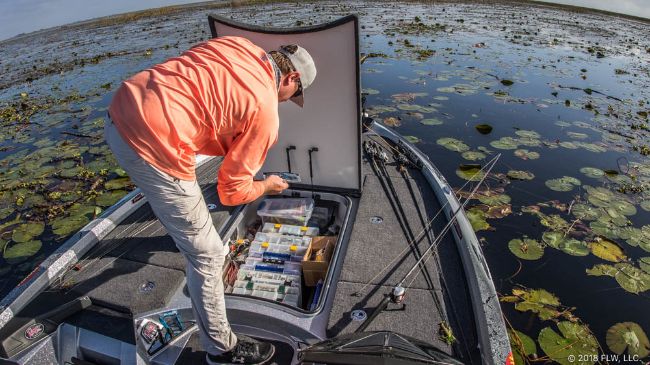 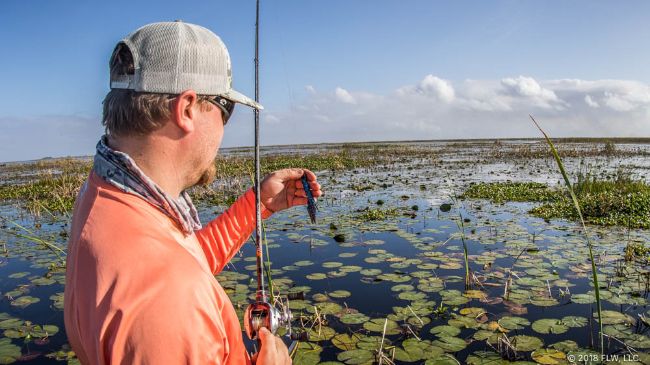 Setzer slings a swim jig around a bit before heading over to a mat that looks more than inviting to flip. He breaks out the big rod, puts on a fresh Reaction Innovations Sweet Beaver and is ready to work. Unfortunately, there are no bites to be had, so he goes on the move again. 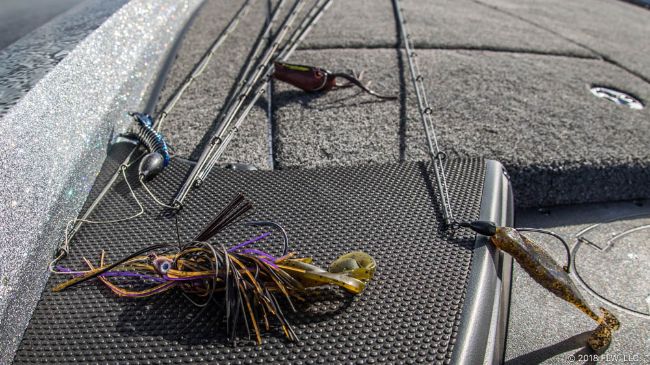 As Setzer idles down a boat lane, I take a minute to scope out his baits. Moving baits are a great way to cover water, and all of these are solid choices in Florida. His favorite is the Nichols Sledgehammer Swim Jig (pictured in the foreground), but he’s also a big flipping fan and has to have the big weight ready to go. 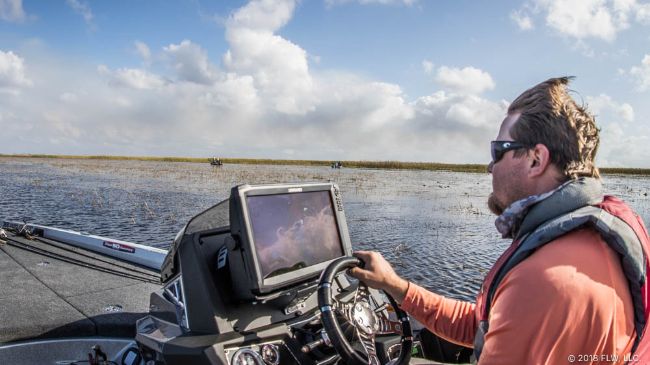 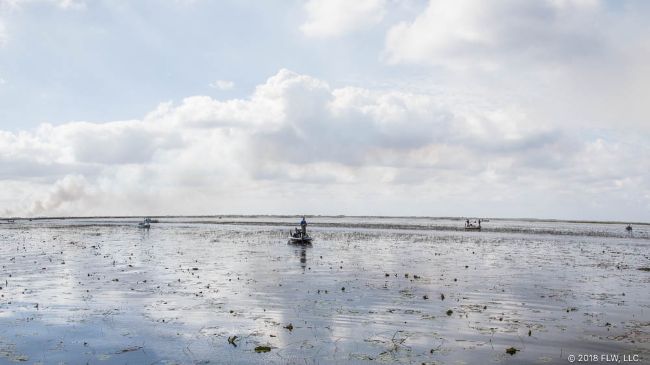 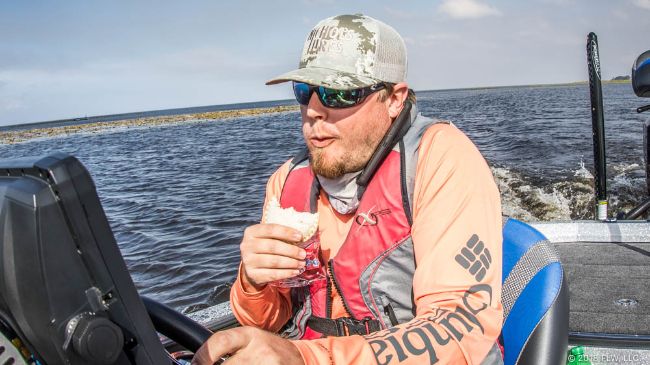 Setzer runs deeper into South Bay to try and determine how far the clean water extends. It quickly becomes obvious that where you find clear water, you also find plenty of boats. Setzer decides to idle back near where he first sat down to make a drift through the hay field. It’s also prime time to eat a sandwich and make a few phone calls. 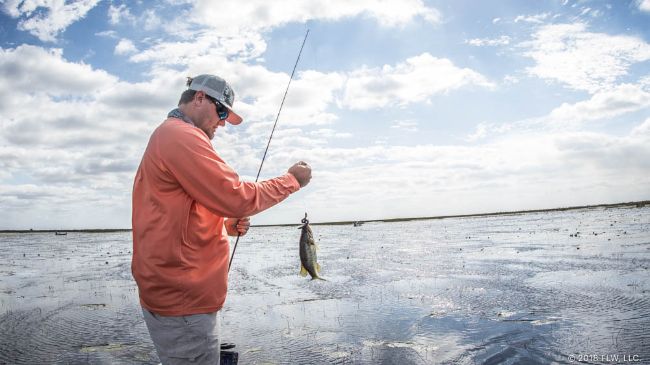 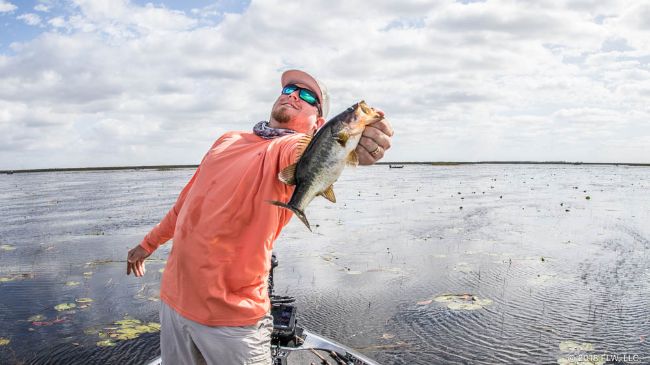 It doesn’t take long for Setzer to get bit once he starts fishing again. Though the fish isn’t a big one, Setzer is more than happy to finally break the ice. He finishes the drift once he hits some dirty water, gets only one other bite and calls an audible. It’s time to make a run. 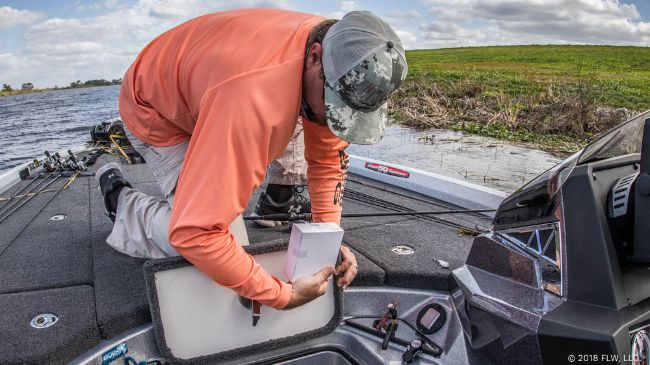 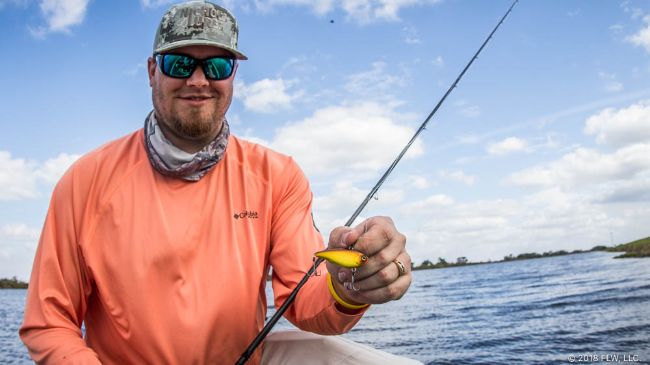 Setzer weaves his way from South Bay back into the rim canal. In some places the water is muddier than it was on the outer edge of the grass, and that is rare. Usually the rim canal stays clean because it is so well protected from the wind, but it’s obvious that the hurricane took its toll last year. Setzer keeps running closer to Clewiston before stopping along the edge of the canal to make a few casts.

He digs around, sifting through several boxes of Yo-Zuri baits before finding what he’s looking for – a gold shiner-colored Yo-Zuri Rattl’n Vibe that looks like a tasty treat for a bass.

The rim canal is usually a great place to scrounge out a small limit and get bites, but the dirty water is making it tough. After a few minutes with no takers, Setzer decides to call it and run back to the ramp to make a move. 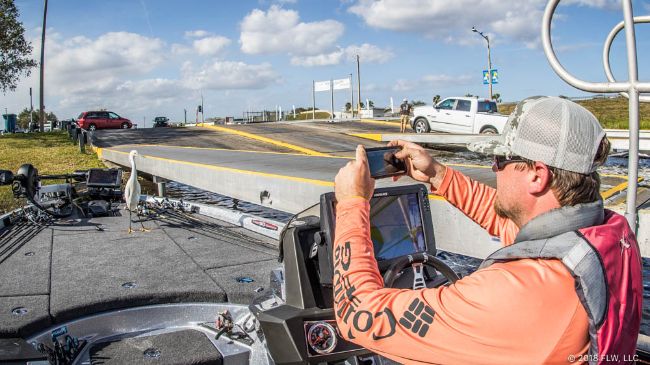 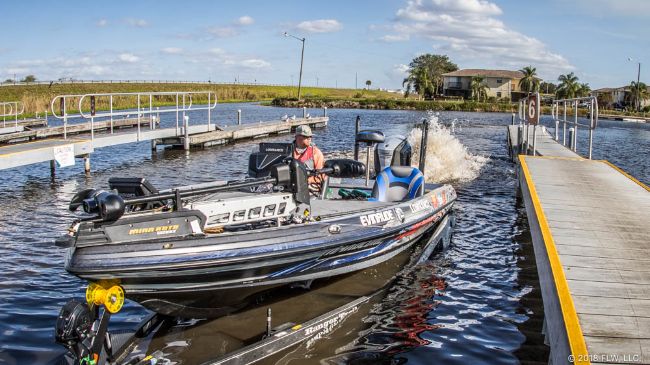 It’s early afternoon when Setzer idles back to the dock, where a friendly bird drops in looking for a snack. It’s a prime photo opportunity for both Setzer and me, and we welcome it.

The plan is to load the boat and go launch up north for the rest of the day. Setzer spent some time up that way on Sunday and wants to look around some more to help formulate a solid game plan for the final day of practice.

He’s seen a little bit of what he likes, but more importantly he has scratched a lot of water off his list. It’s obvious that Okeechobee is far different this time around, but Setzer knows he has plenty of time left to pick up more pieces of the puzzle.