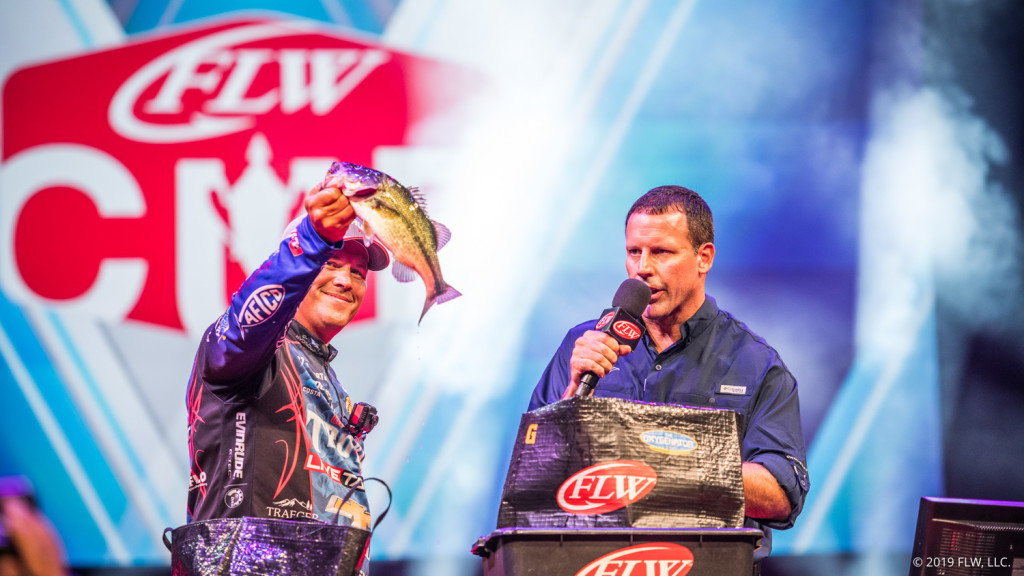 Prior to practice, Scott Martin had no idea that the far upper end of Lake Hamilton, where the cold waters from the bottom of Lake Ouachita flow in through Blakely Mountain Dam, was such a drastically different mini-fishery within the reservoir. Then he started scouting it in practice and realized there was potential to win the tournament in the tailrace in areas where the water temperature was below 60 degrees.

In fact, the tailrace held enough quality bass that Martin and Dakota Ebare were able to share water and still finish in the top five. Martin weighed in daily limits of 11-9, 11-1 and 8-8 for a three-day, fifth-place total weight of 31-2.

“My vision of winning this tournament was being patient, and just being calm, and one-two punching it all day long,” says Martin. “I felt like I was going to have five opportunities every day to put me in a chance to win. That’s basically what happened. 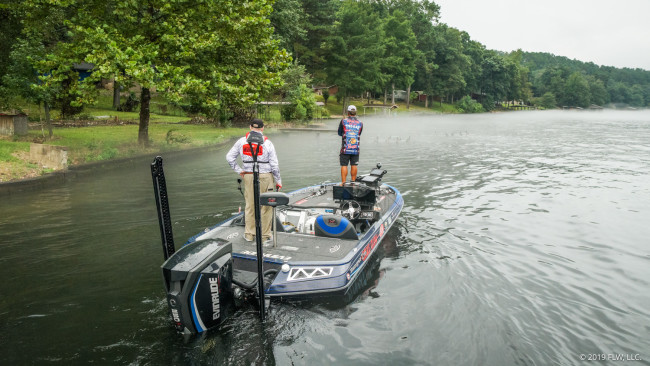 The one-two punch that Martin referred to was combining finesse worms with glide baits to pick apart high-percentage target areas.

“I had a spinning rod in my hand all week, skipping a Googan Baits Slim Shake on a weightless hook,” says Martin. “I would mix it up a little bit. When the current would get strong I’d put a little weighted wacky on as well. It was kind of the same thing as Dakota was fishing – little current breaks and seams.”

The key was skipping the bait far up under docks or into laydowns where the bass were holed up to get out of the current during the heaviest flow periods.

“Those fish would be way up under those docks where you wouldn’t think one would be, and your line would go tight,” says Martin. “Several of those fish I caught on 10-pound P-Line, I mean, I was worried that I wasn’t going to be able to get them out, but I could get them out through all those trees and the docks.”

Martin’s glide bait pattern was primarily focused on floating docks and on targeting wolf packs of bass. He says it was important to rotate baits each day because once the fish saw one glide bait, they weren’t as likely to react to it again. Martin used a Duel Hardcore Twitch’n Ninja Glider and River2Sea S-Waver 168, along with a custom bait he borrowed from Andrew Upshaw.

“They were staging under floating docks – certain ones, but not all of them – and I’d let the bait get down to about 2 feet, just out of sight a little bit,” Martin says. “Speed and cadence were important; finding the right cadence to get those fish to react. Otherwise, they’d just follow your bait the whole time. Also, playing the current. In certain places it’d be really, really strong. In other places there’d be little eddies or current breaks where the current wasn’t as strong. But for the most part what I was fishing was current breaks, inside grass lines, docks, wood.”

The only time Martin strayed from the tailrace was the morning on day two, when he spent about an hour throwing a buzzbait around docks. Otherwise, dialing in on a unique area of the lake worked. 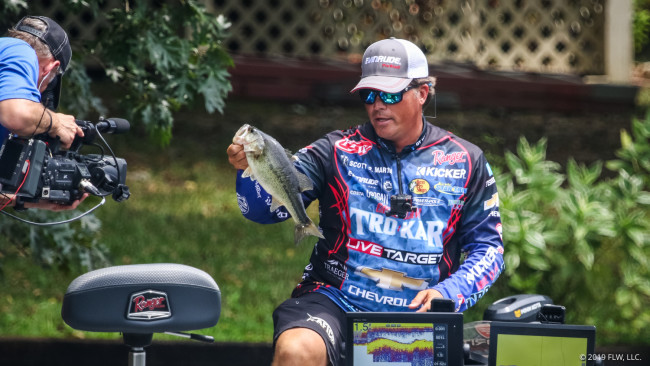 What’s interesting about the tailrace is that the fish weren’t hard to find. The water is clear enough that they could be easily seen. Some anglers wrote off that water from the start because they assumed there wouldn’t be quality bass hanging out in that cold, flowing water. Martin and Ebare were the exceptions. They realized the potential living in that coontail-infested, bluegill-rich water.

Getting the fish to bite meant not applying typical summertime tactics, but instead treating it almost like springtime.

“The water, for the most part, in a certain section up there pretty much stays 58 degrees all year long,” Martin says. “They would react to glide baits. They would react to finesse tackle and swimbaits and clear-water kinds of baits; not prespawn, but what you’d use a different time of year.

“If you come down the lake where it’s 90-degree water, they’re not going to touch a glide bait. You go up there throwing a prop bait and buzzbait, you don’t catch them. I think that’s why a lot of guys didn’t figure it out.”