AOY UPDATE: Butler Takes Over at the Top 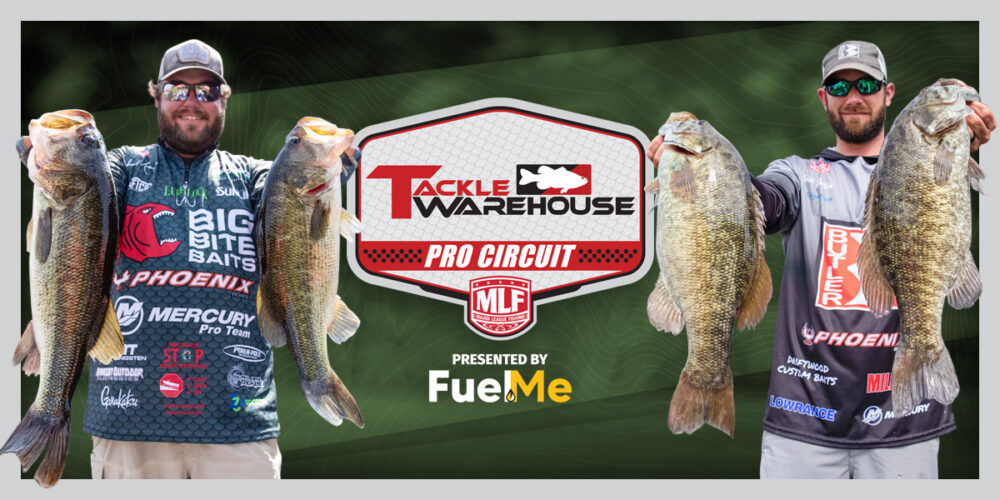 With one regular-season event left for the Tackle Warehouse Pro Circuit Presented by Fuel Me pros, Josh Butler has edged ahead in the Angler of the Year race. A sophomore pro, the Alabama native is on the cusp of a career-defining achievement, and narrowly in front of reigning AOY Michael Neal.

Going into the fifth event of the season at the James River, Butler was 12 points behind leader Spencer Shuffield. Unfortunately for Shuffield, a disastrous 86th place finish dropped him off the lead, and likely out of contention for AOY. Sitting in sixth now, Shuffield is still in great shape to qualify for the Bass Pro Tour, but his AOY dreams will require a near-impossible set of circumstances to make happen.

While Shuffield exiting the race undeniably robs it of some juice, the chase for the points title at the season finale on Lake Champlain is still likely to be tense. The last time the season ended at Champlain, David Dudley won his fourth title after entering the event trailing John Cox by a single point, and his victory wasn’t official until the end of weigh-in on Day 3. This year, it sure looks like we could be headed to a similarly dramatic finish at the northern bass fishing playground.

Leading the way into the season-finale, Butler has put together by far his best season of fishing ever, making few mistakes along the way and never finishing below 55th and earning two Top-10 finishes so far. Now, he’s 14 points ahead of Neal and two or three days of fishing away from the biggest title of his young career.

I’m excited, we did what we had to do,” said the Hayden, Ala., pro of his James River finish.  “Spencer [Shuffield] kinda stumbled, but others didn’t. I didn’t have a slam dunk finish at the James, but I stayed consistent. At the end of the day, we just have to go catch ‘em at Champlain. If I finish in the top 14, I can’t be beat. Michael [Neal], you know he’s going to catch them up there, no doubt about it, but at the end of the day, if I can take care of business, it’ll either work out or it won’t.”

The fact that Neal is on the roll that he’s on has colored the entire Angler of the Year race. This year, he’s already booked four Top-10 finishes, which is double what he had when he won AOY last year.

“Michael Neal is probably the hottest angler on the planet right now,” said Butler. “Hell, if it weren’t for him catching just one fish at Pickwick, he’d probably be 100 points up right now and we wouldn’t even be having this conversation.”

Still, the consistency Butler has displayed is admirable, and it’s that sort of steadiness that wins points titles. Butler is also leaning into it, having pre-practiced for the James and seen it pay off.

“I was fishing Wards Creek, and I actually found it in pre-practice. I caught some fish there, and I went in there Monday and saw how many fish were really in there. And some of the places were sketchy to run, and I was able to get familiar and get some good tracking lines and get some experience on the body of water,” he said. “I plan on going up [to Champlain] maybe around July the 4th, and try and idle and look for rock piles. If I was to go up there right now, probably every fish is on the bank, and I would get sucked into that.”

Having grown up around high-level fishing in Alabama, Butler has a deep base of knowledge. So, though he’s only a sophomore on tour, he’s not entirely surprised that things are going so well.

“I’ve always known I could do it if I put the time in,” he said. “I’m not saying I’d win AOY or contend every year, but I knew I could compete. Coming from Alabama, there are so many guys down here that could do it. you fish the ABTs, hell, half the field could probably fish professionally if they wanted to.”

As far as the prospect of actually hoisting the trophy, there’s nothing Butler wants more right now.

“It’d mean the world,” he said. “If you asked me if I’d rather win an event or AOY, it’s AOY hands down. There’s not a lot of people that can say they’ve won it, and you’ve got to catch them every day to win it. it would be huge; it would be very special.”

More the “Real Deal” than ever these days, Neal is in the midst of a historic run, marred only by catching just one keeper on Day 2 at Pickwick. Still, despite finishing 105th at the first Tennessee River event, not missing the Top 10 the rest of the time has the Tennessee pro very much in the hunt to join Dudley and Andy Morgan as the only pros to win an FLW Tour or Pro Circuit AOY back-to-back years.

“I go into every season with winning Angler of the Year being the No. 1 goal, but you have to be realistic, it’s not possible every single year, there’s just no way,” said Neal. “To win back-to-back years, and join the company of Andy [Morgan] and [David] Dudley, that would be something that not a whole lot of people have done, and definitely a big career achievement.”

As for Champlain, Neal could be in good shape, having finished 18th in last year’s BPT event at the same timeframe and really come into his own as a smallmouth angler lately.

“That’s another like the James, where you can really mess up pretty bad,” he said. “It’s hard not to have a limit there most of the time, but everybody is going to have 13 or 14 pounds, and you’ve got to figure out a way to set yourself apart from that, and it’s not easily done.”

Of course, it may actually be pretty easy for Neal, or, it may look easy, because lately, he seems to be able to pull a 4-pounder out of his pocket at will.

“It’s just like you can’t do anything wrong, besides Pickwick, which, everything I did there was the wrong thing,” said Neal of his run. “Having the confidence that whatever changes from practice, you’ll still be able to figure something out and catch fish. That’s the difference between the past two years and before. To have a year like [Josh Butler has] had, all that stuff has to go right, you have to make the right decision like 90 percent of the time. I’m sure he’s got the same feeling I’ve got.”

Could Someone Else Pull It Off?

Behind the frontrunners, Justin Lucas and Jacopo Gallelli are tied by points with 863 apiece, just 33 points behind Butler. Then, in fifth place, Mitch Crane has accumulated 857 points, with Shuffield in 6th with 847. Barring truly terrible fishing from the top four, Crane and Shuffield are probably out of the running at this point – there are simply too many variables to overcome. However, both Lucas and Gallelli have an outside chance at the title.

Perhaps the most interesting thing about Lucas and Gallelli is their recent success on Champlain, as both finished in the Top 10 in last year’s BPT showdown. Gallelli went south for largemouth, and Lucas stayed north and crushed smallmouth with a spinning rod, but they both have the history on the fishery to make things hard on the leaders.

Still, second-place Neal is 19 points up on the duo, which means they’ve got a very steep hill to climb. It seems likely that one of them will do well enough at Champlain to keep everyone in suspense on Day 3, but finishing that far ahead of Neal and Butler will be a tall task.

Top 10 in the Standings After the James River