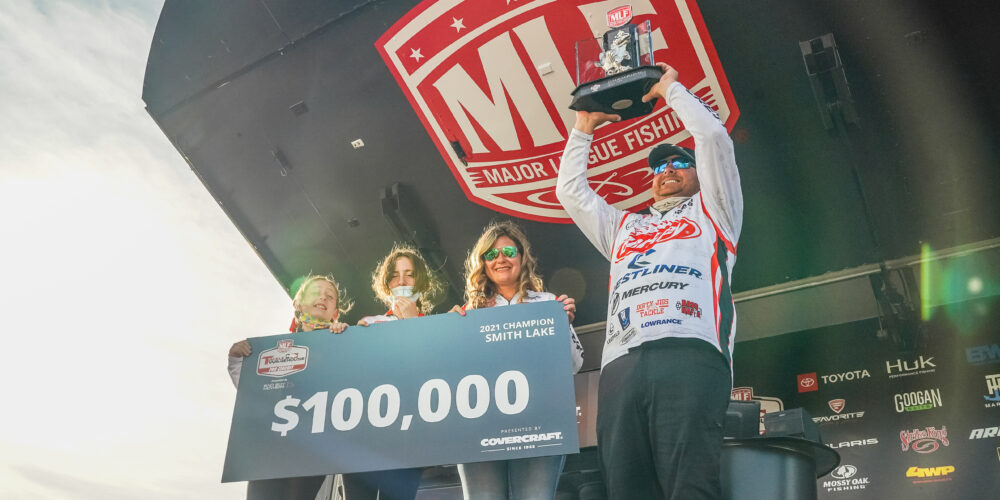 CULLMAN, Ala. – It seemed like it was only a matter of time. Then again, with everything that had happened to John Cox at Smith Lake in the past, he never knew if it actually would.

Today, “it” finally happened. Today, he finally got the win after being so close so many times.

With some late heroics to seal the deal, the DeBary, Florida, pro brought in 16 pounds, 10 ounces to take home the win at the second Stop on the Tackle Warehouse Pro Circuit with 62 pounds, 4 ounces total.

“I really wanted this one so bad,” Cox admitted.

Considering his history on Smith, it makes sense.

His previous two tournaments at Smith resulted in runner-up finishes, but it was a 2015 event that he feels was his best chance at the win. While most everyone was targeting spotted bass in the main lake, Cox had keyed in on a pattern far up Ryan Creek that was producing some giant largemouth, and it was primed to explode with the conditions on the final day. Unfortunately, he never got to find out just how good it could’ve been, as he was thrown from his boat on the final morning and didn’t complete the day.

That tournament, in particular, ran through his head a lot today.

“I actually had a few breakdowns on live,” Cox said. “I was hitting some spots that I’d fished in the past and caught fish off in the past, and it made me think of everything.”

That specific area he’d keyed on back in 2015 was actually a little too clear for his liking – in previous tournaments it was truly muddy water – but much of the pattern remained the same. From Day 1, he put a black-and-blue Dirty Jigs Swim Jig teamed with a Berkley PowerBait MaxScent Meaty Chunk in his hands, put the trolling motor on high and swam that jig in and around every piece of shallow cover he could in the pockets and creeks far up Ryan Creek. He threw the jig on a 7-foot, 6-inch heavy Abu Garcia Fantasista Premier rod and an Abu Garcia Revo EXD 8:1 reel, which he says made a big difference when the fish surprised him and he needed to pick up the slack.

And he needed every little bit of help, considering just how few bites he was getting.

“I’m so burnt out from fishing hours and hours with nothing,” Cox said. “So many times, I’d think I needed to change something; change colors or change baits. But if they’re ready, they’d eat anything.”

Unfortunately, as much as the conditions seemed to be lining up for Cox to do what he does best (sight-fishing), he restrained himself all week because he never quite felt it was the right move.

“I almost went to the dam to sight-fish so many times,” Cox said. “I saw some beds, but I didn’t see fish in them or the ones I saw were really spooky. I wanted to do it, but I just made myself stay away from it. I felt they were making beds, but there weren’t any eggs down.”

That obviously was the right call, as many pros were burned trying to sight-fish. But it was a late gut feeling that truly sealed his revenge victory today.

Coming back into weigh-in, Cox was actually idling his way to check-in when he realized he had 7 minutes left to fish. That’s when he called an audible.

“I was feeling sick because I could feel it wasn’t enough [weight],” Cox said about his late-day thinking, which was spot on as Spencer Shuffield was unofficially within ounces of him. “I knew someone was catching them. So, I pulled over to this pocket and fired my jig right down the drain. And a 4-pounder came out and hit it but didn’t get it. So, I killed it for a second and she ate it.

“If I was going to win [a tournament on Smith] something magical had to happen. That was it.”