Cox on Top of Smallmouth Slugfest at the St. Lawrence 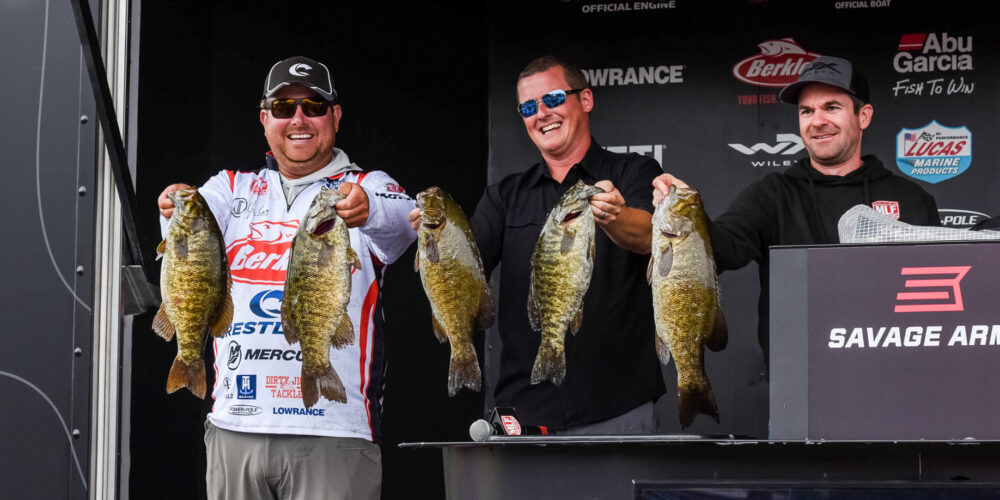 Catching 24 pounds, 12 ounces of smallmouth in a day is a big deal. That’s a once-in-a-lifetime bag for most. The type of bag that should’ve put distance between John Cox and the rest of the field by a decent margin.

It didn’t. Not even a little. Welcome to the St. Lawrence River.

While Lake Ontario often steals the show for tournaments in the area, Day 1 of the Tackle Warehouse Pro Circuit Presented by Bad Boy Mowers event showed that the river is hardly a slouch in terms of quality.

So, circling back to Cox, yes, he had an incredible day; the best day of smallmouth fishing he says he’s ever had. However, it’s just a day here, and he knows it, especially since it was so unexpected.

“It’s crazy,” Cox said. “Both days of practice, I was like, ‘This is the worst practice I’ve ever had.’ Day two was so bad I loaded up at noon, went back to the hotel, took a nap, and then came back out at 5 and got a couple more bites.

“I don’t know why today was so different. I really just wanted to catch five because you don’t want to not catch five at this place. And I caught seven and they were just all big ones.”

If this story from Cox sounds familiar, it should. The man rarely has good practices and often finds things on the fly. Yet, it’s a pattern that routinely works for him, which should worry the rest of the field.

Take today. He says he saw some fish just swimming around in an area in practice but didn’t think they were big. Turns out, they were, as he caught two 5-pounders almost back to back. He also had a point he really wanted to find from previous events but couldn’t seem to locate it in practice. Well, he finally remembered which one it was, and sure enough, he caught two more giants off it.

To that last point, though, history wasn’t necessarily all too kind to him.

“I didn’t catch anything on any of the areas I fished in the Bass Pro Tour event a few weeks ago,” Cox said. “I tried so hard to make those areas work, but they’re not even the same. Grass has grown in those areas.

“During the BPT, the fish were in long stretches. Now, it’s specific. Like, you had to hit the mark. If you threw and missed it, you wouldn’t get bit.”

So, to recap: The St. Lawrence is putting out giant bags like usual, and Cox is flying by the seat of his pants like usual. Things could get very fun the remainder of this week.

Coming into the event with the lead for Angler of the Year, Michael Neal’s closest competition was Skeet Reese and Cole Floyd. After Day 1, Neal is in eighth, Reese is in 37th and Floyd is mired in 139th. Gaining at least a little ground on basically everyone in the hunt for the title, it sure looks like Neal can bring home the first big win of his career.

“I didn’t think I thought about it that much, the only time I thought about it a lot was my first bite,” Neal said of the AOY pressure. “It was a 3- or 4-pounder, and I got it all the way to the boat and it dove and come off. Angler of the Year was all that was going through my mind at that point. The rest of the day was pretty fun.”

Tallying 21-8 on the day, Neal surprised himself a little, but that it felt pretty good. Weighing in at almost the same time at Floyd and Reese, Neal knows he has a little breathing room now, but having been close enough to smell a win a lot in his career, he knows not to count his chickens yet.

“I won’t feel comfortable until it’s over,” Neal said. “If Skeet and I both are in the top 50 cut, it’s anybody’s game. Tonight I’ll probably get less sleep and have more jitters.”

If he can pull it off, as it looks like he will, he knows it would be big.

“I would consider that a career win,” Neal said. “I’ve been close so many times in tournaments, but you have to be so consistent to win Angler of the Year, I think that’s harder than winning a tournament.”

On the Polaris Rookie of the Year side of things, Clabion Johns is doing exactly what he needs to do to put the wraps on an ROY season. Sitting in 41st after Day 1, Johns put up 17-5 with a mix of some green and brown fish and looks like he can catch another 17 pounds in his sleep on Day 2. With Tai Au in 71st with 15-7, he’s out of the picture unless something stunning happens. Similarly, Justin Cooper and Cody Pike started the event more than 80 points behind Johns, so they’ve got to be feeling good about being in 17th and 18th, respectively, after Day 1, but they’ll need Johns to slip dramatically for the door to open.