How Lawson Hibdon Targets Docks Throughout the Season 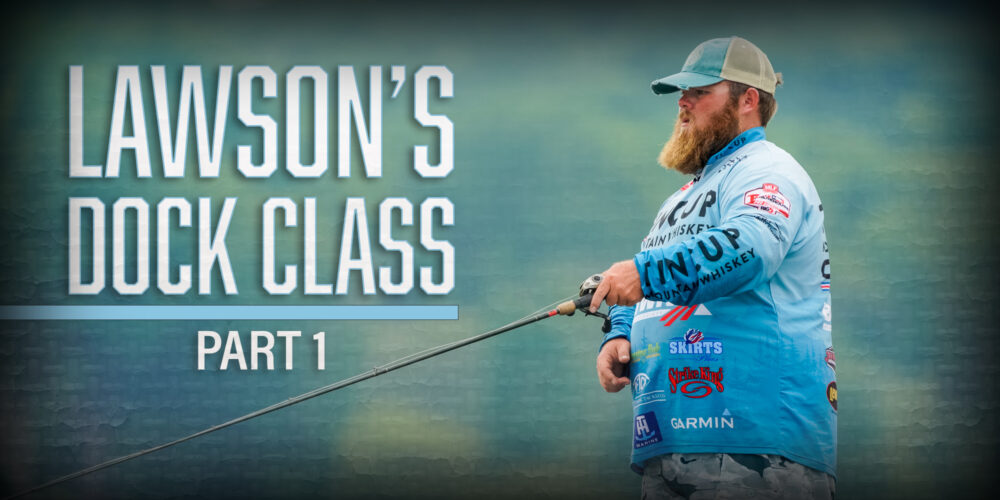 The Hibdon name is synonymous with fishing in the Ozarks, and more specifically fishing floating boat docks. With legendary angler Guido Hibdon paving the way and passing his knowledge to his equally legendary son, Dion, the Hibdon crew has spent years perfecting the art of targeting docks. Now, Dion’s sons are making waves in the tournament world, with Lawson Hibdon being the newest member to join the professional ranks after just wrapping up his rookie campaign on the Tackle Warehouse Pro Circuit Presented by Bad Boy Mowers.

Lawson has spent his life in a boat watching and learning from Guido and Dion. Now, he’s putting what he’s learned to good use. Since Lawson has a little more time on his hands with the tournament season winding down, he decided to shed some light on one of the family’s favorite ways to catch bass – skipping docks.

In Part 1 of this two-part series, Lawson dives into the where and when of fishing floating docks.

It may sound simple enough, but Lawson points out that there are subtle differences in how you should approach a floating boat dock given what page the calendar is on.

“Here in the Ozarks, for sure, a floating dock to me is more about time of year,” Lawson says. “More so than what you think they should be doing. If it’s around the spawn you need to be around gravel or shallower, flatter docks. You don’t want to be fishing the ones that are 75 feet underneath them. And focus more on the walkway of the docks. Normally they’ll have some sort of brace on the walkway of the dock, whether it be a floating piece of foam or a couple pipes sticking down bracing up the walkway. Most of the time that’s where that fish is going to be.”

Once the fish move from prespawn to spawn, they’ll eventually start working their way out of the pockets.

“Postspawn, we move towards docks near points,” he adds. “If there’s poles around the docks, that makes it even better. It seems like around a dock if there’s some structure that’s straight up and down, whether it be a pole or somebody hanging brush piles off the dock, those are perfect in the postspawn.”

As the summer heat starts to set in, Lawson never loses sight of a good dock.

“When you get into summer, those fish still live around the docks and want to be around them because it’s shady and there’s always food around them,” says the Missouri pro. “The bluegill love it, the shad love it; everything loves a boat dock.”

As the days begin to shorten, Lawson gets a little pickier about his docks.

“Breaking into early fall, fish are in transition,” Lawson says. “This is one of my favorite times to fish in the Ozarks because the fish are in transition. You may catch a big one 25 feet deep out off the end of a dock, or you might catch one in inches of water. So you got to know how to pick one apart.

“I look for water color this time of year. My brother, Payden, won the Super Tournament on Lake of the Ozarks a few weeks ago his way. He likes clear water, where I’ll look for some color to the water so I can get up close and personal with them. I finished fourth in that event and we were fishing 60 miles apart.”

“In the fall, fish get out and chase shad and in my opinion, those fish are extremely hard to catch,” he says. “I go for the fish that eat bluegill and the bluegill eaters are pretty stationary and live under the same holes under the dock. They’ll be in the same spot tomorrow, where those shad eaters won’t. If I seen them bluegill up floating around in the shade, that’s where I’m going to focus more.”

Lawson explained that he won’t focus on a particular section of the lake. He’ll simply look out for good-looking docks, which are generally the bigger, shadier ones. That could be on a point or in the back of a creek.

“When the water temps are in the mid-80s to low-70s fish are extremely hard to pattern,” he says. “Fish what looks good and keep on moving. You’ll burn a lot of gas, but you’ll also present your bait in the right scenarios enough to get fish caught.”

“Typically the back third of a creek is where I focus in the wintertime,” Lawson says of where to focus your efforts. “A lot of times people think when you go to a deep, clear lake you got to be on bluffy type stuff in the winter but that cannot be anything further from the truth. We go to the flattest stuff. It may be a pea gravel bank where your boat is in 6 or 7 foot of water and the docks just heat up quicker in that shallower water.

“Everyone thinks about water temperature in February and March, but they don’t really think about it in December and January because it’s just cold. One or two degrees can make a huge difference then. It may go from 38 to 40 degrees and that can make a world of difference, and that’s what you’ll find a lot on those flatter banks.”

Another consideration for Lawson is wind and whether or not there’s a shad kill.

“If there’s a good shad kill going on, I’ll focus on docks that are in that area,” says Lawson. “Especially when you get a good wind, I like to focus on the docks in the area the shad are dying with the wind blowing into them. Wind more than anything else makes a bass dumber than a rock. They’ll still stand around docks because it’s still a good feeding opportunity.”

One of the errors Lawson sees folks making when it comes to fishing docks is simply not fishing enough of them – or not fishing them quickly enough. On a given body of water, there can be thousands of docks holding bass. In a perfect scenario, Lawson would skip as many as he could.

“Normally, the initial fall in there is when you’re going to get your bite,” Lawson says of skipping under a dock. “It’s a lot like flipping a mat. You see a lot of guys flip in a mat, hop it once or twice and bring it right back out. We’ll, a boat dock is no different. Normally they’ll eat it pretty quick. Every now and then there are times you have to drag it all the way back out, but I’m going to cover 10 times the amount of water versus the guy dragging the jig all the way back to the boat after each skip.

“I see people picking a dock apart more than they should. On a typical Lake of the Ozarks boat dock, most of them are two boat slips, 20 to 30 feet deep and have a good walkway coming out to them. By the time you skip a couple of boats and throw under the walkway a few times, you’ve pretty much covered that boat dock. If I make 10 casts, that’s too many. I feel like three, four or five casts I’ve pretty much covered it and if he’s there he’s seen my bait. I watched my Grandpa Guido do it, and he’s one of the slower fishermen on the planet. He was a firm believer that you don’t want them getting too many looks at your bait.”

Like Guido believed, less is more when it comes to fish getting a look at your bait. For Lawson, technology has only helped prove that theory.

“Forward imaging has taught me a lot about how bass react under a dock and how aware they are,” he says. “I could skip my bait under and watch a fish 20 feet away from my bait that heard, saw or felt my bait go in there and he’ll come eat it. I’ve had times fishing docks that are in say 20 feet of water and you skip under every fish that’s there knows your jig is there. Whether they chase it to the bottom or catch one on your first cast. If you keep repeating that and skipping under 10 or 15 times those fish are getting pretty sick of looking at that jig. Now if you caught a few fish after going around the dock, just leave. Come back an hour later and you’ll probably catch another one.”

Stay tuned for Part 2 of Lawson’s tips where he’ll talk about the how-tos of skipping, including selecting a jig and trailer, and why heavier line is better.