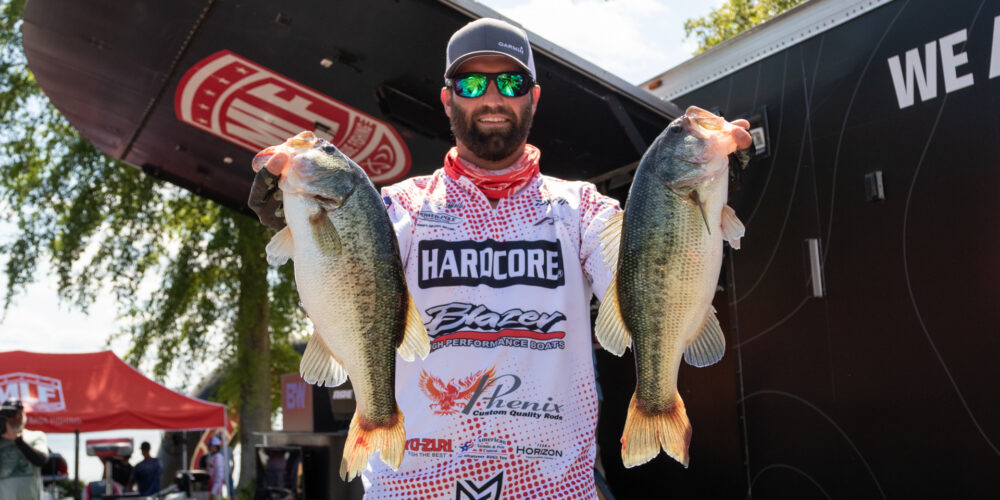 GUNTERSVILLE, Ala. – Guntersville is back. That’s the common refrain from competitors across the 156-angler field of the Tackle Warehouse Pro Circuit Presented by Fuel Me event on Lake Guntersville. The world’s most storied bass fishery has regularly topped the list of the planet’s best bass lakes since the sport rose to prominence in the 1960s; however, recent years have been less productive. If this week’s showing is any indication, the anglers are right.

In two days, 23 five-bass bags with weights of more than 20 pounds have been brought to the podium. From top to bottom, competitors seemed to be boating numbers over the past two days, but only the 50 most fortunate advanced to Day 3 as the cut came for anglers unable to find a big bite in the crowd.

Day 1 leader Spencer Shuffield continues to lead the pack after adding 18-11 to his 25-6 weight from Thursday, good for a 44-1 total. Meanwhile, Oregon angler Lane Olson rode a 26-14 bag all the way from 70th to second place. Defending Pro Circuit Angler of the Year Michael Neal rounds out the top three after tossing 19-7 onto 22-2 from the first day of competition.

Shuffield returned to the hot spot that produced a monster sack yesterday to quickly catch four fish weighing more than 15 pounds. After a brisk early bite, he says the spot shut down, possibly due to wind conditions.

“I fished out around them more than anything,” said Shuffield, who added that he switched to a flutter spoon and a hair jig to target the bass after the crankbait bite he rode on Day 1 shut down.

With one more day of competition before weights are zeroed for Sunday’s championship day, Shuffield sits in the best position in the pack to sail through toward a 10-man, one-day derby for $100,000 (or more).

“I can go catch 13 or 14 pounds a hundred times over in the shallows,” he said. “As far as catching a big bag, I am going to have to do that on ledges. I have four places where I feel like I have the potential to catch over 20 pounds off. I want to make it to Sunday because I feel like I will have those places to myself, pretty much.”

Shuffield doesn’t plan to fish his offshore hot spots on Day 3. Instead, he says his game plan is to keep the pressure off of fishing shallow to catch enough weight to advance.

“Then on Sunday, hopefully, I can lay the hammer down,” he said.

Olson’s Rocket Ride to the Top

Lane Olson’s offshore fish weren’t there this morning. That turned out to be a good thing for the 21-year-old Oregon pro. After arriving to a no man’s land, Olson found a productive school of bass about 300 yards from their location on Day 1. Relying on a reaction bite to trigger strikes between 15 and 16 feet, Olson boated a monster limit that propelled him close to pole position.

“I honestly didn’t expect that,” Olson admitted. “I thought I could catch 18 (pounds) if I got the right bites, and they just grew up a little bit.”

For Olson, who spends more time on the Columbia River than the Tennessee River, the South’s most legendary bass fishing waterway presents a unique set of challenges. Whereas power is constantly being drawn from the Columbia, he says Tennessee Valley Authority (TVA) dams aren’t always pulling current. Today, the dam at Guntersville began to pull more, which he says opened up the bite and set the fish up better for anglers that could locate them.

Olson says Guntersville’s legendary schools of big bass are still in transition, though. He believes more are moving to offshore areas daily, but isn’t prepared to rely on the same fish he found today to be there in the morning of Day 3.

“I’m fishing offshore and they are moving around a bunch,” he said. “The schools that are there today might not be there tomorrow. I may not find a single school tomorrow. I feel like the ones I am catching are roaming.”

Headed into Day 3, Olson plans to keep the hammer down to make it to Championship Sunday.

Michael Neal continues to deliver on expectations despite being unable to capitalize on a school of monsters. Neal says he covered about 75 miles of water each day en route to a 41-9 total that has him less than a pound away from second place and within one solid keeper of first.

“I caught way more fish today but I didn’t have any of those 5-pounders like I did yesterday,” Neal said. “I had one 4-pounder. I have to get another big bite or two tomorrow.”

Neal is fishing the midsection of the lake and says most of his fish are coming from areas about 10 feet deep. However, he says the fish could set up differently on Day 3 and he will need to find them again to hang around the top five for a guaranteed place on Sunday.

“You have to at least shoot for that top five so you don’t undo yourself and miss the Top 10,” Neal said. “These fish are moving out by the hour. I don’t know how far they are going. They are going as far as they can go. I have caught some in the main river channel itself, but how deep that movement goes, I can’t say.”

McDonald’s View from the Bubble

Seasoned pro Bill McDonald has more than two decades of top-level bass fishing experience on his side but slid from the Top 10 on Day 1 to become the last man in the cut on the second day. McDonald’s 32-7 sits more than 5 pounds out of a spot on Championship Sunday, but with weights zeroing for the final round, he still has a shot at the $100,000 payday and massive points bump awaiting this tournament’s winner.

“I had 19-9 on the first day, but today was disastrous,” McDonald said. “I lost fish. I missed fish. I broke fish off. It wasn’t a real good day, but tomorrow is a new day. If I’m fortunate enough to make the Top 10, it’ll be a squeak-in deal like I did today. But in this situation, where the weights zero, I have a shot.”

McDonald says he has been able to locate fish each day by focusing on intercepting bass in transition.

“There is a big transition going on and fish are moving out there,” he said. “We still have a few spawning though, so I’m focusing on the mid-range.”